Diagnosis. Caenotropus schizodon   is readily distinguished from C. labyrinthicus   and C. mestomorgmatos   by its bifid premaxillary ( Figs. 2 View FIGURE 2 , 3 View FIGURE 3 ) teeth vs. unicuspid teeth that are pointed or blunt distally. Additionally, C. schizodon   differs from C. labyrinthicus   by its distinct midlateral stripe extending from the snout to the base of the caudal fin vs. a diffuse midlateral stripe in most individuals of the latter species. Caenotropus schizodon   differs from C. maculosus   by the absence of teeth in lower jaw vs. the presence of dentition in most individuals, in having the distal portions of the anterior distal-fin rays dusky vs. having a distinct patch of dark pigmentation in that region, and 28–30 (n= 18, m=29.0) lateral-line scales vs. typically 27, rarely 28.

Etymology. The specific name, schizodon   , from Greek words schize for divided and odons teeth, is in reference to the bifid premaxillary teeth present in the species.

Comments. Vari et al. (1995), following Géry (1964), synonymized the genus Tylobronchus Eigenmann (1912)   (type-species: T. maculosus   ) with Caenotropus   . The main argument was the wide variation they found in different populations with respect to the presence of teeth in the lower jaw, a principal diagnostic character given by Eigenmann to differentiate his new genus from Caenotropus   . Although the proposed synonimization is not invalided, the authors overlooked Eigenmann’s statement (1912: 271; 272) about the presence of bifid premaxillary teeth in Tylobronchus   (= Caenotropus   ) maculosus   , which is an important differential character for the species. Recognition of Tylybronchus would render Caenotropus   non-monophyletic.

The characters, all translated from Vari et al. (1995) - the well-developed process on the lateral surfaces of pterotic anterodorsal to the pterotic articular process (46), the very well-developed canal system in the middle and dorsal portions of the angulo-articular (47), the dorsal extension of the supracleithrum along the posterior margin of the posttemporal (49), the curved, anteriorly shifted postcleithrum (51), and the horizontal elongation of the terminal scale of the lateral-line series (52) - are common to C. schizodon   and its congeners. The others three characters, 45, 48, and 50 require additional discussion.

Character 45 of Vari et al. (1995) is the reduction of the sixth infraorbital to an ossified tube that surrounds the associated laterosensory canal. Caenotropus schizodon   has a pronounced laminar bone ventrally associated with the laterosensory canal segment. Such a laminar bone occurs in proximate outgroups of the Chilodontidae   and Chilodus   (see Vari et al., 1995: fig. 1).

Character 48 of Vari et al.(1995), is the pronounced development of the anterior process of the metapterygoid resulting in the elimination of the metapterygoid-quadrate fenestra, and the development of an interdigitating joint between the anterior metapterygoid process and the proximate portion of the quadrate. Caenotropus schizodon   shows different degrees of this character. While the character is present in MCP 16953 View Materials (48.86 mm SL), in another specimen examined ( MCP 30101 View Materials ; 75.86 mm SL) the metaperygoid extends to near the quadrate, but there is no contact between them and, in consequence, no interdigitating joint exists. It may be considered an ontogenetic difference.

Character 50 proposed by Vari et al. (1995) is the posteriorly directed process that arises from the posteromedial surface of the dorsal portion of the supracleitrhum. Caenotropus schizodon   lacks this character. The results above indicate that characters 45 and 50 are homoplastic conditions and parsimoniously interpreted as autapomorphies not exclusive to C. schizodon   .

Va ri et al. (1995) have proposed that C. maculosus   is most closely related to C. labyrinthicus   . In this analysis, including C. schizodon   and the bifid dentition character, C. schizodon   would be the sister species of C. labyrinthicus   . The presence of teeth in the lower jaw (59), the spot of dark pigmentation within the midlateral stripe on the body (60), and the reduction of the dark pigmentation in the dorsal fin (61), traits that were considered autapomorphics of C. labyrinthicus   by Vari et al. (1995), are now reinterpreted as synapomorphies defining the lineage formed by those two species. The hypothetized clade C. maculosus   , C. schizodon   , and C. labyrinthicus   is defined by 3 synapomorphies: bifid teeth (regression to a primitive condition in C. labyrinthicus   , hence simple teeth is autapomorphic to this species) and characters 54 and 56 of Vari et al. (1995), respectively, the posterior extension of the subopercle into a distinct process extending posterior of the limit of the opercle and the ossified laterosensory tube between the middle caudal-fin rays posterior of the elongate terminal scale of the lateral line ( Fig. 4 View FIGURE 4 ).

We are grateful to Osvaldo Oyakawa ( MZUSP) and Helmut Wellendorf ( NMW) for the loan and information about specimens in their care, Richard Vari, U.S. National Museum of Natural History, for information on C. mestomorgmatos   and corrections and suggestions on the manuscript, and to the staff of the Centro de Estudos em Microscopia Eletrônica e Microanálises ( CEMM PUCRS) for assistance. The photograph of the holotype, Fig. 1 View FIGURE 1 , was taken by Aloísio Braun. Financial aid for the expedition where the new species was collected was provided by the PRONEX project “Conhecimento, conservação e utilização racional da diversidade da fauna de peixes do Brasil ” FINEP /CNPq grant 661058 / 1997 - 2). 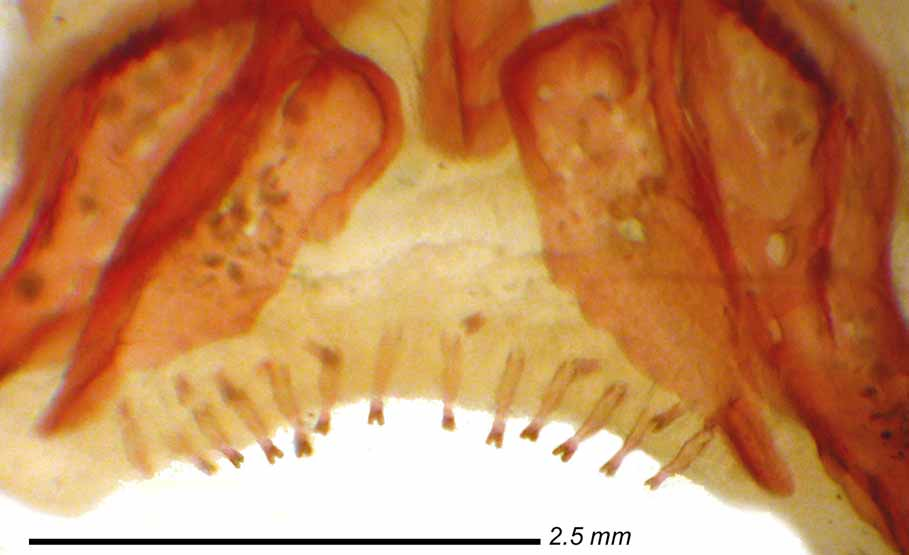