Diagnosis: The shape of the posterior telopods easily identifies this species as another member of the alluaudi   ­species group. Z oosphaerium villosum   sp. nov. features unique characters, which separate this species unambiguously from others in the group. Tergites and anal shield are densely covered with short hairs, each hair inserting in a small pit ( Fig. 9b View FIGURES 9 ). Harp on male telopods with two stridulation ridges and the tips of the 3 rd joint of anterior telopods rounded ( Figs. 12a–d View FIGURES 12 ). Furthermore, the shape of the first sternite and shape of the male gonopore differs in Z. villosum   from other species of the genus ( Figs. 10a View FIGURES 10 , 13a View FIGURE 13 ).

Head: with some long hairs and numerous setiferous pits mostly around the clypeus and lateral of the eyes. Some long, isolated hairs around the eyes and more distributed on the entire head. Posterior margin of head towards collum with a patch of very short hairs. Edges of antennal socket each with little crenulated teeth and a single short spine.

Tergites: anterior paratergite depression densely covered with hairs and several ridges. Tips of paratergites project posteriorly. Tergites covered with numerous small pits ( Fig. 9b View FIGURES 9 ), some of them with a single hair inserting at the center, giving the body in some specimens a furry look. Posterior margins of tergites with a visible fringe of short hairs, originating from the underside of posterior margin of tergites, the endotergum.

Legs: tarsi of first leg pair with only three to six, second pair with only five to eight ventral spines, claws only weakly curved and without an apical spine. Tarsi of the following legs with 8–11 ventral spines, curved claws and one apical spine. Coxae of all legs covered at the inside margin with a patch of long hairs, the following leg joints with some isolated, long hairs as well. 9 th pair of legs without coxal lobes and spines. All legs feature a crenulated ridge on the femora ( Fig. 9c View FIGURES 9 ).

Sternite: First sternite with a sclerotized ledge ( Fig. 10a View FIGURES 10 ) and long lobe, the latter reaching towards the beginning of prefemur and curved towards the leg pair. Anterior margin irregularly rounded with one small invagination near the tip, covered with long, isolated hairs. Posterior part of the sternite bald ( Fig. 10a View FIGURES 10 : S = sternite). Sternites three and beyond with a spine like process which reaches almost the stigma opening of the next anterior sternite.

Anterior telopods: with three joints distally of syncoxite, inner margin of first joint with ‘harp’ consisting of one long and one short stridulation ridge, long ridge very strong and regular, curved centrally towards middle of the body, beginning on the posterior margin and ending just in front of the anterior margin of first joint ( Fig. 12a View FIGURES 12 ). Posterior side of second telopod joint at the inside with a projection, which reaches up to half the length of the third joint ( Fig. 12b View FIGURES 12 ). The apical part features round sclerotized spots ( Fig. 12c View FIGURES 12 ). The third joint long and well­rounded, tapering distally, posterior side with large membranous invagination covered with few sclerotized spines, one of them extraordinarily big. Border of invagination with up to 11 sclerotized black teeth positioned juxtaposed the round sclerotized spots of the second joint ( Figs 12b–d View FIGURES 12 ).

Posterior telopods: chela of very specific shape. Third joint very broad, the membranous concavity extending over only a part of the anterior margin. Four nonsclerotized spines, basal spine big, two smaller spines in the middle and a fourth spine on the distal end of the membranous invagination. Posterior side of third joint with oblique sclerotized teeth restricted to the membranous invagination. Immovable finger of second joint thin, but as long as movable finger. Inside of immovable finger invaginated, with round sclerotized knobs juxtaposed the tip of the membranous field of the movable finger (third joint). Remarkable is one short spine on the anterior side near the base of the immovable digit. Base of second and third joint densely covered with hairs, apically almost hairless. Syncoxite and first joint almost hairless. Tips of inner horns of telopod coxa with terminal portion of inner lobe bent posteriorly more than 25 degree. Subanal lobe densely covered with hairs ( Figs 12e–f View FIGURES 12 ).

Distribution & Ecology: This species, belonging to the six largest sphaerotheriid species of the world, is only known from the small littoral forest of Toamasina, and may be endemic in this area. Ecological data, not yet available, may shed light on the function of the dense hair coverage on the tergites of this species. The hairs may have sensorial functions or may keep dirt particles away from the body of the animal. Such suggestions may indicate euedaphic and burrowing habits of this species. Behavioral observations can elucidate the function of the extraordinarily big movable finger of the posterior telopods. The dissected female, collected in the middle of April 1996, did not contain eggs.

Conservation: The fate of this species is dependent on the future of the littoral forest fragment near Toamasina, where the specimens were collected. No other collecting sites have been recorded for this species thus far. All recently published records indicate a very fast destruction of the scattered remaining patches of littoral forest on the east coast of Madagascar ( Dumetz 1999, deGouvenain & Srilander 2003). These large­bodied millipedes play an important, albeit understudied role in the decomposition cycle (Ashwini & Sridhar 2003) and millipede populations will have to be carefully monitored if planned reforestation with endemic plants is to be successful.

Intraspecific variation: The lack of material precludes examination of intraspecific variability. The three males show identical formed telopods. The paratype selected for SEM shows a unique feature in sphaerotheriids, his antennae has seven joints before the small disc carrying the sensory cones. 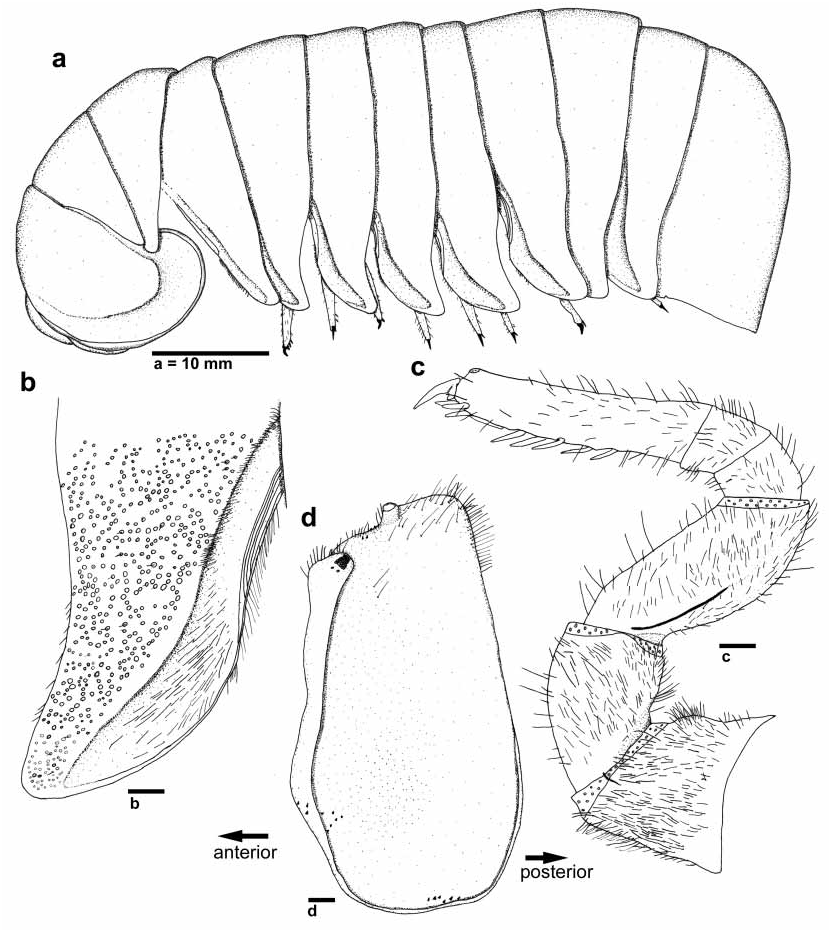 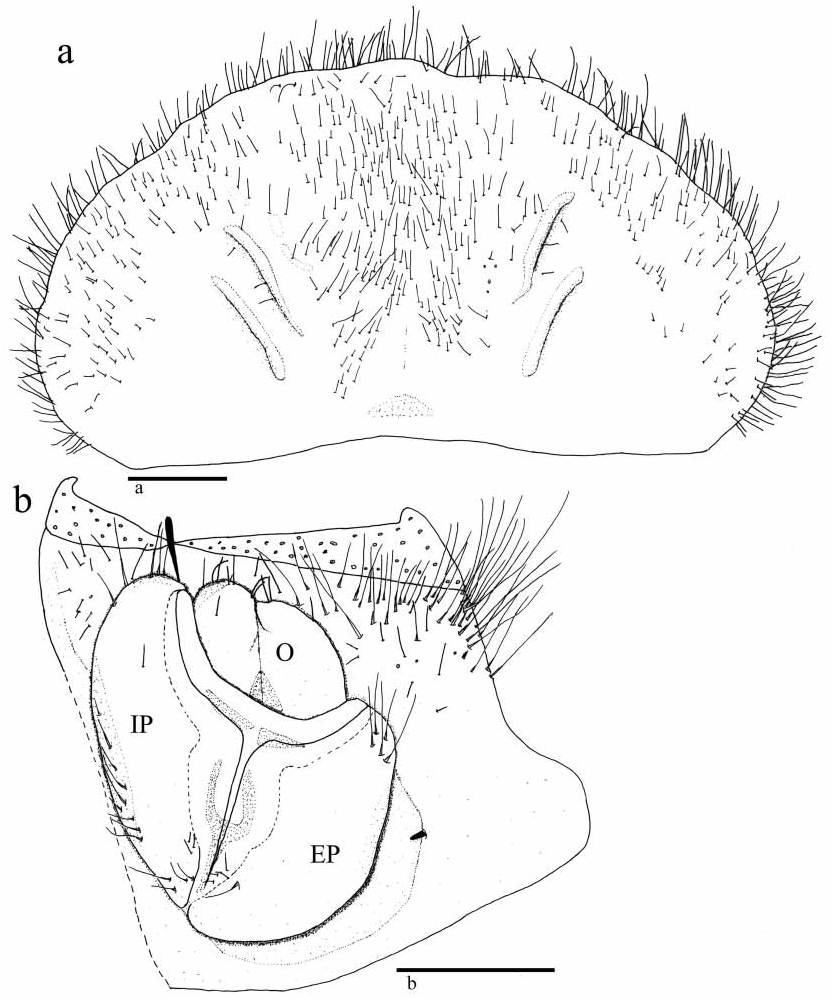 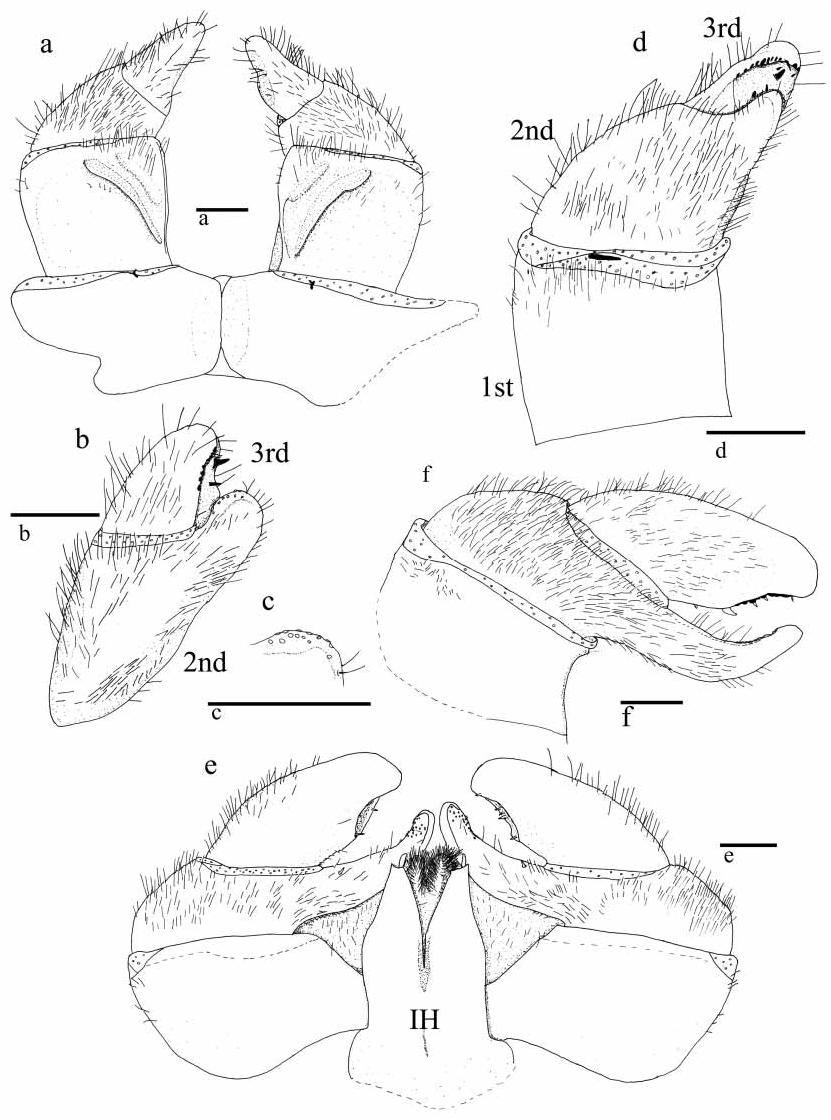 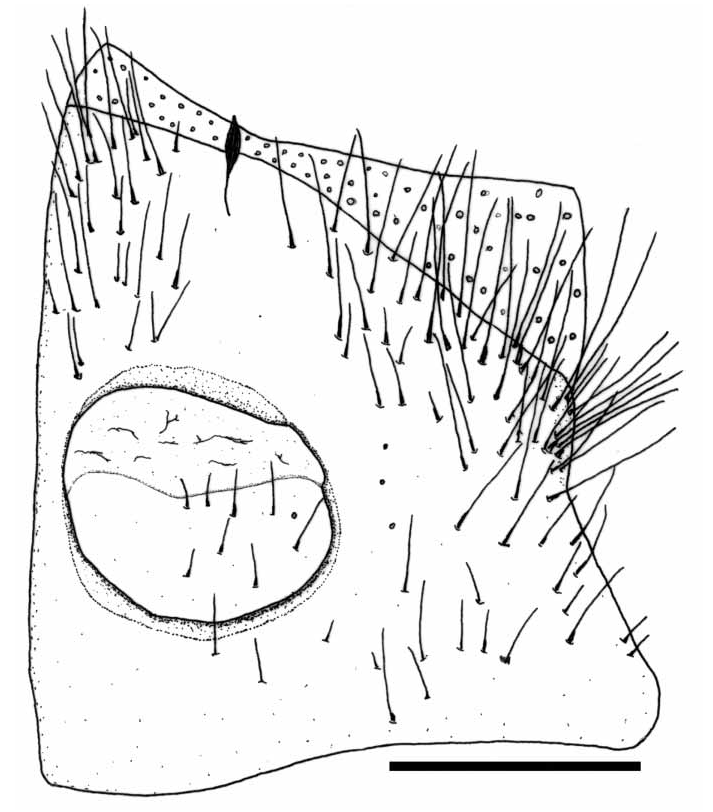