Diagnosis. This species is superficially very similar to Protolychnis species   , but the male genitalia of the new species distinctly differ by having a pair of uniquely specialized, upwardly curved processes arising from base of each valva ( Figs 1D, F View FIGURE 1 ). A polygonal signal plate in the female genitalia can also be a diagnostic character when compared to Protolychnis species   having a crescent signal plate ( Fig. 1G View FIGURE 1 ). It can also be separated from the following new species, Viperinus pyknoistus   by the shape of cucullus and processes at base of the valva: 1) the cucullus is broader than that of V. pyknoistus   ; 2) the process has a snake head-shaped distal part, whereas in V. pyknoistus   , it has a broadened distal part.

Thorax: Thorax and tegula dark brown. Forewing slightly broadened distally; ground color dark fuscous uniformly, with a distinct orange-white spot surrounded by blackish scales at apical end of discal cell; blackish elliptical spots well-developed at basal 2/5 across the wing medially, instead of antemedian fascia; costa slightly arched beyond 3/4; apex obtuse; fringe concolorous with ground color; venation ( Fig. 1B View FIGURE 1 ) with R 1 arising from before middle of discal cell; distance between origins of R 1 and R 2 about 1.6 times longer than that of R 2 and R 3; R 3 shortly stalked with R 4+5; R 4 and R 5 stalked beyond 1/2, R 5 reaching near apex; M 1 remote from R 3+4 at base; M 2 well-developed, nearly parallel to M 1; M 3 arising from near lower corner of discal cell; CuA 1 and CuA 2 shortly stalked for about basal 1/7; 1A+2A narrowly forked at base; cell closed. Hindwing broader than forewing, brownish gray; termen slightly concave medially; venation with M 2 absent; M 3 and CuA 1 stalked for basal 1/5; CuP weakly developed, arising from near base of hindwing.

Etymology. The species name is derived from the Latin, orbis (= circle) with a Latin suffix, - osus, referring to the arched process at the base of valva in the male genitalia. 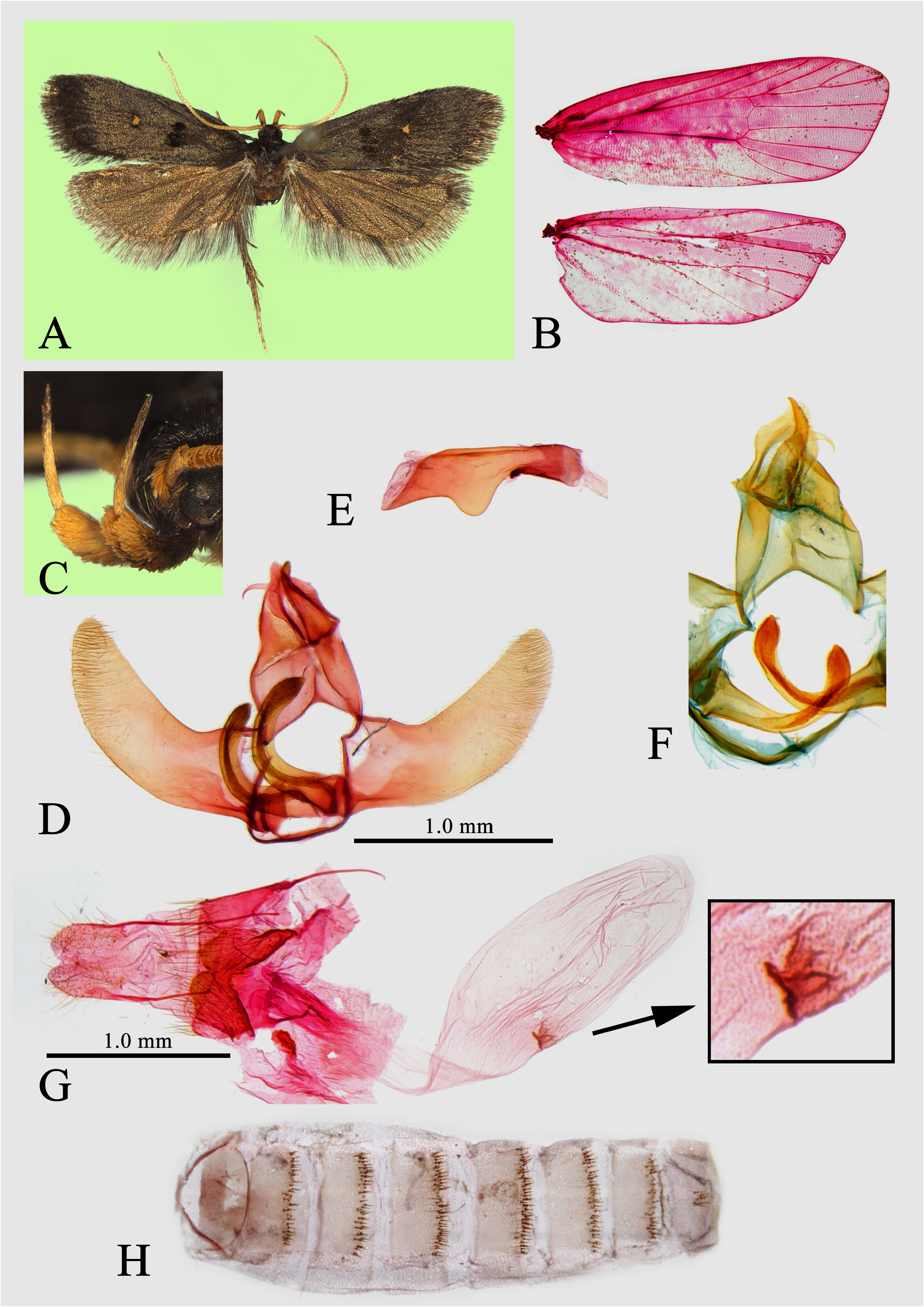