Supplementary description. Adult habitus. The head is brown, with an indistinct M-line, tentorial callosities on the clypeus pale, a pair of narrow transverse, and yellow marks above the lateral ocelli and small black spots inside ( Figs. 13View FIGURES 13–15, 23View FIGURES 23–26). The interocellar area has a large, tire-shaped yellow spot that widens anteriorly and is open posteriorly, an almost square, pale-brown spot is present anterior to the median ocellus and a vague M-line. The occipital area bears a transverse yellow band that extends along the epicranial suture ( Figs. 13View FIGURES 13–15, 23View FIGURES 23–26). The submental gills are short. The pronotum is brown, with a large median yellow band that occasionally includes a thin brown stripe along the median pronotal line and two thin incomplete brown stripes laterally ( Fig. 13View FIGURES 13–15). The lateral arms of the mesofurcasternum reach the posterior corners of the furcal pits, with dark beak-like spots at the inner edges of each furcal pit, a dark brown transverse suture occurs on the mesosternum that is unclear and incomplete anteromedially. The abdomen is covered with colorless clothing hairs ( Figs. 13, 14View FIGURES 13–15), and segments 1–3 are divided by a pleural membrane laterally. The pleural folds on segment 4 are vague, and the other segments are undivided. The legs are yellow with brown bands ( Fig. 13View FIGURES 13–15). Dorsally, the femur has a dark brown band that widens basally closer to the inner margin, while the outer margin is pale. The tibia has a dark brown band in the basal quarter ( Fig. 13View FIGURES 13–15). The cerci are bicolored, each segment with a narrow yellow band basally and a wide brown band distally ( Fig. 13View FIGURES 13–15). The color pattern of the female is similar to that of the male, with the exception that the interocellar spot is nearly closed posteriorly while the pronotal median band is narrower and widest posteriorly ( Fig. 23View FIGURES 23–26).

Sternum 8 is brown in the anteromedian half, and a pair of oblique dark brown lateral sclerites surrounds a pale subgenital plate anterolaterally ( Fig. 24View FIGURES 23–26). The subgenital plate is bilobed, large, extending almost half the length of sternum 9. The posterior margin has an U-shaped notch that separates two large lobes with almost straight inner angles. Sparse, tiny, dark setae form a field at the base of the U-shaped notch ( Fig. 24View FIGURES 23–26).

Note. In our material that was collected at an altitude of 2,300 –2,400 m, F. wusuensis  males had a darker, more contrasting body color pattern, especially on the pronotum, than the holotype. This may be due to the maturity of the adults as well as differences in environmental conditions (increased ultraviolet radiation, decreased temperature, etc.) compared with the type locality at 1,700 m above sea level. On the other hand, the male described in our material is identical to the holotype of F. wusuensis  in its pale color pattern on tergum 10, location of the sensilla basiconica on terga 8–10, cylindrical shape of the naturally everted EPL, and small papilla at the tip of EPL ( Fig. 19View FIGURES 16–22). In general, the penial armature is similar, but in the male described from our material, the aedeagus is turned out more than in the holotype; therefore, the membranous lobes are more distinct. Females from fresh material were similar to Chen’s (2019) paratype. They had a similar color pattern on the head, pronotum, and shape of the notch on the bilobed subgenital plate, with almost straight inner angles as in the paratype ( Fig. 24View FIGURES 23–26). The collar on the egg in the paratype appeared to be present but was poorly visible due to use of a low magnification and lack of scanning electronic imaging, making it impossible to compare the features of the сhorion structure.

Distribution and ecology. The distribution of F. wusuensis  is limited to the Eastern Tien Shan and was first described in China, in the Xinjiang Uygur Autonomous Region, Wusu City, and Bayingou River located in the Eastern Tien Shan. Our specimens were collected in the streams of the neighboring locality, in Bogdo-Ula and Karlyktag Ridges. Filchneria wusuensis  inhabited mountain streams at altitudes of 2,300–2450 m above sea level, including those fed by glaciers ( Figs. 35–37View FIGURES 33–37). Adults were found in July. 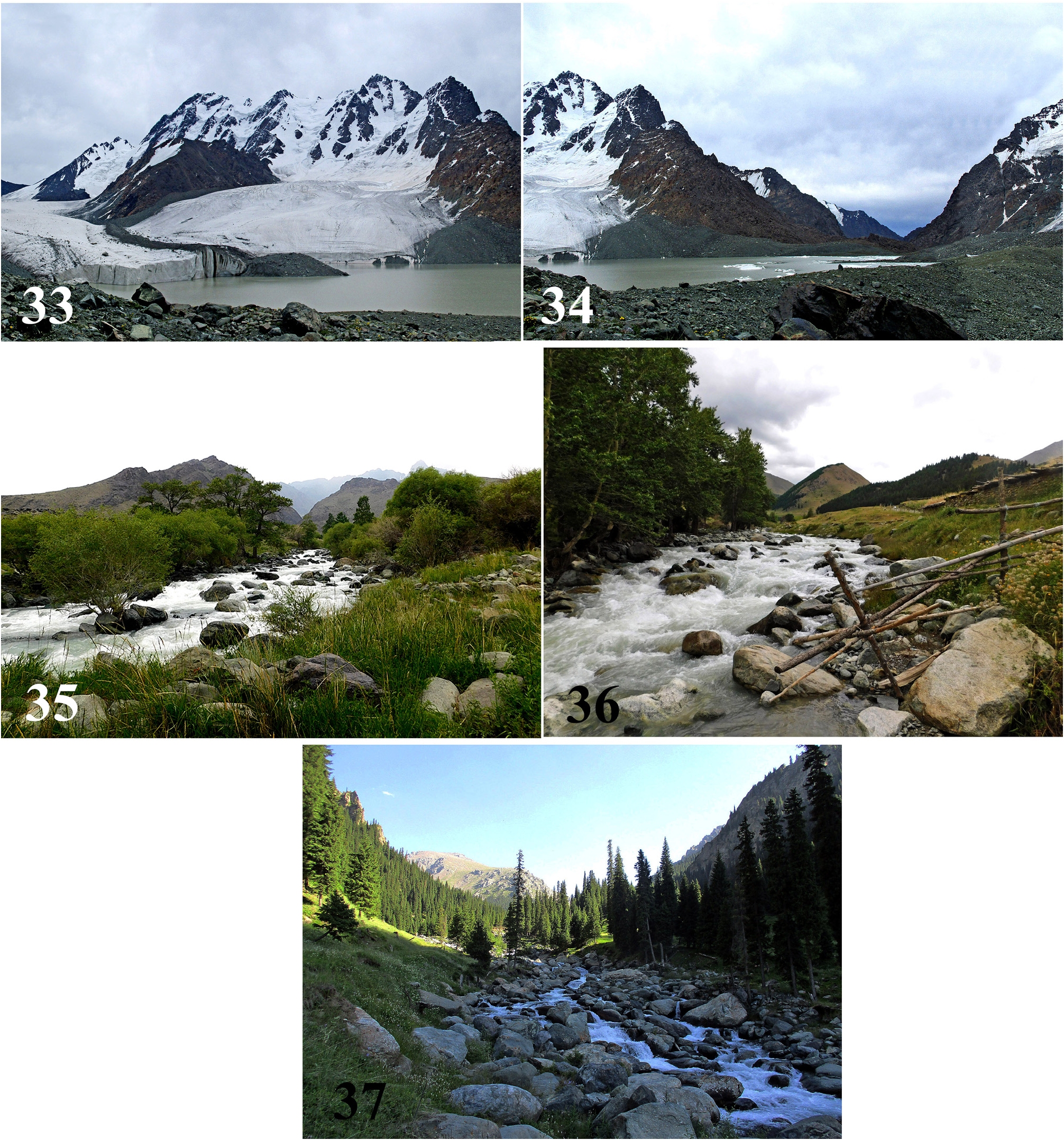