Diagnosis:— Distinguished by its robust, clustering habit, the sheath with fine, easily dislodged spines and dense, grey or brown indumentum, a well-developed, fragile ocrea, and the long inflorescence with conspicuous funnel-shaped bracts on primary branches and pistillate rachillae (staminate material not seen).

Distribution:— Known from two adjacent localities along the road to Pindiu in the foothills of the Saruwaged Range, NW of Finschhafen.

Notes:— Calamus nanduensis ( Fig. 8 View FIGURE 8 ) is distinguished by its robust, clustering habit, sheaths with numerous, very fine, easily dislodged spines and dense, grey or brown indumentum (also present on other organs), a welldeveloped, but fragile ocrea, and its long inflorescence with conspicuous funnel-shaped bracts on primary branches and pistillate rachillae (staminate material has not been seen). In its inflorescence morphology and the presence of an ocrea, it bears some resemblance to some members of the paired fruit group ( Dransfield & Baker 2003), especially C. pholidostachys Dransfield & Baker (2003: 381) , though C. nanduensis does not bear paired fruit. The presence of funnel-shaped bracts is also shared with C. sashae though the inflorescence of this species is more robust. The sheath armature C. sashae and C. pholidostachys is entirely different to that of C. nanduensis , being very robust and borne in partial collars rather than needle-like and solitary.

The presence of a well-developed ocrea and funnel-shaped rachilla bracts is also shared with C. pseudozebrinus Burret (1935: 319) and C. womersleyi . Like C. nanduensis , C. pseudozebrinus bears fine, needlelike and readily detached spines, although they are arranged in collars, rather than solitary. The inflorescence of C. pseudozebrinus is robust, but the primary branching systems are relatively short, the largest being around half the length of C. nanduensis with much smaller rachilla bracts. Calamus womersleyi is a smaller rattan overall, distinct in this group on account of its smaller leaf with irregularly arranged leaflets, short, truncate, strictly sheathing ocrea, and its more slender inflorescence and primary branching systems.

The epithet refers to Nanduo village near the type locality in recognition of the warm welcome and support that the villagers provided the first author and his colleagues during the field trip on which the type material was collected . 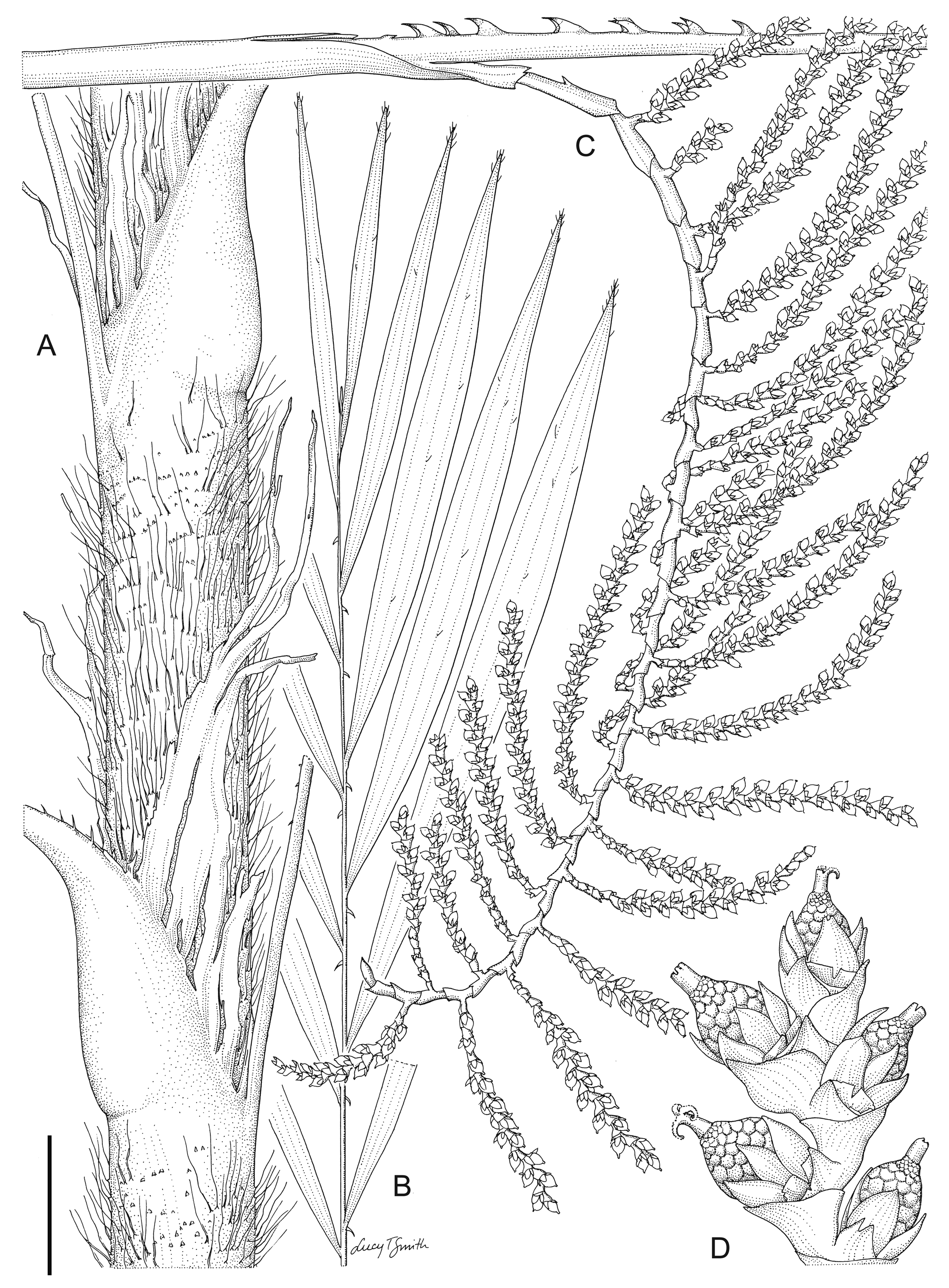