Diagnosis:— Distinguished by its moderately slender stem with well developed, inflated, persistent, clasping ocreas and the rather short, erect to arching inflorescence that bears stout, inflated bracts, which split to the base by the emergence of very compact primary branching systems.

Distribution:— Known only from three records on the south side of the Owen Stanley Range in Central Province of Papua New Guinea, 40–100 km NW of Port Moresby.

Habitat:— Lowland to lower montane rain forest from 50 to 460 m above sea level.

Notes: — Calamus barfodii ( Fig. 2 View FIGURE 2 ) displays a highly unusual combination of characters. It bears a well developed, inflated, persistent ocrea that clasps the stem, which resembles that displayed by Calamus longipinna Lauterb. & K.Schum. in Schumann & Lauterbach (1900: 203) and its relatives ( Baker & Dransfield 2002a) or two species in the paired fruit group ( Dransfield & Baker 2003: C. altiscandens Burret [1939: 196] and C. macrochlamys Beccari [1908: 259] ). However, it bears an inflorescence unlike any found in these taxa, which is rather short, erect to arching, and bears stout, inflated bracts that split to the base by the emergence of very compact primary branching systems. In New Guinea, similar inflorescence morphology is known only in Calamus anomalus Burret (1935: 320) , C. essigii Baker (2003: 720) , C. maturbongsii Baker & Dransfield (2003: 725) and C. nannostachys Burret (1931: 264) , none of which produce well-developed, inflated ocreas. The rachillae are also very short, bearing inconspicuous rachilla bracts and solitary rather than paired fruits. We have seen only pistillate material, but it is clear from these specimens that C. barfodii is one of the most distinctive of all the new species described here.

A fourth specimen (Zieck NGF 36187 View Materials [K!, L!]) from a nearby locality close to Tapini at around 1200 m is similar to C. barfodii , but bears a much shorter ocrea, longer spines on the ocrea and sheath, and irregular leaflets that are bristly, rather than almost glabrous. The duplicates seen by us are sterile and cannot be identified with confidence, but the gathering may represent further morphological dimensions of this species.

This species is named for Dr. Anders S. Barfod, palm biologist at Aarhus University, Denmark, who collected one of the specimens of C. barfodii and has contributed greatly to our knowledge of the New Guinea palm flora. 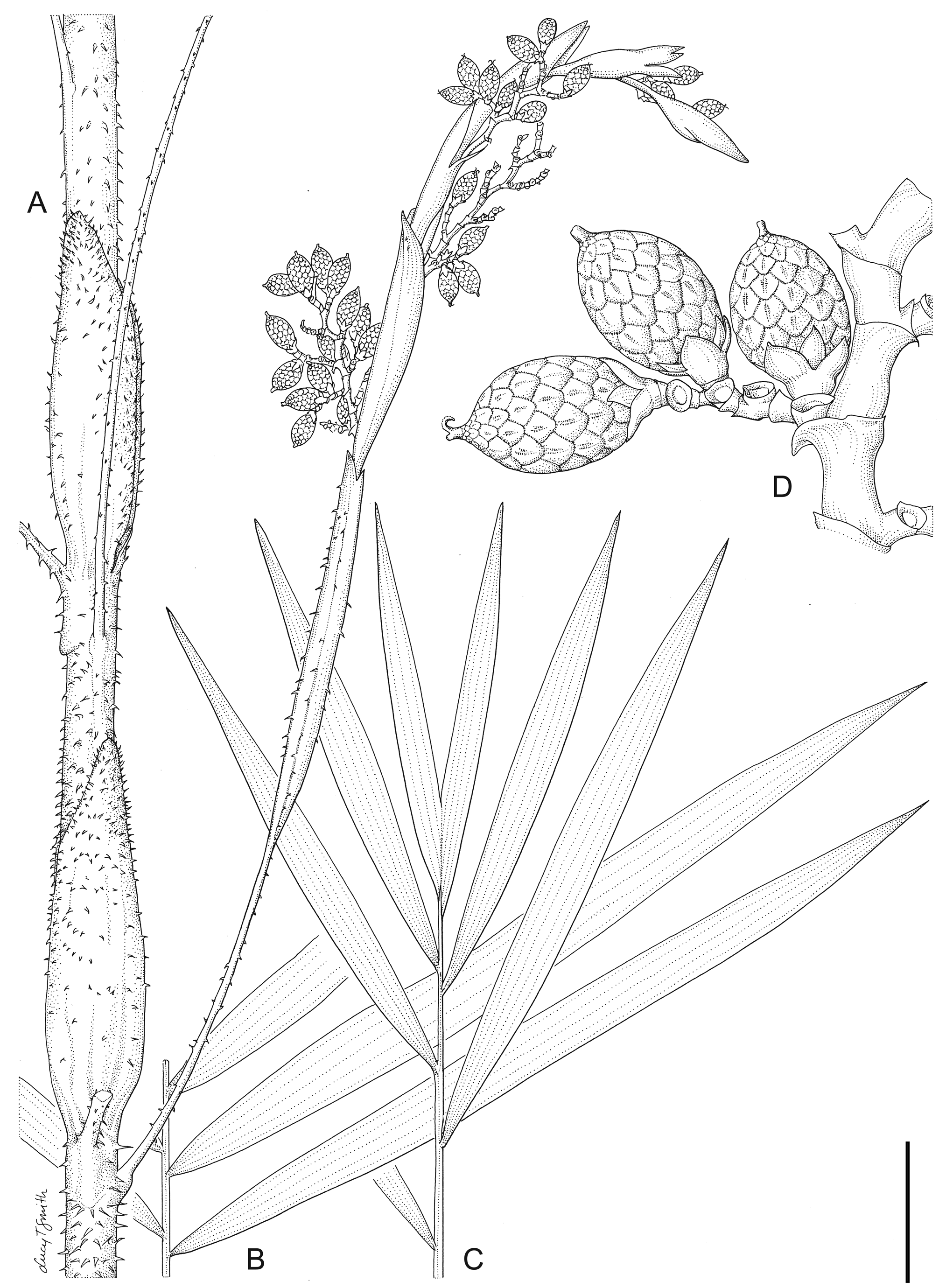