Remarks. The present neotype designation (see above) is based on ICZN § 75.3 and justified as the following qualifying conditions (according to ICZN § 75.3.1–7) are given: the description and the illustration in Koch (1846) definitely allow assignment to the same genus to which other species belong, which have (after 1846) been treated as members of Corythalia since a long time. For example, C. valida ( Peckham & Peckham, 1901) , C. grata ( Peckham & Peckham, 1901) , C. electa ( Peckham & Peckham, 1901) , C. metallica ( Peckham & Peckham, 1894) or C. bicincta ( Petrunkevitch, 1925) have been found to have a quite similar colouration, habitus and somatical characters as C. latipes and were assigned to Corythalia by different authors experienced in salticid taxonomy. Thus, we follow Simon (1901), who regarded the representatives of the genera Dynamius (note: some of the above mentioned species were listed in this genus at that point of time. Additionally that genus held other species, e.g. D. opimus , sharing the main somatic characters with C. latipes , but differing in colouration of the opisthosoma) and (at least a large part of) the representatives of Escambia as being congeneric with C. latipes . He consequently listed the respective species from that time on under Corythalia [the oldest genus name available, after elevation to genus rank by Simon (1901)]. All characters described and illustrated by Koch (1846) for C. latipes are in concordance with the revised diagnosis for the genus Corythalia herein. As marginal note it may be added: the white scales along the margins of the proximal half of the carapace, which are present in most Corythalia species, are not recognisable in Koch’s drawing (see Fig. 5 View FIGURE 5 ), however, they were described by Koch (1846) in the text of the description. Even though the identity of C. latipes as a representative of the genus Corythalia is free of doubt, the identity/definition of the distinct/particular species C. latipes (in comparison to other Corythalia species) is definitely puzzling without an objective reference, meaning an adult male specimen showing all diagnostic characters to discriminate C. latipes from other Corythalia species. In this context the specific structures of the male copulatory organ (i.e. the male palp) are indispensable. As C. latipes is the type species of Corythalia , it is even more comprehensible that its species identity has to be resolved. The original holotype is lost: Stefan Friedrich and Jörg Spelda have intensively searched the collections of the ZSM (even the entomological collections) and could not find it. After intensive search, neither could the curators of the arachnid collections of the natural history museums NHMNB, ZMB, NHMW, NHM, MNHN, OUMNH and NMBE. In most of these institutions the entomological collections (dry and ethanol) were also searched for. The deposition of the original holotype in one of the institutions mentioned above seemed likely, since parts of either the collection of C.L. Koch or that of J. A. M. Perty are hold there. The Corythalia male examined herein and designated as the neotype had been collected in Bahia in Brazil (see above). Its colouration pattern and the main somatic charcters correspond well to the illustration and description in Koch (1846) for C. latipes : body length: 2 2/3´´´ “lignes”/”Linien”, means 6.02 mm if Parisian “ligne” was used (which is more likely) or 5.40 mm if Bavarian “Linie” was used. Carapace dark red-brown, eye region even darker black-brown, behind and between posterior eyes with some patches of light scales, proximal margins of carapace with bands of light (white) scales; chelicerae red-brown, cheliceral fangs short ( Koch 1846). Opisthosoma: dorsally with two large, light beige, procurve lunulate patches in posterior two thirds (within them some fine dark areas) and one narrower light beige, trifurcate patch in anteriormost section (also with darker areas within) ( Koch 1846). These latter aspects only in parts correspond to the present neotype, but it is possible that the specimen Koch had once examined was dried and its opisthosoma shrunken. Legs I and II strong and broad, all legs quite dark red-brown, all legs with long fringe hairs, longest and most conspicuously developed in leg pair III; leg pair III longer than pairs I and II and minimally shorter than leg pair IV; leg tarsi yellow. Palps with similar basic colouration as legs, but with whitish hairs densely arranged on patellae and distal sections of femora ( Koch 1846).

Upon arrival in Nuremberg, where C.L. Koch was working at the time around 1846, the specimen must have been labelled as “ Salticus latipes Perty ” and must have been taken from the collection of Josef Anton Maximilian Perty containing mainly material from South America deposited at the Natural History Museum Munich (ZSM), as Koch (1846) states (see above). A jumping spider species Salticus latipes , however, was never described and published by J. A. M. Perty. It is possible that Perty originally intented to do so, but did not find the time or thought that Koch was more qualified to describe a Brazilian salticid. There is no detailed type locality for the former holotype of C. latipes given in Koch (1846); it is likely that is was once collected in the province of Bahia in Brazil: Perty (1833) described many Brazilian arachnids and, in the context of this study, he certainly collected/gathered a lot more arachnid species/specimens than those actually treated in his study. As type locality for several of “his” species, he listed the state of Bahia in Brazil. It is also most likely that the material was collected near the coast in Bahia, because in the 19 th century regions close to the coast were more often visited by researchers, due to an earlier peopling and a better infrastructure in contrast to higher life risk in the interior.

Intraspecific variation of female copulatory organs. In some females connective ducts are less strongly diverging anteriorly, in others even more.

Distribution. Known only from Bahia ( Brazil). 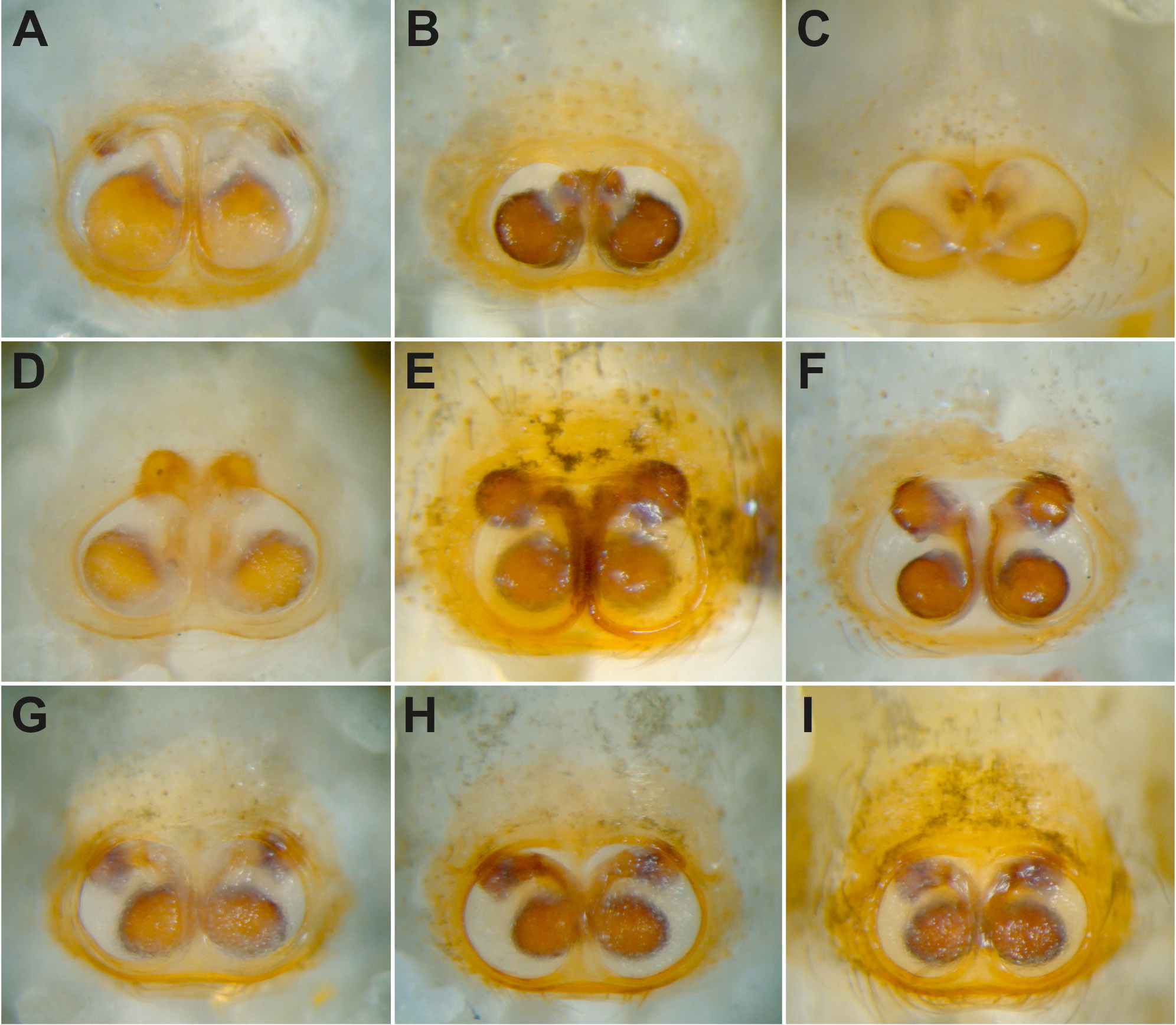