Differential diagnosis. The new species can hardly be mistaken for any other rotifer. Its lobed corona remotely resembles Floscularia (e.g., see fig. 4). The only species of this genus that inhabit an amorphous gelatinous case are F. melicerta (Ehrenberg) and the undescribed Autralian taxon mentioned in Table 1; both of these have a far less complex corona and lack an ovifer. Octotrocha speciosa Thorpe has neither a protruding dorsal corona lobe nor an ovifer, and has strongly differentiated unci teeth ( Fig. 3 View FIGURE 3 ). Sinantherina species have a simple, heart-shaped corona that lies in a single plane.

Animals sessile, either solitary or in small colonies of up to three specimens in a transparent gelatinous matrix in our cultures. Specimens hang down from their attachment point, and retract only slowly and incompletely when disturbed. Larva transparent, with pair of red eyes in under apical field; corona circumapical, coronal lobes indicated by, in frontal view, pentagonal corona. No males or resting eggs observed.

Etymology. The species name gigantea (L., gigas, giant) is an adjective and refers to the, for rotifers, huge size of the species.

Distribution. To date, Pentratrocha gigantea n. gen., n. sp. is positively recorded from its type locality in Australia only. However, it may be more widespread. A glass model of purported Octotrocha speciosa in the American Museum of Natural History, (see Fig. 1.1 View FIGURE 1 in Wallace et al. 2006), shows rotifers with a corona that appears to be provided with a protruding dorsal lobe, as in P. gigantea n. gen., n. sp., rather than a dorsal concavity and an interruption of the corona as in O. speciosa . If this glass model was made from life observations, which is claimed to be the case ( Miner 1931), it cannot be excluded that the artist was working from P. gigantea n. gen., n.sp., or a relative.

Affiliation and comments. Traditionally, diagnosis of genera in the family Flosculariidae relies in part on the shape of the corona, being circular or bean-shaped (e.g., Ptygura ), heartshaped as in Sinantherina , or having evolved into a corona provided with a characteristic number of lobes: four in Floscularia Cuvier , eight in the monotypic Octotrocha Thorpe (see Koste 1978). Pentatrocha gigantea n. gen., n. spec. has a unique corona as described above, which generally resembles Octotrocha , and the species is provided with an ovifer, which, to data, was considered autapomorphic to the genus Sinantherina . Based on these morphological criteria, the erection of a new genus is in order. However, a preliminary analysis of SSU rDNA gene of Octotrocha speciosa , two allopatric populations of Sinantherina socialis , S. semibullata and the new species (P. Weekers in lit.) revealed that the latter falls within the clade formed by the two Sinantherina species , rather than being a sister group of either Octotrocha or Sinantherina , as hypothesized. These data indicate that the new species might be specialized member of Sinantherina , and that the diagnosis of this genus should be emended to refer to the presence of an ovifer as autapomorphic diagnostic feature rather than to corona shape. If confirmed, this may have far-reaching consequences for the systematics and classification of all Flosculariidae , as it, at least, casts doubt on corona shape being a reliable feature for the diagnosis of genera in the family. This of course would have radical consequences for the systematics of the whole group. In the absence of more comprehensive molecular data, we prefer to remain cautious and follow a pragmatic approach by adhering to the traditional taxonomic practice in Flosculariidae .

The new Pentatrocha n. gen. is the largest, most voluminous rotifer on record. With a size of up to 3,500 µm and a corona of almost one millimetre in width, it extends the size range of rotifers considerably. Wallace et al. (2006) report a size range of rotifers of 50 to 2,000 µm, while Asplanchna sieboldii (Leydig) may attain a body length of 2,500 µm, and Collotheca hoodi (Hudson) is reported to have a total length of over 2,500 µm. Also, Edmondson (1945) records a Floscularia conifera (Hudson) of 3,550 µm, but in these species it is the relatively slender foot or foot peduncle that accounts for the large size. Other Sinantherina s are also relatively large, with maximum reported body lengths of 2,000 µm ( S. socialis ) and 2,100 µm ( S. spinosa : see Koste 1978). 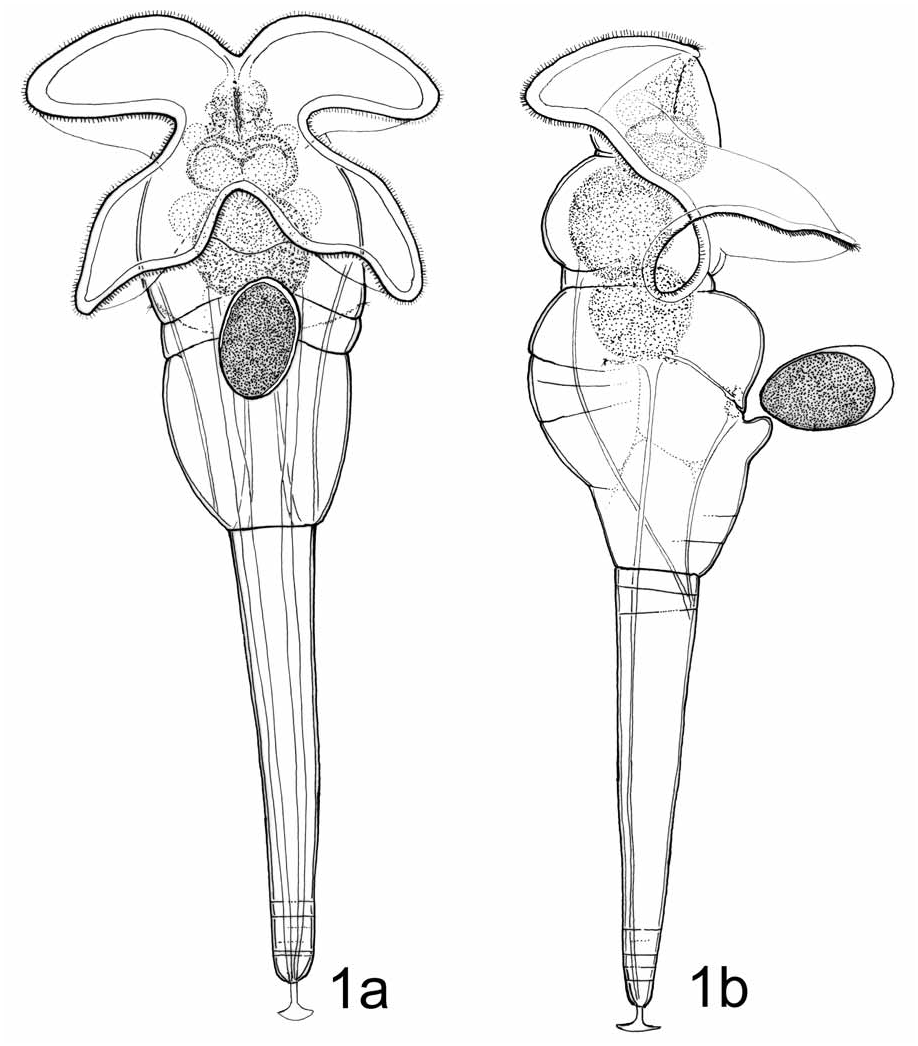 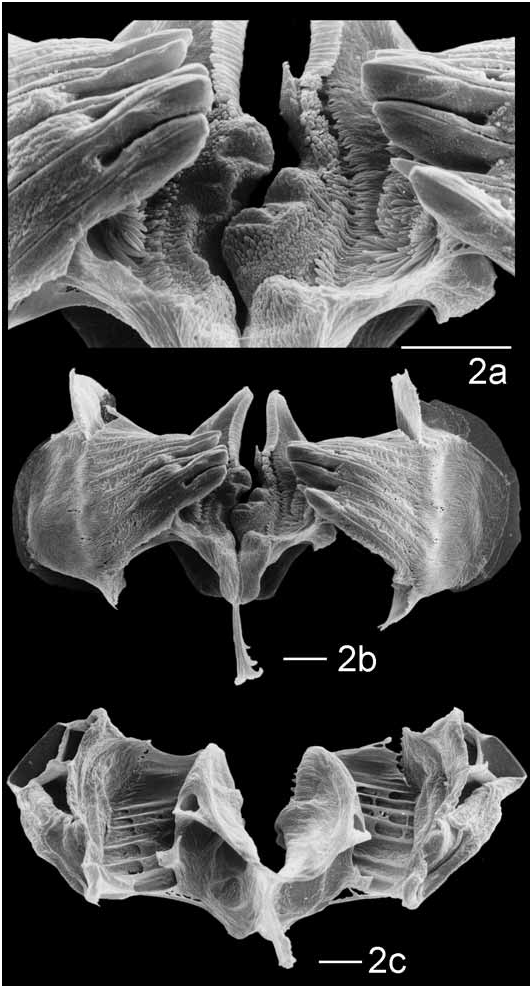 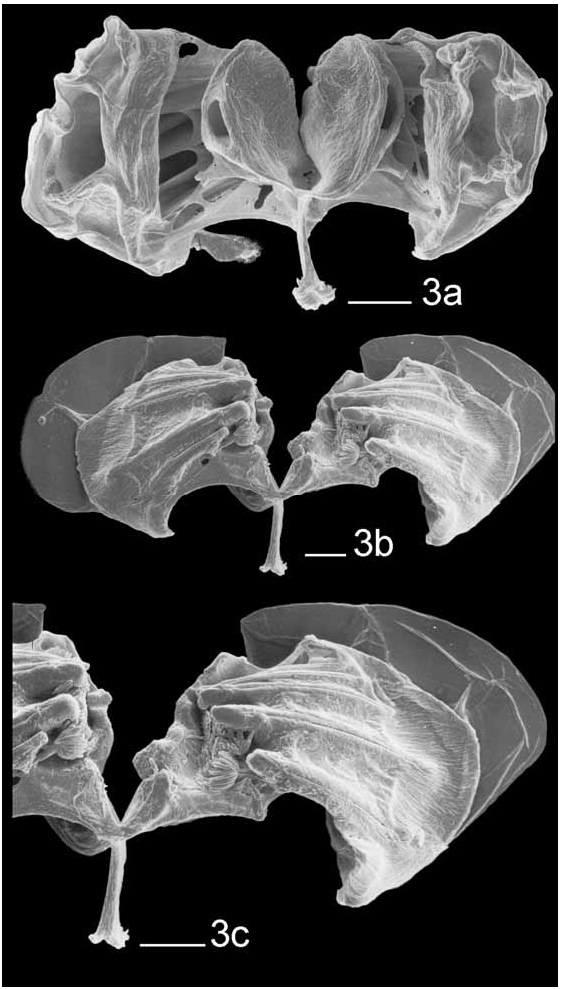