Chemistry: no substances detected by TLC.

Distribution and Ecology: —This species is known from several collections from Costa Rica, Colombia, Ecuador, Bolivia, and Peru. It appears to be a primarily epiphytic species, growing on twigs and branches of trees and shrubs in (upper) montane rain forest and paramo vegetation, where it competes with other foliose macrolichens such as Leptogium spp., Lobariella spp. , and Sticta spp.

Etymology: —The epithet refers to the rough appearance of the surface especially when dry.

Remarks: — Parmasto (1978) and other authors ( Mitidieri et al. 1964; Feige 1969; Oberwinkler 1970, 1984, 2001; Parmasto 1978; Coxson 1987a –c; Fritz-Sheridan & Portecop 1987; Iacomini et al. 1987; Fritz- Sheridan 1988; Hawksworth 1988; Larcher & Vareschi 1988; Wolf 1993; Lange et al. 1994; Piovano et al. 1995; Thomas et al. 1997; Azenha et al. 1998; Trembley et al. 2002a, b; Carbonero et al. 2002; Elifio et al. 2002) considered Dictyonema glabratum (including Cora pavonia) to be a species with wide distribution and broad ecological amplitude, being found on a wide range of substrata. The data now available indicate that this is not the case. The many species recognized phylogenetically and morphologically also have distinct substrate preferences, growing either on bare soil, among bryophytes, on rock, or epiphytic on branches, rarely on tree trunks. Cora aspera is one of a few species growing typically as an epiphyte and it is thus far the largest and most common epiphytic species known in the genus. It resembles the distantly related C. arachnoidea in dry condition but can be distinguished by the lack of a dense tomentum covering the entire upper surface and by the much finer, almost reticulate hymenophore. The latter is similar to that found in the more closely related C. pavonia, but that species differs by its terrestrial growth in bryophyte mats and its distinctly brownish color when fresh, as well as its coarsely undulate surface. 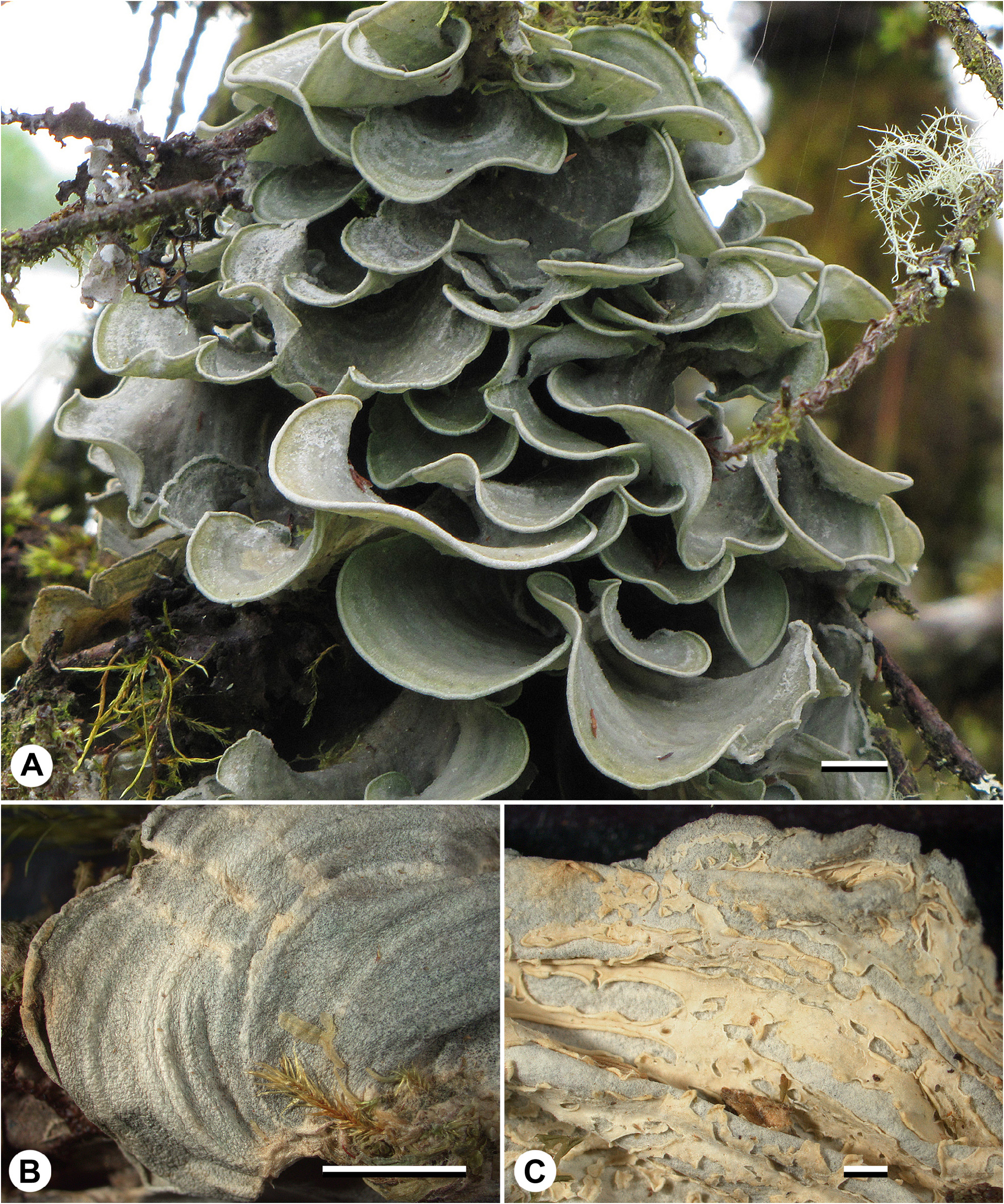