Named after the golden-winged Greek goddess Iris, grandchild of Tethys, who could reach all parts of the cosmos including the deep sea; and in memory of marine naturalist Iris Sorokin.

A small, spherical to oval, stalked, sponge ( Fig. 2 View Fig ). The sponge body is 11–14 mm diam., with the stalk approximately the same length as the diameter of the sponge. The surface is covered in polygonal platelike tubercules (2–3 mm diam.) separated by grooves (0.5 mm wide, 0.25–0.5 mm deep). The sponge is firm to hard and spiculose. Grey/white in life and in ethanol. There is a single raised apical osculum. No sign of any budding.

SKELETON. A stalk of dense megascleres supports the sponge. There is a ‘nucleus’ where the stalk meets the centre of the sponge body, and although the stalk may divide and/or flatten and thicken externally it emanates from the same point at the base of the sponge. From the nucleus dense bundles (0.3–0.7 mm in diameter) of megascleres radiate through the choanosome to the surface tubercles; the bundles slightly fan out in the tubercles. The cortex is a dense layer of micrasters and oxyspherasters interspersed with megascleres emerging through the tubercules, making the surface microscopically hispid ( Fig. 2 View Fig D– E). The cortex is well developed and follows the contours of the tubercules, 1–1.7 mm thick. Large cortical canals are visible between tubercles ( Fig. 2E View Fig ). A thin fibrous layer is below the cortex, it has micrasters in a much lower density. Large oxyspherasters are especially found at the base of the cortex. The megascleres of the stalk are covered in a layer of micrasters and regularly interspersed with shortrayed oxyspherasters. The choanosome is rich in sediment-like particles; there are some micrasters and rare oxyspherasters. Foraminifera ( Globigerina d'Orbigny, 1826   ) and Radiolaria are common in the cortical canals and the choanosome.

SPICULES. Megascleres are straight style/strongyloxeas (size range 900–3060 × 17–52 µm) ( Table 1 View Table 1 , Fig. 3 View Fig A–B) the proximal end is smooth and rounded, the distal end is tapered (not stepped) and either rounded or pointed. There are auxiliary thinner styles to subtylostyles in the medulla between the main styles (260–900 × 7–22 µm) ( Fig. 3C View Fig ). Megaster microscleres are two types of oxyspherasters: longrayed oxyspherasters (120–185 µm) ( Fig. 3D View Fig ) have ~15 rays that can be bent towards the oxeote tips (ray profile is conical); short-rayed oxyspherasters (53–154 µm) ( Fig. 3E View Fig ) have a larger centrum ~17 rays with a conical profile and oxeote tips. Micraster microscleres are acanthooxyspherasters (12–20 µm) ( Fig. 3F View Fig ), with a centrum and spined tips, and lightly spined on the rays.

Found on the continental slope in the Great Australian Bight at a depth of 1000 m, in soft sediment (clay/ silt).

It occurred to us that when using the key to genera of Tethyidae ( Sarà 2002)   , Tethya irisae   sp. nov. appears closest to the monospecific genus Burtonitethya   , a tethyid with a stalk of equal length to the diameter of the sponge. The type of Burtonitethya   ( B. gemmiformis   ), was collected from the Andaman Sea at an unknown depth (Sarà 1994). Burtonitethya gemmiformis   was originally assigned to Tethya   (labelled as Tethya gemmiformis Burton & Rao, 1957   on the NHM microscope slide) but was re-assigned to a new genus Burtonitethya   by Sarà (1994) on account of the stalk, the conspicuous nucleus with strongyles, the reduced lacunar cortex, the specialised surface tubercules and the giant oxyaster megasters. Our new species clearly differs from this species in having different microscleres and does not have the giant megasters present in B. gemmiformis   . As there is no specimen of the type species of Burtonitethya   and thus no potential to sequence the sponge, we cannot test if Burtonitethya   is a junior synonym of Tethya   .

As seen above, the genus Tethya   shows many different modes of attachment including basal stolons, basal roots, curved peduncles, flattened rooting processes as well as attachment discs and narrow skirts of tissue. Our results suggest that the stalk may not be a good genus-defining character within the family. Heim et al. (2007) in their analysis of Tethya   species, for which they used morphological characters and molecular markers, suggest that characters pertaining to ecological influences may have developed several times. Similarly, we suggest that some of the external morphological characters used to separate genera of Tethyidae   are homoplasious, probably appearing several times in different clades of Tethya   and we question whether they should be grouped as definitive characters in morphological identifications. In the same way the genus Amphitethya Lendenfeld, 1907   (Family Tetillidae Sollas, 1886   ) was created based on its stalk, but phylogenies show it is a Cinachyrella Wilson, 1925   ( Szitenberg et al. 2013; Schuster et al. 2017). 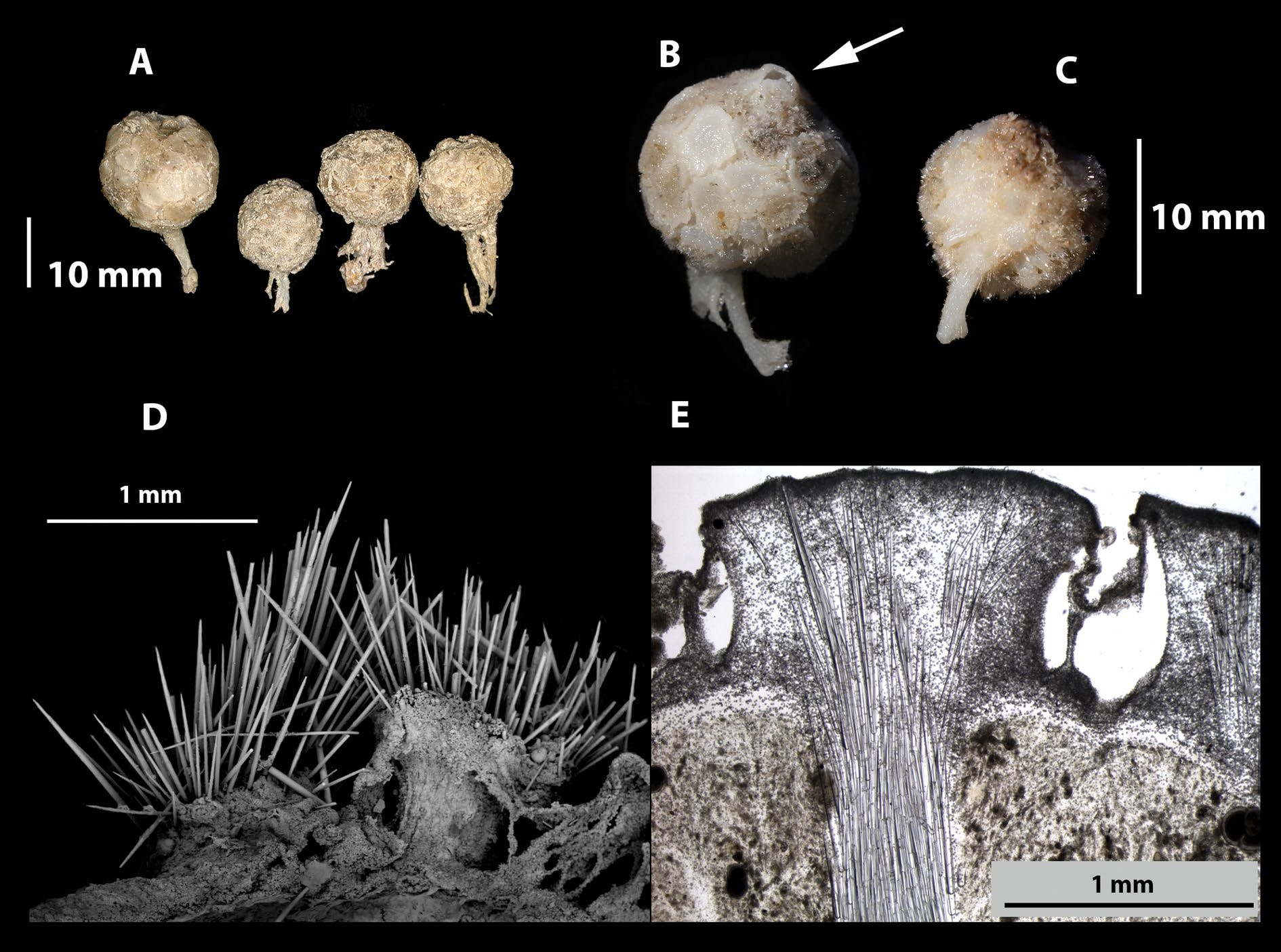 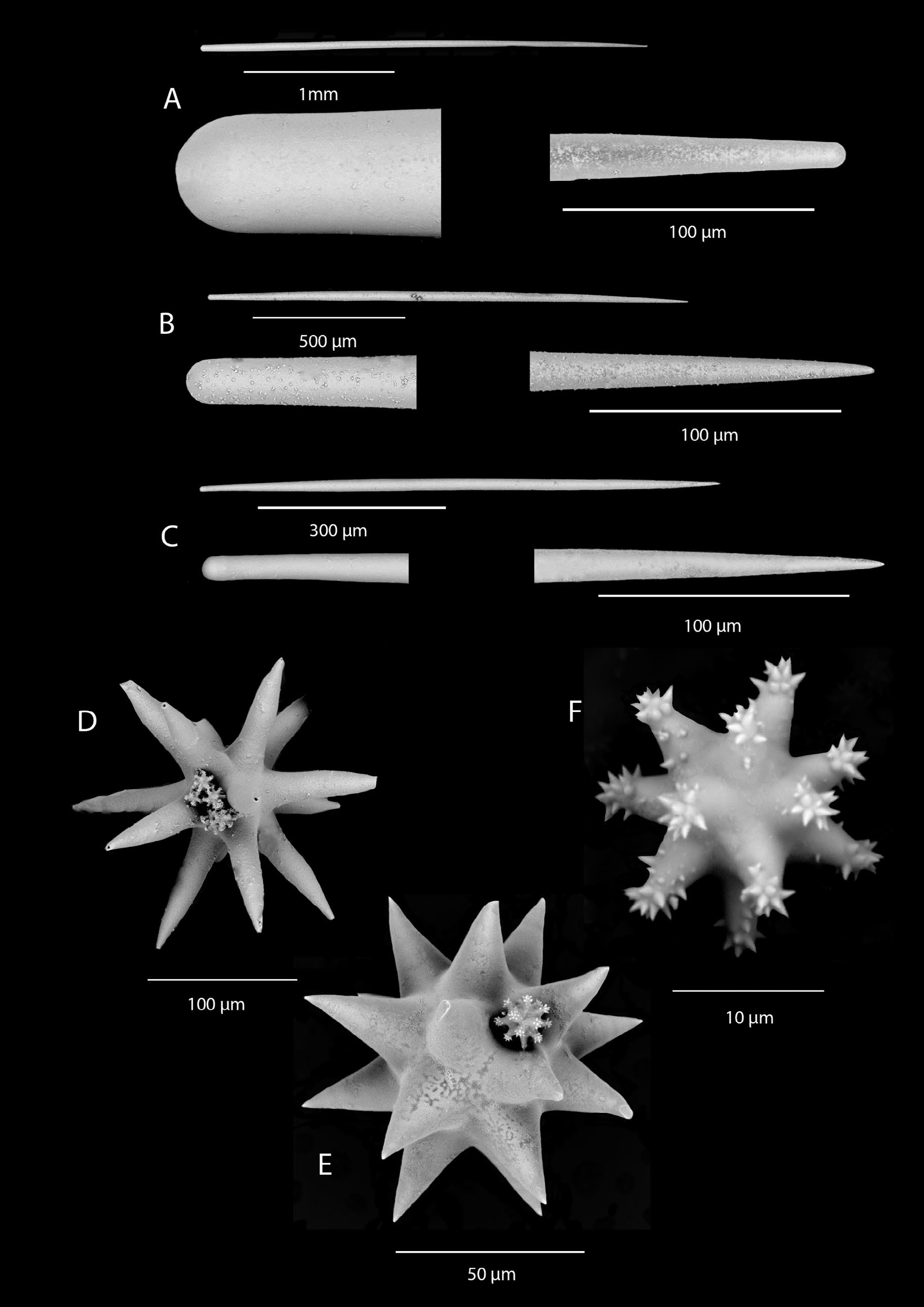 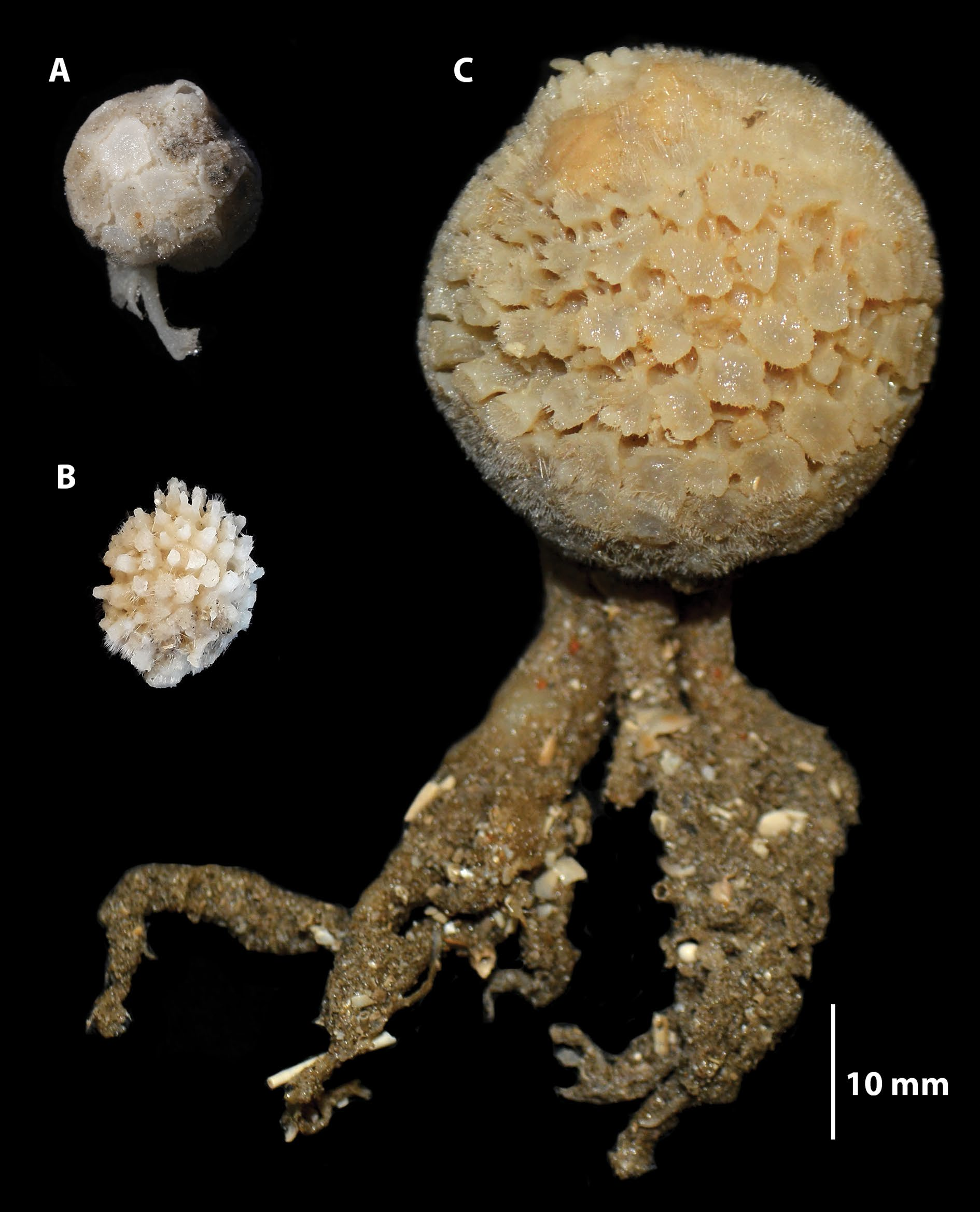