Adult and juvenile males of both instars were obtained at the end of experiment.

Postabdomen. In juvenile males of instar I similar to that of juvenile female ( Fig. 2 View FIGURE 2 A), with slightly irregular ventral margin, sperm duct openings located before the middle of ventral margin. In juvenile males of instar II ( Fig 2 View FIGURE 2 B), postabdomen becomes thinner in distal part, with not defined preanal angle. Ventral margin irregular, sperm duct openings located at 1 / 5 length of ventral margin from the end. Armament of postabdomen and postabdominal claw same as in female in both juvenile instars. In adult male ( Fig. 2 View FIGURE 2 C), postabdomen long, evenly narrowing distally, length about 4 times height. Ventral margin straight with clear step in the region of sperm duct openings, about 1 / 6 length ventral margin from the end of postabdomen. Distal angle rounded, not prominent. Distal part of postabdomen 3 times longer than preanal, postanal portion 2 times longer than anal one. Both postanal and anal margins weakly concave. Postanal angle weakly defined, preanal angle not defined. Single slender denticle, much smaller than these of juvenile instars, and two peculiar spined hillocks located at the end of postanal margin ( Fig. 2 View FIGURE 2 D, E), followed by about 15 clusters of short setules in place of marginal denticles. Lateral fascicles of setules same as in female. Postabdominal claw only slightly shorter than in juvenile instars, of similar morphology, with basal spine about 0.2 length of claw, two smaller denticles located between basal spine and base of claw.

Thoracic limb I. In instar I male with short anlage of copulatory hook, IDL same as in female ( Fig. 1 View FIGURE 1 C). In instar II male, copulatory hook curved ( Fig. 1 View FIGURE 1 F). Ventral face of limb with anlage of copulatory brush seta and a row of about 8 short setules below it. IDL with anlage of male seta, seta 1 becomes very small, setae 2 and 3 as in female. In adult male, limb I only a little larger than in previous instar ( Fig. 1 View FIGURE 1 ), copulatory hook U-shaped, small, 2.5 times shorter than limb itself. Copulatory brush present, a cluster of about 30 spaced long setules located near it, above the copulatory brush seta. IDL seta 1 present, very small, setae 2 and 3 subequal in size, smaller and thinner than in juvenile instars, male seta thick, strongly curved, as long as IDL seta 3. Morphology of endites same as in female.

Taxonomic notes. Daday’s (1898) description and drawings of the general view and postabdomen of male were somewhat fanciful. Rane (1984) described the Indian O. sangramsagari , on differences between males in his material and Daday’s (1898) description, but his taxon was recognized as a synonym by Sharma & Sharma (1990). The descriptions of O. singalensis male were incomplete in all of these publications, and quality of drawings poor. Juvenile males remained undescribed. As far as we can see, there are no significant differences between our material and descriptions by Rane (1984) and Sharma & Sharma (1990).

The morphology and postembryonal development of male Oxuyrella singalensis is similar to those of O. tenuicaudis and O. brevicaudis (see Michel & Frey 1983). O. singalensis male differs from these species by shape of postabdomen, which is longer, evenly narrowing, with undefined preanal angle, by strongly curved male seta of limb I and by the presence of clusters of long setules near copulatory brush of limb I. Postembryonal development of male in Oxyurella is similar to that in other genera of the subfamily (see Frey, 1988; Sinev 2000, 2004ab, 2009 a; Sinev et al., 2005), and there is no significant deviation from the general pattern of male ontogenesis (see Sinev 2009 a). 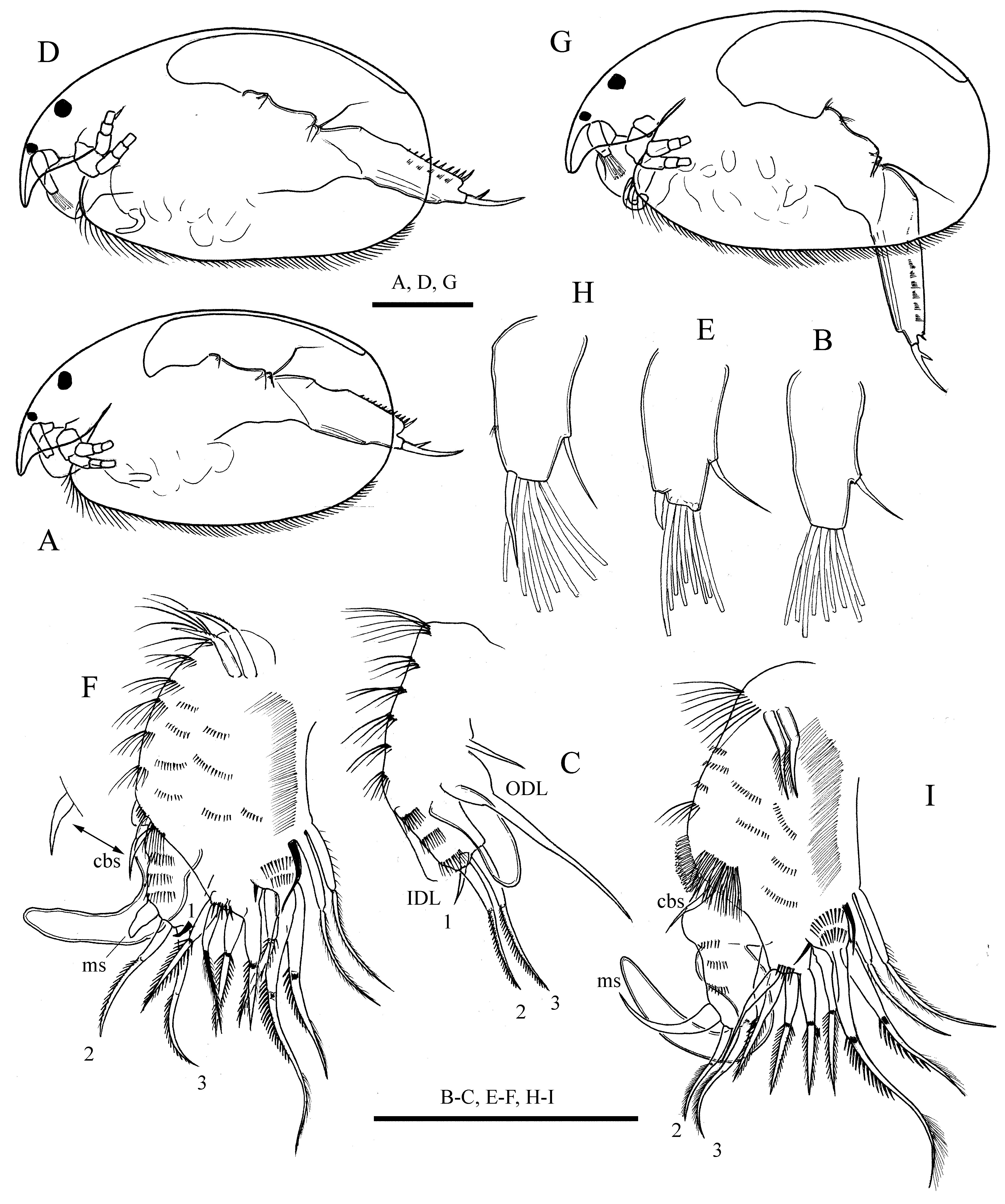