The medial margin of the only available specimen (ISER Tt-0300) is broken off. In dorsal view the bone is densely sculptured with prominent tubercles, which are sometimes confluent at their base. In ventral view there is a high bony wall which delimitates the nasal capsule mesially.

In dorsal view the outline of the bone is oblongshaped with an elevated dorsal region of roughly triangular shape. The latter is covered with small, prominent, and sometimes confluent tubercles, separated by deep grooves pierced by small pores. Medially the tubercles are rather diminutive but become more prominent anteriorly and laterally featuring a dished surface. However, in specimens ISER Tt-0301/1 and 2 the tubercles on the lateral side are completely fused producing a bony wall with denticulate dorsolateral margin ( Fig. 1A, B View FIG ). The posterolateral surface of the parietal is smooth displaying an anterolateral concavity, which delimits medially the temporal fenestra. There is a

animal was covered by the posteroventral margin of the frontal.

The only specimen lacks the otic process ( Fig. 1E View FIG ). The quadrate is widened ventrally and provided with a quadrate crest of moderate height ending in a distinct spur-like process facing laterally.

The single available specimen (ISER Tt-0302) lacks the ventral ramus, while the remaining dorsal part is flattened mediolaterally with the lateral surface covered by a prominent sculpture ( Fig. 1C View FIG , C’). The

posterior ramus is distinctly widened and in living animal its medial side contacted the crista parotica of the prootic. The anterior ramus is somewhat longer and thinner, and was articulated with the posterolateral process of the frontal, forming a complete fronto-squamosal arch.

ISER Tt-0304/1 lacks both the anterior and posterior portions ( Fig. 1D View FIG , D’). It is strongly curved medially and, except the dental parapet which is smooth, the labial surface is sculptured by low crests and shallow pits or grooves. The Meckel’s groove is widely opened. ISER Tt-0304/2 represents an anterior portion of a dentary with the meckelian

than that of ISER Tt-0304/1 and with the labial surface only slightly sculptured.

All the presacral vertebrae are strongly damaged.ISER Tt-0306/1 preserves the centrum and the transverse processes (= rib bearers), while the neural lamina is

broken off. The centrum is opisthocoelous and rather short. The subcentral surface is slightly convex and flattened, penetrated by several small foramina. The transverse processes are wholly interconnected by a bony lamina. The posterior portion of the anterior zygapophyseal crest joins the lamina interconnecting the transverse processes. An isolated neural spine, forked posteriorly and bearing a dorsal sculpture

All ribs assigned to Chelotriton paradoxus   are flattened antero-posteriorly, provided with two articular surfaces and with a rather prominent dorsal spine ( Fig. 2F, G View FIG ).

Only proximal and distal fragments were available for study. ISER Tt-0307/1 ( Fig. 2A View FIG ) has a rounded proximal articular surface which is continued in a rather prominent ventral humeral crest. The dorsal humeral crest is only partially preserved displaying a rather prominent and dorsally recurved process. The distal fragments are strongly widened and provided with a rather shallow ventral cubital fossa penetrated by several small foramina ( Fig. 2B View FIG ).

The only specimen assigned to this taxon is rather robust, thickened at the level of the acetabulum ( Fig. 2E View FIG ). The medial margin is straight, while the ischiadic plate is pierced by a small foramen; the ischiadic process is broken off.

All specimens are rather fragmentary, consisting of proximal and distal fragments ( Fig. 2C, D View FIG ). In lateral view the proximal section of the femur is curved ventrally, provided with a rather robust femoral head. The trochanter possesses a spur-like process connected to the extremely prominent crista trochanterica. The distal part of the femur is bent dorsally, expanded distally, and provided with a well-defined distal fossa.

The material described closely resembles C. paradoxus   and the morphological diversity of the available specimens does not exceed the limits of the intraspecific variations. The secondary sculpture which covers a number of cranial bones, consisting of densely distributed tubercles, strongly differs from that of C. robustus Westphal, 1980   , known from the Eocene of Germany, in which the sculpture on cranial bones consists of broad pits delimited by prominent ridges ( Westphal 1980). In the extant

Tylototriton Anderson, 1871   the parietal sculpture is not at all so extensive (e.g., see Haller-Probst 1998) than observed in the Tauţ specimens. In fact, the morphology of the sculptured elements, especially those of parietals with highly elevated sculptured surface and that of the dentary bearing also a smooth dental parapet, approaches the condition observed by Roček (2005) in Chelotriton   sp. – type I, described from the late Miocene (MN 9) of Rudabánya locality. The quadrate spur of the only fragmentary specimen is present not only in Chelotriton   but also in the extant Echinotriton Nussbaum & Brodie, 1982   and in some members of Tylototriton (Haller-Probst 1998)   . However, a somewhat smaller quadrate process is present in several Recent Salamandra salamandra (Linnaeus, 1758)   examined by us (e.g., MTC 24030 View Materials , 24031, 24032). The development of the anterior zygapophyseal crest seems to be variable within Chelotriton   : whereas the only specimen from Tauţ exhibits the condition seen in cf. Chelotriton   , reported from the late early Miocene (MN 4) of Béon 1, France ( Rage & Bailon 2005), in presacral vertebrae of C. pliocenicus Bailon, 1989   , known from the late Pliocene (MN 16) of Balaruc II, France, the anterior zygapophyseal crest joins the lower rib bearer (= parapophysis) ( Bailon 1989). 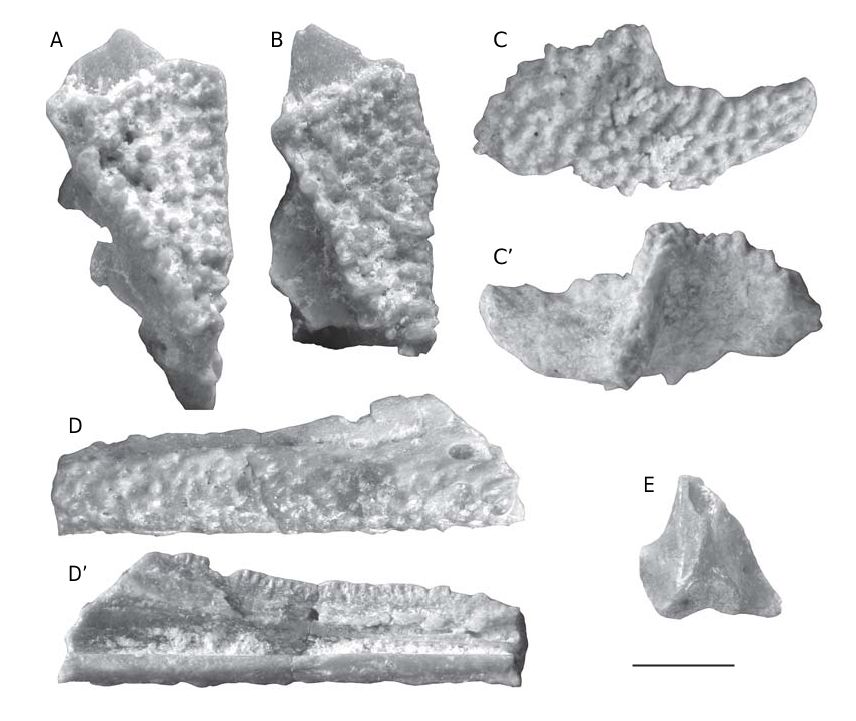 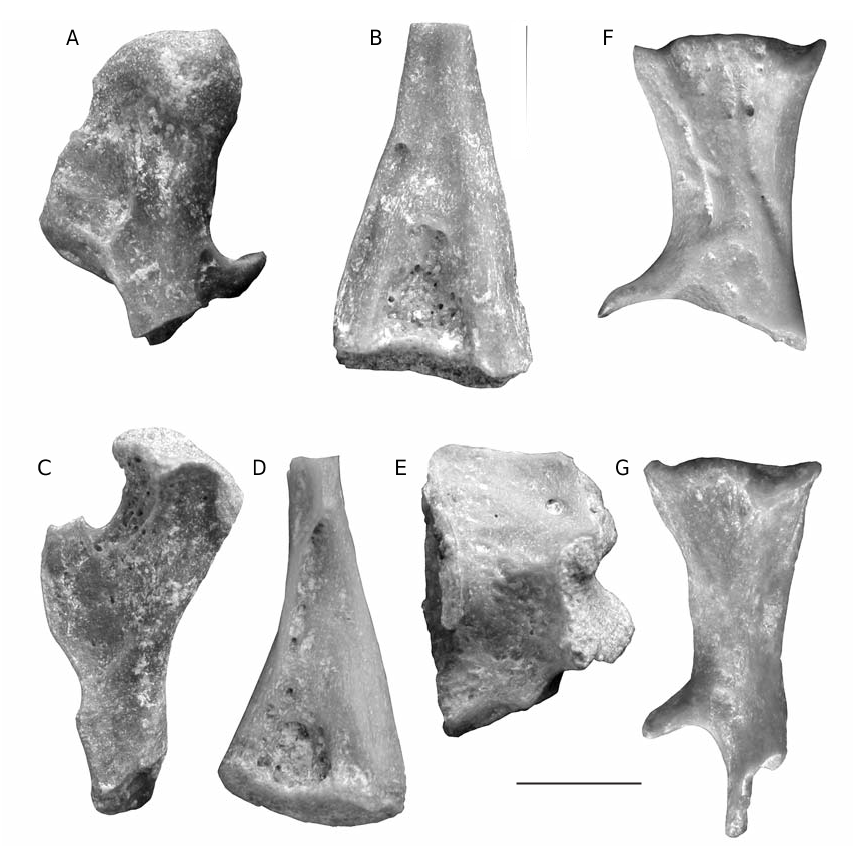