The dorsal surface bears a fine sculpture formed by

shallow ridges and pits ( Fig. 4A View FIG ). The supraorbital margin is low; parallel to the latter, a deep and widening furrow is directed anteriorly. The relatively short posterolateral process tapers distally, and its posterior edge only slightly exceeds the posterior margin of the frontal. This morphology is suggestive of an incomplete or a somewhat weak frontosquamosal arch.

In the single specimen only the centrum is preserved. The subcentral surface is slightly concave, triangleshaped and provided with two relatively large subcentral foramina ( Fig. 4B View FIG ). The articular surface of the paired atlantal condyles is of circular shape. The odontoid process is partially divided exhibiting two shallowly convex ventrolateral articular surfaces of oval shape. The atlantal cotyle is circular.

All the specimens are small sized with relatively short and opisthocoelous centrum ( Fig. 4 View FIG C-C’’). The neural arch is moderately vaulted and provided with a relatively high neural spine forking posteriorly. The dorsal margin of the latter structure is not widened laterally.

Based on the available material, the above taxon may be securely placed in the genus Lissotriton   . Among members of Lissotriton   the postfrontal process is rather long in L. helveticus (Razoumovsky, 1789)   and L. boscai (Lataste, 1879)   but is relatively short in L. montandoni (Boulenger, 1880)   and L. vulgaris (Linnaeus, 1758)   , the later displaying a morphology fairly similar with that of ISER Tt-0350. The size and morphology of the trunk vertebrae, with relatively high neural arch and well-developed neural spine forking posteriorly, support also the taxonomic assignment of the above fossils. Lissotriton roehrsi (Herre, 1955)   , an extinct member of the genus, known from the early to late Miocene of Central Europe ( Sanchiz 1998a; Böhme & Ilg 2003), differs from the other ingroup taxa by having a relatively high neural spine provided with a distinct dorsal enlargement of the dorsal margin. Furthermore, Sanchiz (1998a) reported numerous

roehrsi   from the late early Miocene (MN 4) of Obersdorf, Austria. The frontals are provided with a relatively long postfrontal process and with an extensive sculptured dorsal surface differing clearly from the Tauţ specimen.

The earliest fossil record of the genus Lissotriton   might be from the late early Miocene (MN 4) of Béon 1, France, described under the name Triturus   aff. T. helveticus   by Rage & Bailon (2005) and Obersdorf, Austria (Sanchiz 1988a), suggesting an already wide distribution of this group during late early Miocene. 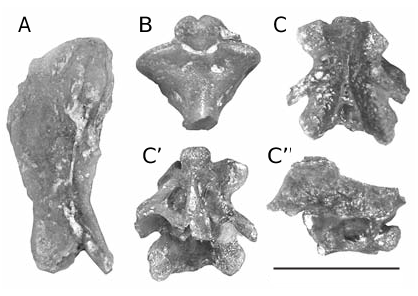