We provide a diagnosis based on preserved specimens; however, we emphasize that this species presents a marked skin texture variation that cannot be observed on museum specimens and is described in the Variation of skin texture section. Pristimantis mutabilis   was diagnosed by having:

4. upper eyelid with one conical or sub-conical tubercle and several low tubercles, which are almost unnoticeable in some specimens; cranial crests absent;

In the Pacific slopes of the Andes, the only species that has a similar size, morphology, and colour pattern is P. verecundus ( Lynch & Burrowes, 1990)   . Pristimantis verecundus   is easily distinguished by having short dorsolateral folds that only reach the level of sacrum (dorsolateral folds extend posteriorly beyond the level of sacrum in P. mutabilis   ). Females also have a unique chevron pattern on the throat ( Fig. 1 View Figure 1 ), which is absent in P. mutabilis   . Additionally, adult males of P. verecundus   are slightly larger [18.0– 21.9 mm (N = 4); Lynch & Burrowes 1990] than males of P. mutabilis   (17.2– 17.3 mm; N = 2), although sample sizes are low. Genetically, populations of P. verecundus   and P. mutabilis   are reciprocally monophyletic with strong support and have a substantial uncorrected genetic distance of 16.2– 16.8% in the combined 12S and 16S dataset ( Fig. 4 View Figure 4 ; see Genetics below).

Description of the holotype

Measurements of type series and referred specimens: Meristic data are shown in Table 1.

All individuals of Pristimantis mutabilis   presented a markedly tubercular skin texture when found on vegetation or hidden in moss during the night. Large tubercles were evident on the dorsum, upper and lower lips, upper eyelid, arms and legs. After frogs were captured, they all showed a sudden and drastic change in skin texture; all tubercles became reduced in size, and the dorsal skin became smooth or nearly smooth (i.e., few tubercles are visible, mainly on the upper eyelid and heel). When frogs were returned to mossy, wet environments, they recovered a tuberculate skin texture. We speculate that explanatory variables involved in frog skin texture change are stress, humidity, and background. Our observations do not support light availability as a source of texture variation as we observed skin texture change at day and night. The time rate of skin texture variation might depend on the variables mentioned above; we only have one quantitative measure, which is summarized in Figure 2 View Figure 2 .

The genetic results supported the morphological analyses by placing the new species in the Pristimantis myersi   species group ( Fig. 4 View Figure 4 ), although the group itself is only strongly supported in Bayesian analyses and contains species from the P. unistrigatus   group. Reciprocal monophyly of the new species is supported in maximum likelihood and Bayesian analyses (for 12S, 16S, and concatenated datasets) with high bootstrap and posterior probabilities ( Fig. 4 View Figure 4 ). The populations from Reserva Las Gralarias and Reserva Los Cedros differ by large genetic distances of 5.0–6.5% while individuals from the same area show differentiation of 0.01– 0.04%. This result suggests the existence of a cryptic species, however data were not available to assess this possibility. We find substantial genetic differentiation between the new species and P. verecundus   , which are morphological similar and possibly evolutionary sister species. We find genetic distances of 15.1–16.3% and 16.4–18.6% for the new species compared with P. verecundus   for 12S and 16S, respectively. For the concatenated dataset, we find genetic distances of 16.2– 16.8% from P. verecundus   .

MZUTI 2190; adult male recorded from Reserva Las Gralarias on February 1, 2013; night with light rain, temperature of 14.2 °C. Pristimantis mutabilis   emitted calls at an approximate rate of five calls per minute (N = 1). Three distinct types of calls were emitted by this species: (1) a single-note call with a single strong Time (ms) amplitude peak ( Fig. 5A View Figure 5 ); (2) a single-note call with four or more strong amplitude peaks ( Fig. 5B View Figure 5 ); and (3) a series of 5–6 calls with very short time intervals and frequency modulation increasing for each call throughout the series ( Fig. 5C View Figure 5 ). The biological function of each call type is not known.

The specific epithet mutabilis   is the Latin word for changeable and refers to the ability of this species to modify its skin texture.

Pristimantis mutabilis   has been found in both primary and secondary Andean forests. At Reserva Las Gralarias, the two males (MZUTI 2190, 2191) were found con- cealed in moss on a tree 230 cm above the ground; calling males were heard during January and February 2013. Additionally, other individuals (MZUTI 413; 909–913) were found on the surfaces of leaves about a metre above the ground ( Fig. 3A View Figure 3 ). All individuals were observed to be displaying the tuberculate state while perched on leaves.

At the two localities where Pristimantis mutabilis   has been recorded, the species seems to be abundant, based on the vocalizations that are commonly heard during the night. However, given the arboreal habits of the species, observations are rare. As an example, at Reserva Las Gralarias, we have only observed three individuals during a three-year study.

Given the available information on Pristimantis mutabilis   , and following IUCN (International Union for Conservation of Nature) (2001) criteria, we suggest placing this species in the Data Deficient category. 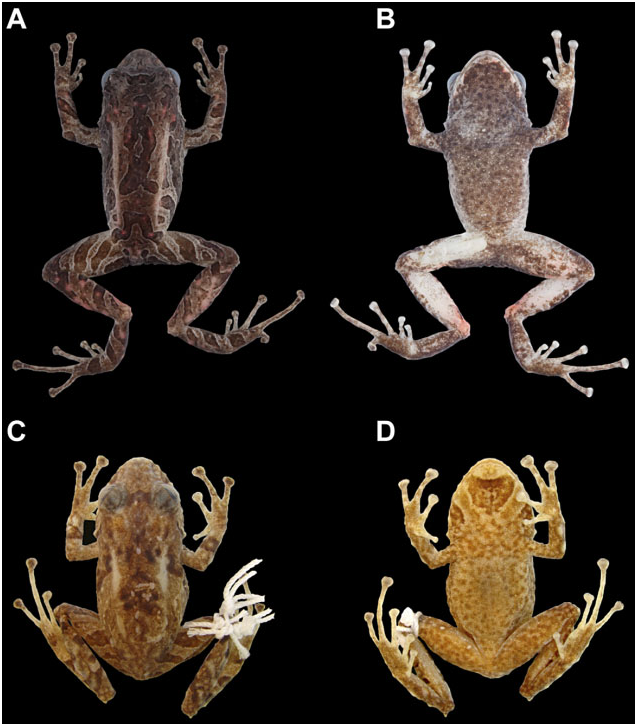 Figure 2. Skin texture variation in one individual frog (Pristimantis mutabilis) from Reserva Las Gralarias (Pichincha, Ecuador). Note that skin texture shifts from highly tubercular to almost smooth; also, note the relative size of tubercles on the eyelid, lower lip, and limbs. The frog was found on a leaf during the night (left photograph) and photographed in the laboratory (photograph with white background) the following morning. 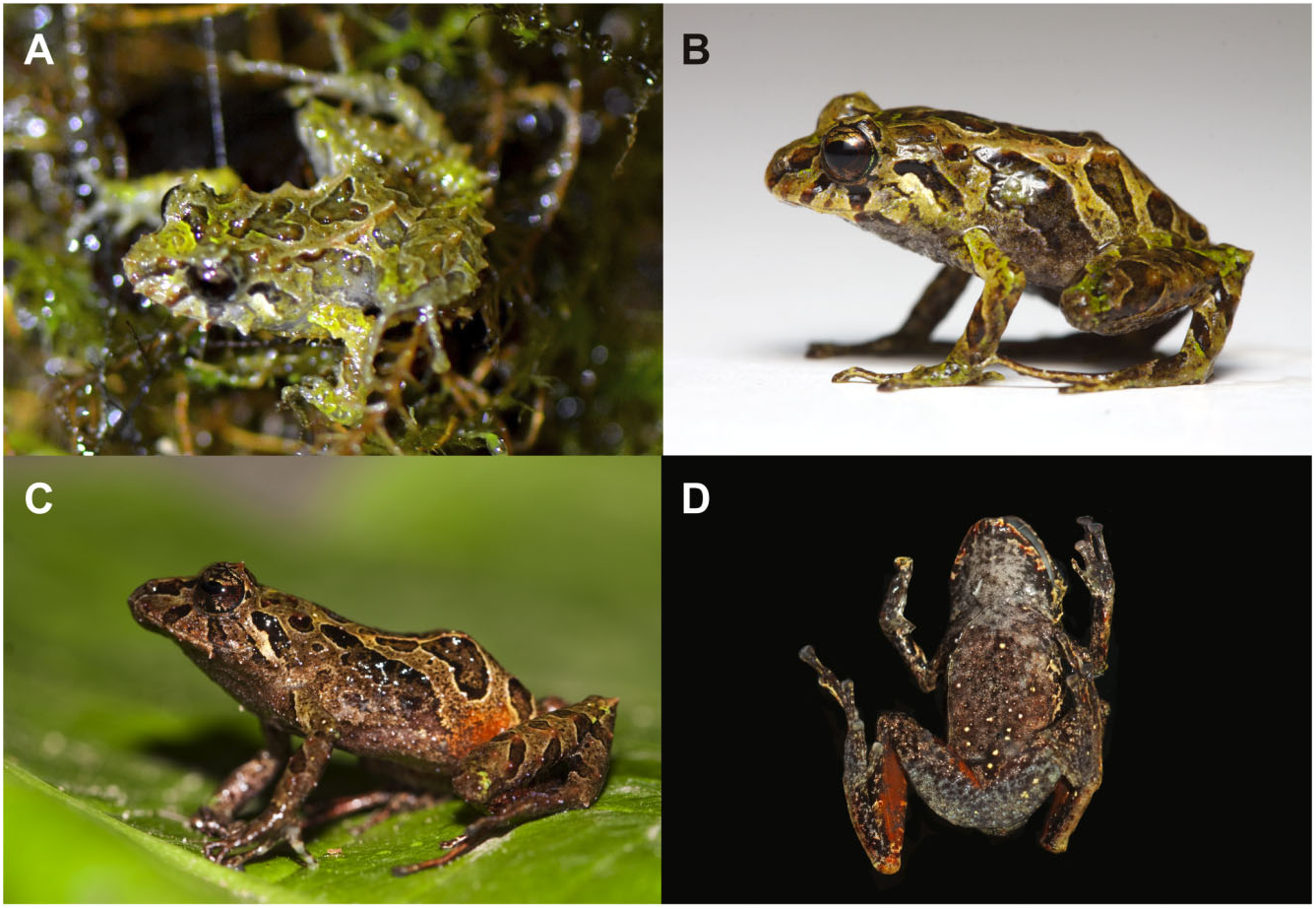 Figure 4. Maximum likelihood (ML) and Bayesian (BA) genetic topology for the combined 12S and 16S dataset. Separate gene trees not shown because the results were similar. The circles at the nodes show ML and BA significant support values (ML: bootstrap> 75%; BA: posterior probability> 0.95). The lack of a circle indicates that the node was not significantly supported by either analysis. The (1) and (2) represent two possible evolutionary scenarios given current data. Scenario 1 hypothesizes that skin texture plasticity originated independently twice while Scenario 2 hypothesizes that skin plasticity originated once in the common ancestor to the P. myersi and P. surdus groups. Figure 5. Oscillogram and spectrogram for the three call types A–C, of Pristimantis mutabilis on the same time scale. Note that call type C is a series of calls. 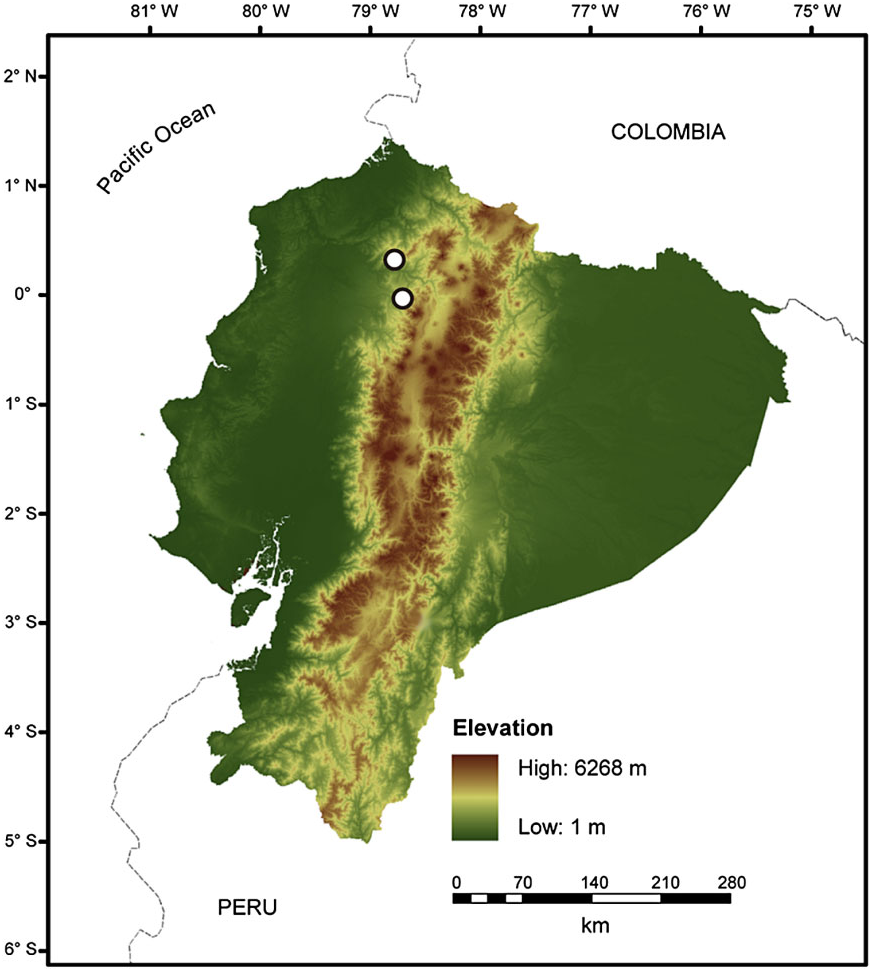