Etymology. The new species was named after June Osborne, the main character of “The Handmaid’s Tale” TV series played by Elisabeth Moss and based on the original novel written by Margaret Atwood, due to her will to endure and fight the oppressive social system in which she lives. June’s character symbolizes the struggle of women in our real society.

Habitat. Specimens of Entomobrya juneae   sp. nov. were collected from areas within Atlantic Forest phytogeographic domain, in Extremoz municipality, Rio Grande do Norte State, from sandy soil and dead foliage samples on forested (shaded) sites, during both rainy and dry seasons. According to Köppen-Geiger system, the climate of the area is ‘As’ – equatorial hot with a dry summer, with average annual precipitation of 1.600 mm ( Kottek et al. 2006; Embrapa 2019).

Remarks. Concerning the Neotropical Entomobrya   , the new species possibly resembles most E. uambae   , E. paroara   and somehow the widespread E. atrocincta   and E. nivalis   (the last two as presented in Katz & Soto-Adames 2015) partially in color pattern and dorsal chaetotaxy, only known for the last two species. Compared to E. uambae   and E. paroara   the new species differs in presenting the antennae shorter or as long as the trunk (clearly longer in E. uambae   and E. paroara   ), prelabral chaetae simple (bifurcated in E. paroara   ), absence of basal tooth on unguiculus (present in E. uambae   ), dens normally crenulate (almost rigid in E. uambae   and E. paroara   , with few crenulations) and mucro with distal tooth reduced (subequal in E. uambae   ). Compared to E. paroara   the new species also differs in the presence of the apical bulb on Ant. IV (absent in the first species, see Arlé & Guimarães 1978, pg. 3). This is also the case of E. egleri   ( Arlé & Guimarães 1978, pg. 15). This shared condition supports neither species are Entomobrya   and suggests both may actually belong to Entomobryoides   , even though the legs chaetotaxy and other morphological aspects are unclear for such species (as discussed for Entomobryoides in Jordana 2012   ). A further discussion concerning this topic is presented ahead in the text.

Concerning the dorsal chaetotaxy, the new species can be readily separated from E. nivalis   and E. atrocincta   especially in: absence of Ps5 mac on head (present in E. atrocincta   and E. nivalis   ), absence of m5 and p5 mac on Th. II (both present in E. nivalis   , p5 present in E. atrocincta   ), absence of a2 and a3 mac on Abd. III (both present in E. atrocincta   , a3 present or absent in E. nivalis   ) and reduction of A series of mac on Abd. IV, with only A6 (with more mac in the other two species). The new species also differs from E. atrocincta   and E. nivalis   in prelabral chaetae smooth (ciliate in the other two species) and trochanteral organ with about 25 smooth chaetae (about 30 or more in the other two species). The recently described Brazilian Entomobrya bahiana   resembles the new species in part of the complexity of head, thorax and Abd. I–III chaetotaxy, but it is remarkably different concerning the color pattern, with trunk almost entirely pigmented, dorsal head with Ps3 and Ps5 and lacking S1 mac (the opposite in E. juneae   sp. nov.), presence of m2 plus one multiplet (as mac) on Th. II (both absent in E. juneae   sp. nov.) and specially holding a more complex macrochaetotaxy of Abd. IV (reduced in central area of E. juneae   sp. nov.). The labial chaetotaxy of both species also differs, and E. bahiana   presents R and E ciliated, while the new species present only e as a smooth chaeta. Finally, the trochanteral organ of E. bahiana   is reduced (with about 15 chaetae) compared to the new species (about 25). More comparisons among the cited species are presented in Table 1 View TABLE 1 . 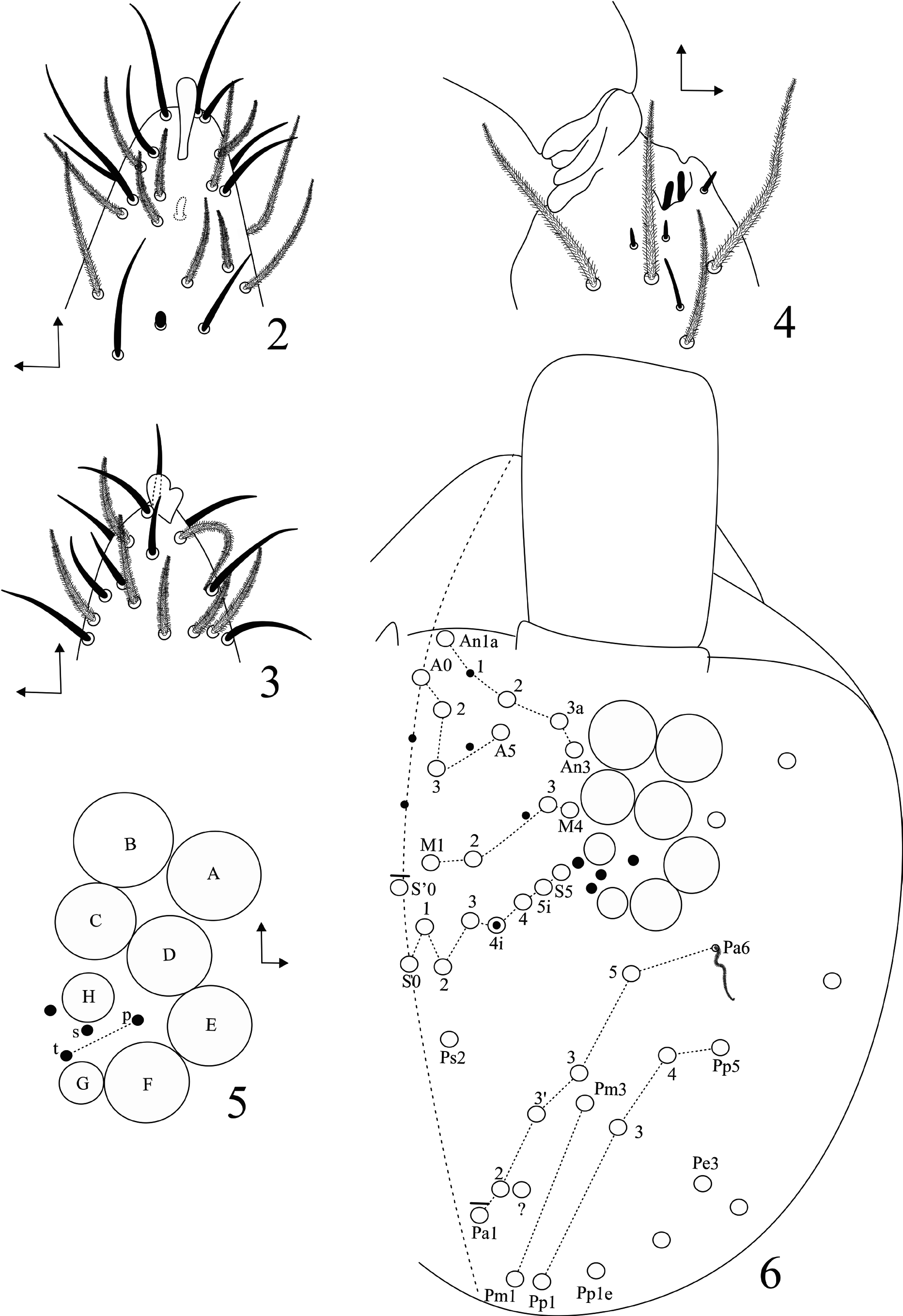 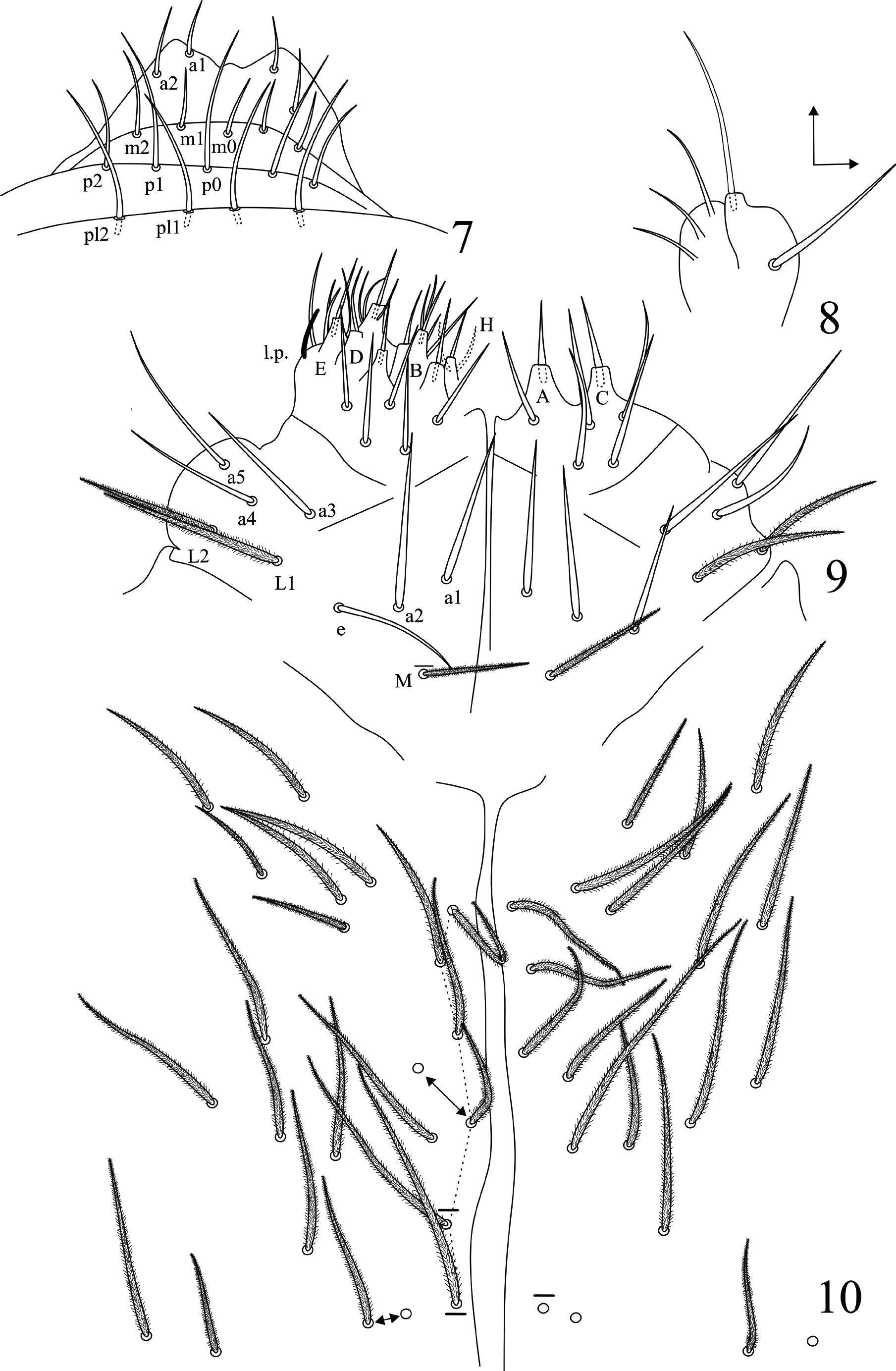