Armbruster, Jonathan W., 2004, Phylogenetic relationships of the suckermouth armoured catfishes (Loricariidae) with emphasis on the Hypostominae and the Ancistrinae, Zoological Journal of the Linnean Society 141 (1), pp. 1-80: 53-54

Several problems are evident in Weber’s (1991, 1992) treatment of the species of Pterygoplichthys   s.l. The first is that the phylogeny given is not the single shortest tree. Given the data, a second most parsimonious tree could be constructed with the positions of Pterygoplichthys   and Glyptoperichthys   switched, and the tree should have more properly included a trichotomy of Pterygoplichthys   , Glyptoperichthys   , and Megalancistrus   . Second, a close relationship of Pterygoplichthys   and Megalancistrus   would suggest that the distinct alteration to the opercle in the Ancistrinae   (Schaefer, 1986, 1987) had to evolve twice (see character 75: 1; Fig. 19C, D View Figure 19 ). Third, none of the genera are uniquely diagnosed. Glyptoperichthys   with the inclusion of G. punctatus Natterer   has no unique synapomorphies, although a particular pattern of plates between the dorsal-fin spine and the head putatively diagnoses both Glyptoperichthys   and Liposarcus ( Weber, 1992)   . The pattern is also present in many other loricariids and seems of little phylogenetic usefulness (pers. observ.). The other characteristic that is listed as synapomorphic for Liposarcus   , thin anterolateral processes of the basipterygium, is polymorphic within the genus (pers. observ.). Finally, it appears that Weber lumps the species of his Pterygoplichthys   together based on the putatively plesiomorphic condition of the postdorsal plates mentioned above. Two of the species retained in Pterygoplichthys   ( P. undecimalis (Steindachner)   and P. zuliaensis Weber   ) occur to the west of the Andes in the Río Magdalena and Lago Maracaibo basins, respectively, and the other species ( P. etentaculatus   ) occurs on the opposite side of South America in the Rio São Francisco. Although not impossible, the range suggested by Weber (1991, 1992) is unlikely.

Based on a unique modification of the stomach (213: 1), I have already suggested ( Armbruster, 1998c) that Pterygoplichthys   , Glyptoperichthys   , and Liposarcus   represent a monophyletic group sister to the Hemiancistrus annectens   group, which consists of several species formerly placed in Hemiancistrus   (represented in this analysis by H. holostictus   , H. maracaiboensis   , and H. panamensis   ). The results of this study support the conclusion of the earlier one, and the Pterygoplichthini   is supported both by the modified stomach and the presence of 2–3 plates between the suprapreopercle and the exposed opercle (81: 2).

Figure 5. Phylogeny of Pterygoplichthys and related genera from Weber (1992) based on osteology and external features. 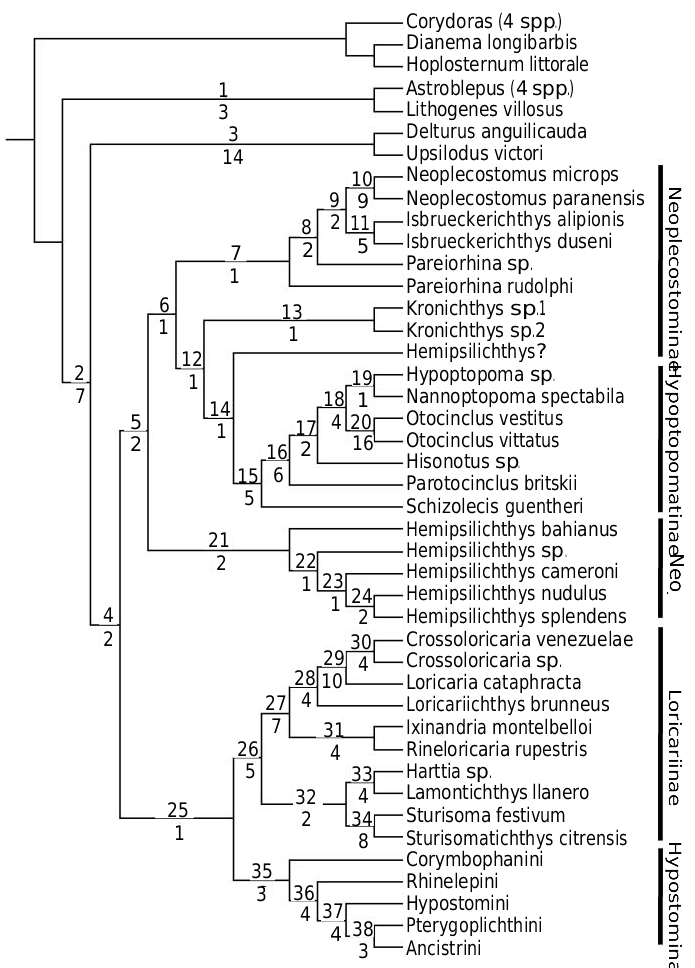 Figure 36. Relationships of Astroblepus, Lithogenes, hypostomine tribes, and the nonhypostomine loricariids based on the ordered analysis. This is part of the strict consensus of 5098 most parsimonious trees of trees of 1328 steps, CI = 0.203, remainder of the consensus tree is in Figs 37 and 38. Numbers above the branches are clade numbers, numbers below are decay indices. Figure 37. Relationships of the hypostomine tribes and taxa within the Corymbophanini, the Rhinelepini, the Hypostomini, and the Pterygoplichthini based on the ordered analysis. This is part of the strict consensus of 5098 most parsimonious trees of trees of 1328 steps, CI = 0.203, remainder of the strict consensus tree is in Figs 36 and 38. Numbers above the branches are clade numbers, numbers below are decay indices. 1Aphanotorulus, Cochliodon, and Isorineloricaria are placed in Hypostomus. 2The Hemiancistrus annectens group represents an undescribed genus, Hypostomus panamensis is now placed in Hemiancistrus. 3Glyptoperichthys and Liposarcus are placed in Pterygoplichthys.