Diagnosis. Females larger than males. Carapace longer than wide, pyriform, short, with naked setae evenly dispersed around perimeter; not reaching or reaching the anterior edge of the second pair of legs on females and on young males; on adult males it covers the second legs; about two series of inconspicuous spines with rounded tip on frontal region of the ventral surface of the carapace parallel to the anterior border of the cephalothorax. Respiratory area composed of an anterior area, spherical in males and pyriform in females, and a posterior oblong area, which has a constriction in the middle, with the posterior region larger than the anterior; caudal rami, pedunculated, nearly basal in anal sinus; postantennal spines single, with two lateral points, and one point anteriorly, resembling wings of bats. Males support 54–64 rods per suction cup; females support 56–64 rods per suction cup; 8–12 sclerites per rod in males and 7–13 in females, which decrease in number on medial-posterior portion, defined by the rim of suction cup. Basal plates of second maxilla with three claviform, digitate spines; scales arising from the pad and spam distally; 5 stout, naked setae on posterior margin of pad. Legs without flagella; coxa of second leg of male with posteroventrally bilobate structure, which bear several spines; third leg of male with paddle-like extension issuing anteroventrally from the dorsal side of the coxa, extending over bases; a fleshy lobe dorsally; and a bubble-like area ("socket") on posterior of base; fourth leg of male with a peg issuing anterodorsally from base; a ventrally bone-shaped fleshy lobe and 2 naked setae at base, natatory lobe with 4 naked setae; fourth leg of female with 2 plumose setae and 6 naked setae at the base and 2 plumose and about 20 stout setae at natatory lobe, which decrease in size medially.

Pair of compound eyes with diameters (µm) in males, 202 (165–235, n = 3) left and 215 (202–226, n = 3) right; and in females, 237 (183–275) left, 232 (183–275) right. Transverse distance between eyes (µm) in males, 339 (263–472, n = 3), and in females 424 (325–525). Nauplius eye with one anterior and two posterior ocelli, pigment cell between ocelli forming a dark "Y". Sclerotized dorsal ridges arise from the posterior groove that delimit the cephalothorax, move forward, and undergoes a lateral separation at the level of the nauplius eye, where a small lateral projection arises, it undergo a medial approximation, and it reaches the anterior region of the cephalothorax, opening laterally at level of the compound eyes. In the distal third of the antero-lateral grooves, there is in females, on each side, a medially directed groove, which bifurcates and ends in an elevation of the cephalothorax. In the male there is a posteromedial groove that unites below the nauplius eye.

Remarks. In Argulus chiropteroideus sp. n. specimens, the carapace alae does not reach the third legs. In freshwater environments in South America, this characteristic is shared by adults of Argulus elongatus Heller, 1857 ; Argulus ichesi Bouvier, 1910 ; Argulus violaceus Thomsen, 1925 ; A. multicolor ; Argulus patagonicus Ringuelet, 1943 and A. chicomendesi ( Bouvier 1910; Heller 1857; Malta & Varella 2000; Ringuelet 1943; Stekhoven Jr. 1937; Thomsen 1925). The argulid described here is two times longer than it is wide and the carapace does not exceed the second legs; the carapace is ornamented with anteroventral spines, there are no spines on the lateroventral region; the second maxillae has 3 digitate spines at the basal plate; and legs 3 and 4 have 2-segmented endopods. All these characteristics are shared with A. chicomendesi ( Malta & Varella 2000), but A. multicolor also shares several of these character states (Lemos de Castro 1949, 1951; Stekhoven Jr. 1937).

The anterior and posterior spine are absent on the second segment of the first antenna of A. chiropteroideus sp. n. whereas they are present in A. chicomendesi ( Malta & Varella 2000), and there is one anterior and one posterior spine on the first segment and two posterior spines on the second segment of first antenna of A. multicolor . The single postantennal spines of A. chiropteroideus sp. n. is medially convex with two lateral tips and one anterior tip, resembling the wings of a bat, distinguished from A. chicomendesi , which has single, triangular postantennal spines ( Malta & Varella 2000), and from A. multicolor , where the spine has one lateral and one posterior tip.

The second maxilla, which has three claviform, digitate spines in A. chiropteroideus sp. n. also distinguishes it from A. chicomendesi and from A. multicolor . A. chicomendesi has three conical, short spines ( Malta & Varella 2000), whereas A. multicolor have no spines at the base of the second maxilla (Lemos de Castro 1949, 1951; Stekhoven Jr. 1937) 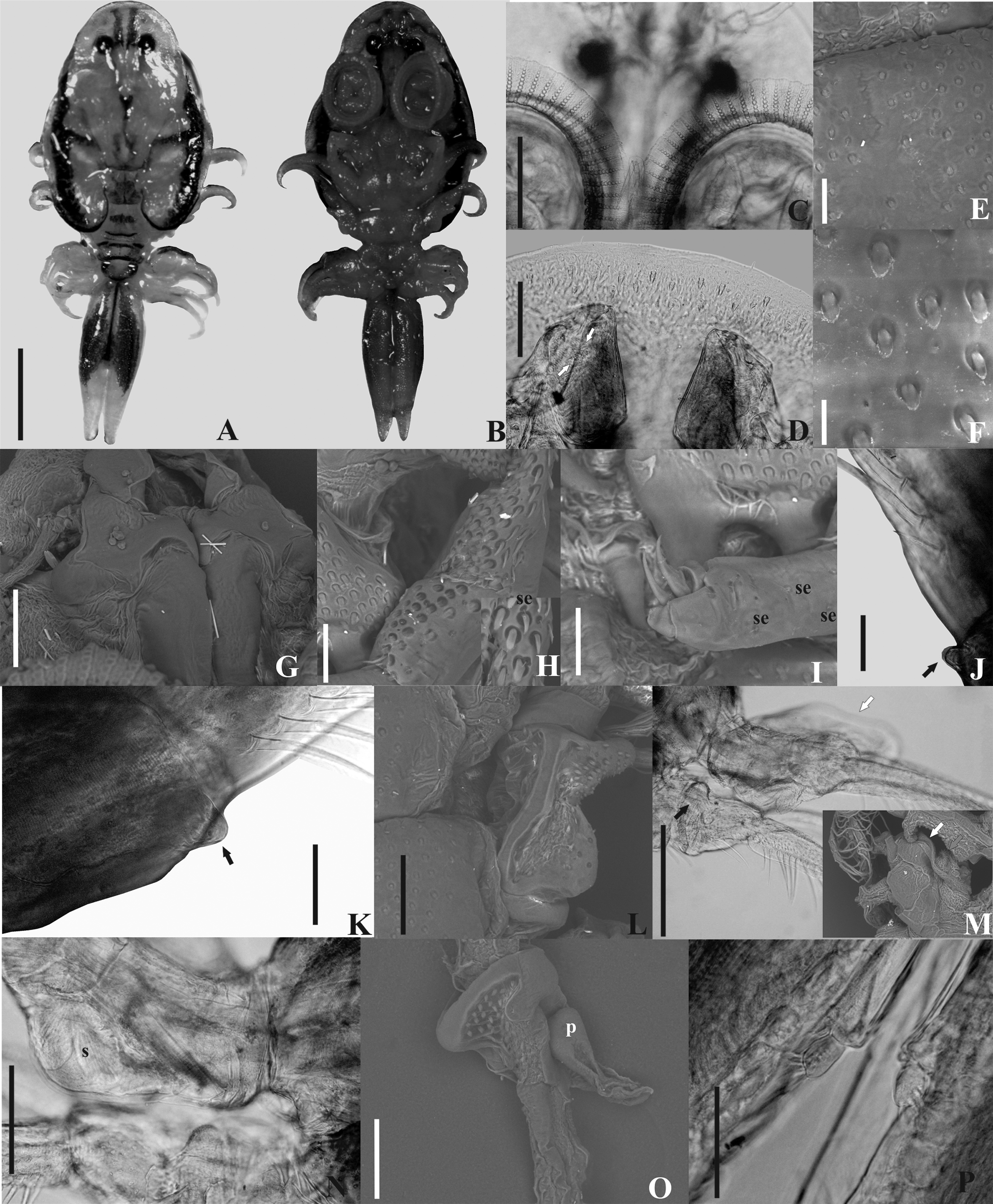