ETYMOLOGY. — This species is named in honor of, and out of respect to, Pierre-Henri Dalens, président de la Société entomologique Antilles-Guyane (SEAG), who led the Mitaraka entomological team during periods 2 and 3 of the expedition. Thanks to him, the 6 m Malaise trap was installed on ‘savane roche 2’ which led to the discovery of an unprecedented rich Enlinia   fauna on this rocky outcrop.

DIAGNOSIS. — Enlinia dalensi   n. sp. can be recognized by the form of the modified fore tarsus ( Fig. 11A View FIG ), the ventral setae on middle femur ( Fig. 11C View FIG ), the shape of the wing and wing veins ( Fig. 12 View FIG ), and modifications of abdominal sternites ( Fig. 11D, E View FIG ). This species is closely related and quite similar to E. bredini Robinson, 1975   from Dominica, to which it keys in Robinson (1975). Both species have similarly modified fore tarsi ( Fig. 11A View FIG ), similar modifications in shape and armature on abdominal sternites 3 and 4 ( Fig. 11D, E View FIG ), and similar blunt setae on middle femur ( Fig. 11C View FIG ), among other characteristics. Enlinia dalensi   is most readily distinguished by a distinctly sinuous wing vein R 4+5 that is bent backwards at apex (straight in E. bredini   ), a wing with a less sinuous posterior margin, and larger anal area, and epandrial lobes that lack plumose hairs and feature large prong or hook on inner surface near base.

Legs. Yellow with coxae brownish, with dark setae. Fore coxa with a large seta on inner anterior surface near apex. Mid trochanter ( Fig. 11C View FIG ) with long black ventral seta (in line with row of ventral setae on mid femur). Fore femur ( Fig. 11B View FIG ) with a slender erect ventral seta at base (length subequal to width of femur) and anteroventral row of about 10 minute peg-like setae on apical half; mid femur ( Fig. 11C View FIG ) with ventral row of 4 large setae on basal half which become larger towards base of femur, these setae blunt apically except basal-most seta which is normal (sharply pointed); femur thickest at insertion of basal-most setae. Fore tibia with ventral surface slightly flattened; mid tibia with a brush of very short, erect ventral setae on apical 1/3; hind tibia gradually and slightly widened toward apex, with a dorsal seta near base, a smaller dorsal seta near 1/3, and a larger dorsal seta near apex. Fore tarsus ( Fig. 11A View FIG ) highly modified, tarsomere 1 broad with 2 dorsal setae near apex; tarsomere 2 apically projecting alongside and partly overlapping tarsomere 3 with two lobes near apex and ventrally with a small darker, more sclerotized area that includes a minute spicule; tarsomere 3 long and slender, slightly bent just before middle, with large arched dorsal seta near middle; tarsomere 4 short, rounded to heart-shaped, arising from near middle of tarsomere 3; tarsomere 5 expanding from a very narrow base. Ratios of tibia:tarsomeres for fore leg: 10-4-4-4-2-4; for mid leg: 12- 6-3-2-2-3; for hind leg: 16-6-4-3-2-3.

A female specimen representing a seventh Enlinia   species occurring at Mitaraka was taken during the expedition (‘sp. GF-007’). This specimen belongs to the distinct E. armata   group whose members possess a row of very short ventral setae on the fore femur and strong dorsal setae on the hind tibia in both sexes ( Robinson 1969) but cannot be confidently assigned to any of the described species. Although this species is likely new, males will need to be collected before it can be formally described. This specimen is briefly characterized below.

Body size 1.2 mm. Antenna, thorax, abdomen and legs brown with brown setae and hairs. Scutum with 4-5 pairs of acrostichal setae; six pairs of dorsocentral setae. Fore femur with anteroventral row of small setae that get stouter and slightly longer towards apex of tibia; with two posteroventral setae near apex. Fore tibia with dorsal seta near 1/3 and one dorsal row of short, closely-spaced setae (length about half width of tibia) along nearly full-length. Mid tibia with 2 dorsal setae near 1/4, one seta at 1/2, and one near apex; with one larger ventral seta at apex. Hind tibia with one anterodorsal seta at 1/4, at 1/2, and near apex; with one row of five rather stout posterodorsal setae along full-length of tibia; with one ventral seta at apex. Wing narrowly oval and with slight brown tinge and evenly rounded margins; veins nearly straight and evenly diverging from base. Halter brown. 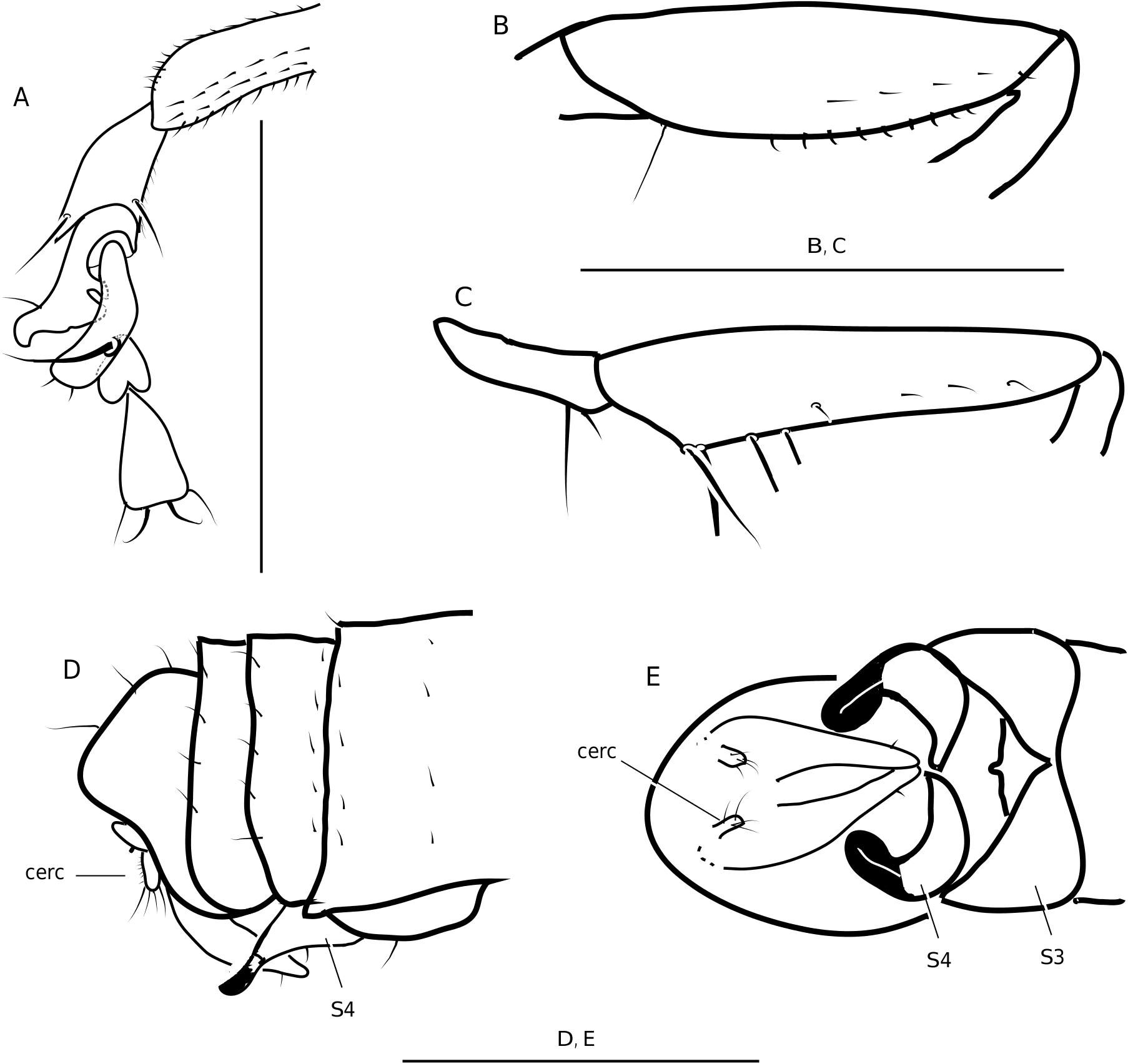 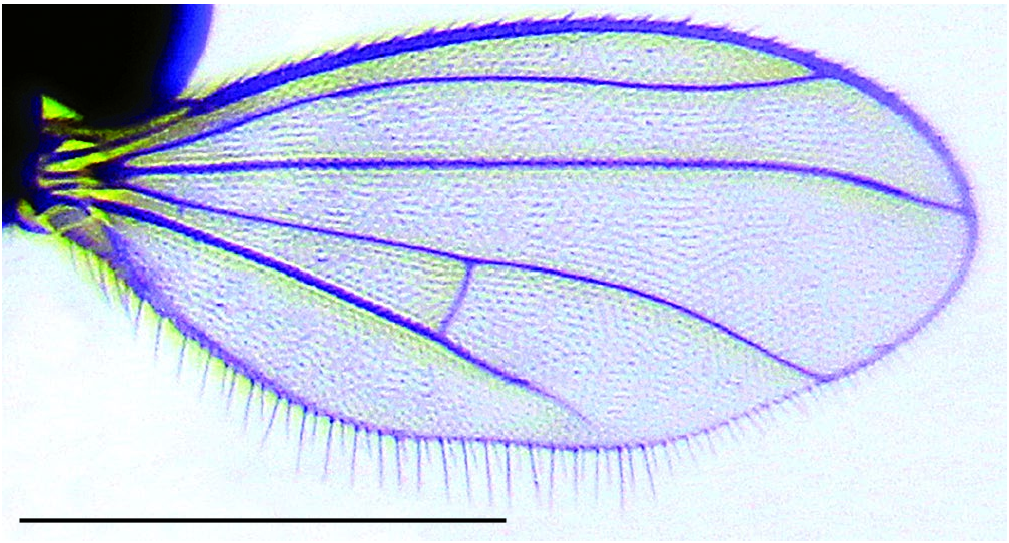