B. tabaci   was originally described by Gennadius (1889) in the genus Aleurodes   , as a pest of tobacco in Greece. It has numerous synonyms that are listed by Mound & Halsey (1978) and Martin & Mound (2007). It is broadly polyphagous, feeding on an estimated 600 plant species and is distributed nearly worldwide. It is a major pest of field and protected agricultural crops and ornamental plants. It is a vector of 111 plant viruses in the genera Begomovirus, Crinivirus and Carlavirus or Ipomovirus ( Jones, 2003).

Habitus. Elliptical, broadly rounded at the base and narrow apically. Cream coloured when first laid, becoming pale yellow and finally golden brown. Red eyes and yellow fat bodies of the first instar clearly visible prior to hatching. Oviposition pattern varies with leaf topography and population density. Eggs are scattered, or in small groups, on the under surface of hirsute foliage, such as Euphorbia pulcherrima   , or laid in neat, partial or complete circles on glabrous, smooth foliage, such as Ficus benjamina   . The chorion is smooth and shiny with little wax evident. Each egg is erect and firmly attached to the leaf surface by a slender peduncle extending from the base of the egg, inserted into the plant tissue. The egg bends slightly as it matures and a longitudinal groove appears on the concave surface. After hatching, the egg remains upright and is golden brown in colour. Hatched eggs can remain attached to the plant for many months. Length 201 microns (172–220 microns), width 119 microns (96–156 microns), ratio of length over width is 1.71 (1.31–2.19). Peduncle length 34 microns (28–42 microns) and width is 8 microns (5–12 microns).

Dorsum. Chaetotaxy comprises paired CeS length 37 microns (3–90 microns); 1 AS length 36 microns (3–108 microns); and 8 AS length 9 microns (3–40 microns). The dorsal setae exist in two distinct states: minute (2–10 microns) or well developed (28–108 microns). The setal pairs most frequently well-developed are CeS and 1 AS, and to a lesser extent 8 AS. Frequently only one or two of the setal pairs well developed, these sometimes asymmetrical with one seta well developed and the opposite seta minute. Approximately eight geminate pore/porettes are aligned sub-dorsally in a longitudinal row. The vasiform orifice is sub oval to rectangular and closed behind; length 36 microns (22–340 microns). Lingula head half-covered by the operculum.

Dorsum. Chaetotaxy comprises paired CeS length 72 microns (5–120 microns); 1 AS length 81 microns (8–142 microns); and 8 AS length 15 microns (2–72 microns). The dorsal setae exist in two distinct states: minute (2–14 microns) or well developed (52–142 microns). The dorsal setae pairs most frequently welldeveloped are the CeS, 1 AS and 8 AS. 8 AS usually occur on the lateral margin of the vasiform orifice but may be displaced antero-laterad, especially when well developed. There may be three other pairs of minute to small subdorsal setae, which vary enormously in their development, and asymmetrical individuals are common. There are also usually four pairs of anterior submarginal setae and five pairs of posterior submarginal setae. The submarginal setae are minute and often very difficult to detect (phase or interference contrast microscopy is required). Geminate pore/porettes are aligned in four longitudinal groups and are also difficult to detect in some specimens. The dorsum is generally smooth, without papillae of projections other than setae. The vasiform orifice is triangular, half-covered by the operculum, and open behind; length 51 microns (40–60 microns). The lingula is spatulate with two terminal setae, the distal portion is covered in spicules, and it is half-covered by the operculum.

Ve n te r. Derm of thoracic tracheal folds usually with numerous, minute spinules which extend around the mid leg to the mesothoracic spiracle. Coxae each with an adjacent minute spine-like seta; mid and hind coxae each with a long fine seta. Antennae length 17 microns (14–22 microns). Cuticle diaphanous and smooth.

Body yellow, wings hyaline, covered with sparse, powdery wax. Antennae 7 -segmented. Antennal segment II about half as long as antennal segment III; antennal segment III about as long as segments IV–VII combined; segments V–VII subequal, segment IV shorter. Segment II with long, slender, conical sensorium (difficult to distinguish from the enlarged setae). Segment III with one sensorium located on the proximal portion, and three sensoria (a cone and two rhinarial-types) on the distal portion. The cone is approximately a quarter to a third the segment length away from the apex. Segment IV without a sensorium; segment V with an distal rhinarial-type sensorial; segment VI with a subapical sensorial cone, and segment VII with both a sensorial cone and an adjacent rhinorial sensorium, arising near the middle of the segment and the segment terminating in a narrow conical sensorium. Upper eye composed of 40–45 ommatidia, each 8.0 (6.8–9.5) microns in diameter; lower compound eye composed of 31–32 ommatidia, each 10.5 (8.9–11.9) microns in diameter, arranged in interconnected groups of 6 pigmented ommatidia surrounding a clear, smaller ommatidium. Upper and lower eyes connected by a single clear ommatidium. There are rare examples of the upper and lower eyes separated by less than a diameter of an ommatidium. Metatibial combs consisting of 16–19 setae, all tibial brushes consisting of two or three adjacent setae. Male claspers paired, with about 12 long setae. Aedeagus ventral base smooth; distal portion gradually tapered, gently sinuous with tip curved upwards. Male collar and female gonapophysis and supragenital plate unpigmented. Female cement gland usually strongly sinuous, without bands and with a small head. 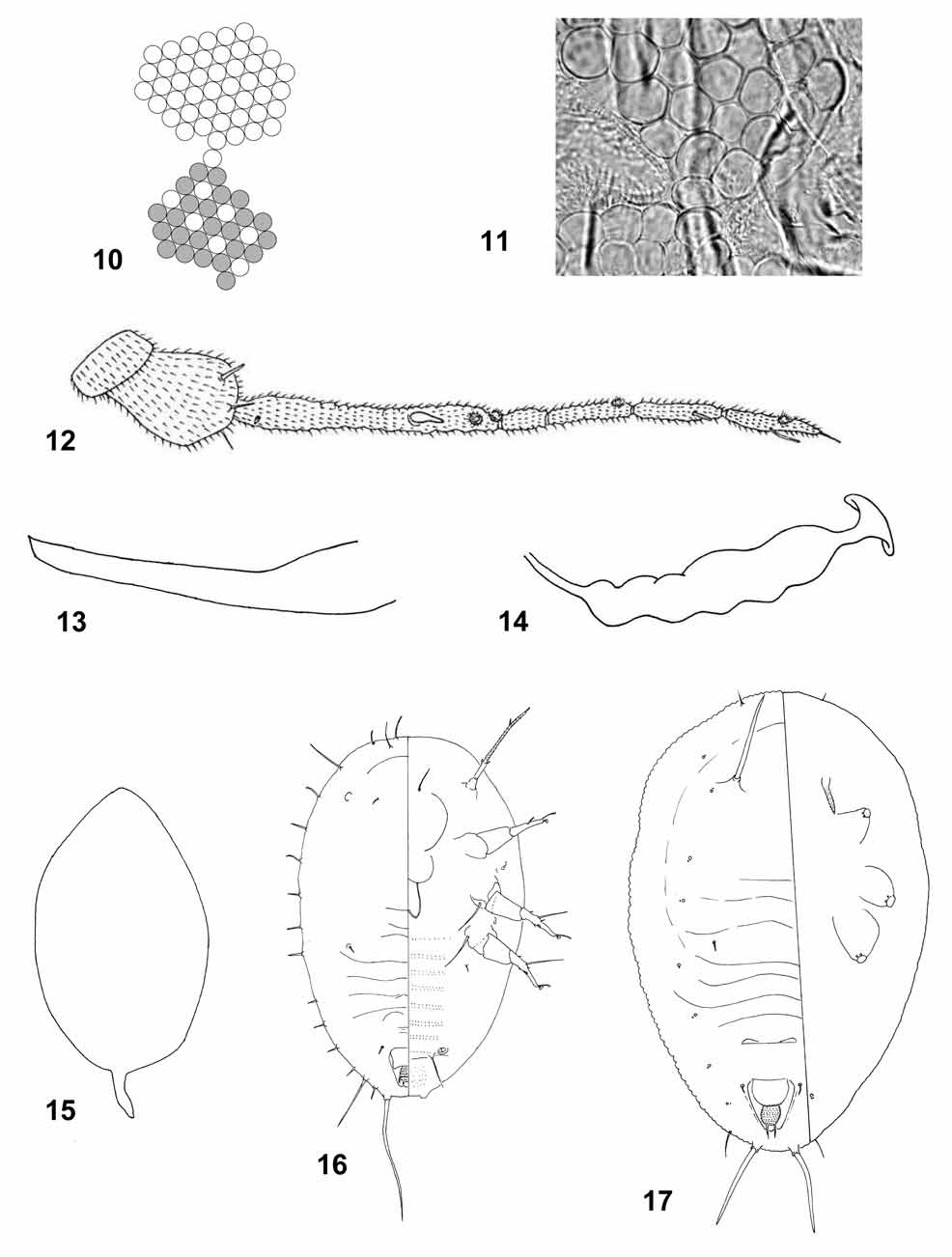 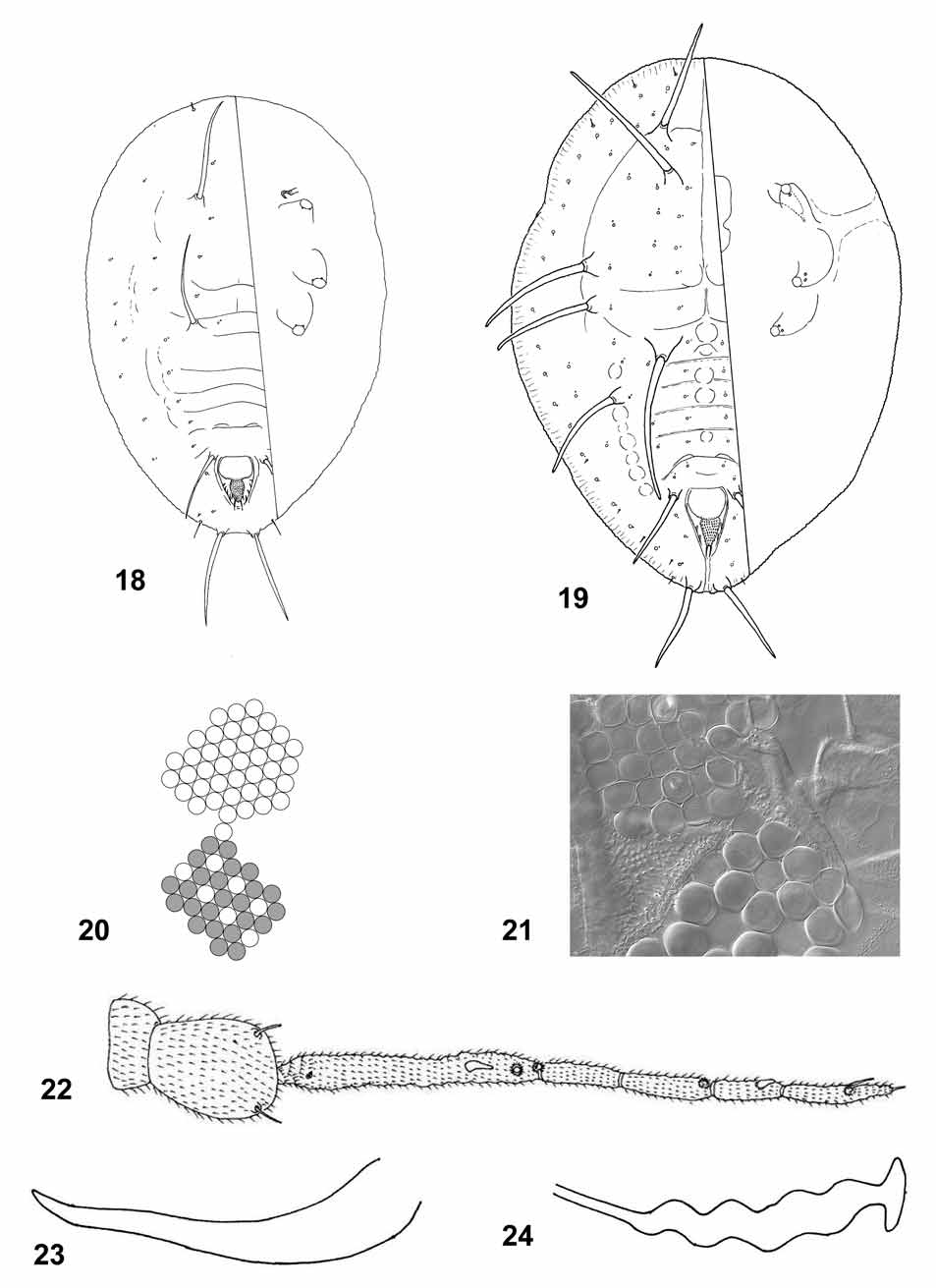