Diagnosis (male): Small species (11–12mm) with yellow head and yellow patagia, the latter with red spots. Brown tegulae with reddish spots. First pair of wings brown with iridescent purple scales, and with several yellow spots of reddish edges. Second pair of wings with a soft reddish hue and part of the edge of the termen brown. Abdomen red dorsally and white ventrally.

Description male ( Figs. 25–26 View FIGURES 25–26 ) and females. Forewing span; 11–12 mm (n=12). Head: Frontoclypeus yellow, the upper part with brown scales on the sides, underneath the antennae. Vertex yellow, with groups of red scales at the base of the antennae, in the anterior part, above the brown scales. Red scales on the lateral parts of the vertex and occiput. Palpi with the first segment yellow and red scales on the external lateral side. Second and third segments red, with the front brown and the inner part yellow. Antennae bipectinate, with scape and pedicel presenting yellow and red scales. Flagellum brown with of red scales present towards the base and white scales in the distal quarter. Thorax: Patagia yellow, bearing a brown spot in the anterior part of the ectal margin. Adjacent to this, a red submarginal band runs from the anterior to the posterior side and then all along the edge back to anterior side. Tegula brown in the anterior part; the posterior side and mesal margin, red; the posterior part and ectal margin, yellow. Mesoscutum brown, with presence of a small triangular red spot in the central anterior part; red spots on the central and lateral parts of the ectal margin. Metascutellum brown. First pair of legs yellow, with the front of the coxae, the dorsal sides of the femur, tibia and tarsi, reddish. Second and third pair of legs yellow. Forewing: Dorsal surface brown with an iridescent bluish reflection. It bears yellow and red spots. A yellow spot near the base of the wing, surrounded by an irregular red band. The contour comprises near the base of the wing and below the costal margin, reaches the inner part of the base of the discal cell, crosses the Cu, projects up to below the 1A and 2A, extending towards the base of the wing. Red at the base of the R and the 1A + 2A. A bulging area at the base of the wing: below the Cu, the first quarter of the Cu2-1A. Two spots of red contours and inner part yellow: one in the central part of anal cell reaching the posterior margin; the other in the posterodistal part of the bulging area, on Cu2- 1A. A large spot, of red contour and yellow inner part, located in the anterior and central part of the wing: originates from the proximal third of the wing, in the costal margin, extends obliquely towards the external margin, reaching the posterior angle of the discal cell, where M2 and M3 arise, crosses the middle part of the Cu1-Cu2, then ascending, across the Cu1, M3 and M2 up to the sixth part of the M1, from where it projects up to the apex. Termen yellow. An irregular patch alongside the termen, with the inner edge red and inner part yellow: arises near the tornus, rising sinusoidally to become wider in M2-M3, where it also closes until it reaches the termen, spot rises again obliquely towards the inside of the wing, crossing M1, to become wider in R5-M1, Describing a last curve this crosses above, heading towards the termen but not reaching it, from where it rises obliquely reaching the middle part of R4-R5. A red spot, near the tornus, another near the base of the R5-R4 and another one in R5-M1. Retinaculum reddish yellow. Ventral surface yellow, with the spot located on the termen with the same characteristics as the dorsal side, except for the colors that are not intense. A central brown spot, running from the costal margin down to the tornus with red edges on each side: the first one with the red edge projecting towards the tornus and the second one comprises part of the discal cell, reaching up to the costal margin and running down to the base of the wing. The proximal half of the wing, yellow, with the presence of a cleft corresponding to the described area of the bulging area on the dorsal side. This cleft shows tufts of yellow androconial hairs. Retinaculum yellow with brown scales. Hindwing: Dorsal surface yellow, from the costal margin, which is lobulated, to the Cu, reaching the M3. A brown edge from the M3, becoming thinner and reaching 2A. The rest of the wing with a soft reddish hue. Ventral surface yellow with the same characteristics regarding the brown spot on the dorsal side. Abdomen: Dorsal side red, with yellow scales in the posterior and central part of the first sternite. The other sternites have yellow scales on the posterior edges. Yellowish white ventral side. Male genitalia ( Figs. 27–30 View FIGURES 27–30 ) (Genitalia # JGA 560, 750, 761): Saccus thick, curved and oblique pointing to the left side. Tegumen with elongated sides, sharpened towards the anterior part, where they join the vinculum. Towards the posterior side bearing small projections at the sides of uncus. Uncus thin, elongated, curved in ventral direction, showing thickening in the ventral part, sharpened and sclerosed towards the distal part. Bearing setae on the dorsal part, more abundantly towards the base. No setae on the distal part. Sacculus oblong, with short setae in its distal margin. Valvae notoriously asimmetrical, with the end of the left one twice as wide as that of the right one. Aedeagus the size of the genital armature. Vesica Short vesica, about one third the size of the aedeagus, with small spinules towards the base and smaller distally. Female: Unknown.

Etymology: kotolnuki   is a singular genitive noun, dedicated to Marci Kotolnuk for being one of the first collectors of the new subspecies at Refugio Amazonas Lodge.

Distribution: Known from the department of Madre de Dios, southeast of the Peruvian Amazon.

Barcoding: The access number to Genbank is MG837877 View Materials . The mitochondrial DNA sequence ( COI) of one of the paratypes is as follows(Voucher MUSM – Arctiinae   VB # 166):

Remarks: The genus Paranerita   was created by Hampson (1901), having as type species Evius polyxenus Druce, 1883   from Sarayacu ( Ecuador). Seitz (1922 –1925) recorded in his catalog 35 species for the genus, and Watson & Goodger (1986) recorded 46. The classification provided by Hampson (1901) and largely followed by Seitz (1922 –1925) is based on wing venation, traits that have not helped to objectively determine natural groups.

The genus Neritos   was created by Walker (1855) having as a type species Neritos repanda   , with a specimen coming from Rio (Rio de Janeiro, Brazil). The genus Trichromia   was created by Hübner ([1819]) considering the species described by Cramer (1777) as Phalaena onytes   , with individuals coming from Suriname. Hampson (1901) does not treat Trichromia   as such, stating textually that Trichroa   is a synonym for Neritos   . In fact there was a confusion of names that was warned by Fairmaire (1894). Hampson ´s Trichroa   (1901) refers to the genus Trichromia   , knowing that the first is a genus of beetles.

Hampson (1901) had much influence on later works and that was apparently the reason why Trichromia   was forgotten. The majority of species related to Neritos repanda   were described under this genus. Thus, by the 1980s, of the 51 species recorded by Watson and Goodger (1986) belonging to the genus Neritos   , 38 of them were described under this genus and none under Trichromia   . Seitz (1922 –1925) did not consider the genus Trichromia   and Watson & Goodger (1986), stated that this together with Neritos   were congeneric, but that the taxonomic position of many species was uncertain, reason why they chose to maintain Trichromia   for the type species and to add another species previously described by as Trichromia Toulgoët (1982)   .

There are no phylogenetic studies of the genera mentioned to support Toulgoët’s (1991) decision to synonymize all of these genera under Trichromia   . It is most likely, due to the diversity of forms, coloring patterns and external and internal morphology, that Trichromia   , as currently treated, is polyphyletic.

Many species, after the work of Hampson (1901) have been described under a certain genus considering the external morphology and the pattern of wing coloration and that have been compiled under different criteria in the latest available catalogs ( Watson & Goodger 1986, Vincent & Laguerre 2014), which has created some controversy. This is what happens with somewhat similar genera such as Paranerita Hampson   , Hyponerita Hampson   , Neritos Walker   , Trichromia Hübner   and Parevia Hampson. Watson & Goodger (1986)   considered 46 species within the genus Paranerita Hampson   , which require careful study to see if they really belong to the genus. Apparently, the species P. polyxenus   and P. polyxenoides   belong to a complex, considering the subspecies that are under the first species that it is necessary to elucidate.

The species P. complicata Schaus, 1905   was described with a male specimen ( USNM 8628) of Saint Jean, Maroni River ( French Guiana). It was transferred by Toulgoët (1991) to Trichromia   and maintained as such in the work of Vincent & Laguerre (2014). I keep the species within the genus Paranerita   , due to the fact that at the moment no phylogenetic studies exist that support the change to Trichromia   and because reviewing the genitalia of specimens of E. polyxenus Druce   and T. onytes ( Cramer, 1777)   ( Phalaena   ) which are type species for their genera, there are significant differences, so I believe it very unlikely that they are not congeneric.

The traits of the genitalia can be observed in Watson (1971), who has made the dissection of the male holotype. The new species differs from P. complicata   in the yellow medial area on which wing being narrower towards costal margin, as well as the yellow area below M2, M3 and Cu1 being narrow. Almost at the center of this area, where the M2 originates, they do not present a dot of brown and red scales, which is observed in complicate. The hindwings of kotolnuki   with a wide brown edge from M3 to 1A+2A. Regarding the genitalia, kotolnuki   bears notoriously asymmetrical valvae, with sinusoidal inner margins, and the end of the left valva twice as wide as the right one; in complicata   , valvae are almost simmetrical and not wide at the distal end. Vesica in kotolnuki   bears spicules from the base to the distal area, whereas in complicata   , spicules are only observed on the latter. 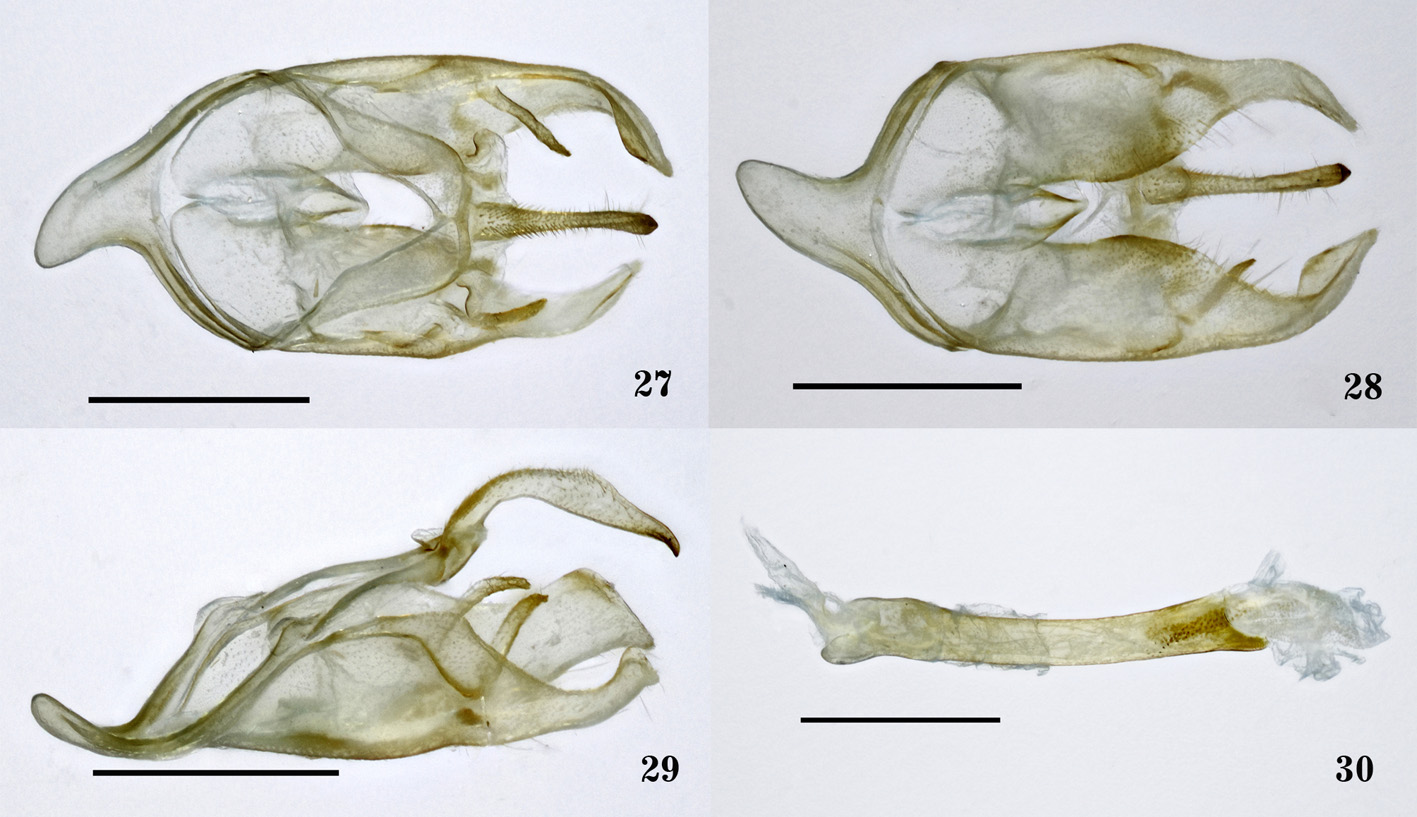