Etymology:—Named after Rebecca Guenther, UC Berkeley, in acknowledgement of her support to tree fern studies.

Regarding the fronds, C. guentheriana is best described as C. xenoxyla Lehnert (2003: 175) but with a darker hue. The laminar dissection and the spatial orientation of the pinnae are identical but the petiole scales of C. guentheriana are very shiny, almost concolorous black (vs. weakly shiny dark brown to castaneous with usually paler margins in C. xenoxyla ) and the leaf axes are dark brown to purpureous and weakly shiny (vs. green in fresh material, stramineous to brown in dried material). Cyathea xenoxyla differs significantly from C. guentheriana by having almost no persistent petiole scales (only present in crosiers, rarely on young petioles vs. many persistent scales on the petiole bases in C. guentheriana ), lacking a fascicle of petioles at the trunk apex (vs. fascicle present), having smaller sori (0.8–1.0 mm vs. 1.0– 1.2 mm diameter), and having thinner trunks with adventitious buds (mostly 5–8 cm vs. to 12 cm diam., lacking adventitious buds).

The deeply crenate segment margins, the kind of scurf squamules, the fragile indusia, and the colour and shape of the petiole scales of C. guentheriana agree well with the condition of these characters found in C. crenata ( Sodiro 1883: 18) Christ (1897: 323) (see: Lehnert 2009). The most obvious differences to that species are the darker colour of petioles, rachises, and laminar tissue and the stiffer, notably ascending pinnae. Due to the divergent colour of the petiolar cortex (atropurpureous in C. guentheriana vs. dull brown in C. crenata ), the petiole scurf appears to be lighter coloured in C. guentheriana , but actually has the same colour variation in both species. Furthermore, C. guentheriana has no or only scattered hairs to 1 mm long on the costules abaxially while C. crenata is here often short-pubescent with hairs to 0.6 mm long. The laminar indument of C. crenata includes larger bicolorous flat scales to 5 mm long with dark centres besides smaller, concolorous whitish to pale brown squamules, whereas C. guentheriana lacks bicolorous scales on the laminae. The indusia of both species are very fragile but differ in colour (matte white in C. crenata vs. tan in C. guentheriana ) and consistency (opaque, sometimes developed as mucose film vs. translucent, never a mucose film). Differences in colour and indument are often dependent on growing conditions, especially the exposure to direct sunlight. However, the colour of petioles and leaf axes of C. crenata remains comparatively pale no matter if the species grows in either sun or shade. Cyathea guentheriana has been found only in the shaded understory so far, thus growing under conditions unlikely to add a reddish tone to a relatively pale coloration as it is found in sun-exposed C. crenata .

Despite the apparent mixture of characters typical of several common species in Cyathea guentheriana , there are no indications of a hybrid origin of this species. Sporangia and spores are well formed and of equal size, indicating a regular development involving matching chromosome pairs. 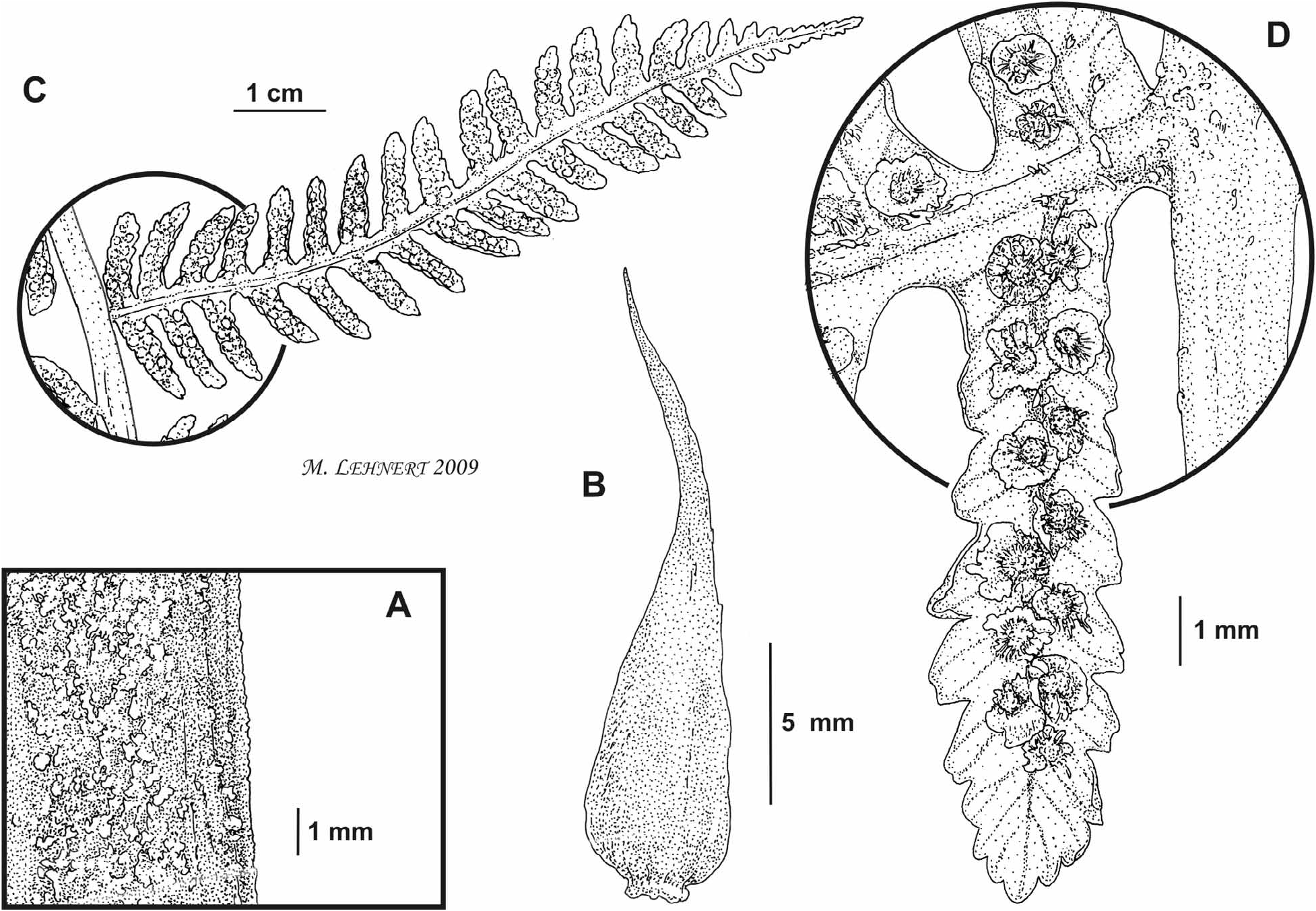