The calcitrans group of the genus Maratus

The five known members of the calcitrans group, all from eastern Australia, are quite distinct ( Figures 37- 38 View Figure 37 View Figure 38 ). Males of all species in this group display a fan bearing a pattern of bold transverse stripes, and all display a single leg III to the female during the fan dance. In M. plumosus the elevated and extended leg III is contralateral to the direction that the fan is rotated during display, and in M. sceletus the elevated leg III is held in a flexed position. The anterior surface of leg III of M. plumosus (iridescent blue) and M. sceletus (prominent black stripe) appears to figure prominently in their displays, whereas the movement of leg III appears to be of more importance in the other three species. All except M. plumosus inflate the posterior opisthosoma and two pairs (median and posterior) of spinnerets during this display. The extent to which these inflated spinnerets are moved during display varies from very rapid in M. sceletus to almost no movement at all in M. jactatus . M. plumosus has ordinary spinnerets, but special plume-like extensions at the posterior end of the fan have the appearance of spinnerets (Otto & Hill 2012, 2013).

Three of the species in this group have lateral opisthosomal flaps that can be used to extend the width of the fan during display, but these are quite different from each other. The flaps of M. jactatus are narrow and represent simple extensions of the fan. Those of M. digitatus are semicircular with dull-green iridescent scales that contrast with those of the dorsal plate, and do not appear to play a major role in the fan dance itself, when they remain folded or retracted (Otto & Hill 2012). M. plumosus males have more complex flaps, including an eye-like, circular posterior portion, and the flaps on each side are usually extended only when the flaps of the opposite side are retracted. The appearance and use of the pedipalps by M. sceletus in display is unique. The fan dance of all species in this group is assymetrical, alternating between display to the left or to the right side. Figure 37. Localities where the five members of the calcitrans group have been found, including records reported by Otto & Hill (2012, 2013) and other records recently communicated to us. The spider associated with the most northerly record shown here (locality 1, cf. digitatus) is similar to southern representatives of Maratus digitatus but differs from these in several characters and could be considered a separate species, subspecies, or variety. 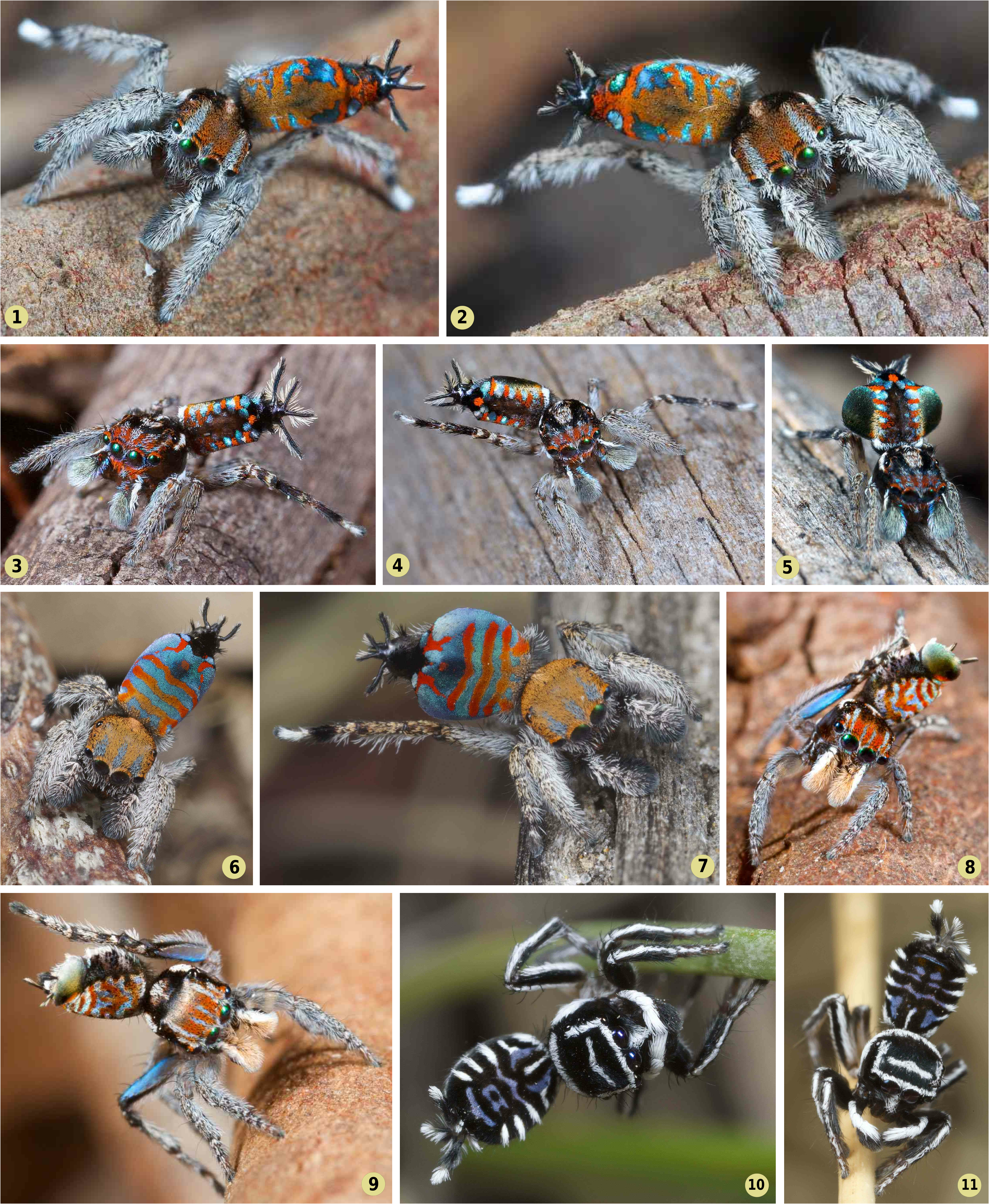