Etymology. Named for Dirk Hartog, the Dutch ship commander, who landed at the type locality in Shark Bay in 1616, thus becoming the first European to land on the western coast of Australia.

Distribution. Known from Western Australia, from Shark Bay north to Mundabulleagapa, south of Port Hedland. May possibly extend further south as far as the Houtman Abrolhos Islands which are classified by Duke (2006) as having the same type of “Ephemeral Arid Embayments” mangrove habitat.

Parasesarma hartogi   sp. nov. differs from all other similar Parasesarma species   by its carapace shape, which is significantly broader between the epibranchial angles, whereas other species appear to be widest across the exorbital angles (or at least equally wide at this point). In addition, the epibranchial angles of P. hartogi   sp. nov. are unusual by almost forming a tooth in some individuals, though always remaining obtuse despite being acutely prominent. In this character P. hartogi   sp. nov. certainly begins to approach species in its sister-genus Perisesarma   . Mature males of the new species also seem to develop a significantly larger gape between the fingers than do the other species of the Parasesarma plicatum   species-group (c.f. figures in Rahayu & Ng 2010).

The true Parasesarma plicatum   from the eastern Indian Ocean is easily separated as it has a greater number of more prominent dactylar tubercles (11–14), although as with P. hartogi   , the proximal ones are smaller, and the distal ones become very low.

Parasesarma affine   , so far known from Japan, China, Taiwan and Hong Kong, is similar to P. hartogi   sp. nov. in having 8 or 9 dactylar tubercles, but in P. affine   these tubercles are also proportionately larger, more prominent, and have a narrow, transversely subovate median flattened ridge marking the highest point. Furthermore, the G1 apex of P. affine   (see Rahaju & Ng 2010, fig. 7A–D) is somewhat different, with the shaft more evenly tapering distally, and the tip, while bent at a similar angle, has its outer distal edge straight from the base such that it lacks the more clearly defined and narrower snout of P. hartogi   sp. nov. ( Fig. 3C, D View FIGURE 3 ) Life colours are also quite different (compare Fig. 4 View FIGURE 4 with Rahaju & Ng 2010, fig. 8).

Parasesarma ungulatum   is the most widely distributed of the members of this species-complex, occurring from western Thailand, through the central Indo-Malaysian region and north to Hong Kong. It can be easily separated from P. hartogi   sp. nov. by the greater number of dorsal dactylar tubercles (10–12). Like P. hartogi   sp. nov., these are small proximally, becoming larger distally, but all tubercles are distinct, subcircular, marked with fine transverse lines, and carry a transverse ridge on the tip. The G1 tip is also markedly different, being only slightly bent distally and the corneous apical portion is very broad and stout ( Fig. 3C, D View FIGURE 3 ; cf. Rahaju & Ng 2010: Fig. 10A–D).

Parasesarma dumacense   , currently only known from the Philippines, has the same number of dactylar tubercles as P. hartogi   sp. nov., but they are relatively more prominent, and the apex of each tubercle is marked by a narrower, flattened ridge. In addition, the greatest carapace width is between the exorbital angles in P. dumacense   (further back between the epibranchial angles in P. hartogi   sp. nov.); the male G1 is less bent and the corneous distal portion is broader; and the live colours differ, with the claw of P. dumacense   being predominantly bright orange yellow, and the carapace patterned with blotches (compare Fig. 4 View FIGURE 4 with Rahaju & Ng 2010, fig. 12). 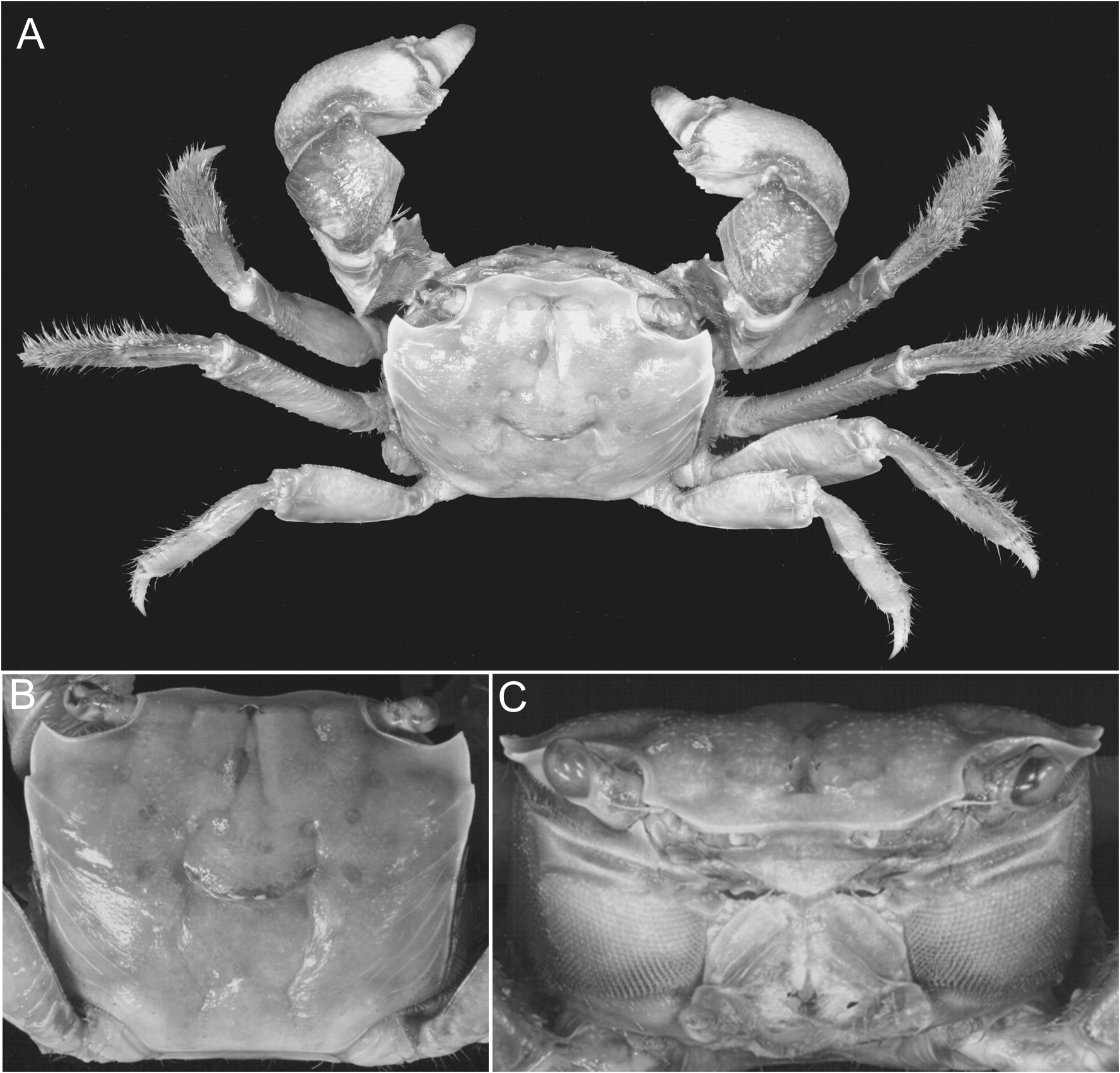 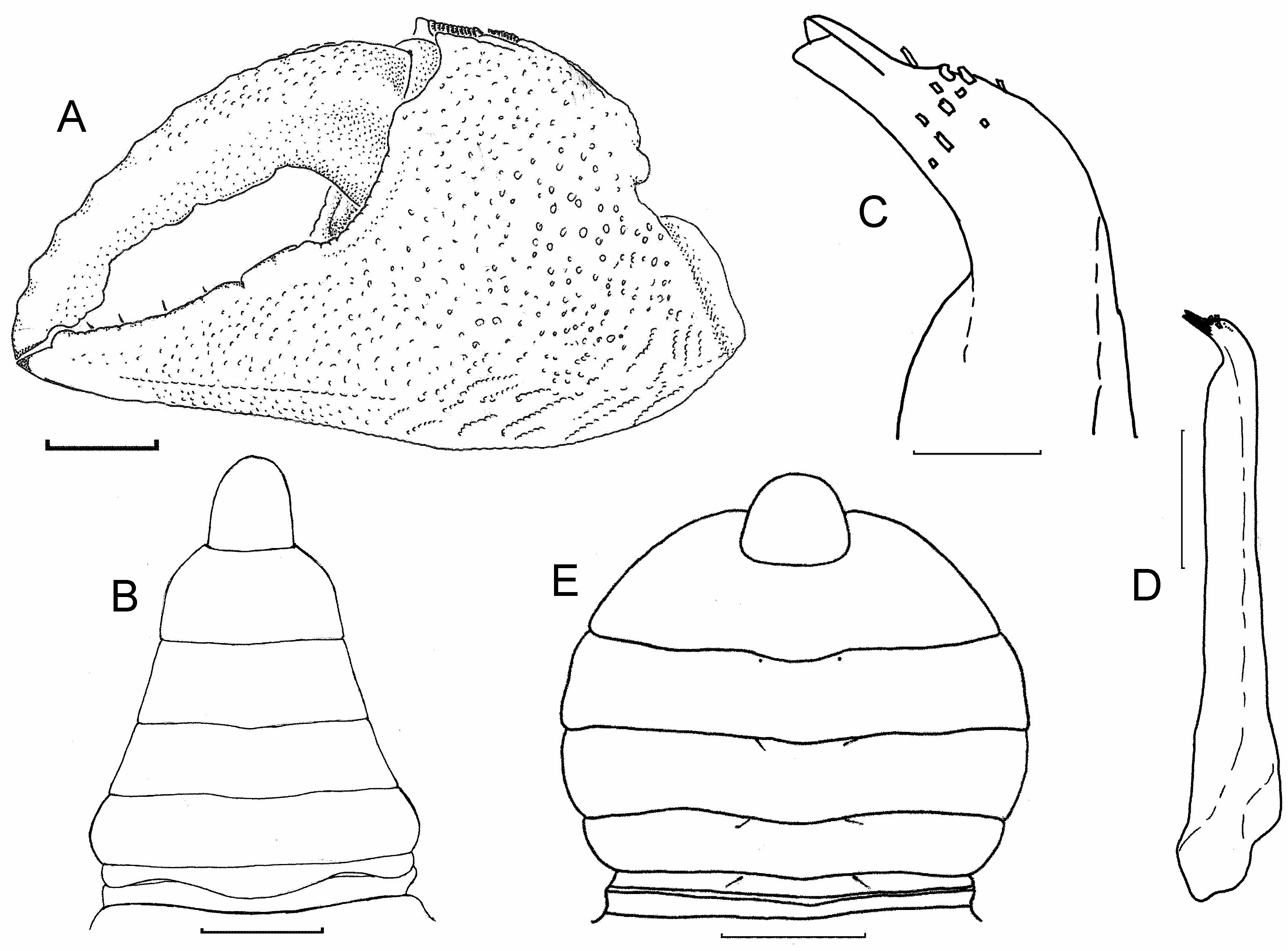 FIGURE 4. Parasesarma hartogi sp. nov., variations in colour (specimens were all unpreserved and recently dead): A, B, moderate size male, showing typical pale fawn to orange colour with darker orange claws; C, slightly larger male, and somewhat darker; D, E, large male showing dark red-brown carapace, and dark maroon chelipeds with distinctive bright orange patches around base of gape, on base of dactyl, and around inner margin of carpus; the presence of these contrasting colours in large specimens appears characteristic of the species, but the pattern and extent of coverage is variable amongst individuals. All photographs relate to specimens examined, but were not cross-referenced to individuals in the field.