Etymology. Dedicated in tribute to Mario Vargas Llosa, Peruvian writer and Nobel Prize winner in Literature 2011. Mario Vargas Llosa was born in Arequipa, Peru as N.H., and lived in Bolivia (as the current range of N. vargasllosai   ) the first years of his childhood until he returned back to Peru. He studied Laws in the Universidad Nacional Mayor de San Marcos, alma mater of V.P. and N.H.

Skull. ( Fig. 10 View FIGURE 10 ) Dorsal view. Rostrum is narrow, laterally flattened. Anterior borders of the nasals are rounded. Posterior borders of the nasals are irregularly square shaped; placed behind both premaxillary-maxillary-frontal and maxillary-frontal-lacrimal joints. Sutures between maxillary and frontal bones are large and numerous. Zygomatic notch is shallow and encloses partially the lacrimal foramen. Lacrimals are rounded; one-half is on the frontal and other in the zygomatic. Interorbital beads are poorly developed. Flanks of interparietal are not projected.

Lateral view. Skull profile is slightly convex. Rostrum presents a small hump. Gnathic anterior process is short. The most anterior part of the suture between nasal and premaxillary bones passes the squamosal root of zygomatic. Breadth of the maxillary root of zygomatic is as M3 length. Zygomatic plate breadth is subequal to the upper molar row length. Squamosal zygomatic root breadth is one-half of the zygomatic plate breadth. Ethmoid foramen is placed among the metacone of M1 to mesoloph of M2. Sphenopalatine foramen is placed at metacone of M2 level; its diameter is subequal or slightly greater than M3 length. Ethmoturbinals breadth is as M1 length. Alisphenoid strut is always absent. Tegmen tympani do not overlap the posterior process of the squamosal. Orbicular apophysis of the malleus is globose and elongate; the lamina is rectangle and shallow. Processus brevis of the incus is large, subequal to incus breadth. Internal surface of mastoid tubercle is concave. Upper border of postglenoid foramen is rounded, at subsquamosal foramen level is tapering; both foramina reach the upper border of the mastoid. Hamular process is narrow, as the orbicular apophysis breadth. Mastoid perforation is placed on the posterior border, similar to M3 length, and square shaped.

Ventral view. Inner borders of the incisive foramina borders are posteriorly convergent. Incisive foramina breadth is about as M1-M2 length. Septum of incisive foramina is narrow. Diastema is flat with a small and elongated hump, placed behind of the premaxillary-maxillary suture. Origin of the superficial masseter is ovoid and slightly protruded; it is placed behind of the anterior border of the zygomatic plate. Maxillary-palatine suture is at hypoflexus level of M1. Posterior palatine foramina are at the hypocone level of M1. Posterolateral palatal pits are placed anterior to the mesopterygoid border level. Sphenopalatine vacuities are open around basisphenoid and presphenoid. Presphenoid is laterally compressed with concave lateral borders. Mesopterygoid fossa breadth is lesser than the incisive foramina breadth. Parapterygoid processes are parallel; laterally, they pass the molar surface level. Borders of the pterygoid plate are convex. Fontanellae are tiny but distinguishable. The posterior opening of the alisphenoid canal breadth is as M3 length. Groove of the infraorbital branch of the stapedial artery is shallow.

Middle lacerate foramina width is as M3 length. Eustachian tube is short and broad. Bullae are flask-shaped. Anterior bulla process and the pterygoid plate are not in contact. Basioccipital breadth at petrosal level is subequal to breadth between second upper molars. Basioccipital pits are shallow. Anterior border of the foramen magnum is obtuse V-shaped with a moderate notch.

Remarks. Thomas (1901) reported this species from Inambari River ( Peru) to Mapiri and Perené rivers ( Bolivia), but not specified additional information. Pacheco et al. (2011) recorded populations of N. vargasllosai   sp. nov. as N. spinosus in Challohuma   (1200 m) and Yanacocha (1985 m); both localities present yields of citrus fruits, and are placed in the vicinities of the Parque Nacional Bahuaja Sonene ( Peru). Adult males with scrotal testis were found from 9 to 21 May 2010. In the same period, female specimens with perforated and non-perforated vagina were found, but none pregnant or lactating. There is not additional information about the biology of this species. 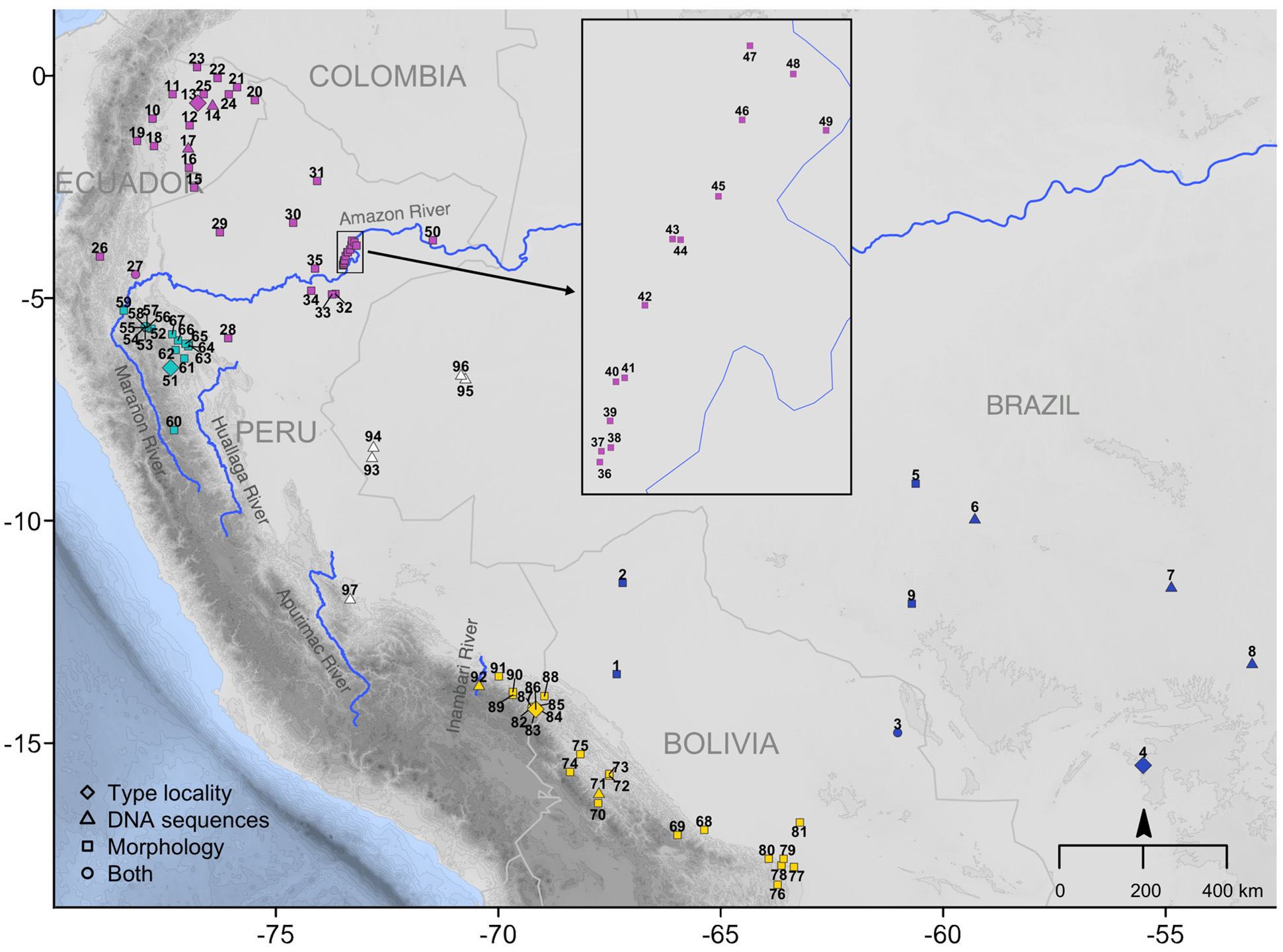 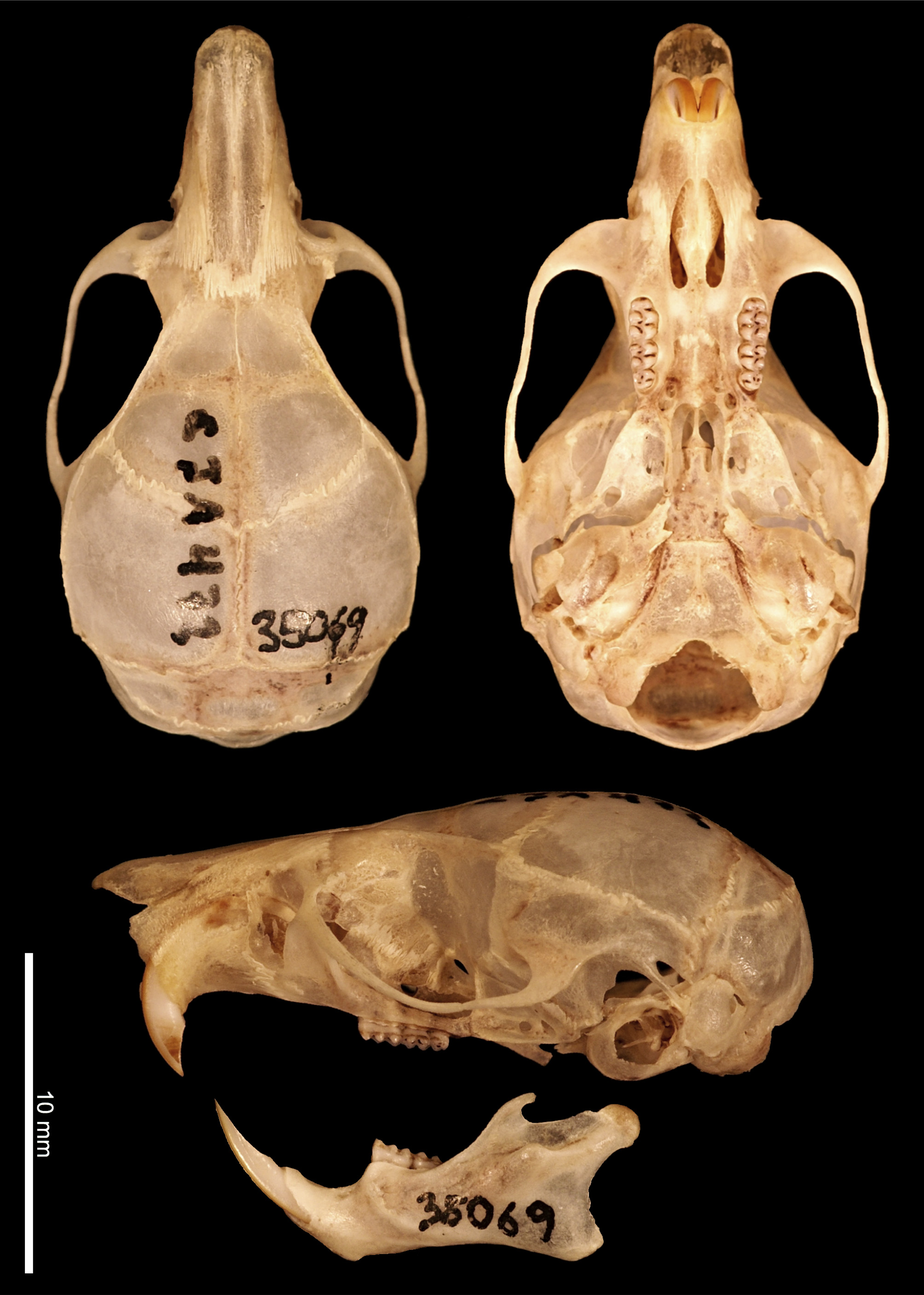 FIGURE 10. Dorsal, ventral, and lateral views of the cranium and the mandible of Neacomys vargasllosai sp. nov. (MUSM 35069, holotype).

TABLE 4. Measurements of the type series of Neacomys vargasllosai sp. nov. from Sandia, Puno, Peru. The number in the column heading is the MUSM catalogue number. Age and sex are in parentheses, f = female, m = male.