The individuals of this species reach 4 cm in length, and are typically fixed by the ventral side, with both siphons close together in the flat upper surface. The species often forms clumps on top of artificial substrates or other ascidians. The tunic is hard and vivid orange in colour. In live specimens, the siphons are quadrangular, with four broad white-yellow stripes on a reddish background. In-between the wider stripes there are other fine and incomplete whitish bands. The internal tunic of the siphons has wide and blunt siphonal spines.

The mantle is muscular and strong. The inner part of the atrial siphon bears a velum with small papillae. The internal organization is typical of a styelid, with simple tentacles, simple dorsal lamina, and four branchial folds. The number of longitudinal vessels on the folds is between 8 and 11, with 2–4 vessels between folds (and none between the dorsal-most fold and the dorsal lamina). The digestive has an ovoid stomach and an intestine forming a rather closed primary loop and a marked secondary loop. There are endocarps in the primary and secondary loops.

The gonads are characteristic of the species. On the right hand side they form an anastomosed mass of tubular gonads along the ventral midline. A few gonoduct apertures can be seen, facing different directions. On the left the gonad also forms a mass, but much smaller, anterior to the upper part of the intestinal loop.

Remarks. the species has been reported from the Juan Fernandez Islands as Cnemidocarpa robinsoni (Van Name 1945)   . Clarke & Castilla (2000) found it for the first time in continental Chile (Antofagasta Bay). This southern hemisphere species has been introduced into European waters (Bishop et al. 2013). FIGURE 8. Asterocarpa humilis. A, some specimens on Pyura chilensis (orange papillae belong to P. chilensis tunic); B, close up of the siphons (a colony of Diplosoma listerianum grows on the tunic); C, dissected individual; D, close up of the digestive loop, branchial sac removed; E, gonads of the right-hand side, branchial sac removed. The specimens in C – E have been stained. Scale bars: A, 2 cm, B, 1 cm, C, 1 cm, D, E, 1 cm. 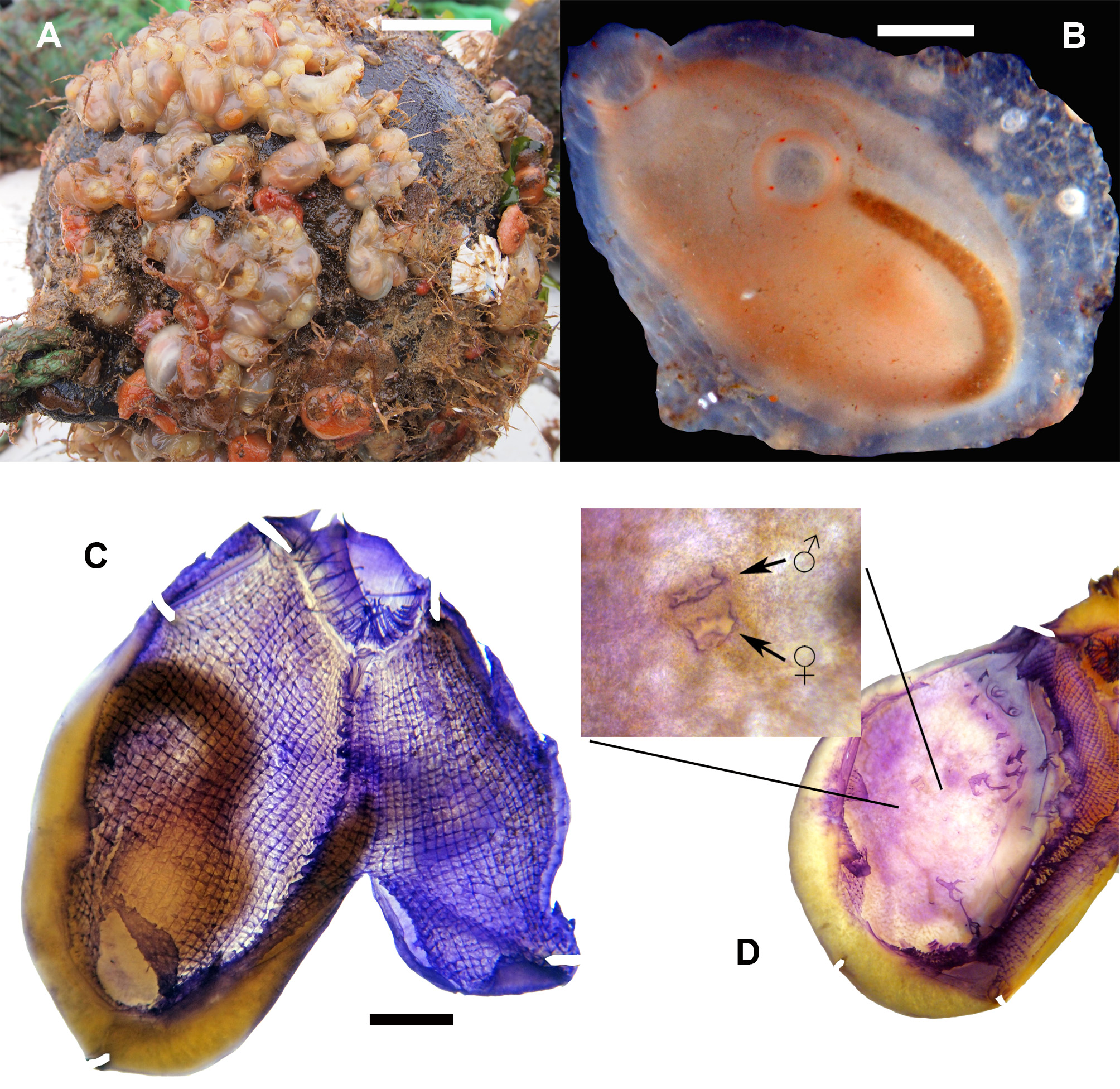