Holotype: a colony has been designated as the holotype and deposited in the Museo Nacional de Historia Natural de Chile (code MNHNCL TUN- 15001). Two other colonies (paratypes) are kept at the Biological Collections Room of the Universidad Católica del Norte (SCBUCN 3962).

Several colonies of this new species have been found in the lower intertidal in the Coquimbo area. They form thick carpets by the union side by side of elongated zooids, reaching 17 mm in height. A single colony may cover hundreds of square centimetres. The tunic is of a clear brownish colour, and the siphons are pigmented in red. Small zooids appear in between larger ones, attached to their tunics. Thick stolons are found at the basis of the colony.

The tunic is thin but firm. The zooids have a weekly muscular body wall that allows the observation of some internal features. There is an inner oral velum and about 16 tentacles (big and medium size). The aperture of the neural gland is oval-vertical. There are 7 longitudinal vessels to the right and 4 (sometimes 5) to the left. Parastigmatic vessels cut the stigmata (up to 10 per mesh). Sometimes there are 2 and even 3 parastigmatic vessels between two consecutive transverse vessels. The digestive system forms an open primary loop, with a long and straight intestine reaching anteriorly towards the atrial siphon and ending in a smooth anus. The stomach has 12–16 folds and a pyloric caecum.

There are several endocarps (6–8) attached to the body wall at each side, round or elongated. Up to 18 gonads can be found on the right hand side, forming a row adjacent to the endostyle. The gonads are hermaphrodite and elongated. The male portion is basal and forms most of the gonad, and the female portion lies distally and apically. There is a short and wide oviduct opening distally with a scalloped aperture, and a long and thin subterminal spermduct. To the left there are only 5–7 hermaphrodite gonads between the endostyle and the ascending intestine. Some zooids brood larvae in the peribranchial cavity. The larval trunk length is up to 0.65 mm. When mature, the larvae feature a ring of tubular anterior ampullae (6–7 pairs), three conical adhesive papillae, and a single pigmented spot.

Remarks. Monniot (1970) established a tabular key for the known species of Polyzoa . None matches the characters observed in the Chilean specimens. In particular, the number of longitudinal vessels falls within the variability of P. minor alone (Monniot 1973), a different species in terms of size, colony form, number of gonads and larval morphology. The only species featuring zooids joined together and of the size found here is P. opuntia , but it has consistently 8 longitudinal vessels per side, among other differences. On the other hand, and based on the COI sequences obtained here, P. iosune forms a well-suported clade (Neighbour Joining tree, results not shown), sister to the clade of P. opuntia sequences, with which it features 8–9 % sequence differentiation. Species described more recently such as P. e xi g ua and P. nodosa (Kott 1990) , or P. atlantica (Sanamyan et al. 2009) are all clearly different in colony and zooid size and shape, as well as in internal features. 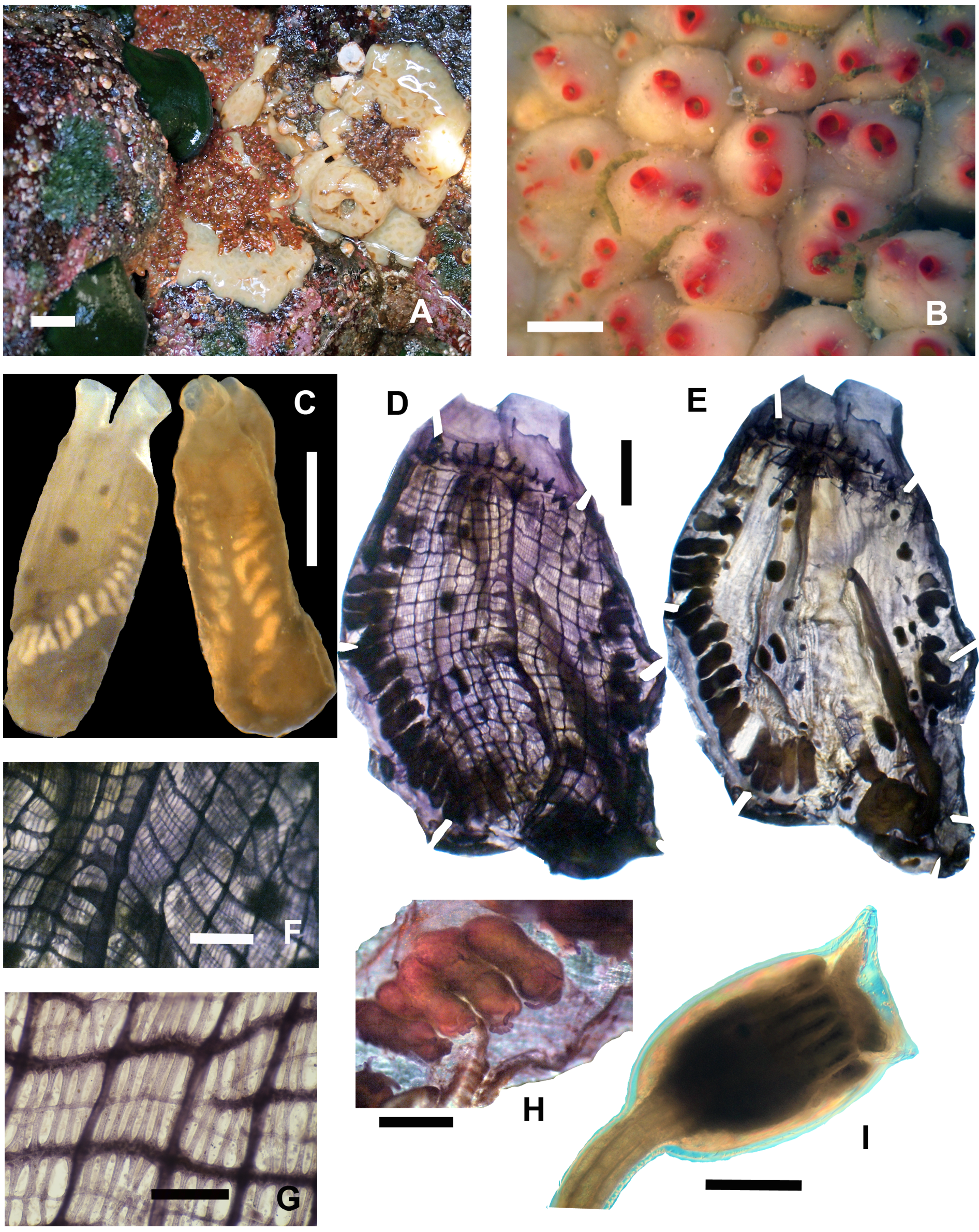 FIGURE 10. Polyzoa iosune. A, image of a colony carpeting the substrate and overgrowing Aplidium peruvianum (whitish masses) exposed at low tide; B, close-up of the apical part of the zooids; C, mantle of two zooids, vision of the right side (left of the image) and ventral vision (right of the image); D, dissected zooid; E, same zooid without branchial sac; F, G, details of the branchial sac; H, close-up of hermaphrodite gonads from the right side of the zooid (endostyle is towards the upper-left of the image); I, larva. Images D – H are of stained material. Scale bars: A, 5 cm, B, C, 5 mm, D, E, 2 mm, F, 1 mm, G, 0.2 mm, H, 1 mm, I, 0.2 mm.