Diagnosis. A medium-sized (46–50 mm SVL) species of Gehyra   ; no webbing of skin between toes III and IV; no skin-fold along posterior of hindlimb; subcaudal scales transversely widened; rostral scale gabled dorsally with a deep medial groove on the dorsal half of the scale; single internarial scale usually present; 2 postnasals of similar size, or with lower postnasal slightly larger; mental scale wedge-shaped posteriorly; 2–3 pairs of postmental scales (chin shields), with inner pair largest and separated from each other by the mental scale along 40% or more of their length; 7–9 supralabials; 7–8 infralabials; snout moderately convex in lateral view; 7–8 undivided subdigital lamellae on the expanded portion of the fourth toe, excluding the apical wedge; subdigital lamellae often with deep medial notch but never fully divided; no granules separating proximal lamellae; adult males with 12–13 pre-cloacal pores arranged in a shallow wedge that points anteriorly; background colouration orange-brown to pinkish-orange; dorsal pattern variable but typically consists of white spots, sometimes arranged in transverse rows, with dark spots that sometimes merge into irregular blotches or dark transverse bands.

Etymology. From the Latin noun electrum   , meaning ‘amber’, in reference to the orange-brown background colouration typical of the species, and alluding to Amber Station, where the earliest confirmed specimen of this species was collected (paratype QM J70090 View Materials ). The name is treated as a noun in apposition.

We recommend the common name ‘Amber rock dtella’ for this species. Recent taxonomic revisions of Gehyra   have moved away from recommending ‘dtella’ in common names, instead favouring ‘Gehyra’ ( Doughty 2018a; Kealley 2018) or simply ‘gecko’ ( Oliver et al. 2016; Doughty 2018b). Kealley et al. (2018) provide justification for this: “We prefer to use ‘Gehyra’ as the common name over ‘dtella’ as the generic name is already available and just as easy or difficult to remember than an additional name fabricated for use as a common name.” The name ‘dtella’, however, is not fabricated but appears to be the indigenous name for Gehyra   from the Chillagoe region of northeastern Queensland ( Broom 1897). This is the same general region that G. electrum   sp. nov. is found, and because of this, we prefer to use the name ‘dtella’ for this species.

Head. Moderately depressed (HeadD/HeadL = 0.4) and moderately wide (HeadW/HeadL = 0.9), snout short (SnEye/HeadL = 0.4) and moderately convex when viewed laterally, with a shallow depression between the convexly curved canthal ridges; eyes large (OrbL/HeadL = 0.2–0.3); neck wide, being only slightly narrower than head or wider in females with enlarged endolymphatic sacs; head covered in small granular scales that are largest on the dorsal and lateral surfaces of the snout; interorbital counts 30–33 (31.2); rostral scale approximately twice as wide as deep, gabled dorsally, and deeply grooved medially on the dorsal half; nostrils rounded and contacted by rostral, supranasal, two postnasals, and first supralabial; postnasals similarly sized, or lower postnasal slightly larger than upper; supranasals usually separated medially by a single small internarial scale along the dorsal edge of rostral (4 of 5 specimens; QM J96404 View Materials without internarial); supralabials 7–9 (8.2); infralabials 7–8 (7.6); mental scale protrudes in a wedge-shape posteriorly, separating the inner-postmentals from each other along 40–50% of their length; 2–3 pairs of enlarged postmentals, with inner pair largest; inner-postmentals in contact with mental and first infralabials, sometimes narrowly contacting the second infralabials on one side; second pair of postmentals usually in contact with first and second infralabials, or sometimes excluded from first supralabial on one side; third pair of postmentals, when present, do not contact infralabials; ear opening moderately large and rounded or vertically elongate. Scales on gular region small, flat, and slightly overlapping, gradually increasing in size and becoming more granular near the postmentals, infralabials, and parinfralabials.

Body. Moderately robust (TrunkL/SVL = 0.5) and dorsoventrally flattened; dorsum covered in non-overlapping granular scales; scales on ventral surfaces flat, often overlapping, and approximately 2–6 times larger than those on dorsum; 2–3 enlarged cloacal spurs behind the lower posterior margin of the thigh in both sexes, but more welldefined in males; 12–13 (12.3) pre-cloacal pores in males that form a shallow chevron anterior to the cloaca, with central pores anteriormost; pre-cloacal pores absent in females.

Colouration in spirit. Colour pattern in preservative is largely similar to the description in life except that the orange and/or pinkish background colouration is faded to shades of cream and brown (except paratype QM J70090 View Materials , which is a rich rusty orange), making the whitish spots and darker blotches indistinct and appear almost entirely absent in paler individuals.

Habitat and ecology. Gehyra electrum   sp. nov. is associated with large granite boulders in savannah woodland ( Fig. 9 View FIGURE 9 ). Most individuals have been found at night on vertical rock faces and overhangs, and occasionally on adjacent vegetation where they have been observed feeding on tree sap (J.M. Wright pers. obs.; Fig. 10 View FIGURE 10 ). This species appears to prefer larger granite outcrops, where it can be found alongside G. dubia   ; although the latter is much more common on trees at sites where G. electrum   sp. nov. occurs. The sympatric G. einasleighensis   is more commonly found on smaller rocks and rubble—similar to other small, spotted members of the genus—and is rarely found on large vertical rock faces ( Bourke et al. 2017; S.M. Zozaya pers. obs.).

Conservation status. With an extent of occurrence (the minimum convex polygon that encompasses all known occurrence points) of 976 km 2 and an area of occupancy (the total area of 4-km 2 grid cells the species is known from) of 20 km 2, Gehyra electrum   sp. nov. appears to have the smallest known distribution of any eastern Australian Gehyra   ; however, the species is extremely abundant where it occurs and suitable habitat at and between the known localities is extensive. While the species is not currently known from any national parks, the site at Talaroo Station is within the Talaroo Nature Refuge, which is managed for conservation by the Ewamian Aboriginal Corporation. While having a small geographic range or small population size is grounds for listing under IUCN Red List Criteria B–D ( IUCN 2012), there is no evidence of plausible threat or decline. Populations of G. electrum   sp. nov. are therefore likely to be secure and we recommend that the species be classified as Least Concern. Nevertheless, more searches at new localities will be valuable to better understand the distribution, ecology, and conservation status of this species. FIGURE 1. Ventral photo of the left hind foot of a Gehyra electrum sp. nov. illustrating how subdigital lamellae were counted. Note that this differs from the counts of King (1983), who included the apical wedge, unlike recent Gehyra descriptions. 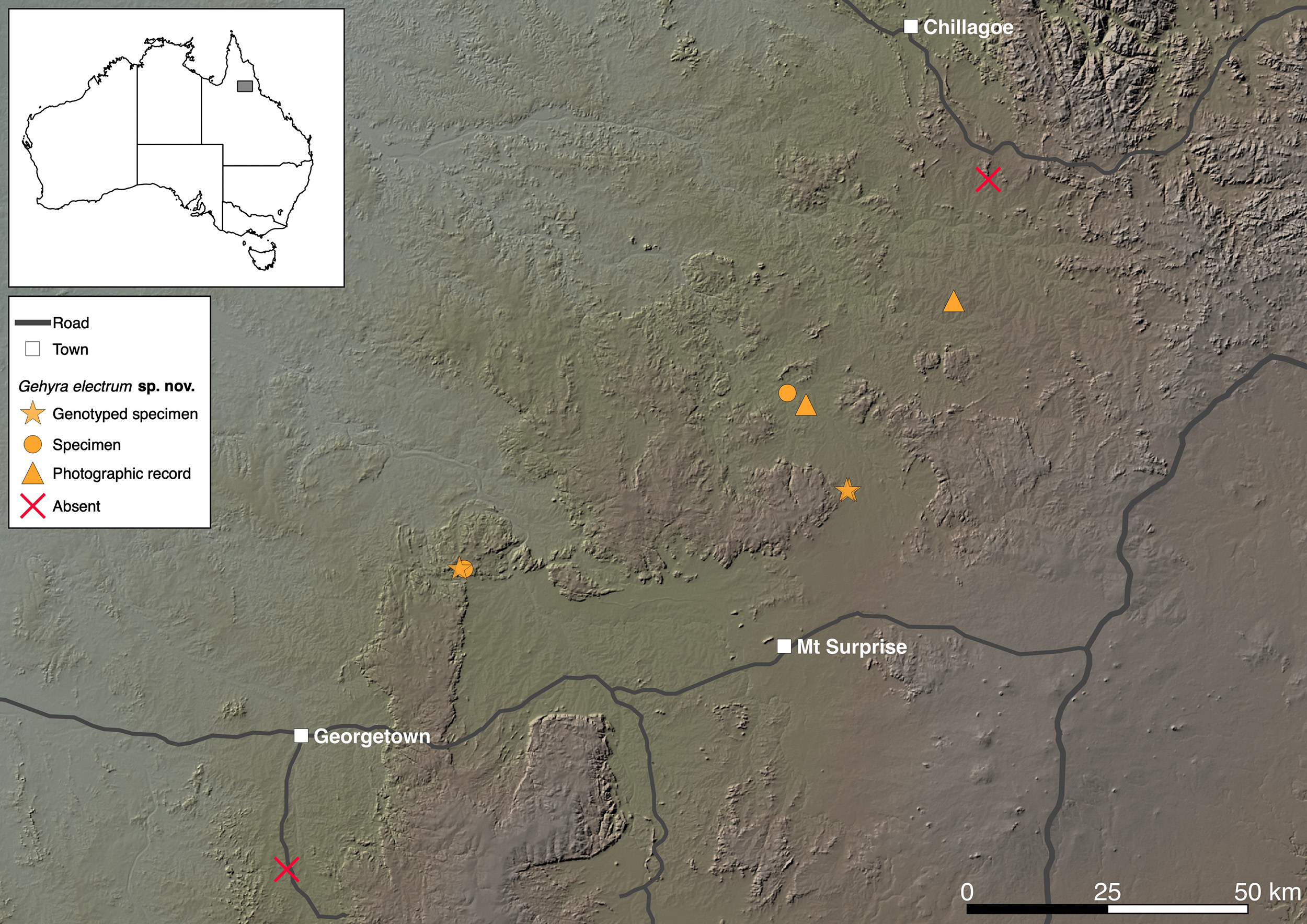 FIGURE 8. Map of inland north-eastern Queensland showing the known localities of Gehyra electrum sp. nov. and sites at which it has not been found despite targeted searches. Also shown are nearby towns (white squares) and major roads. Background colour shows elevation.