Two strains (K2 and K59) collected from Mombasa ( Kenya) in 1979 and identified as D. seguyi by T. Okada were studied in genetic studies ( Ohnishi & Watanabe 1984; Zhang et al. 2003; Li et al. 2012; Chen et al. 2013; M. Watada, pers. comm.). These strains were also sent to the laboratory of Gif-sur-Yvette in France, where Léonidas Tsacas and Marie-Thérèse Chassagnard worked. Tsacas & Chassagnard (1992) considered the strain of D. vulcana of Bock & Wheeler (1972) to be the true D. seguyi . In Tsacas’ notebook recording the strains maintained at Gif-sur-Yvette, we found a note by him considering the K59 strain to be the true D. vulcana . This strain was used in the revision of the genus Drosophila Fallén, 1823 of Da Lage et al. (2007), based on the nuclear gene Amyrel, although in the publication, Mount Selinda, the locality of the strain of D. vulcana of Bock & Wheeler (1972), was mistakenly mentioned as the source of the Amyrel sequence (J.-L. Da Lage, pers. comm.). In spite of the suggestion of Tsacas & Chassagnard (1992), we prefer for taxonomic stability to consider both Kenyan strains to belong to the true D. seguyi and to preserve the concept of D. seguyi of Bock & Wheeler (1972). A strain collected in Cameroon by J. Pool in 2004, and preserved in the Drosophila Species Stock Center, was identified based on the mitochondrial gene cytochrome oxidase subunit 2 (COII) as D. seguyi , indicating the broad distribution of this species in Africa.

David et al. (2014) mentioned the presence of a strain of D. malagassya on the island of Mayotte (discussed under D. malagassya above). We have used this strain, as D. cf. malagassya , in our combined phylogenetic study of the montium clade and showed its close affinity to the Kenyan strains of D. seguyi ( Yassin et al. 2016) . Detailed morphological comparisons support the conspecificity of the strains from Kenya and Mayotte. Females of the strain of Mayotte exhibit the characteristic Mendelian color dimorphism, with the black morph being dominant ( Yassin et al. 2016). 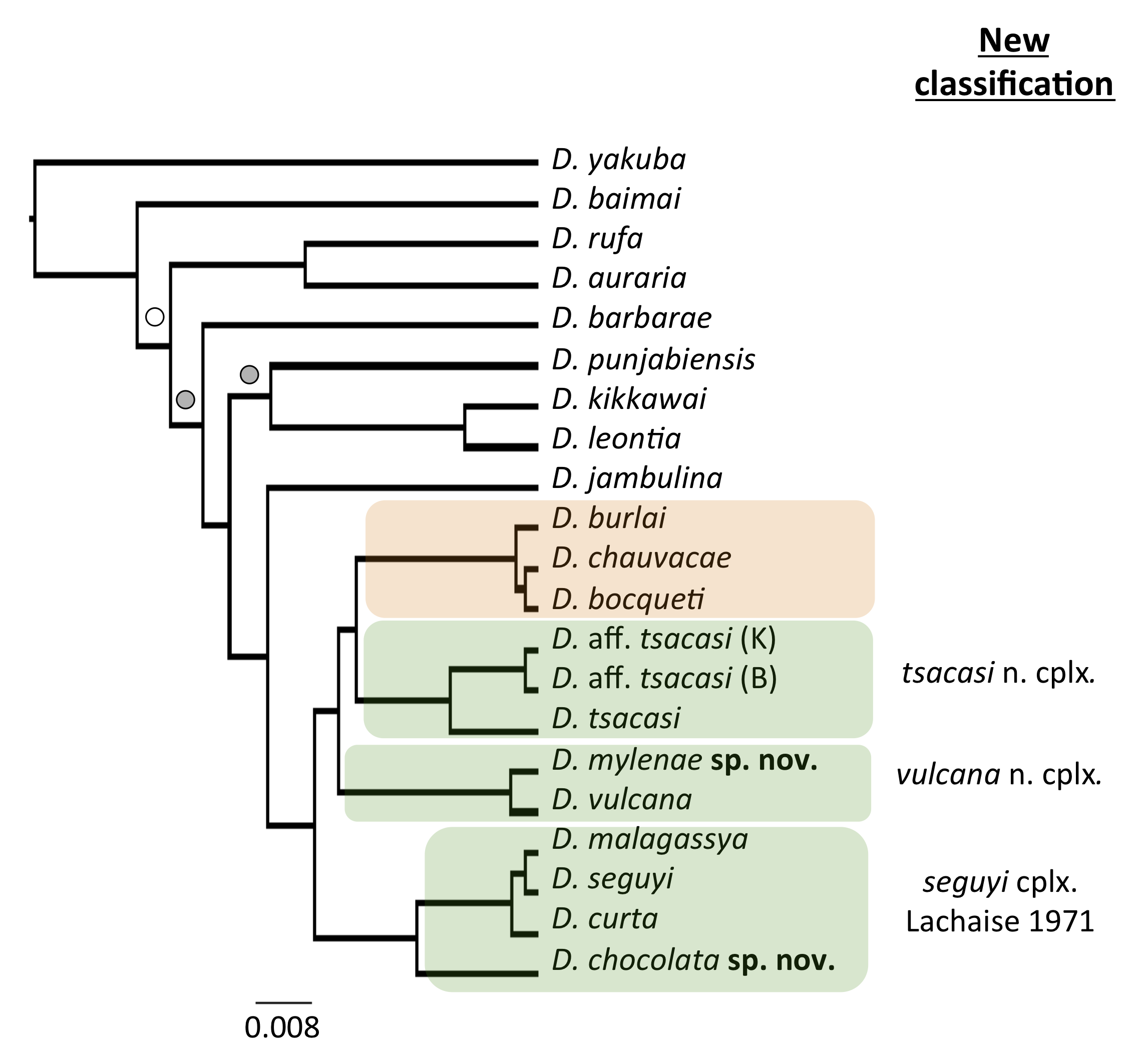 Fig. 1. Bayesian phylogeny of 19 species from the ‘D. montium species group’ Da Lage, 2007 inferred from complete mitochondrial genomes. Nodes supported by 100% posterior probability (pp) are not labeled, those with pp> 90% or 60% are labeled with gray and white circles, respectively. Species belonging to the ‘D. bocqueti species complex’ and the ‘D. bakoue species complex’ are highlighted in orange and green, respectively. ‘K’ and ‘B’ refer to the strains of D. aff tsacasi Bock & Wheeler, 1972 from Kenya and Bioko Island, respectively.