Color in alcohol. Dorsal region of head, from tip of snout to nape, dark brown, ventrally continuing in suborbital and opercular region to horizontal passing through angle of mouth; intermediate region with light blotch. Ventral region

Habitat. The specimens from the ribeirão Pouso Alegre were collected at the mouth of a creek amid the adventitious roots of riparian trees that stand out from the banks. Attempts were made to collect in the region above this point, where the bed was rocky, but no specimen was captured. The ribeirão Pouso Alegre presents riparian vegetation in good condition, bedrock, with sand, clay litter, logs and branches at the mouth ( Fig. 5 View Fig ), dissolved oxygen 7.8 mg /L, pH 7.65, conductivity 85ì S/cm, water temperature 22.5° C, mean depth 6.5± 0.93 cm, mean width 4.1± 0.66 m, mean speed water 0.12± 0.02 m /s. Other nine species of fish were collected in the same location and are listed in Claro-García & Shibatta (2013).

Etymology. The specific epithet maculatus   means spotted, an adjective from the Latin macula, in reference to the dark brown spots on the trunk.

Multivariate morphometrics analysis. The first principal component retained 76.5% of the variance of morphometric

variables, and all eigenvalues showed positive signs, which allows to interpret it as the representative of size (larger specimens to the right of graph). The second component retained 7.8% of the variance and on this axis there was discrimination between species ( Fig. 6 View Fig ). Microglanis maculatus   differed from M. robustus   in this analysis by higher values of anal-fin base length, interorbital width and eye diameter (positive highest values), and smaller values of pectoral fin spine length, dorsal fin spine length and adipose fin base length (negative highest values; Table 2 View Table 2 ). The discriminatory nature of some characters coincided with its proportions with SL or HL ( Table 1 View Table 1 ).

Discussion. The color pattern of M. maculatus   was the first character to draw attention to a new species, and this study evidenced its uniqueness among congeners. Coloration pattern in Microglanis   is quite variable and complex, resulting in a large number of configurations among the species of the genus. Even so, it is possible to observe in the literature that the color pattern proved to be useful for species identification. For example, among the species of the Araguaia-Tocantins basin, M. robustus   has a dark and thin stripe at the base of the caudal-fin rays, at middle of caudal fin and at middle of dorsal fin (Ruiz & Shibatta, 2010), and M. xylographicus   has dark brown body with light streaks on the flanks (Ruiz & Shibatta, 2011). Microglanis oliveirai   is the only species that does not have a unique distinctive mark (Ruiz & Shibatta, 2011), although this condition helps to distinguish it from the other species of the basin.

The shape of hooks on the anterior margin of the pectoralfin spine have been used as well to distinguish Microglanis   species (e. g., in M. zonatus   all hooks on anterior margin are retrorse; Eigenmann & Allen, 1942). This character however, should be used with caution in M. maculatus   due to ontogenetic variation on the hook morphology. Small specimens of M. maculatus   may present only retrorse hooks while large specimens have antrorse and retrorse hooks. The analysis of hook morphology on the anterior margin of the pectoral spine on large and small specimens of M. maculatus   , evidenced that all hooks are retrorse until the ninth hook (counting from the base of spine), and beyond the ninth hook, antrorse hooks become more numerous. The single hooks, as present in M. maculatus   , is a very common character in Microglanis   , but forked hooks is not related to the ontogenetic development, and it seems to be characteristic of M. robustus   .

Noteworthy is the restricted geographic distribution of M. maculatus   . Some Microglanis   species apparently has a wide geographic distribution (e.g., M. cottoides   in coastal rivers of Southern and South Brazil; Menezes et al., 2007), which may indicate large dispersal ability of these species. However, despite the sampling efforts in different locations of the upper rio Tocantins basin, M. maculatus   was found only in the rio dos Patos basin, in Barro Alto. The species was not found in another 20 sampling points on different streams of the rio dos Patos and rio Maranhão basins (Claro- García & Shibatta, 2013), and neither on the ichthyological survey conducted in the Serra da Mesa ( Bartolette et al., 2012), slightly on North of the type locality. The small number of specimens collected and the apparent restricted distribution of M. maculatus   in the rio dos Patos basin, indicate that this species is rare. 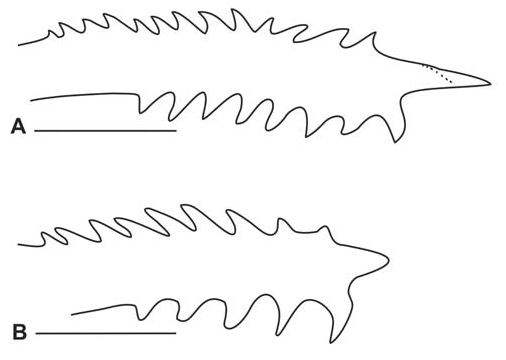 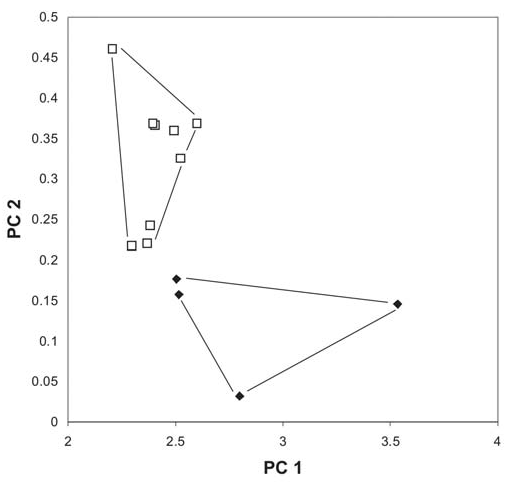