Etymology. The name refers to the host, Hermetia illucens , from which the specimens were reared.

Head ( Figs 11, 12 View FIGURES 9–14. 9 and 10 , 16 View FIGURES 15–19. 15 ) 1.74× as wide as long, 0.93× as wide as high and 1.59× as high as long; eye 1.2× as long as high; temple as long as eye when latter is seen in dorsal view, with slightly convex lateral outline. Genal carina visible from above. Occiput, vertex and dorsal surface of horns densely punctured, the puncturation less coarse on horns. Setae on occiput and vertex lanceolate, adpressed and proclinate; setae on horns thin and about as long as diameter of punctures. Head with two horns mostly tapering near their narrowly rounded apex, their lateral margin being slightly sinuate there; lateral edge of horn separated from inner margin of eye by a row of punctures; width of horn at level of front margin of eye about two thirds the width of frontal depression. Dorsal margin of scrobal depression U-like with its end, in front of ocellar triangle, concave. Frontovertex 2.41× as wide as length of horn when the latter is measured from front margin of eye to apex of horn. Ocelli forming together an obtuse angle. Distance between lateral ocelli 0.94× as long as that of inter-ocellar distance. Posterior outline of head, between ocelli and upper end of genal carina, nearly straight.Anterior margin of horn with a moderately expanded tooth and forming an angle of about 60° with its dorsal margin. Inner margin of horn somewhat convex and visible from side. Sculpture and setation of gena, lateral surface of horn and adscrobal area identical to that of vertex and occiput. Inner margin of eye with a row of punctures. Outer margin of antennal scrobes straight except at level of tooth. Frontal depression reticulate on bottom, squamose reticulate on sides. Mandible with teeth broadly rounded at apex in front view but sharply so in side view. Labrum triangular, bearing a few setae on disc and with a short marginal fringe. Clypeus as a bulging surface somewhat wider than high and with 2 setae on either side. No malar groove or malar carina. Lateral outline of gena somewhat convex. Genal margin forming an acute and sharp angle with lateral edge of oral fossa.

Antenna ( Fig. 17 View FIGURES 15–19. 15 ). Scape linear, progressively tapering from base to apex, about half as long as height of head as defined above. Combined length of pedicel plus flagellum as long as head width. Pedicel, anellus (first flagellomere) and first funicular respectively 1.96×, 1.02× and 1.59× as long as wide; followings funiculars progressively decreasing in length, with 8 th flagellomere [= last funicular segment] 0.73× as long as wide and 1.38× as wide as 2 nd flagellomere. Setation of flagellum short and adpressed, each segment with one row of multiporous plate sensilla (MPS), except F1 having a few MPS at base. Clava ovoid, 1.53× as long as wide, narrowly rounded at apex and bearing a small apical area of micropilosity.

Legs ( Figs 3 View FIGURE 3 , 29 View FIGURES 29–32. 29 and 30 ). Procoxa with anterobasal fovea accommodating temple, the fovea carinately margined on outer side. Profemur thickened. Mesofemur strongly inflated apically. Mesotibia compressed laterally. Mesotarsus 0.80× as long as tibia. Metacoxa 1.74× as long as wide, with broad apicodorsal flange having a regularly rounded edge; coxa densely strigose dorsally to apex, sparsely punctured ventrally and densely setose laterally. Metafemur quite broad, only 1.57× as long as wide and with strongly convex dorsal margin at base; short and wide basal tooth visible on ventral margin of metafemur before serrulation; small inner tooth present near base; disc of femur with moderately dense punctulation, the interspaces between points about twice as wide as their diameter; setae thin and adpressed, about twice as long as interspaces between points.

Wings ( Figs 25, 26 View FIGURES 20–28. 20 and 21 ). Fore wing 2.81× as long as wide; marginal vein 0.74× as long as costal cell. Basal and cubital folds as well as basal cell bare; Rs fold with 2–3 rows of setae. Costal cell with a row of setae on underside, with a few additional setae near apex. Marginal cell with 12 irregularly distributed setae on upper side. Median fold and underside of wing membrane from level of base of marginal vein with microtrichiae on underside, the membrane with hair-like setae on upper side. Apex of submarginal vein with 3 sensilla placodea, stigmal vein with 4 aligned sensilla.

Metasoma ( Figs 27, 28 View FIGURES 20–28. 20 and 21 , 30 View FIGURES 29–32. 29 and 30 ). Petiole bare, with dorsal surface transverse, 2.3× as wide as long, with sublateral ridges converging backwards; foveae smooth; petiole with a sharp, hook-like basiventral tooth. Gaster 1.91× as long as wide, 1 st gastral tergite large, 0.71× as long as gaster, longitudinally strigose on basal third, the strigose surface about as long as wide with slightly convex posterior limit, and including nine primary ridges (joining the basal transverse carina), lacking secondary crests; outer ridges straight, similar to the other ones; tergite punctulate and with short setae on sides near apex. Following tergites much shorter with progressively more concave posterior margins; each tergite bearing a row of setae and a transverse strip of punctulation. Hypopygium reaching apex of gaster, with 2 submedian rows of setae, the apical row hardly longer than the basal.

Male 4.2 mm. In most respect similar to the female but with horns and flagellum longer and pedicel shorter than in female; the proportions that differ from female are quoted below.

Variation. The specimens from Ghana have the flagellum, fore and mid legs darker, clearly brown. No other variation was found.

Diagnosis. Both sexes. Head coarsely punctured on frons, vertex, occiput and gena ( Figs 11, 12 View FIGURES 9–14. 9 and 10 ); horn narrow, tapering near apex where its inner edge is sinuous; apex of horn sharp; marginal carina of frontal depression U-like, concave in front of ocellar triangle; outer edge of horn separated from inner eye margin by a row of punctures; inner and outer edges of horn slightly convex when seen in lateral view; temple straight on side. Lanceolate setae golden on vertex, occiput, pronotum and most of mesoscutellum ( Fig. 22 View FIGURES 20–28. 20 and 21 ). Anteromedian areola of propodeum about as long as wide with convex lateral edges. Femoral depression of mesopleuron coarsely sculptured, strongly strigose at mid-height. Fore wing with membrane brownish except at base, on marginal cell and a spot on front margin of wing beyond venation; setae dark; Rs fold setose ( Figs 25, 26 View FIGURES 20–28. 20 and 21 ). Petiole strongly transverse with basoventral tooth sharp, hook-like. Strigose surface of first gastral tergite not half of tergite length ( Fig. 30 View FIGURES 29–32. 29 and 30 ). Male with flagellum filiform ( Fig. 19 View FIGURES 15–19. 15 ).

- from E. ugandensis and E. minimus (and a few other undescribed species) by the partly infuscate fore wing in species of the ehrhorni group versus wing entirely hyaline;

- from E. kivuensis, E. inflexa and E. acuta by the longer temple in species of the ehrhorni group, at least 0.60× as long as the eye [in dorsal view], with its side not or hardly convex versus temples shorter, at most 0.50× as long as the eye, with the side markedly convex;

Within the ehrhorni group, E. galesusaeformis and E. hermetiae have the secondary tooth along the scrobal depression larger and sharper than that of E. ehrhorni , the eye relatively smaller with its margin distant from both the hind and front margin of the head versus secondary tooth small, eye quite large, with its front margin very close to that of the frons in E. ehrhorni .

Detailed comparison with E. galesusaeformis to which E. hermetiae is very close (but see also the ratios given in Table 2 View TABLE 2 ). 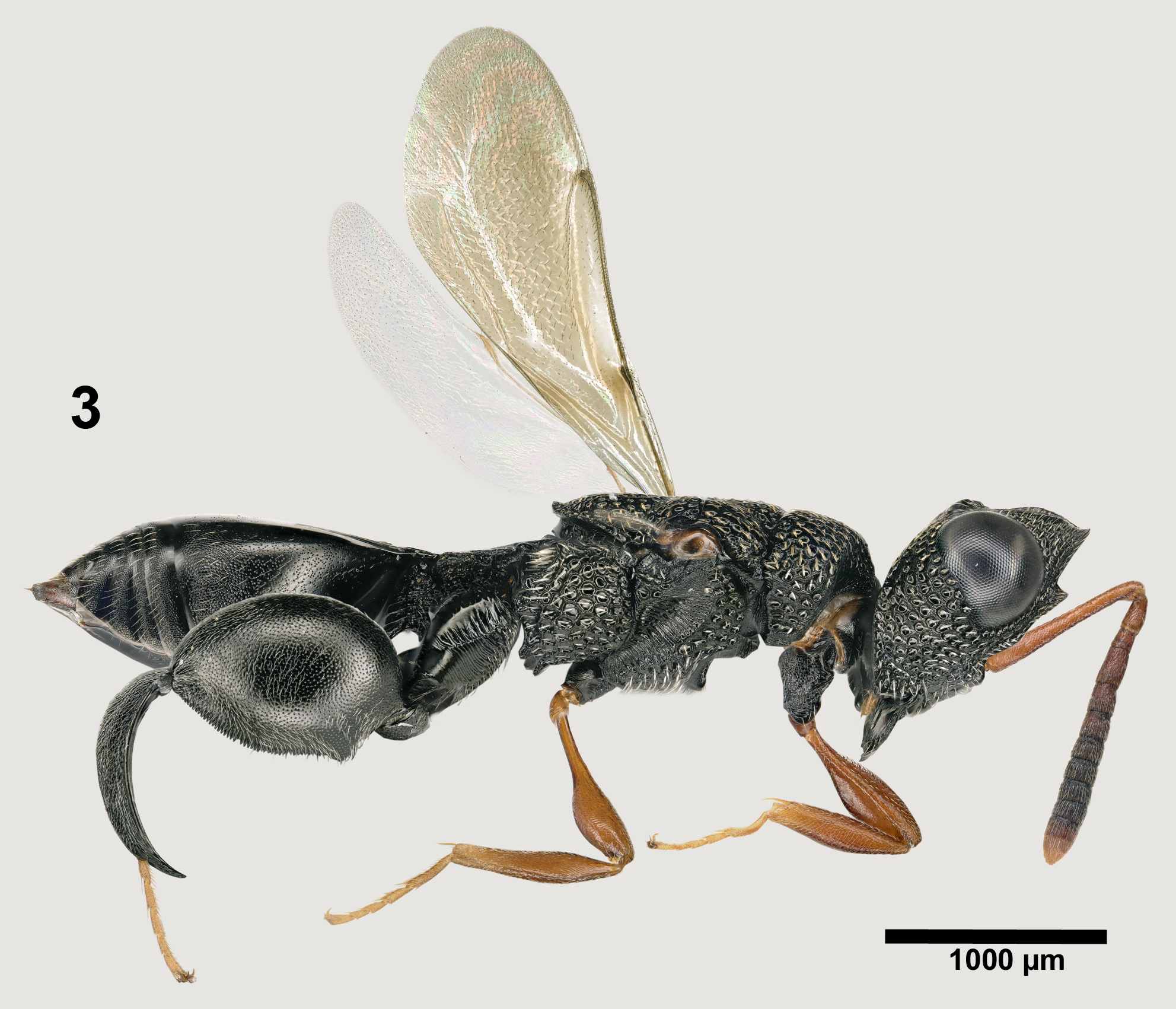 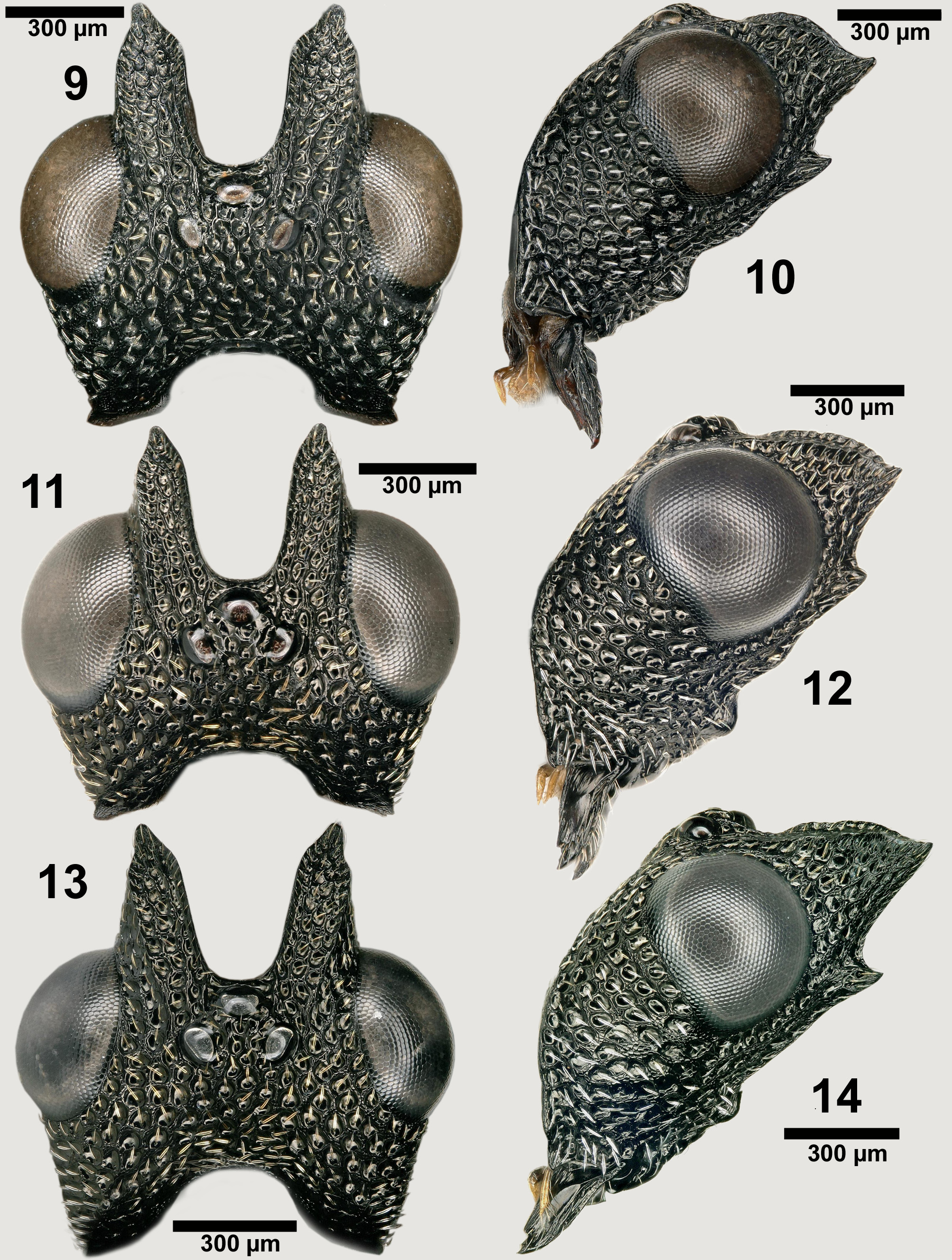 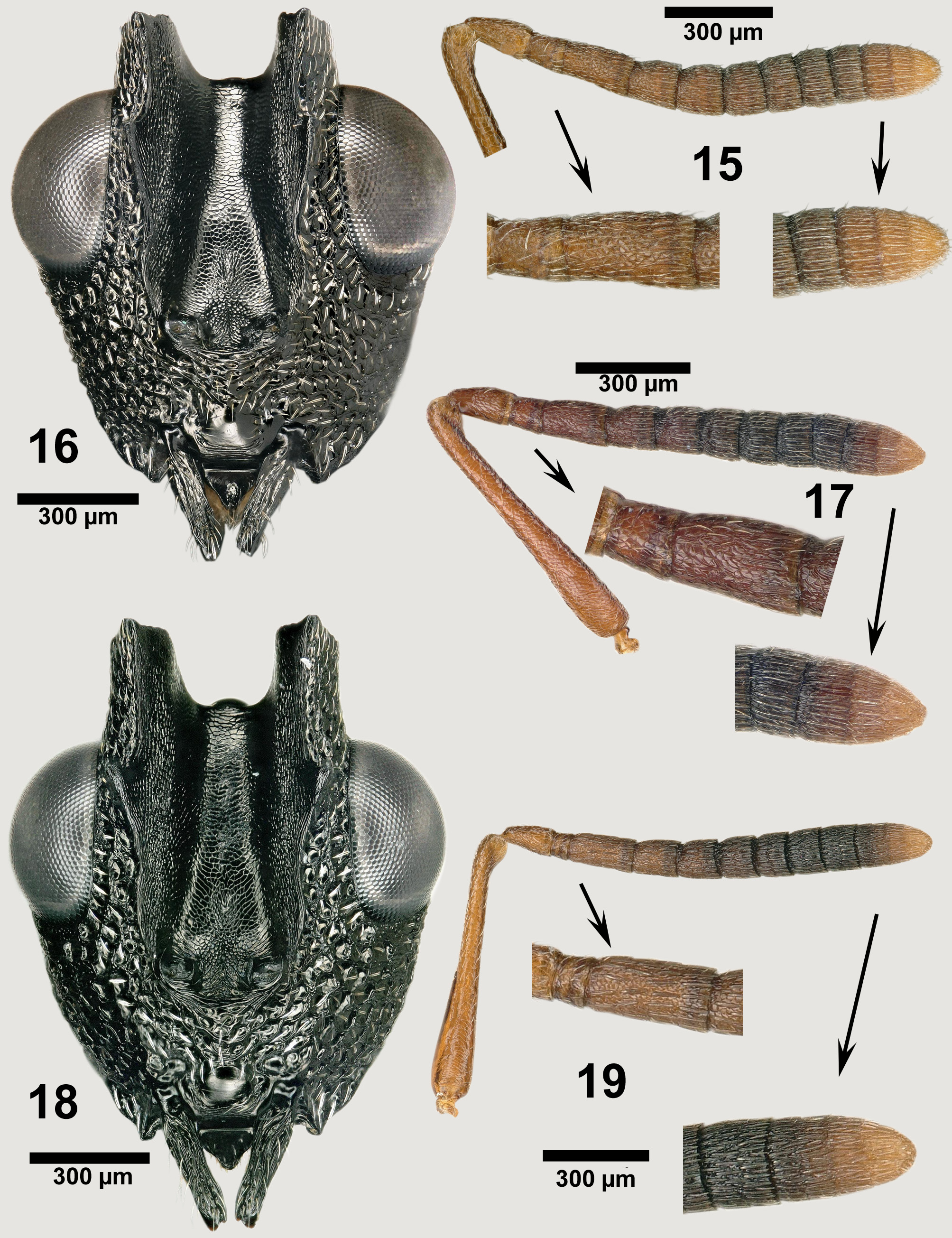 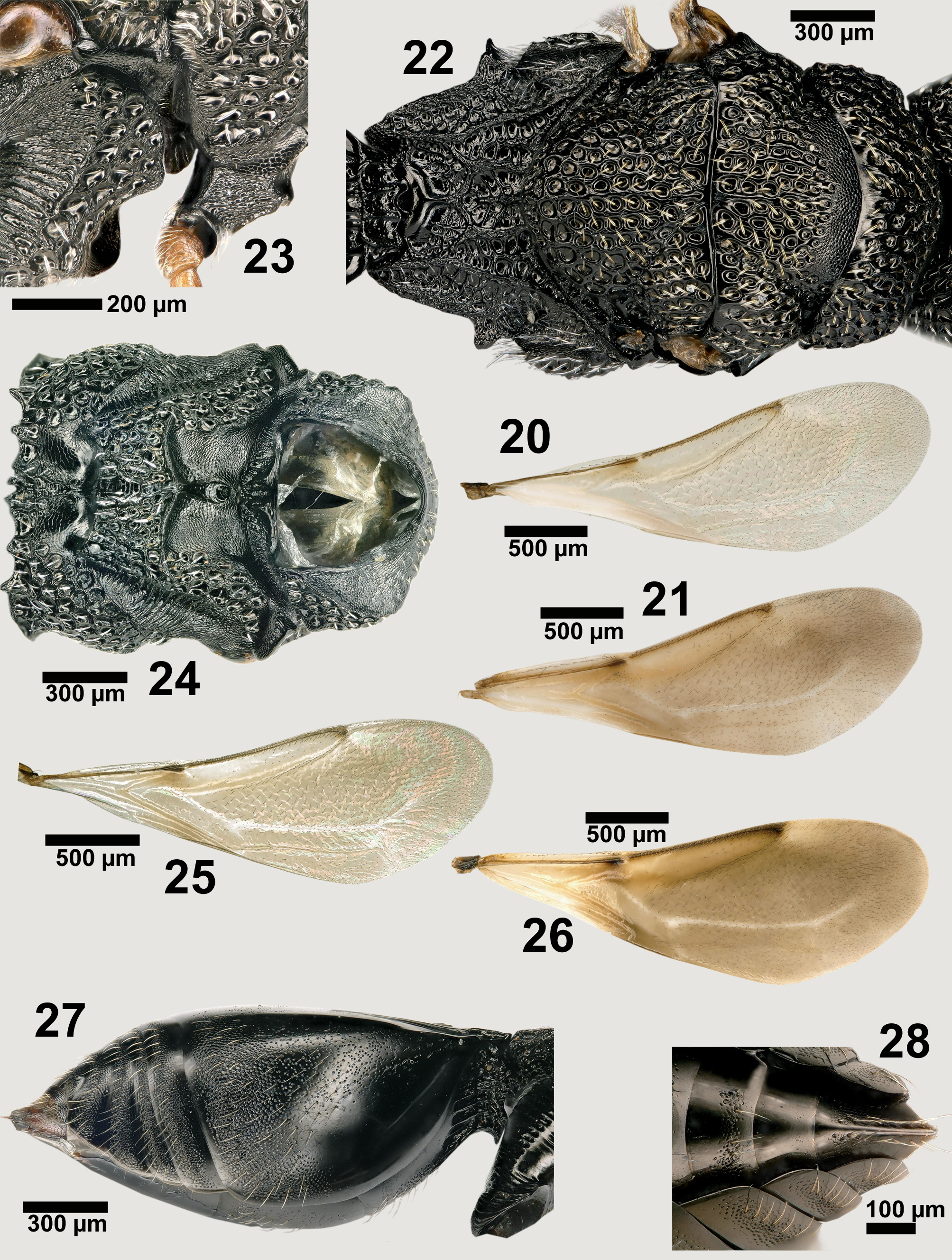 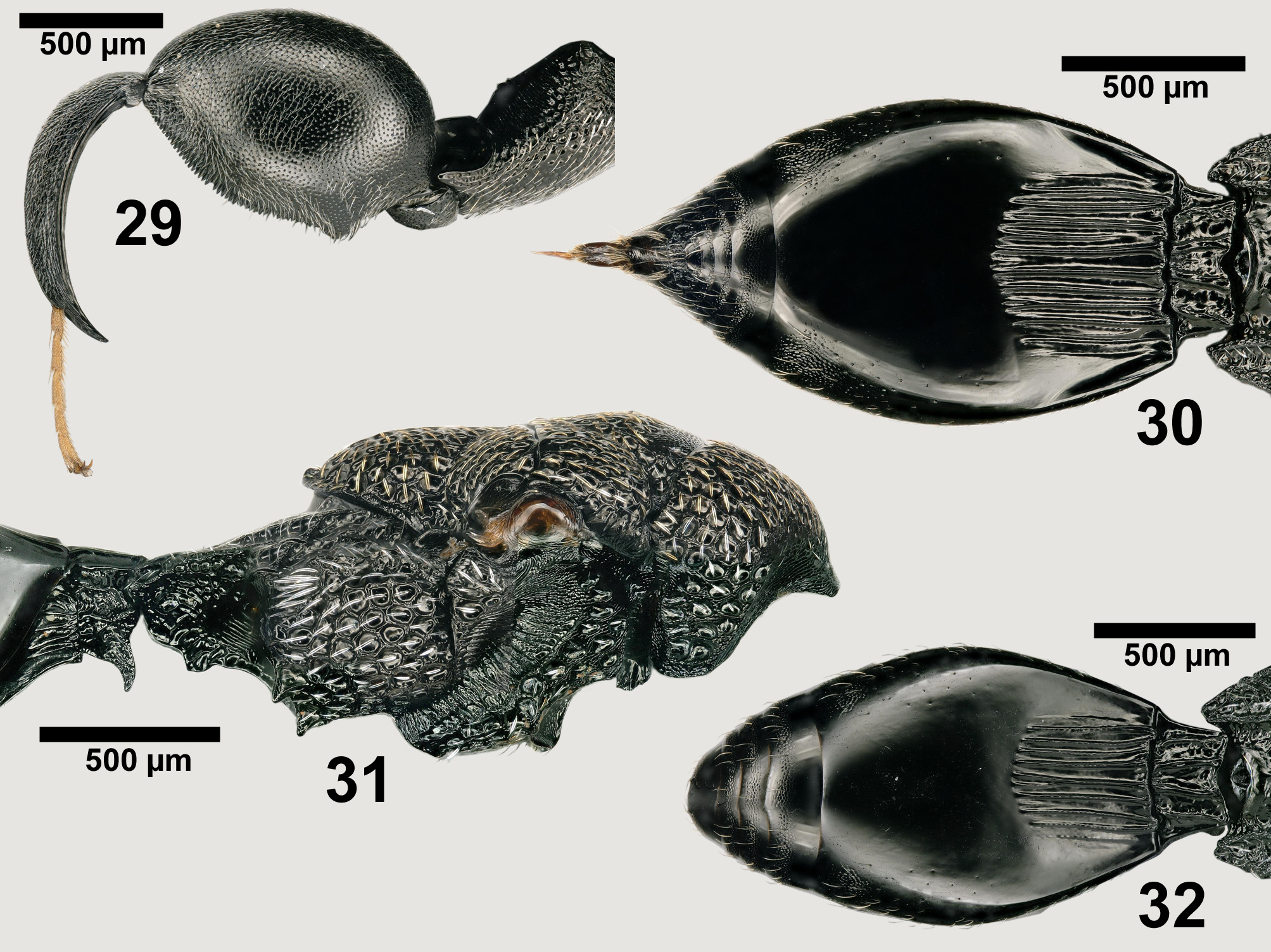