Type material status. The ZSI collection has one glass bottle for this species, labelled as holotype, containing the female specimen in good condition. The same bottle has a small glass vial containing the dissected genitalia.

Justification of the synonymy. Detailed examination of the holotype of N. robusta   revealed that this species has all of the diagnostic features of N. pilipes ( Harvey et al. 2007)   : longer than broad opisthosoma with a broad mid-dorsal longitudinal band, very wide and narrow epigynum with paired lateral indentations and deep depression across posterior margin, short and thick copulatory ducts and wide and flat fertilization ducts (compare Fig. 2 View FIGURE 2 A–C with Harvey et al. 2007: figs 4, 28–29). Although the spermathecal bulb of N. robusta   looks more spherical in shape, it may be attributed to intraspecific variation and would not warrant the recognition of N. robusta   a separate species. The species N. robusta   should thus be considered as a junior synonym of N. pilipes   .

Note. Nephila pilipes   is notable for its colour polymorphism ( Dahl 1912; Tso et al. 2004; Harvey et al. 2007). We also have observed two distinct colour morphs in the Indian population of N. pilipes   : black morph with black opisthosoma and reddish legs and yellow morph (typical morph of N. pilipes   ) with yellow stripes and spots on opisthosoma and greyish-black legs ( Fig. 1 View FIGURE 1 A–B). In some black morphs, the opisthosoma has an inconspicuous mid-dorsal longitudinal greyish-black patch. The males of both black and yellow morphs are identical in somatic colouration (uniform reddish-brown colouration) except the occurrence of longitudinally arranged silver spots on the opisthosoma of the latter ( Fig. 1 View FIGURE 1 C–D). Except for these variations in somatic colouration, in all other respects, including the morphology of genitalia, the black morph is highly similar to yellow morph (compare Fig. 3 View FIGURE 3 A–D with Fig. 3 View FIGURE 3 E–H).

We were unable to locate the type material of N. dirangensis   in the arachnid collection of ZSI, even though the authors claimed that the types were deposited there ( Biswas & Biswas 2006). However, while examining specimens from Uttarakhand deposited in ZSI, we found a few Nephila   specimens that are identified as N. dirangensis   by one of the original authorities of N. dirangensis (Bijan Biswas)   . These specimens in fact belong to Trichonephila clavata (L. Koch, 1878)   , indicating that N. dirangensis   may be a junior synonym of T. clavata   . But confirmation requires examination of type or topotype materials of N. dirangensis   . The ZSI collection has a glass jar containing seven female specimens in separate glass tubes labelled as ‘ N. kuhlii   ’. These specimens in fact represent the black morph of N. pilipes   (compare Fig. 2 View FIGURE 2 E–F with Figs 2 View FIGURE 2 B–C and 3C–D). The species illustrated as ‘ N. kuhlii ’ in Tikader (1982)   also is a black morph in its genitalic details (compare Tikader 1982: figs 200–201 with Fig. 3 View FIGURE 3 C–D). All these indicate that the species identified/described from India as ‘ N. kuhlii   ’ is indeed a black morph of N. pilipes   . Additionally, we also examined the type of Nephila angustata Stoliczka, 1869   (three female specimens; 3552/10) (now a synonym of Leucauge decorata (Blackwall, 1864))   ( Fig. 2 View FIGURE 2 H–I) and all are in a bad condition. 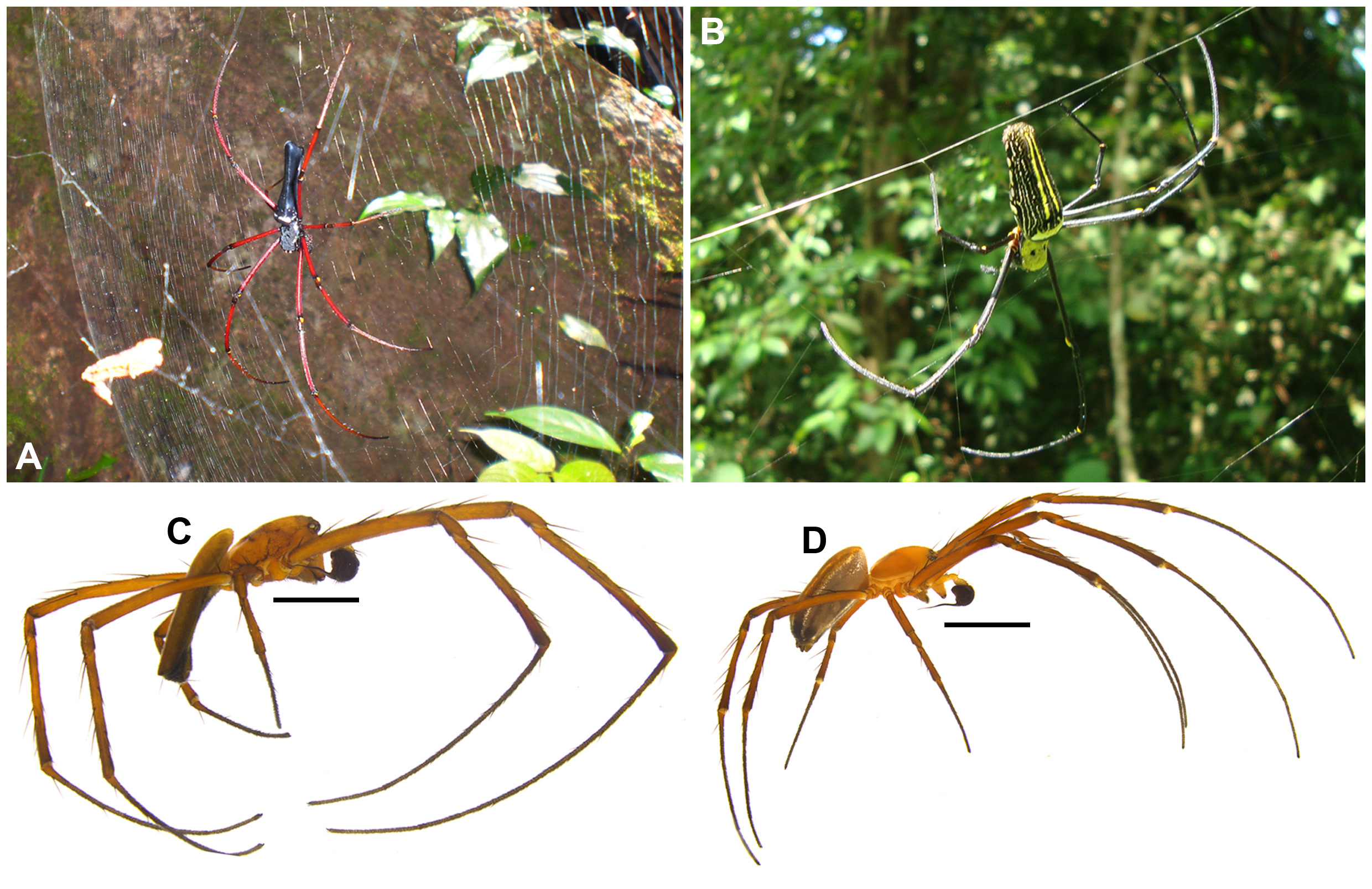 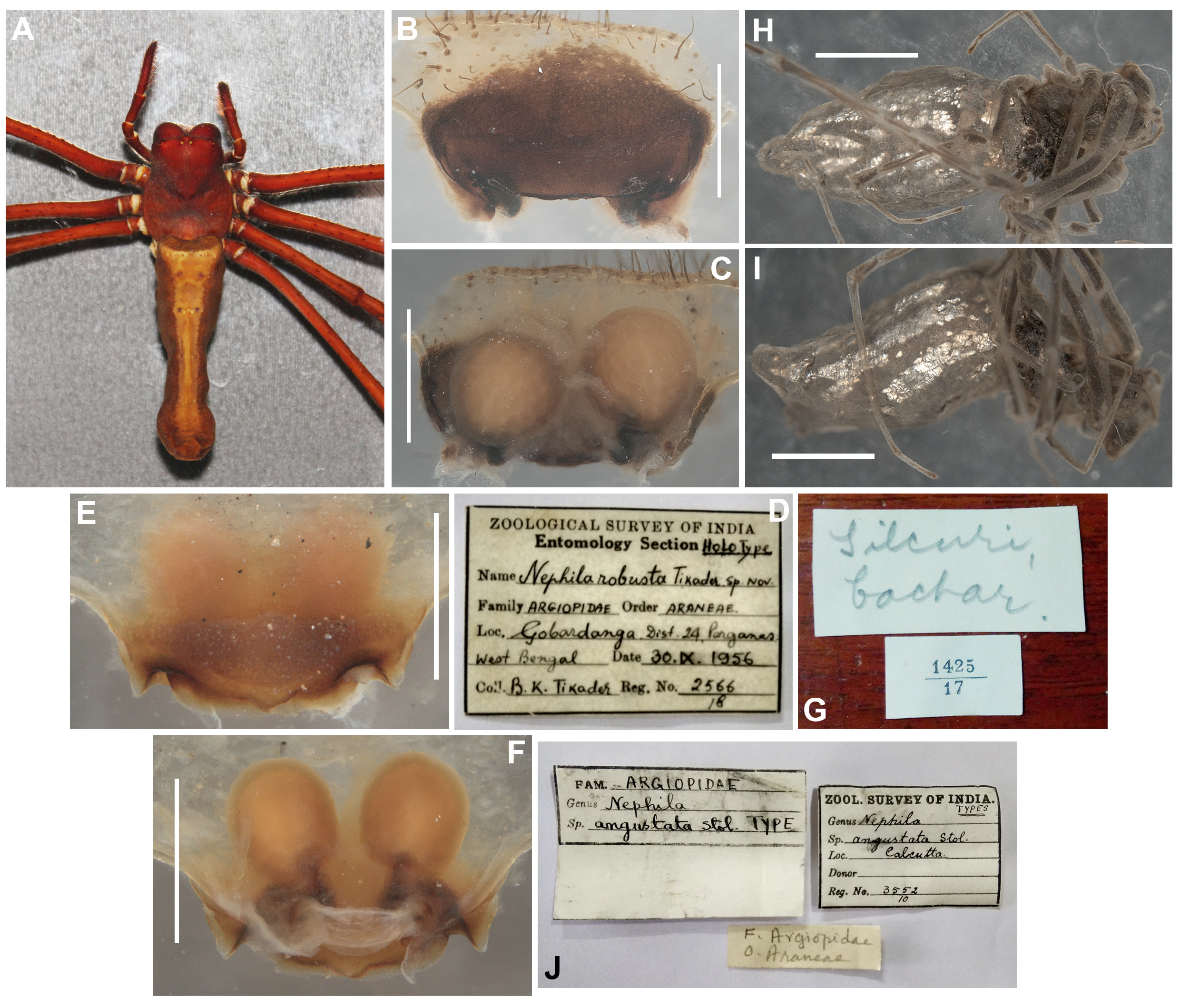 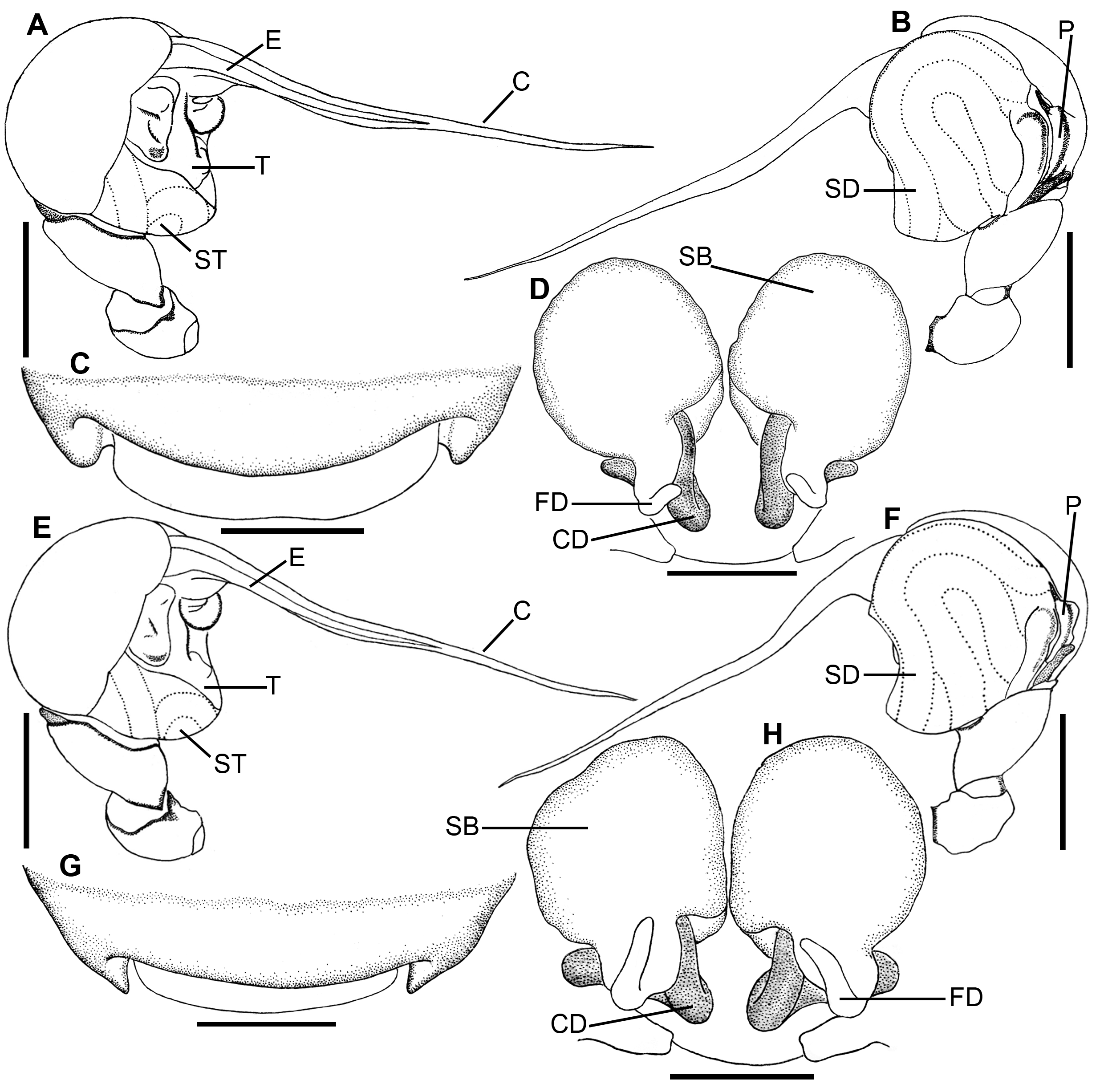