Together with S. lanatus ( Fig. 50 View Figs 49–56. 49 ) and S. erythrinus ( Figs 41–42 View Figs 41–48. 41–42, 45 ), this is one of three species in the argentatus group with uniformly silvery-white clypeal and propodeal setae in both sexes. Interestingly, the setae on the propodeum are very attrite in all studied female specimens, leaving large portions of the propodeal enclosure bare. In contrast, S. lanatus and S. erythrinus have much of the propodeal sculpture obscured by dense appressed setae. Furthermore, there are several distinct transversal ridges on the propodeal dorsum of S. feijeni nom. nov. ( Fig. 43 View Figs 41–48. 41–42, 45 ), a characteristic that is unique among the African members of the argentatus group. What also separates it from the remainder of those species is the fact that in females, approximately the lower two-thirds of the clypeus are brightly ferruginous, whereas the others have it completely black.

The distinguishing characteristics of males ( Fig. 44 View Figs 41–48. 41–42, 45 ) are more subtle. From S. lanatus , they differ in having a notably shorter petiole, the length of which (see Introduction to measurements) reaches no more than 2.5 times its medial width instead of almost 3 times. Sphex feijeni nom. nov. also has a distinct placoid pattern, with placoids that are half as wide as the segments covering flagellomeres III–V. The very similar S. erythrinus has the placoids nearly as wide as the segments and covering flagellomere VI in addition to III–V, while S. lanatus has only a partial, narrow placoid on flagellomere V. Finally, if genitalized, S. feijeni nom. nov. is easily distinguishable through its uniformly hyaline setae laterally on the gonostyles ( Fig. 46 View Figs 41–48. 41–42, 45 ), as both of the other species have the stout lateral setae black or dark brown ( Fig. 45 View Figs 41–48. 41–42, 45 ), with only the thin setae near the apex being silvery.

The species name is dedicated to Dr Hans R. Feijen, who collected the majority of the specimens examined here.

COLOR. Black except for the following, which are ferruginous: basal half of mandible, lower part of clypeus, scape, pedicel, basal half of flagellomere I anteriorly, legs from trochanter onward, terga V–VI and sterna V–VI. Cellular wing area hyaline, forewing with fuscous spot beyond marginal cell.

In the holotype, scutum and scutellum are ferruginous instead of black. 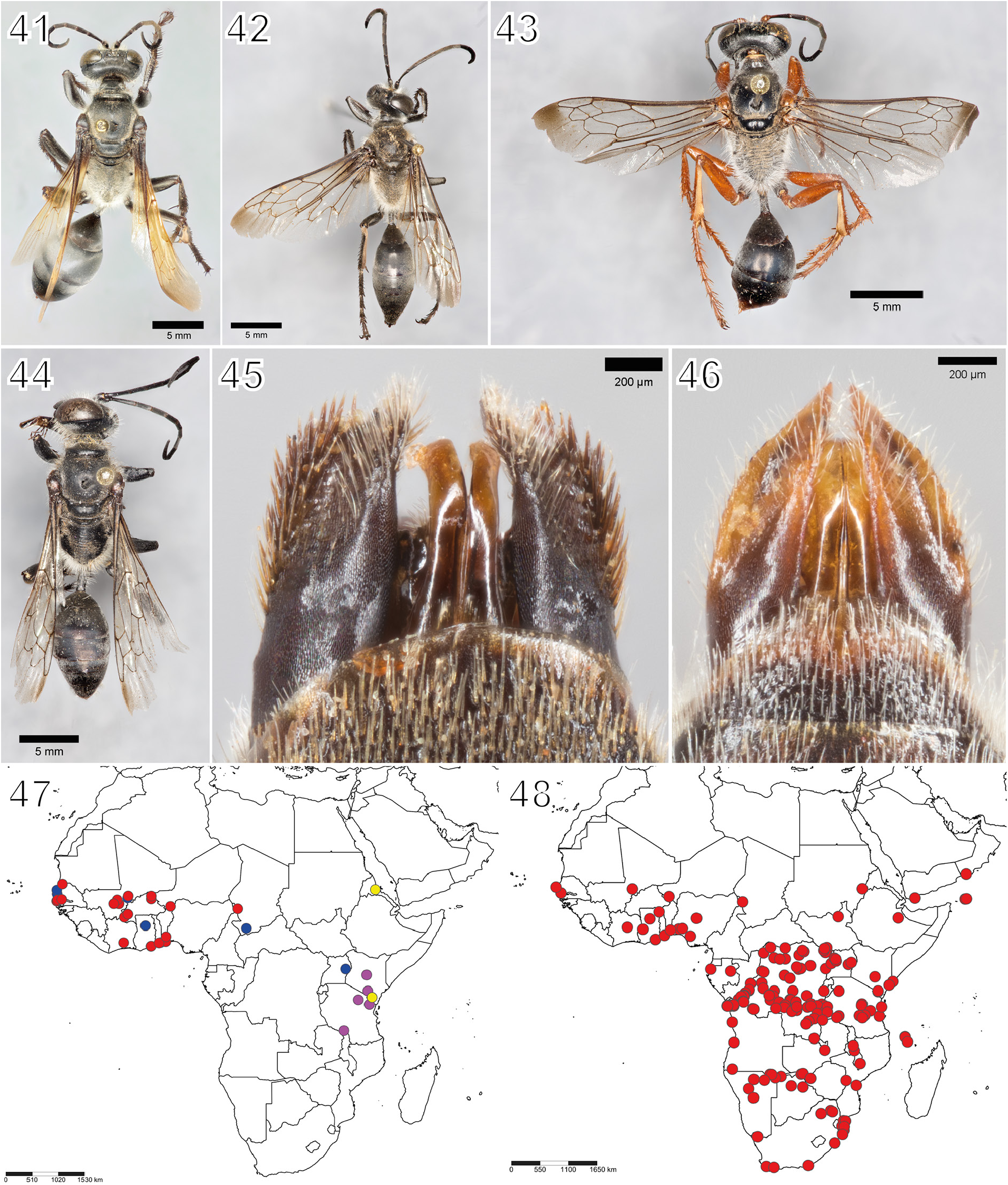