Scutellum with apical fringe of about 12 evenly spaced hairs. Subscutellum grey pollinose but occasionally some weak brown pollinosity can be present centrally or in upper lateral corners. LTC about 1.0– 1.7 times LFC. Trochanter yellowish to brown. Femur with base (rarely) and apex narrowly yellow. Hind femur weakly concave in ventrobasal half. Tibia yellowish, ventrally darkened in apical two thirds. Tarsi yellowish to brown, with distitarsi darkest. Pulvilli of front leg slightly shorter than distitarsi. Tergite 1 anterodorsally brown, otherwise grey pollinose. Dorsally brown pollinosity covering entire tergite 2, anterior three quarters of tergite 3, anterior half to two thirds of tergite 4 and anterior quarter of tergite 5, otherwise shining. Laterally, tergites 2–5 entirely brown pollinose or with distinct triangular patches of greyish-brown to grey pollinosity in posterior half. Membranous area key-hole shaped. Surstyli elongated but can be slightly shorter than figured here ( Figs 38–39 View FIGURES 36 – 42 ). Depending on the perspective, the shape of the surstyli can vary. Only two of the three ejaculatory ducts are distinctly sclerotized in distal half.

Annotations: Becker (1889) collected a single male at Mount Eggischhorn. The specimen’s label states “Furka”, a pass about 30km away according to De Meyer (1996). The female sex cannot be differentiated from P. campestris   at present. The male from Hármaskút in Hungary has a short additional vein M 2 in its left wing.

A comparison of European P. omissinervis   and Nearctic Pipunculus hertzogi ( Rapp, 1943)   showed that male terminalia are conspecific. However, comparison of yet unpublished molecular data for a 658 bp fragment of coxI suggests that both taxa have to be considered as distinct lineages (tested for one Nearctic male P. hertzogi   (Skevington unpublished) and five Palaearctic male P. omissinervis   specimens (Kehlmaier unpublished)). This is especially interesting because P. hertzogi   has lately been thoroughly reanalyzed by Skevington & Marshall (1998) who also established it as a senior synonym of Pipunculus phaeton Coe, 1966   , originally described from 5 ɗ and 6 Ψ collected in the southern part of Great Britain. Because of the present results it is proposed to regard P. hertzogi   as an exclusively Nearctic taxon and transfer P. phaeton   to synonymy with P. omissinervis   instead (syn. nov.). The citings of P. hertzogi   from mainland Italy and eastern Russia (both Skevington & Marshall 1998) should be attributed to P. omissinervis   .

The male holotype and additional two male and three female paratypes of P. phaeton   were obtained for study but are not included in the listing above as they were not used for characterising the taxon due to the reasons stated below: Great Britain, Oxford: 1 ɗ (holotype), 27.VI. 1909, Malloch (NHM); Great Britain, Dorset, Hamworthy: 1 ɗ (paratype), 12.VIII. 1894, Yerbury (NHM); Great Britain, Glamorgan, Port Talbot, Margam.: 1 ɗ (paratype), 24.VIII. 1908, Yerbury (NHM); Great Britain, Cheshire, Rostherne: 1 Ψ (paratype), Britton (NHM); Great Britain, Hants., Woolmer Forest: 1 Ψ (paratype), 12.VII. 1903, Yerbury (NHM); Great Britain, Somerset, Sharpham: 1 Ψ (paratype), 22.VIII. 1922, Audcent (NHM). Male and presumably female terminalia are conspecific with P. omissinervis— the male holotype was dissected—but certain outer morphological features concerning pollinosity stand in contrast: e.g. male with abdominal tergites 2–5 almost entirely shining, some weak brown pollinosity may be present laterally or dorsally along anterior margin, or female with frons shining in upper half at least and prescutum and scutum narrowly grey pollinose along anterior margin (up to anterior quarter), laterally almost or right down to wing base and otherwise shining. Despite this, it is proposed not to question the taxonomic status of P. phaeton   at present until fresh material for molecular work can be acquired and additional evidence generated. Also, the specimens recorded in the past (see Falk & Chandler 2005, De Meyer 1989 b and De Meyer & Beuk 2002) should be critically reviewed.

Pipunculus nartshukae Kuznetzov, 1990   was described from a single male collected in Mongolia and deposited at ZISP (not studied). The surstyli figured in Kuznetzov (1990) (his Figs 3–5 View FIGURES 1 – 8 & 20 View FIGURES 15 – 21 ) seem to be identical to P. omissinervis   , as already pointed out by Skevington & Marshall (1998). Kuznetzov (1990) separates P. nartshukae   from P. omissinervis   through more strongly bent surstyli in lateral view and by less narrowing (presumably front) coxae in their apical half—in P. omissinervis   the apex of the front coxa has approximately half its maximum width, what seems to be characteristic for all species of Pipunculus   studied. Both characters are considered as intraspecific variation and the names therefore synonymized (syn. nov.). Additionally, one male and one female of P. omissinervis   were cited from Mongolia by Kozánek (1992).

In Europe, P. omissinervis shows a predominantly boreo-alpine distribution—the presence in Spain indicated in De Meyer (1996 & 2005) is questioned here. The taxon should be readily collectable from southern Scandinavia up north and from the mountainous regions of western and central Europe to higher altitudes.

Towards the more continental parts of central and eastern Europe, the taxon can already be found at lower altitudes. The specimens from Great Britain (after Falk & Chandler (2005) collected in the southern half incl. Wales, north to Cheshire and Norfolk), Belgium ( De Meyer 1989 b) and The Netherlands ( De Meyer & Beuk 2002), cited as P. phaeton   in the past, do not fit in this pattern. With the present knowledge, they either represent an isolated population of P. omissinervis   or might eventually be revealed to represent a distinct taxon. 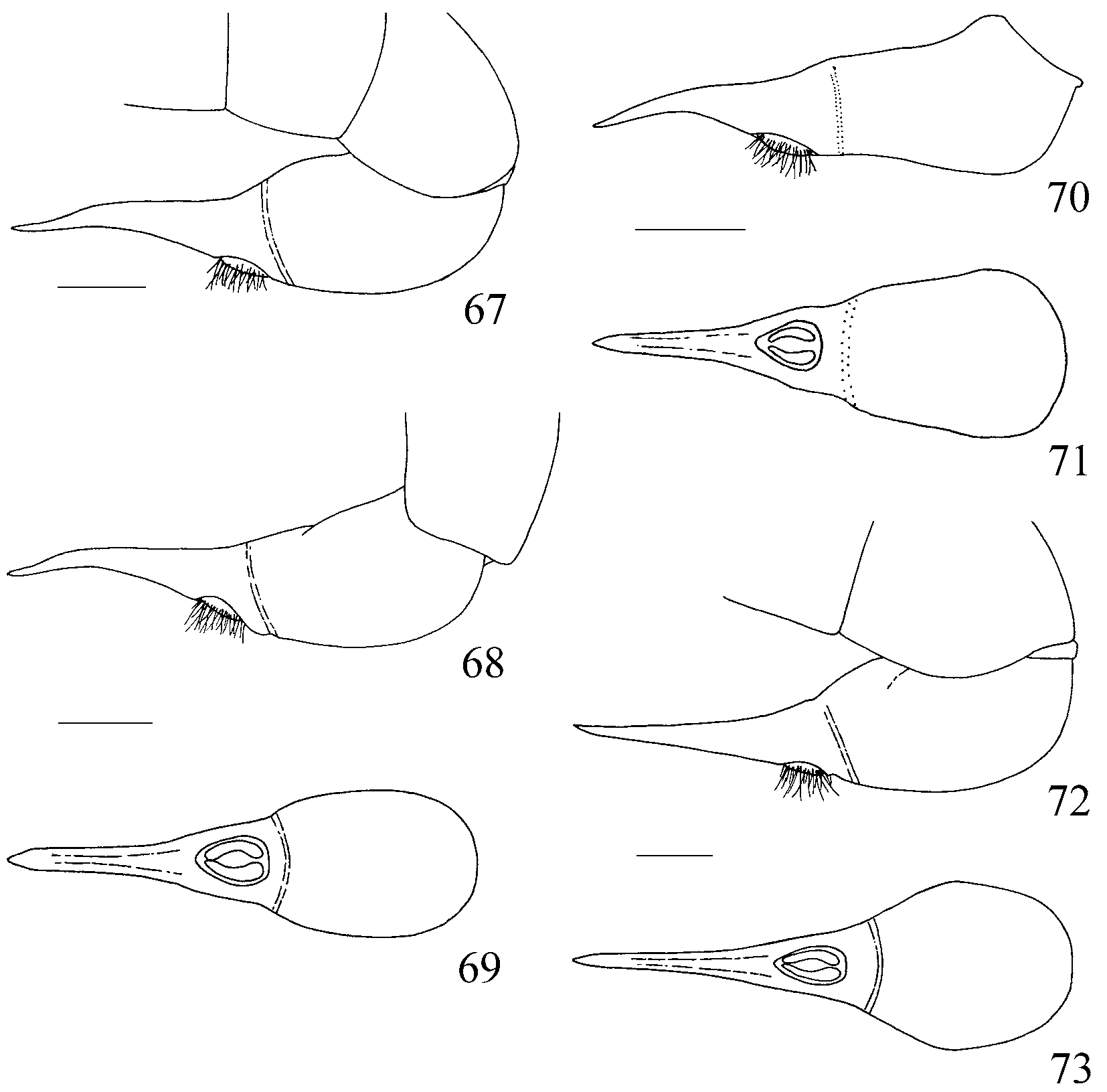