McAlpine, David, 2011, Observations on Antennal Morphology in Diptera, with Particular Reference to the Articular Surfaces between Segments 2 and 3 in the Cyclorrhapha, Records of the Australian Museum 63 (2), pp. 113-166 : 136-137

The distal articular surface of segment 2 is concave within the bounds of the well-developed, uninterrupted rim, but centrally a pedicellar cup is encircled by a sharply elevated ridge or collar. The conus is based within the cup which it almost fills, leaving a narrow encircling furrow. The conus is prominent and produced as a chin below the dorsolaterally facing foramen, and is armed with many denticles or spinules and sometimes with transverse ridges basal to the denticulate zone. The button is dorsolaterally located on the conus just clear of the collar. In Apotropina (subfamily Siphonellopsinae ) and Chloropella (subfamily Chloropinae ) the collar is not very prominent and the general covering of simple, separate microtrichia on the collar extends near the edge of the furrow. In Rhodesiella , Cadrema , and Tricimba (subfamily Oscinellinae ) the collar is markedly higher and more prominent with smooth surface.

The condition in Apotropina and Chloropella , where the collar is relatively little raised and largely clothed with microtrichia, like those on the adjacent articular surface, somewhat resembles that of the possible outgroup Canacidae s.l. (sensu D. McAlpine, 2007a) and is probably plesiomorphic within the Chloropidae . The relatively high, glabrous collar, seen in Rhodesiella , Cadrema , and Tricimba , is perhaps an apomorphic state, but is not present in Lipara and Batrachomyia , also of the subfamily Oscinellinae .

I have seen evidence suggesting that the lining of the furrow is flexible, and that the collar system effectively provides another joint to the antenna. The illustrated pedicel of Batrachomyia ( Figs 66, 67 View Figures 64–67 ), shows how the cuticular fold forming the collar on the medial side of the conus can be stretched when the conus is flexed laterally, and the furrow is no longer apparent.

In view of the fact that the chloropid genera studied represent a wide range of relationships within the family, including examples of all three recognized subfamilies, it is probable that they are adequate to show both the groundplan conditions of the conus for the Chloropidae and the generally diagnostic features. I therefore suggest that the presence of a collar enclosing a narrow encircling furrow around the base of the conus is an autapomorphy for the family, and is a condition unknown in presumably closely related families (e.g., Milichiidae , Canacidae ), but a similar condition occurs in some Pyrgotidae and some other Tephritoidea through convergence (see below). 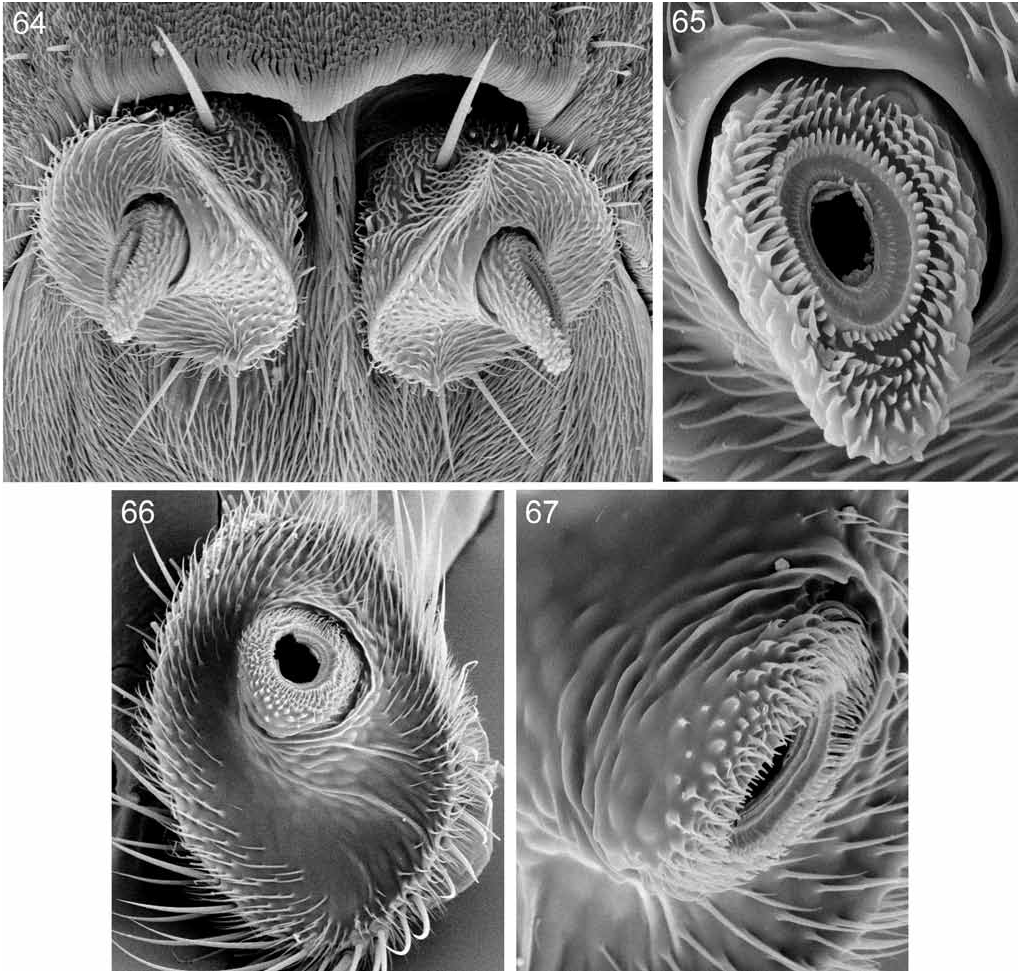