Differential diagnosis. The new species bears similarity only to Thinobius korbeli Löbl & Rychlík, 1994   from Slovakia and Hungary ( LÖBL & RYCHLÍK 1994, MAKRANCZY 2008) and T. kuroshio ( Sawada, 1971)   from Japan ( GUSAROV & MAKRANCZY 2004) in the absence of eyes and functional wings. The male genitalia of T. crypticola   sp. nov. are similar to those of many other Thinobius species.   Thinobius kuroshio   has much longer antennae with more elongate antennomeres, while T. korbeli   also has less transverse mid-antennal segments. In the new species these are conspicuously transverse (approximately twice as broad as long) and maxillary palps are remarkably different from both other blind species: the normally acicular last palpomere is swollen and curved in the middle and the penultimate palpomere is more slender. The two species of the Northern Hemisphere seem to be united by a more swollen penultimate palpomere and an acicular last segment.

Etymology. The species epithet refers to its hidden way of life, the Latin word ‘ crypticola   ’ is a noun in apposition.

Distribution and habitat. Only known from South Africa. The type locality is situated in the Ysternek Nature Reserve (currently part of the Knysna Section of Garden Route National Park) at an elevation of about 650 m a.s.l. It is an Afromontane indigenous forest with abundant fern trees. All the other collecting sites are within a 6 km sided triangle, in a rather similar Afromontane forest (with less frequent fern trees); the FMNH localities, in the sequence listed, are roughly from wetter to drier sites with elevations 420–650 m a.s.l. The highest abundance of T. crypticola   sp. nov. in sifted material was about two specimens per kg in Dal van Varings Trail (2014, Janák lgt.) and Kom Se Pad, 1.7 km W Hwy R339 (2014, Janák lgt.). As far as habitats are concerned, T. korbeli   is more similar to the new species described here, as it was collected 10–40 cm deep in soil in riverine forests.

Larva. In one of the three FMNH samples (collected in 2004) one oxyteline larva was found that almost certainly is conspecific with T. crypticola   sp. nov. This larva was identified by A. Newton as Oxytelinae   based on agreement with published characterizations of larvae of this subfamily by KASULE (1968) and NEWTON (1982) and general knowledge of larval characteristics of this group, including the presence of two subapical teeth on each mandible giving a ‘trifid’ appearance, a penultimate maxillary palp segment that is shorter than the preceding and ultimate segments, a long looped gut with visible but unidentifiable organic matter, and short pigmented urogomphi that appear one-segmented. It was further attributed to this Thinobius   by association with adults in the same microhabitat, the absence of stemmata (unusual in oxyteline larvae, and in agreement with the lack of eyes in adults), and agreement with the only described larva of Thinobius   , T. frizzelli Hatch, 1957   (a partial description by KINCAID 1961). In addition, there were no other Oxytelinae   in these samples.

The total length (including urogomphi) is 1.25 mm. The rather slender shaped specimen has the head and urogomphi more sclerotized than the rest of the body, the thoracic segments and the middle part appear soft and at least partly dissolved. A possible explanation is that the cuticle of this delicate specimen does not withstand extended storage in ethanol. The same observation was made by the second author with a larva of T. korbeli   . This state of preservation ( Fig. 2 View Figs 1–2 ) does not allow a proper description. 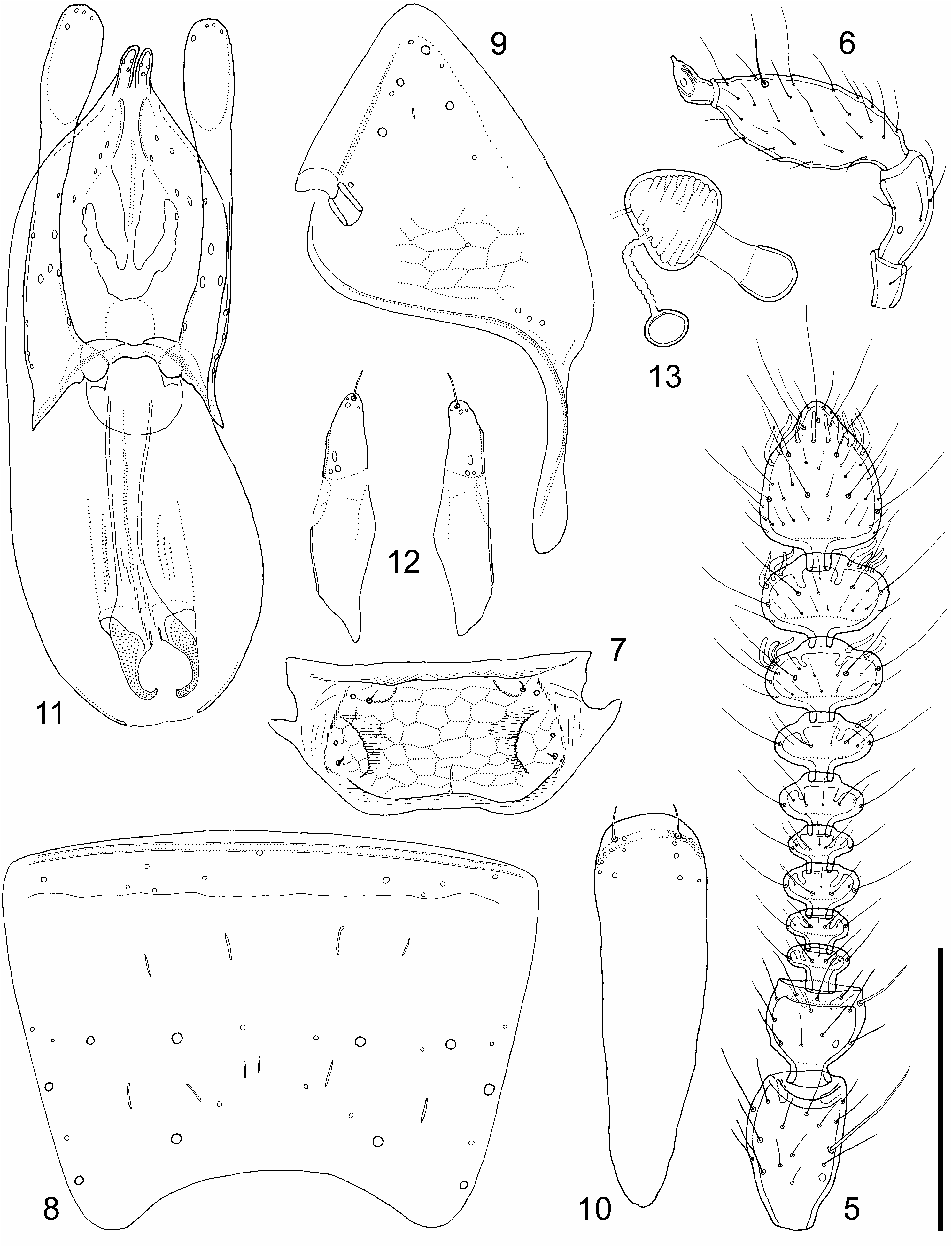