Type specimen. Male holotype ( MCZ) collected by R. Thaxter in July of an unknown year prior to 1918, at Burbank, Carter Co., Tennessee, in the Cherokee National Forest.

Remarks. Hoffman (1964) observed that N. minor   had never been illustrated, which constituted an obstacle to advancing knowledge of the genus and tribe. He thus presented three somatic and an in situ gonopod drawings of an ostensibly conspecific male taken 43.2 km (27.0 mi) southwest of Burbank, not the holotype itself. We concur that this male is conspecific but believe that a dissected holotype gonopod should be drawn and provide such in fig. 25. The proximal divergence of the acropodite and prefemoral process, as opposed to their converging or being subparallel, seems significant as divergence of these structures in nannariinines is primarily distal. Furthermore, the short prefemoral branch is rounded and digitiform instead of spur-like and (sub)acuminate, as in Dr. Hoffman’s (1964, fig. 11) in situ drawing. As the holotype is the only type specimen, we cannot determine whether it truly represents the local population or is atypical in these regards. Securing a series of male topotypes, to address this matter and understand the local population, seems a priority for generic and tribal revisions, but fig. 25 depicts attributes of the holotype nearly a century after the genus and species were established ( Chamberlin 1918a). 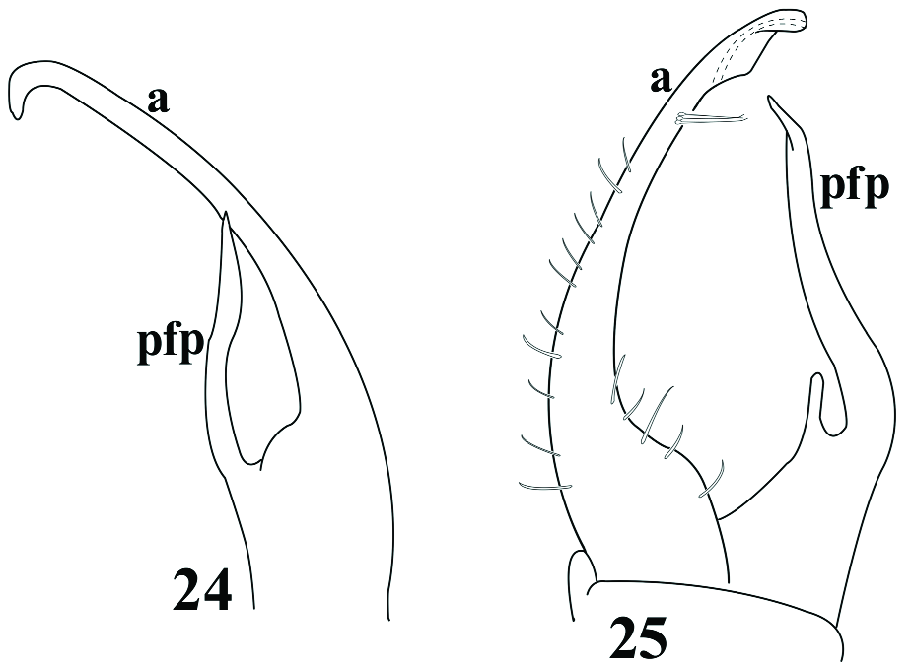