taxonomy of this taxon. Monotypic.

Distribution. Endemic to a small area in N Northern Territory, N Australia, including few sites in Kakadu National Park and its surroundings, as well as a cave in Litchfield National Park. View Figure

Habitat. The Arnhem Leaf-nosed Bat has been reported in sandstone areas, close to streams, riparian forests and secondary forest.

Food and Feeding. Diet of the Amhem Leaf-nosed bat is based on insects, predominantly moths, beetles, leafhoppers, and cockroaches. It is thought to forage close to

cliffs and in many different habitats such as riparian forest, rainforest, eucalypt forest, and open sandy areas.

Breeding. The breeding biology of this species is still unknown. At the moment, only few breeding colonies have been reported, all of them in caves. Amhem Leaf-nosed Bats are estimated to become sexually mature at c.1-2 years; generation length may be c.6 - 7 years.

Movements, Home range and Social organization. In 2014, J. C. Z. Woinarski and colleagues estimated the area of occurrence for the Amhem Leaf-nosed Bat at 2100 km 2, but 10 km 2 when considering only caves and mines. This species is thought to be gregarious, forming groups in different caves.

Status and Conservation. Classified as Vulnerable on 77ze IUCN Red List, due to its restricted range and few known roosting sites. In Australia, the Amhem Leaf-nosed Bat is protected under law. Its total population size is unknown, but probably does not exceed a total of 300 individuals. Some authors claim that this rare species is stable and secure within its home range, whereas others affirm that it is declining, although not strongly. Habitat loss and disturbance of its roosting sites could be threatening its populations. 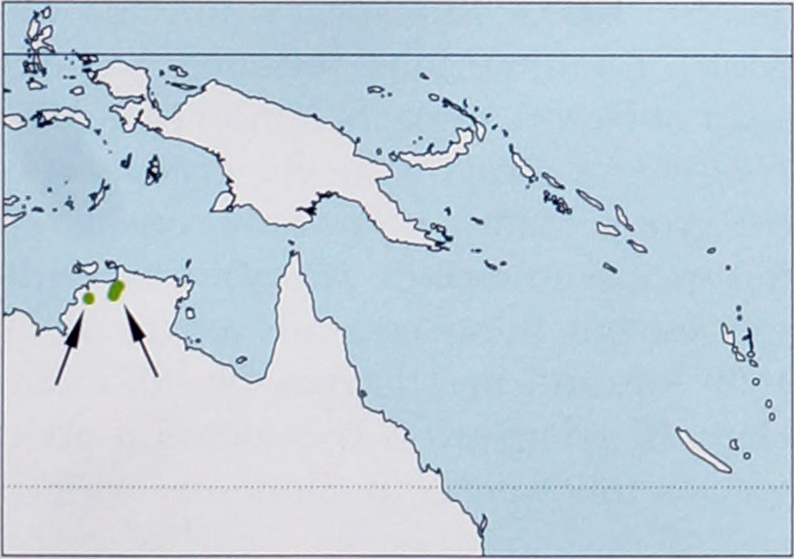 Distribution. Endemic to a small area in N Northern Territory, N Australia , including few sites in Kakadu National Park and its surroundings, as well as a cave in Litchfield National Park.