Diagnosis. Most mature nectophores relatively large and flimsy, with typical heart-shaped appearance. Younger ones with distinct notch on lateral wings. Long ascending and descending mantle canals of approximately equal length. No pigmentation. Bracts in enantiomorphic pairs; broad, leaf-like, tapering toward the proximal end; lower surface flat, upper domed. Indistinct longitudinal ridge from distal, median point to about half the length of the bract. Distal point, in young bracts, bearing nematocysts. Bracteal canal in contact with lower surface of the bract for about one-third its length; distal part, inflected into the mesogloea; relatively long in youngest bracts but gradually shortens to a short process in mature bracts. Tentilla of unique form, with involucrum forming two lateral flaps, and inflated terminal process bearing two asymmetrically placed horns, one terminal the other sub-terminal. At some stage in its development, the cnidoband spirally coiled and containing only one kind of nematocyst, probably mastigophores. Desmonemes (?) present in the terminal process, particularly in the horns. Proximally attached palpons possess a palpacle although often lost before the palpon becomes fully developed in the preserved state.

Material examined. 5 specimens collected by the Johnson-Sea-Link ( JSL) submersibles, all in the vicinity of the Bahamas:

Description. Pneumatophore: The preserved pneumatophores were quite distorted, measuring c. 2.2 mm in length and 1.25 mm in diameter, but otherwise were quite featureless, without any obvious signs of pigmentation.

Nectophore: The preserved nectophores were heart-shaped measuring up to 8.75 mm in length and 9.6 mm in width, without any obvious pigmentation. The largest nectophores were very flimsy and generally distorted in preservation ( Figure 58 View FIGURE 58 ), although those of the holotype specimen were better preserved. In ostial or axial view they were heart-shaped ( Figure 59 View FIGURE 59 ), with a squarish ostium measuring c. 2 mm across. The nectosac, in lateral view ( Figures 60–62 View FIGURE 60 View FIGURE 61 View FIGURE 62 ), was L-shaped, but deeply divided in the mid-line. The ascending and descending mantle canals were of approximately equal length. The pedicular canal passed straight to the nectosac where it gave rise to all four radial canals. The upper and lower canals were straight; the laterals were broadly looped and connected with the ostial ring canal at the upper corners of the squarish ostium, where a distinct tract of ectodermal cells extended obliquely up the sides of the nectophore ( Figure 59 View FIGURE 59 , 61 View FIGURE 61 tec) for a short distance.

One feature of the younger nectophores was that there was a distinct notch in each lateral wing ( Figures 60 View FIGURE 60 C, 61 A n), but the more mature the nectophore the more indistinct this notch became. Another was the presence of two pairs of lateral ridges, although they were often difficult to discern (Figure s 59–61). The upper pair ( Figure 59 View FIGURE 59 A, 61 A ulr) stretched upwards on either side from the upper side of the squarish ostium, approximately half way between the points of insertion of the upper and lateral radial canals, toward the upper end of the nectophore, but petered out approximately on a level with the apex of the nectosac. They were more indistinct than the lower lateral ridges and, because of damage to the ostial region it was uncertain whether they actually connected with the ostium itself. The pair of lower lateral ridges ( Figures 59 View FIGURE 59 A, 61 A llr) was usually more distinct and often was paralleled by a furrow on their upper side, although this might have been a preservation artefact. They arose from the sides of the ostium just below the point of insertion of the lateral radial canals and followed a similar course to the upper lateral ridges.

Siphosome: The siphosomal stem, if present, was always greatly fragmented such that it was not possible to glean any information regarding the organisation of the individual cormidia.

Bract: The bracts ( Figures 62–63 View FIGURE 62 View FIGURE 63 ) were of a single type and occurred in enantiomorphic pairs. They measured up to 6 mm in length and 5.2 mm in greatest width. They were broadest in their distal half, rapidly tapering down to a small, ventral distal point; with a flat lower side and a domed upper one. In the younger bracts this point was occupied by an accumulation of c. 20 nematocysts, measuring 32 x 18 µm. However, in older bracts these nematocysts had usually been abraded. In the preserved specimens there was an indistinct ridge that ran from the distal point of the bract to about half its length. However, in the bracts photographed before preservation ( Figure 63 View FIGURE 63 ) this ridge can clearly been seen. In the youngest bracts ( Figure 62 View FIGURE 62 ) the ridge was quite broad and included two or three rows of distinctive ectodermal cells. The bract tapered down, proximally, more rapidly on the inner side than the outer to form a prominent protuberance at the proximal end. The length of the bracteal canal varied according to the age of the bract, but it was never seen to extend the whole length of the bract. In the youngest ones the canal stretched to about three-quarters the length of the bract, and the part enclosed within the mesogloea was twice as long as the part that ran along the lower surface. The former part was also much broader, and included a broad canal. As the bract developed the internal portion of the canal decreased in length, while the proximal part lying against the lower surface increased. Eventually, in the largest bracts the proximal part of the bracteal canal extended to about one-third their length, and the part inflected into the mesogloea was very short.

Gastrozooid and tentacle: The gastrozooids ( Figure 64 View FIGURE 64 ) typically were very variable in size and shape, particularly with regard to the stomach section. The largest measured up to 9 mm in length and 23 mm in greatest width. There was a prominent, cylindrical basigaster that measured about 2.3 mm in length and slightly less in width, which was separated from the main stomach region by a distinct constriction. There was no obvious distal proboscis region, but the mouth and much of the stomach could open widely, revealing the hepatic stripes ( Figure 64 View FIGURE 64 right).

Tentilla: The tentilla first appeared as short, thickened, undifferentiated tubes at the proximal end of the tentacle ( Figure 64 View FIGURE 64 ). In the preserved specimens the distal end of this tube was often curved to one side, and it was part that next began to elongate and to twist itself into 2–3 spirals to form the rudimentary cnidoband, which at this stage did not appear to be covered by a membrane. At the same time the involucrum, between the pedicle and the cnidoband began to differentiate. It formed a horseshoe shaped swelling with the two loose ends closely apposed. Simultaneously the terminal process began to form as a flattened irregular swelling at the distal end of the cnidoband, with two short, broad distal protuberances ( Figure 65 View FIGURE 65 A). The terminal process continued to enlarge into an almost spherical, relatively thick-walled swelling, bearing two, asymmetrically placed "horns"; one terminal and the other sub-terminal ( Figure 65 View FIGURE 65 B, C). Up to this stage the pedicle remained short and broad, with a relatively wide central canal that at first was straight, but later began to twist into coils ( Figure 65 View FIGURE 65 C), while the involucrum showed no further sign of development.

During this stage an external membrane began to cover the cnidoband. At first it was tight against the cnidoband, but later began to expand so as to leave a gap between. This was the ultimate stage found in most of the specimens, but in the holotype three tentilla were found that showed further development ( Figure 65 View FIGURE 65 G, H). On these the terminal process expanded in size and its walls became thinner and indistinct from the membrane covering the cnidoband. Thus a thin-walled spherical cavity was formed that enclosed, usually in its proximal half, the cnidoband, and still retained the terminal and sub-terminal "horns". On one tentillum ( Figure 65 View FIGURE 65 H) the cnidoband lost its regular coiling and formed a series of irregular loops. Whether this was an artefact caused by the breaking away of the proximal part of the cnidoband from the pedicle, is not clear, although other, less developed tentilla (e.g. Figure 66 View FIGURE 66 E) also showed a less regularly coiled cnidoband. No clear evidence for the presence of elastic or angle bands was found.

Palpon: The palpons ( Figure 68 View FIGURE 68 A) measured up to c. 3.3 mm in length; the larger ones tending to be ovate, while the smaller ones were cylindrical or club-shaped. All possessed a small rounded proboscis region at their distal ends. Almost all of the largest palpons did not possess a palpacle, but it is clear that the latter must have been detached as such a structure was still attached to many of the younger ones ( Figure 68 View FIGURE 68 A). The palpacle was annulated, with quite long segments between each annulation and appeared to bear a few, very small, ovate nematocysts, but these were not examined in detail. The palpon itself was thin-walled and featureless, and was devoid of any nematocysts.

Gonophores: Gonophores of both sexes were present ( Figures 68 View FIGURE 68 B). The youngest gonophores consisted of spherical processes borne on short narrow pedicles, with the sexual products occupying the whole of the subumbrella cavity, and only a narrow distal opening. As they grew the gonophores became more elongate with a wide pedicle, through which the gastrovascular cavity passed, occupying approximately a third of its length, and the subumbrella cavity extending distal to the sexual products, and was widely open. In its lining were four straight lateral canals. Further development saw a re-shortening of the pedicle, which still remained wide, and an enlargement of the subumbrella cavity; although the overall length of the gonophore only increased slightly. No nematocysts were noted on the gonophores.

Distribution. All five specimens were collected in the "Tongue of the Ocean" in The Bahamas at depths ranging from 640 to 884 m.

Thus it is clear that the species parchelion   sp. nov. should be placed in a separate genus from the Cordagalma   species but, at present, we cannot be certain whether it actually belongs within the same family. However, the two genera are both monoecious and the nectophores are developed on the ventral side of the nectosome. Molecular genetic data are now available for some Cordagalma   species, other than C. ordinatum   (Steve Haddock, personal communication), but until such can be gathered for Cardianecta parchelion   sp. nov. one can only speculate on its systematic relationships.

Etymology. The generic name refers to the heart-shaped nectophore. The specific name is derived from the Greek "like a chela", and refers to the supposed chela-like appearance of the "horns" on the terminal process of the tentillum. 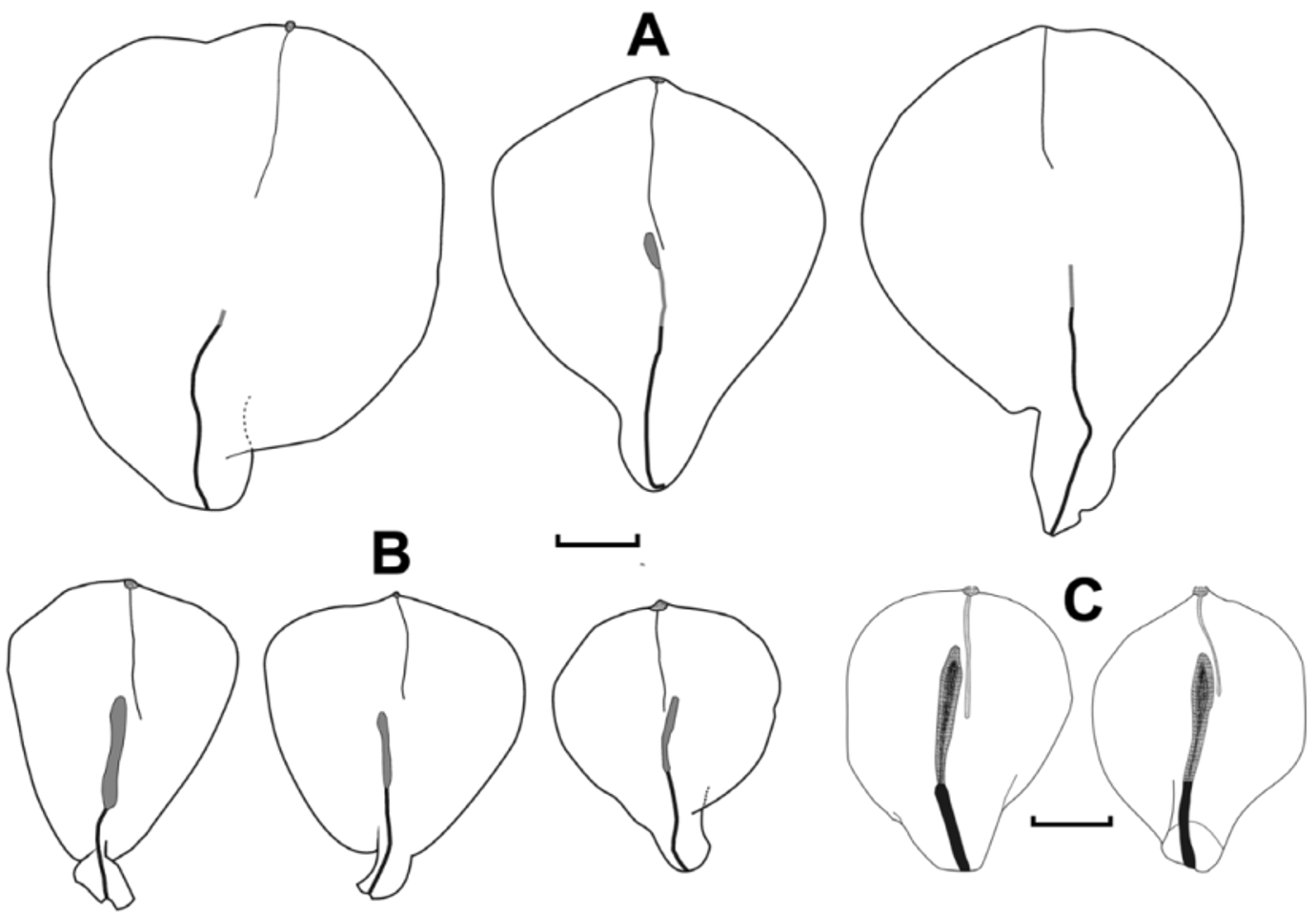