Diagnosis. Nectophores with short, either rounded or truncated, basal process; without any pigmentation or lateral ectodermal process or cell patches on the velum of the ostium.

Bracts kite-shaped with a V-shaped transverse ridge and a weak median ridge dividing the distal end into two facets. No patches of ectodermal cells. Palpons attached at proximal end. Tentilla with long distal cnidocils and no rostrum.

Material examined. A total of twelve specimens have been collected by the ROVs Tiburon and Doc Ricketts; all in the region of Monterey Bay, California, U.S. A:

The specimens collected during the two emboldened were frozen for molecular studies.

* In situ frame grabs exist for these specimens but, apart from the one shown below, none is worth reproducing.

Holotype: The specimen collected during Doc Ricketts Dive 29 has been designated the holotype, and will be deposited at the United States National Museum (Smithsonian Institution), Washington, DC.

Paratype: The specimen collected during Tiburon Dive 985 has been designated the paratype, and also will be deposited at the United States National Museum (Smithsonian Institution), Washington, DC.

The remaining specimens will be placed in the collections of Dr Casey Dunn, at Brown University, Providence, Rhode Island, USA.

Description. The small size, fragility and great transparency of the colonies of Cordagalma abyssorum   sp. nov. made them very difficult to locate in situ, let alone capture. An in situ frame grab of C. abyssorum   sp. nov. is shown in Figure 13 View FIGURE 13 , from which it was estimated that in life, the nectosome was c. 1.7 cm in length, which would indicate that the longest specimen photographed had a total length of c. 11 cm. In several cases as the ROV approached, the specimen began to autotomise much of its siphosome, leaving only a small remnant at the anterior end. Further, they tended to totally disintegrate within the collecting device so that it was necessary to search through 6.5 (Detritus Sampler) or 6.9 (Suction Sampler) litres of water to try to find the various, often completely transparent, components of the colony. Often such a search resulted in the finding of only a few nectophores and bracts. Gastrozooids and gonophores, although they should be more visible, were rarely located, as indeed was also the case for the main stem. For this reason, the description of C. abyssorum   has had to be based on several specimens as, for instance, good nectophores but poor bracts were found with the holotype, while the reverse was true for the paratype. Nevertheless, although the holotype specimen lost most of its siphosome during collection it remained remarkably intact and a photograph of the specimen, taken in the laboratory, is shown in Figure 14 View FIGURE 14 .

Pneumatophore: The denuded stem of Cordagalma abyssorum   sp. nov. was rarely recovered from the samples. However, when found the pneumatophore was very small measuring 0.23 mm in length, by 0.14 mm in diameter. It was completely featureless and bore no signs of any pigmentation. Although the nectosome and pneumatophore obviously were present after the holotype specimen was removed from its collector (see Figure 14 View FIGURE 14 ), they were, apparently, not preserved.

Nectosome: For the preserved specimens the nectosome, when found, was highly contracted and measured about 0.4 mm in length, excluding the pneumatophore. As noted above this region, including the pneumatophore was estimated to be c. 1.7 mm in length in life. The photograph of the holotype specimen ( Figure 14 View FIGURE 14 ) taken shortly after collection clearly shows the typical biserial arrangement of the nectophores, which were attached to the ventral side of the nectosome.

The proximal groove, demarcated by the rounded edges of the axial wings, was relatively shallow in the upper half of the nectophore and virtually non-existent in the lower half. The nectosac was rounded basally but, depending on the extent of the axial wings, had more or less pronounced lateral apical extensions. The long ascending and descending mantle canals were approximately of equal length, and the short pedicular canal arose at their junction and passed directly to the nectosac, where it divided off the four radial canals. The upper and lower canals were straight, while the laterals to a greater or lesser extent arched upwards at first and then down to join the ostial ring canal at its mid-height. There were no signs of any tracts of large ectodermal cells arising at these latter points. No pigmentation was noted anywhere on the nectophores, and there were no patches of cells on the velum.

Siphosome: Very few pieces of the siphosomal stem were found, and these were highly contracted, and generally denuded so that the exact arrangement of the cormidia could not be discerned. However, a close-up photograph of the remaining proximal part of the siphosome is shown in Figure 17 View FIGURE 17 . There the bracts with the terminal swelling of their canal penetrating into the mesogloea, the gastrozooids with their tentacles, and the male gonophores are obvious, but no palpon can be identified.

Bract: The minute kite-shaped bracts ( Figure 18 View FIGURE 18 ) measured up to 1.6 mm in length and 1.3 mm in width. They were flattened on their lower surface, while the highest region on the upper surface formed a flattened, rounded rhombus. The two proximal sides of the rhombus were defined by weak ridges, while the distal sides formed part of a well-defined chevron-like transverse ridge. A weak median ridge joined the centre of the transverse ridge to the distal end of the bract, demarcating two distal facets. This latter ridge, and the transverse ridge, bore widely spaced, very small, spherical nematocysts. These could also be present on the distal parts of the two other ridges, and along the central part of the inner margin of the distal facets. However, for the larger bracts particularly, these nematocysts had been lost. The narrow bracteal canal ran from close to the proximal end of the bract to approximately half its length and, in the preserved specimens, always appeared to remain in contact with its lower surface. However, this appeared to be a preservation artefact as the close-up photograph of the siphosome of the freshly collected specimen ( Figure 17 View FIGURE 17 ) clearly showed that the distal end of the bracteal canal penetrated for a short distance into the mesogloea and terminated in a slight swelling.

Gastrozooid and tentacle: The small anterior gastrozooids of the holotype specimen measured up to c. 1 mm in length and c. 0.4–0.5 mm in maximum width in their preserved state ( Figure 19 View FIGURE 19 A). The proximal basigaster was distinctly separated from the distal stomach region and was variable in width, but usually occupied about 1 / 5 th the total length of the gastrozooid. Only the proximal part of the tentacle remained attached and included the very young buds of the tentilla. A close-up photograph of the siphosomal stem of the holotype specimen before preservation ( Figure 19 View FIGURE 19 B) clearly showed a contracted distal proboscis region; an inflated stomach region and a cylindrical basigaster containing numerous, presumably oil-filled, droplets and occasionally pigmented, vesicles of various sizes. The gastrozooid was attached by a short peduncle.

Tentilla: Very few, mostly broken apart, tentilla were found with the all of the specimens of Cordagalma abyssorum   sp. nov. examined. The younger ones ( Figure 20 View FIGURE 20 A, B) showed a semicircle of five, loosely attached stenoteles proximally, and many detached and discharged nematocysts of this type were observed entangled with debris. The majority of the cnidoband was occupied by one type of nematocyst, presumed to be anisorhizas, with a clump of a small number of presumably isorhizas at the distal end. These had short stout cnidocils projecting from them. On a slightly more mature tentillum ( Figure 20 View FIGURE 20 C) the stenoteles were less obvious, the central region broader and shorter, and the distal nematocysts had slightly longer cnidocils. There was some evidence, from broken fragments, that these cnidocils grew longer and broader, forming talon-like structures as the tentilla reach maturation. However, no fully mature tentilla were observed.

Palpon: The only structures that looked like they might be palpons were found with the Doc Ricketts Dive 196 and 197 specimens ( Figure 21 View FIGURE 21 A). They were featureless bags with a maximum length of 0.85 mm and a maximum width of 0.28 mm. No nematocysts were found in association with them, and they would appear to have been attached by their proximal ends. Palpons could not be identified with certainty on the anterior part of the siphosomal stem ( Figure 17 View FIGURE 17 ), but there are several small buds.

Gonophores: Mature gonophores were only found for a few specimens, and in each case only gonophores of one sex were found. However, there was insufficient evidence to suggest that the species might be dioecious. The small male gonophores ( Figure 21 View FIGURE 21 B) measured c. 0.55 mm in length and 38 mm in diameter. The manubrium could clearly be seen in some. They were borne on short, narrow peduncles and at their distal ends had a small pore. However, in the close-up photograph ( Figure 19 View FIGURE 19 B) more mature male gonophores could be seen as elongate structures over half the length of the gastrozooids.

The female gonophores ( Figure 21 View FIGURE 21 C) measured up to 2.5 mm in total length, with a bell length of 1.9 mm and diameter of 1.5 mm. They were quite unlike the male gonophores in that they consisted of a distinct bell, with a short but broad pedicle, within which the single egg was developed. In the most mature gonophores the outline of the bell was barely distinguishable.

In addition frame grabs that were probably of Cordagalma abyssorum   sp. nov. were taken during the following dives:

These showed that potentially specimens could be found as shallow as 2075 m and as deep as 3614 m, although the identity of these specimens is not absolutely certain.

Etymology. The specific name is derived from the Latin abyssus meaning the deep sea. 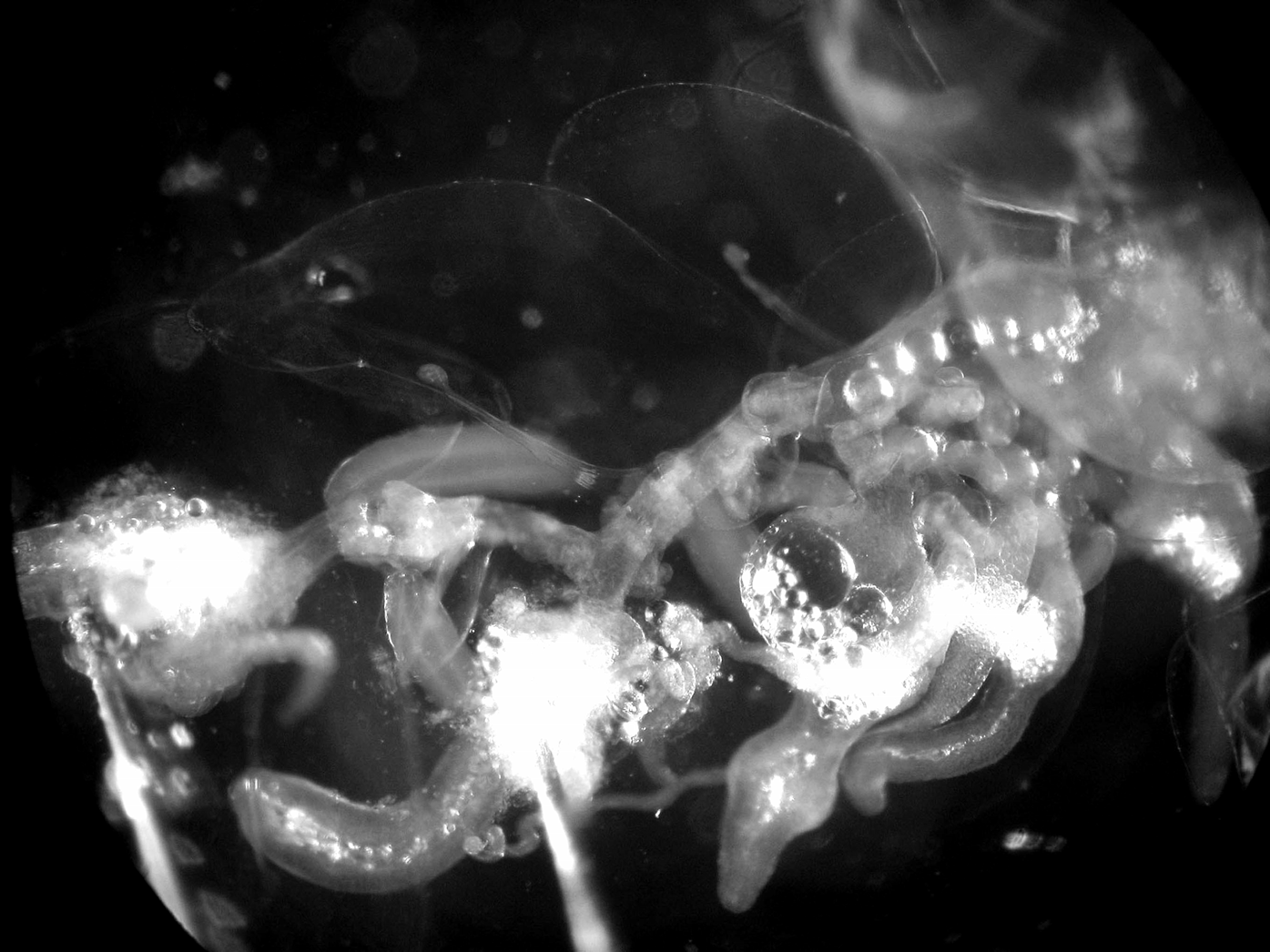 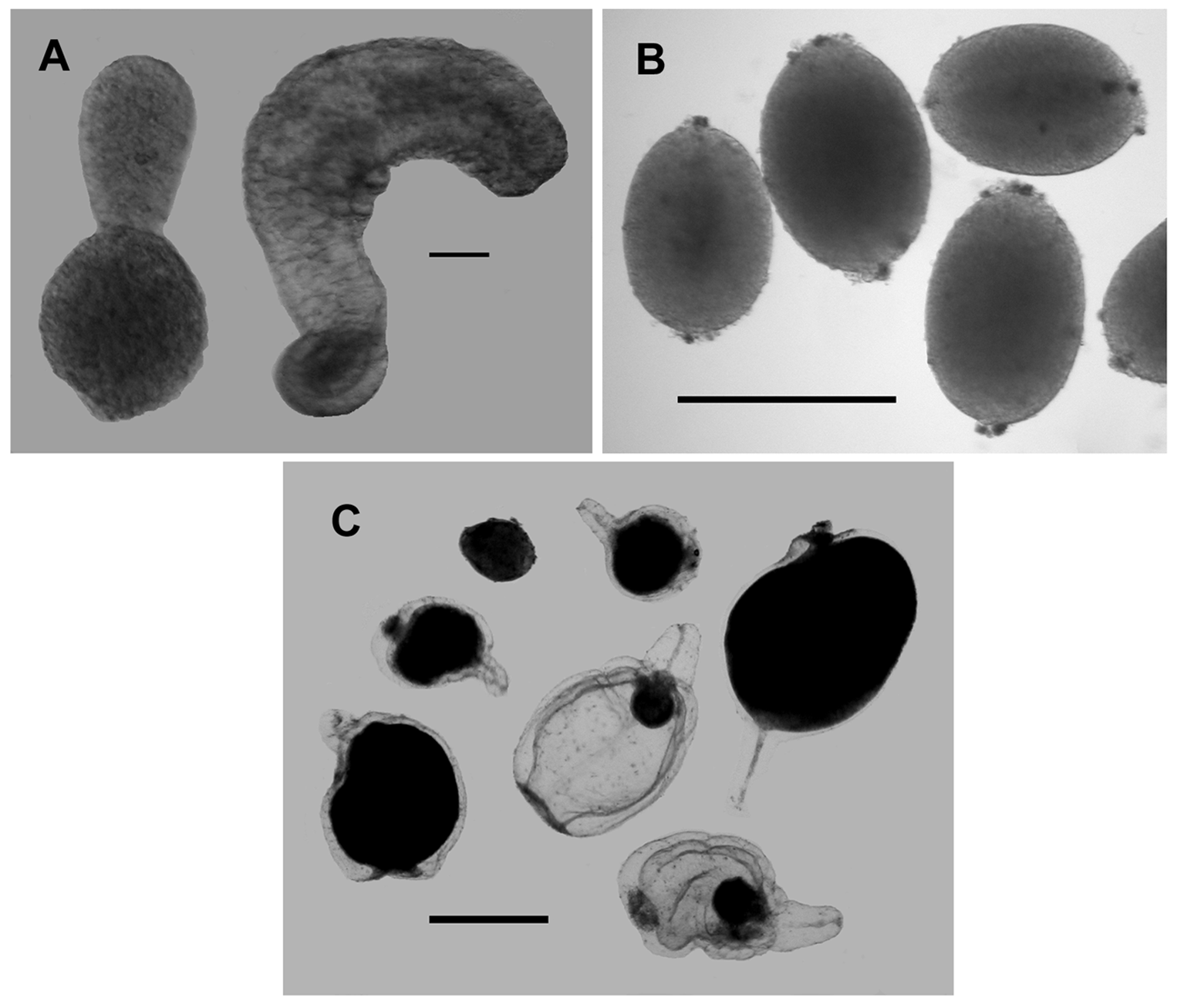