The name Cetonia floricola fausti Kraatz, 1891  was proposed as a variety of Cetonia floricola (Herbst, 1790)  (= Protaetia (Potosia) metallica (Herbst, 1782))  , based on a single specimen originating from the “Caucasus” (without exact locality data) collected by J. Faust ( Kraatz 1891). Reitter (1899) and Olsoufieff (1916) cited Protaetia fausti  as variety of Potosia cuprea (Fabricius, 1775)  , reporting it for “Russian Armenia ”, and in Winkler (1929) classified it as a subspecies with the distribution in “ Armenia ”. In his revision of Palearctic Potosia Mulsant & Rey, 1870  , Mikšič (1961) considered P. cuprea  as a single polytypic species, dividing it into 16 subspecies. The name Protaetia fausti  was not mentioned in this work.

In his monograph of flower chafers of the fauna of the Soviet Union, Medvedev (1964) classified several forms of P. cuprea  complex as separate species. One of these names was Potosia fausti  , for which he described specimens at his disposal that had originated from southwestern Georgia (Borzhomi) and northwestern Armenia (Leninakannow Gyumri). Mikšič (1966a, 1966b) did not accept Medvedev’s classification and as before considered P. cuprea  as a single polytypic species.

Rataj (1986) used the description of Medvedev (1964) to identify a small series of specimens from central Armenia (Garni near Yerevan) as P. fausti  . Rataj (1986) briefly described this taxon and illustrated the male genitalia for the first time. The general distribution of the taxon was given according Medvedev (southwest Georgia and southwest Armenia)  . Later Rataj (1998) included the neighboring part of northern Turkey in the distribution of the species, but the brief description and photograph he used in this publication were based on his material from central Armenia (“Garni and Geghard”). This concept of the species and the usage of the name P. fausti  was accepted by Baraud (1992) and Krajcik (1999).

It must be stressed that none of these authors except Mikšič (and possibly Reitter) studied the holotype of P. fausti  . Mikšič (1987) briefly re-described the holotype and came to the conclusion that P. fausti  was a color form of P. cuprea splendidula  .

Through the kindness of Dr. Stephan Blank and Mr. Lutz Behne ( SDEI), we have studied photographs of the P. fausti  holotype (Holotype, ♀: Caucas.[us] (h) / var. Fausti  mihi, 90, aurei### luic### imaculata (h, Kraatz’ hand) / subfus. med. purp. (h) / coll. Kraatz (p) / ab. fausti Kr.  (h) / TYPUS (p, on red paper) ( Fig. 9View FIGURES 1 – 9). Our study of the holotype images allowed us to support opinion of Mikšič (1987) that name P. fausti  must be a junior synonym of Protaetia (Potosia) splendidula  . Clarification of the taxonomic status of species and associated synonyms requires a review of specimens from across the distribution, which is the subject of a separate work.

Our examination of figures from Rataj (1986, 1998), photographs of the specimens mentioned by Medvedev, specimens from the IZAY collection, and several specimens recently collected in Armenia revealed that the name Protaetia fausti  , in the erroneous current usage, actually applies to two distinct species. One of the species is distributed in northeastern Turkey, and has already been described as P. jelineki (Petrovitz, 1981)  . No name is available for the second species so it is described below as a new species. 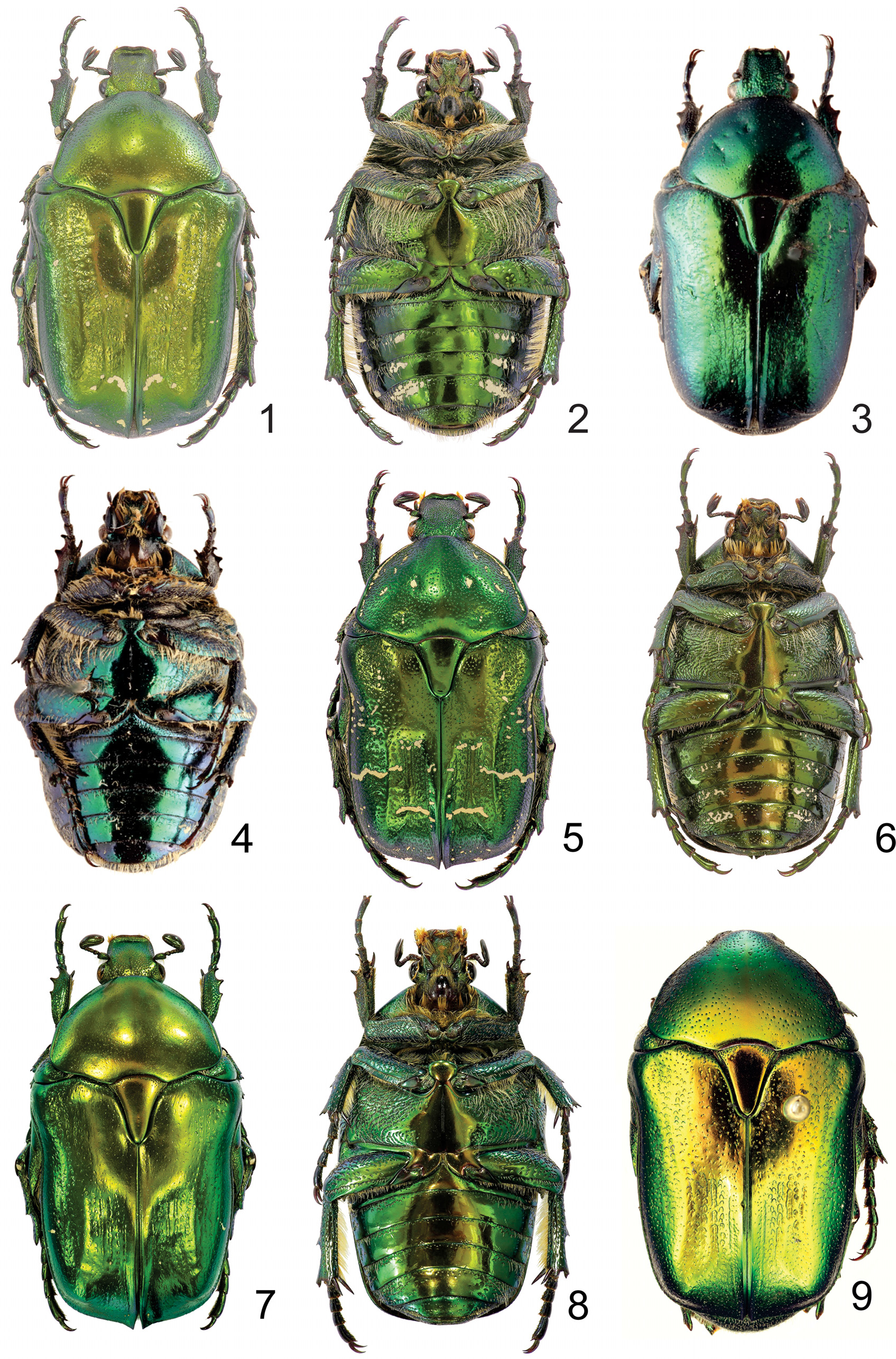