Remarks. The species was described from the Banks collection and ZIMSEN (1964) mentioned one specimen in BMNH and one in JFUK. Based on the description, Fabricius must have had at least two specimens, as he mentioned one green specimen with a yellow margin and the other uniformly pale-yellow. The Banks Collection includes two specimens, on identical pins, and not one as listed by ZIMSEN (1964); one is apparently the green individual and the other the pale-yellow one mentioned by Fabricius, which is a teneral specimen. Both agree with the original description, as does the JFUK specimen, and there is an argument to include the latter as a syntype (on the assumption that Fabricius retained one).

Charidotis marginella   forms together with two allies a natural group of three species de¿ned by uniformly yellow-green dorsum (golden when alive) and latero-posterior slope of elytra irregularly punctate. BOHEMAN (1855) described the two species included in this group and separated them by pronotum ¿nely punctate and elytra more convex with distinct postscutellar hump ( C. marginella   and C. Àavicans Boheman, 1855) and C. punctatostriata Boheman, 1855   with pronotum distinctly punctate and elytra weakly convex. SPAETH (1936) also mentioned that the ¿rst two species have pronotum more rounded on sides. All three specimens have weakly convex elytra without a distinct hump and rather narrowly rounded lateral sides of pronotum but they differ in the punctation of pronotum. The two BMNH specimens have densely punctate lateral sides of pronotum and are conspeci¿c with typical C. punctatostriata   specimens while the JFUK specimen has them weakly and ¿nely punctate and is intermediate to C. marginella sensu BOHEMAN (1855)   . The punctation of pronotum and convexity of elytra are evidently variable characters as we have studied long series of C. punctatostriata   / marginella   specimens collected in one locality and there are specimens with weakly convex elytra in combination with ¿nely punctate pronotum while others show densely punctate pronotum and subgibbous elytra with distinct dorsal hump like in C. marginella sensu BOHEMAN (1855)   . BOHEMAN (1855) also mentioned that the species differs in broader or narrower body respectively, however, this seems to be at least partly affected by gender of specimens and this feature appears also to be different population to population. It is desirable to conduct more ¿eld studies to resolve status of these nominal taxa, however, we here synonymize C. punctatostriata   and C. herbida Boheman, 1855   (previously synonym of the latter) with C. marginella   because the two BMNH specimens agree with the types of C. punctatostriata   and were certainly those used by Fabricius. As mentioned above the JFUK specimen is slightly different and most likely Fabricius obtained it after the description of C. marginella   . Therefore we designate the fully sclerotized BMNH specimen as the lectotype and exclude the JFUK specimen from the type series. 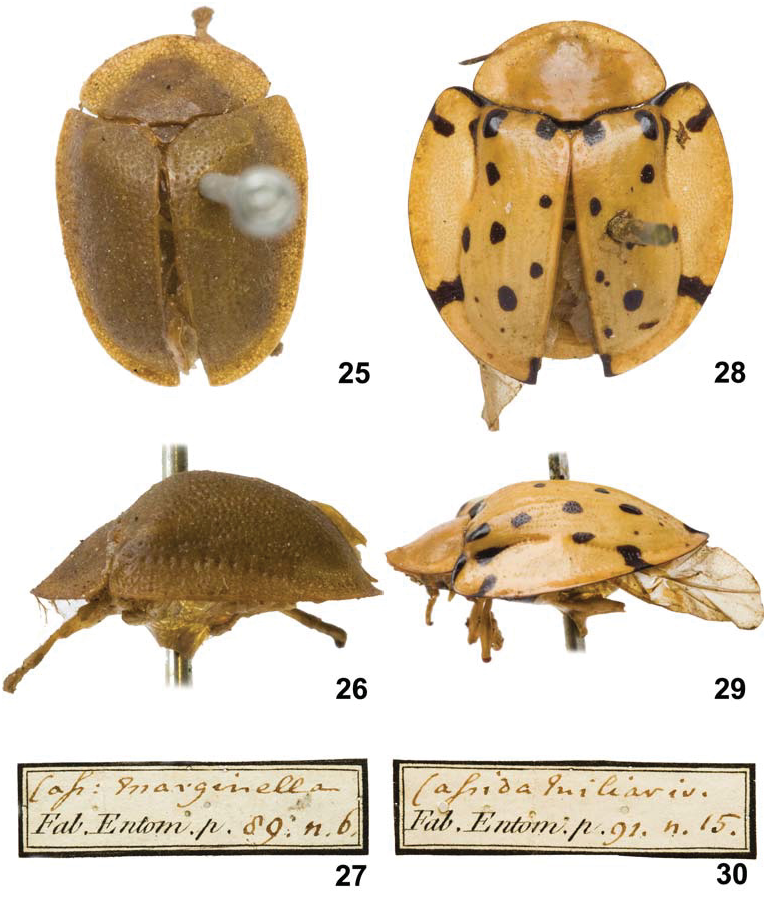