Etymology. The specific epithet fuentesi   is dedicated to our colleague and friend Eduardo Fuentes Contreras (University of Talca), who has studied Chilean aphids from several points of view, see acknowledgements section.

Descriptions. Apterous viviparous females ( Figs. 3 View FIGURE 3 A-3D). From 941 specimens. When alive matt dark green to matt black. 1.00– 1.64 mm long; other metric and meristic features in Table 2 View TABLE 2 . Head, including clypeus and mandibular and maxillar lames and rostrum brown, sometimes with an incomplete epicraneal line. Frons more or less sinuate. Antennae six- or five-segmented, unrelated to body length or sample provenance. Antennal segments I, II, VI and a distal portion of V more-or-less as pigmented as cephalic dorsum; proximal part of antennal segment V and segments III and IV in six-segmented antennae or III + IV in five-segmented antennae brownish yellow to light brown. Antennal segments I, II and ventral side of III smooth, dorsal side of III weakly imbricated, segment IV with small imbrications or transversal striae, segments V and VI imbricated. Rostrum exceeds hind leg coxae, brownish yellow and progressively darkened. Ultimate rostral segment with straight edges and with 2 accessory setae. Coxae, most of femora, distal portion of tibiae, and tarsi brown, sometimes as cephalic dorsum; other parts of legs brownish yellow. Tarsal chaetotaxy formula 3.3.2. Prothorax with sclerotized, reticulated and variably pigmented sclerites or patches, which do not meet together to form transversal   bands; mesothorax with marginal patch and a transverse complete or fragmented transversal band, both two being well pigmented and reticulated; metathorax with marginal sclerites or patch, pigmented and reticulated. Dorso-abdominal sclerotisation and pigmentation very variable, unrelated to body length, host plant, or sample provenance; in most sclerotized and dark specimens: segments 1 to 5 with a spinopleural irregular patch, or only 3 to 5 and then segments 1, 2 with irregular spinopleural bands, segment 6 also with a transversal band, all with small marginal sclerites that support the tubercles and all brown and reticulat- ed, segment 7 with setiferous sclerites and segment 8 with a narrow transversal band; in less sclerotized specimens segments 1 to 7 without segmental sclerites and segment 8 with setiferous sclerites. Intersegmental and spiracular sclerites darker than segmental sclerites when they are present. Marginal tubercles on prothorax and abdominal segments 1 to 7 (may be lacking on 5 or 6), always wide and, those on prothorax shorter than eye length, those on abdominal segments 1 to 4 with diameter usually shorter than the marginal setae length and those on segments 5 to 7 smaller than others. Siphunculi very small —shorter than the basal width of cauda—, cylindrical, as brown as cauda and cephalic dorsum, with small flange and with imbrication, which is more abundant and thick on the ventral face than on the dorsal face. Genital and anal plates brown. Cauda with two distinctive parts, the proximal is large and the distal is narrow and more or less triangular or subcylindrical. Setae in general pointed, relatively robust and pale.

Alate viviparous females ( Figs. 3 View FIGURE 3 F-3G). From 51 specimens. 1.18–1.83 mm long. Very similar qualitatively to apterous viviparous females, differing from them, in addition to the configuration of the thorax, by the following features: (1) antennae more homogeneously dark, only the most basal portion of segment III is pale brown; (2) antennal segment III rougher and with 4–13 secondary sensoria, aligned over distal 2/3 or 3/4; (3) antennal segment IV usually with secondary sensoria, 1–3 in number and smaller than those on III; (4) marginal tubercles taller; (5) abdominal segments 1 to 6 without spinal or pleural sclerites and with relatively wider marginal sclerites, including pre- and postsiphuncular ones; (6) setiferous sclerites on segment 7 sometimes coalescent to form a bar. Metric and meristic features in Table 2 View TABLE 2 .

Oviparous females, apterous ( Fig. 3H View FIGURE 3 ). From 34 specimens. 1.29–1.60 mm long. Very similar qualitatively to apterous viviparous females, with the following differences, of which those marked with an asterisk are specific to oviparae: (1*) body larger, but without the distending and lengthening of the postsiphuncular segments present in some species of Aphis   ; (2) antennae homogenously pigmented and more or less as dark as cephalic dorsum; (3) rostrum not always exceeding hind coxae; (4) legs darker, especially hind legs, which are brown to dark brown, except a very small proximal portion of femur; (5*) hind tibiae homogeneously thickened, but not much thicker than tibiae of front and middle legs, and carrying 16 to 47 scent plates; (6) absence of abdominal continuous spinopleural patch on abdominal presiphuncular segments; (7) abdominal segments 7 and 8 only with some small setiferous sclerites; (8*) abdominal segment 8 with many more setae; (9*) genital plate with a pale middle portion and carrying many more discal setae; (10) cauda triangular. Metric and meristic features in Table 2 View TABLE 2 .

Males, apterae ( Fig. 3I View FIGURE 3 ). From 8 specimens. 1.15–1.34 mm long, smaller than oviparous females. Very similar qualitatively to apterous viviparous females, with the following differences in addition to presence of copulatory apparatus, with conical, robust and dark brown parameres, and secondary sensoria on antennal segments III, IV and V, respectively 5 to 13 (exceptionally 1), 4 to 8 (exceptionally 1) and 2 to 6: (1) antennae and legs darker; (2) paired spinopleural patches present from mesothorax to abdominal segment 6, many of them contacting or merging with the neighbours; (3) abdominal segment 7 with a transversal pigmented band; (4) cauda triangular to irregular pentagonal (two sides in contact with the anterior side of the pentagon have greater length than the rest). Metric and meristic features in Table 2 View TABLE 2 .

The species is monoecious holocylic; oviparous and males were collected at medium altitude (870 m) in a relatively early date in autumn. Hind tibiae of oviparae are not especially thickened and carry a small quantity of scent plates, which correlates with the apterism of males.

Distribution. Collects of A. fuentesi   sp. n. have been made in the Argentinean Andean provinces of Neuquén, Río Negro and Chubut or to Chilean region of Maule, on the slopes of Paso Pehuenche. The furthest from each other are about 710 km in straight line. It is possible that the species is widely distributed, with a range that could correspond with those of their host species, both widely spread in Chile and in several of the Andean provinces of Argentina.

The ranges of the quantitative characters of A. fuentesi   and A. schinivora   overlap to a greater or lesser extent and having measured a significant number of specimens only some of them are useful in their separation (see Table 3 View TABLE 3 ). In addition, a useful discriminant feature is the relationship between the diameter of the marginal tubercle on abdominal segment 7 and the largest diameter of stigmatic sclerite 7, which is less than 1 in A. schinivora   and usually greater than 1 in A. fuentesi   , as well as the relationship between that tubercular diameter and the length of the marginal seta of the abdominal segment 7, which is conspicuously less than 1 in A. schinivora   and equal to 1 in A. fuentesi   . Conversely, apterous viviparous females of both species can be easily separated when alive as those of A. schinivora   are shiny black whilst those of A. fuentesi   are bottle green to matt black.Additionally, two important bionomic features corroborate their separation: the host plant and the life cycle; A. schinivora   is monoecious holocyclic on Schinus johnstonii   with an abbreviated life cycle with sexuales being present during midsummer ( Ortego et al., 2007), whilst Aphis fuentesi   is monoecious holocyclic on Baccharis   species with sexuales in autumn.

Differences between the various Aphis   species that live on Baccharis   species are shown in the following identification key. 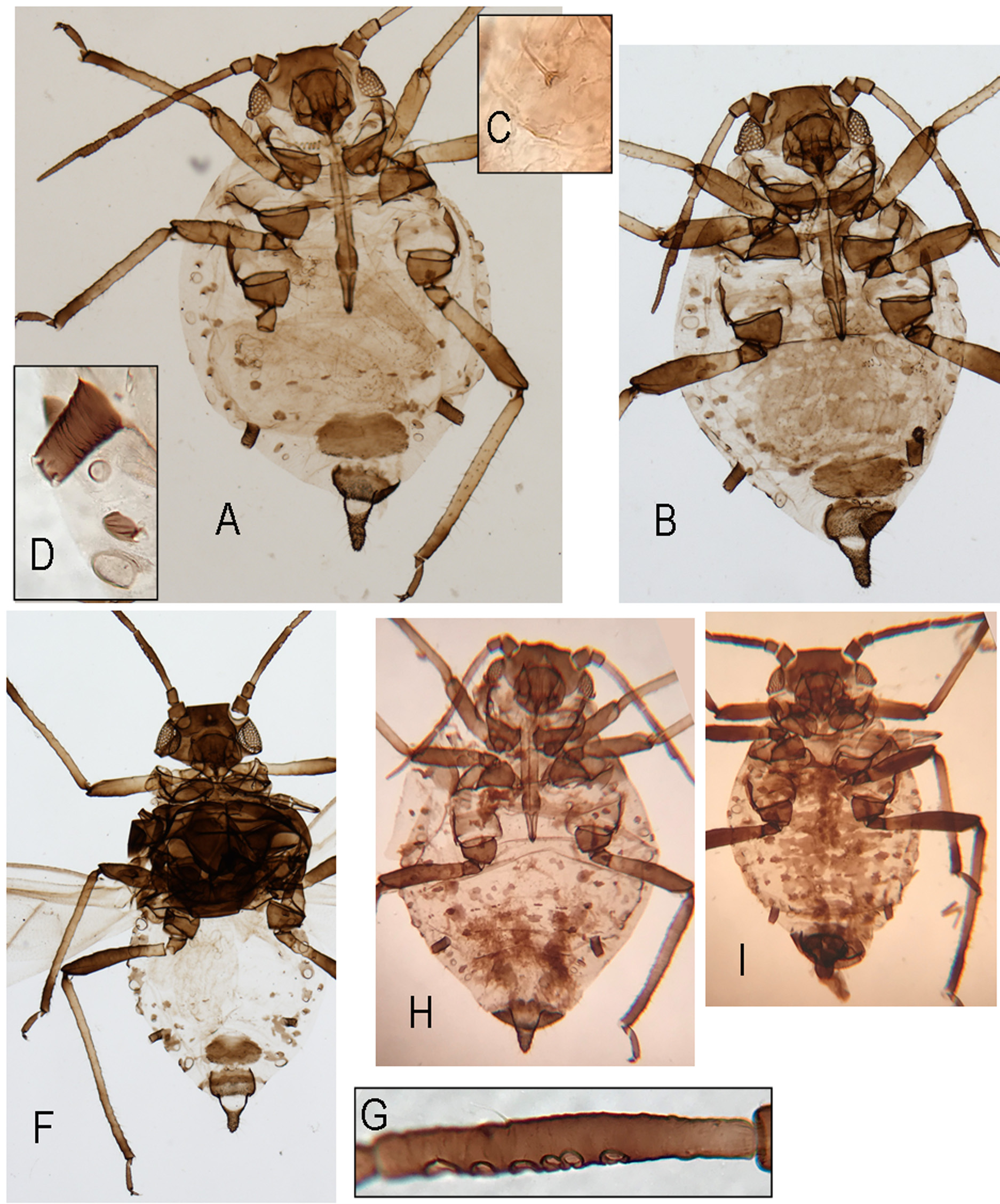