Oeneis chryxus   is widely distributed in Yukon Territory, with records from even and odd-numbered years, where it inhabits dry, open barrens and subarctic steppe (Ferris et al. 1983; Lafontaine & Wood 1997).

Various authors have considered Yukon populations of O. chryxus   to represent O. c. caryi   (Layberry et al. 1998; Guppy & Shepard 2001), although Burdick (1958) noted that this is incorrect. The type specimen of O. c. caryi   , as figured by Burdick (1958) and Warren et al. (2015), is markedly different than any material we have examined from Yukon Territory, and, other than the enlarged forewing ocelli, appears to fall within the normal range of variation seen in the western populations of O. c. calais   . Further studies are needed to confirm the taxonomic status of O. c. caryi   , although we believe O. c. caryi   should probably be considered synonymous with O. c. calais   ; alternatively, if O. c. calais   is considered to be a species-level taxon, O. c caryi   might be considered its western subspecies, as implied by McDunnough (1934) and treated by Kondla (2010).

Thus, the name O. c. caryi   does not apply to populations of O. chryxus   in northern British Columbia, Yukon Territory, or those barely entering eastern Alaska (see below). While the erection of a new subspecies name might be justifiable for these populations, we feel they are close enough to nominotypical O. chryxus   in phenotype to tentatively associate them with that taxon. The similarity of COI sequences between Yukon and Rocky Mountain material to the south (British Columbia, Alberta   , Montana, Colorado) also supports this arrangement, given that barcodes from Yukon specimens are extremely similar or identical to those from further south in the Rocky Mountains.

Oeneis chryxus   was first reported from Alaska by Holland (1900), based on a single female taken at Eagle City, on 10 July 1899, by Reverend S. Hall Young. We have examined two male specimens from Eagle, one collected by Young in 1901, and another collected by Reed Heilig in 1903, both of which are typical of O. chryxus   found to the east in Yukon Territory. One of the specimens bears a blue “paratype” label reading “klondikensis FC”, affixed by Frank Chermock. This name was never formally proposed, but was apparently intended to represent O. c. “caryi” of recent authors (e.g., Layberry et al. 1998; Guppy & Shepard 2001). The “holotype” and “allotype” of “klondikensis”, which we also examined, are from Dawson, Yukon Territory, and a second “paratype” we examined is from Whitehorse. More recently, Guppy & Shepard (2001) indicated the presence of O. chryxus   in the Alaska Panhandle, in the vicinity of Skagway. While we have not examined specimens from this area, this material is likely to be morphologically like adjacent O. chryxus   populations in southern Yukon Territory and far northwestern British Columbia.

Thus, with the delimitation of O. tanana   , it appears that O. chryxus   just barely penetrates into Alaska from Yukon Territory, along the Yukon River corridor, where it is known from two sites just 9.5 km. (5.9 mi.- at Eagle) and 60 km. (37 mi.- at Kathul Mtn.) west of the Canadian border ( Fig. 7 View Figure 7 ). Despite considerable collecting efforts by various researchers along the Taylor and Steese highways, which traverse the Yukon-Tanana uplands separating the Yukon and Tanana   rivers, O. chryxus   remains unreported from the region (the record from the central Yukon-Tanana highlands indicated by Philip and Ferris (2015) represents a misplaced Kathul Mountain record). Likewise, O. chryxus   appears to barely extend into the Alaska Panhandle near Skagway, presumably from widespread populations just to the north in northwestern British Columbia. 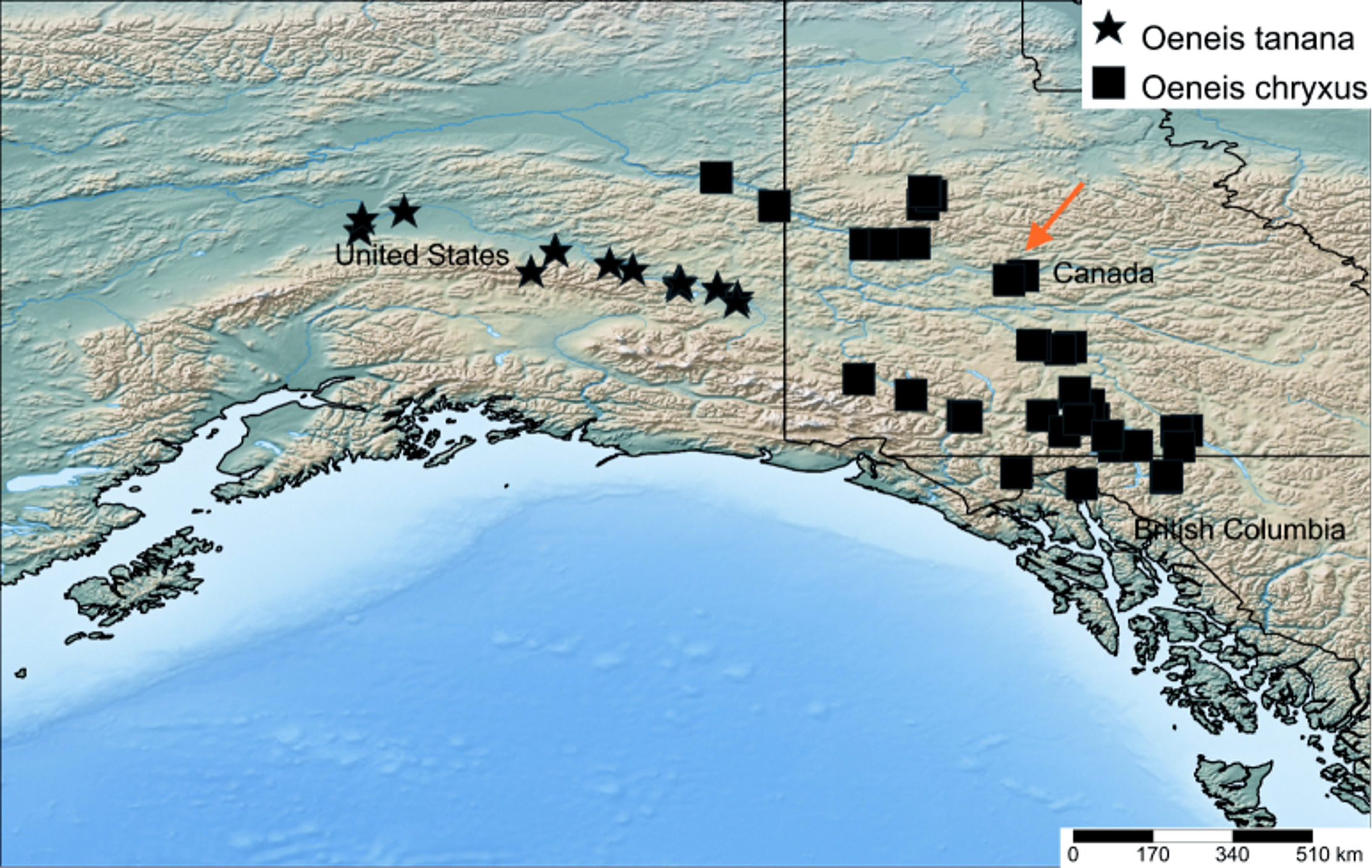