Forewing (FW). Apex rounded; outer margin covered with long scales. Dorsal ground color dark brown (R 130, G 112, B 62), darker (R 71, G 59, B 35) and diffused discal, postdiscal marginal and submarginal lines are evident in DFW, the same as a submarginal dot in M 1 -M 2, discal and postdiscal lines are much diffused and darker (R 86, G 62, B 34) than the ground. VFW color light brown (R 150, G 129, B 66); discal, postdiscal, submarginal and marginal lines reddish brown (R 104, G 67, B 25), straight discal line extending from discal cell to 2 A, the postdiscal line is branched at the top of the discal cell and it extends from R 5 base to 2 A, slightly undulated submarginal line from R 3 to 2 A, and a narrower marginal line from R 4 to 2 A. A single postdiscal black ocellus with a white pupil and encircled with a yellowish (R 170, G 140, B 52) ring and an external reddish brown ring between R 5 and M 2, the center of the ocellus is in M 2 -M 1, but its extent into neibouring cells may vary; two dark yellow patches between postdiscal and submarginal lines in M 3 -Cu 1 and Cu 1 -Cu 2.

Forewing (FW). Dorsal ground color paler (R 147, G 115, B 66) than of male, an ocellus between R 5 and M 2 with a white pupil and encircled by a yellowish ring. This ocellus and the discal, postdiscal, submarginal and marginal lines are more clearly defined than those of the male. VFW color pale yellowish brown (R 179, G 161, B 99). In general, the lines are lighter colored and their relative position is the same as the male, the submarginal line with an undulated pattern from R 3 to M 3 that continues with an irregular pattern reaching 2 A, with a continuous darker yellow (R 155, G 115, B 47) patch from M 3 -Cu 1 to Cu 2 -A 2.

Early stages and host plants. Unknown for the new species, but Singer et al (1971) and Beccaloni et al. (2008) report plants of the Selaginellaceae   as host plants for some species of Euptychia   .

Etymology. The name cesarense   refers to the type locality.

Diagnosis. The most obvious unique feature of the species is having a tornal ocellus in 2 A-Cu 2. The genitalia of E. cesarense   have the fultura superior and the superuncus longer than E. met   and, E. enyo   . Forster’s (1964) genitalia drawings of Euptychia   show the internal margin of the valva is plain without any dorsal processes or teeth. This species can be readily distinguished from E. rufocincta   , E. enyo   , E. hilara   , E. insolata   , E. jesia   , E. meta   , E. rufocincta   and E. westwoodi   by having, on the VHW, four black ocelli with a white pupil encircled by a yellowish ring and an external reddish brown ring between the postdiscal and submarginal lines in Rs-M 1, M 1 -M 2, Cu 1 -Cu 2 and 2 A-Cu 2.

In general aspect, the wing pattern of E. cesarense   resembles Euptychia enyo   and Euptychia rufocincta   . E. cesarense   can be distinguished from E. enyo   by lacking the two ocelli between M 2 -M 3 and M 3 -Cu 1 in VHW, and lacking the three non-pupilled ocelli in M 2 -M 3, M 3 -Cu 1 and Cu 1 -Cu 2 in VFW. The ground color in E. cesarense   is darker and the lines on the ventral side are narrower. The new species can be distinguished from E. rufocincta   because in ventral side the lines are narrower and in VFW the postdiscal line is branched. The genitalia of E. cesarense   is compared with Forster’s (1964) genitalia drawings of Euptychia   species and with E. meta   and E. enyo   , showing notable differences: the superuncus is very long, being the half of uncus length, the fultura superior is longer and slightly ventrally curved and the valvae are elongated with a pointed end and a smooth internal margin.

Distribution and ecology. Only known from the type locality in the Serranía del Perijá. The species flies in secondary-growth Andean and subandean forest with species of the genus Alfaroa, Hedyosmum, Weinmannia   and Clusia   from 1300 to 1800 m.

Discussion. Although there is no consensus about the adult morphological characters that define Euptychia   , the new species is described in this genus because it shows several similarities in ventral markings with other species currently placed in this genus. The relationships among Euptychia   and other euptychiines are not clear ( Murray & Prowell 2005; Peña et al. 2006), however it is possible to differentiate Euptychia   from related genera ( Forster 1964). The male genitalia in Euptychia   exhibit a smaller uncus, absent gnathos and very elongated fultura superior. Euptychia   can be separated from Euptychoides Forster, 1964   because male genitalia in Euptychoides   have a well developed gnathos and the aedeagus has cornuti ( Forster 1964), while these structures are not present in Euptychia   species. Forsterinaria   species present undulated dark brown discal, postdiscal, submarginal and marginal lines and submarginal ocelli in ventral view in both wings ( Peña & Lamas 2005); Erichthodes Forster, 1964   , in ventral view, present ocelli with bigger white pupils, and some species present white lines instead of those brown lines in Euptychia   ; Magneuptychia   includes bigger sized adults and wider uncus. 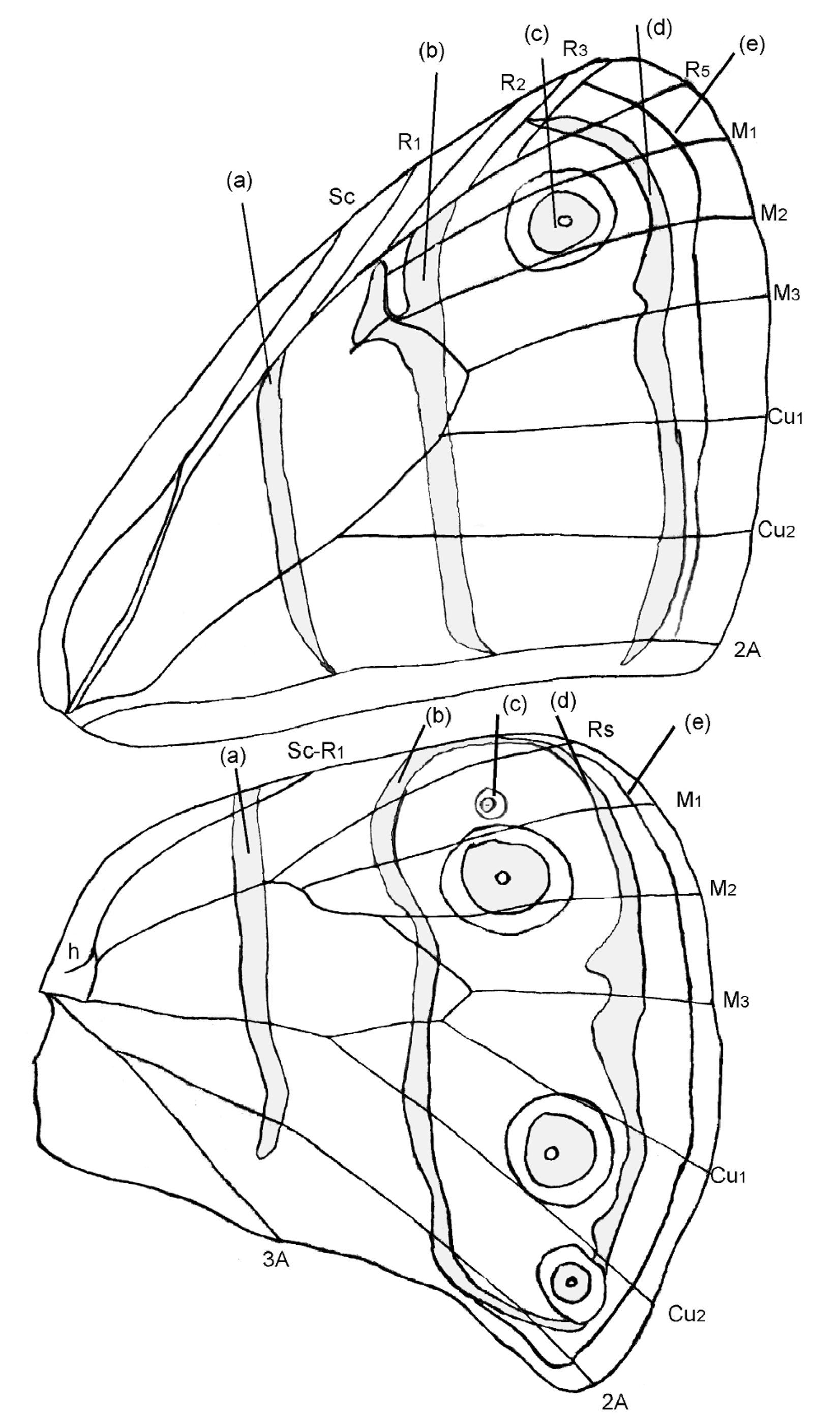 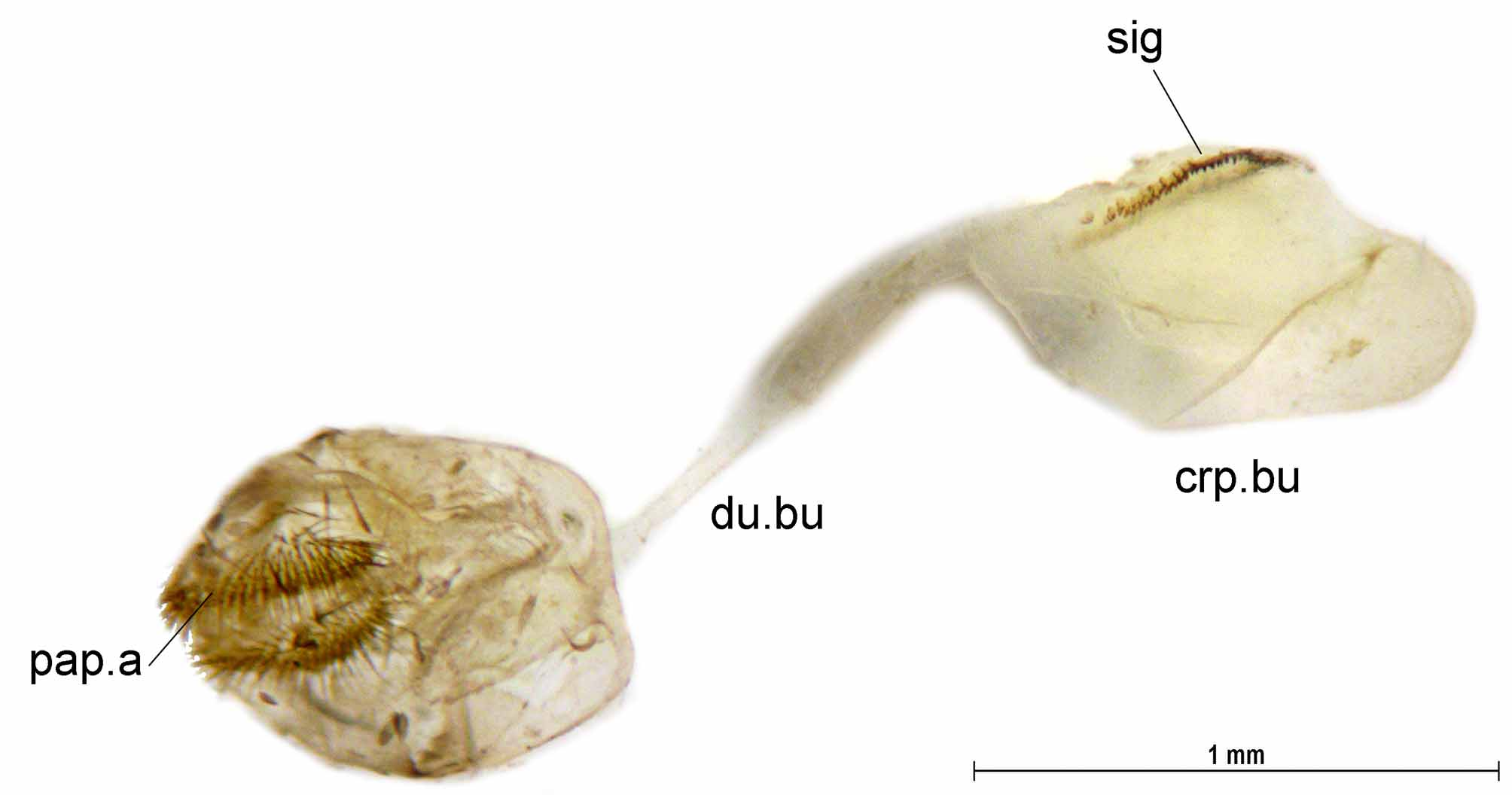