Female. Length: 0.7–1.3 mm. Colour: front aspect of head yellowish, genae and temples with dusky suffusions; posterior aspect of head dusky above, the lower one-third or so yellowish; antenna dominantly white to yellow, flagellum a little darker than pedicel and scape in some specimens. Mesosoma almost entirely dark brown to blackish-brown or with side lobes and posterior half of mesoscutum, scutellum, prepectus and acropleuron variably suffused with yellowish-brown to pale brown in some specimens. Metasoma blackishbrown, the base of gaster dorsally broadly suffused with yellowish-brown. Forewing disc entirely hyaline, venation brownish. Legs white to yellowish-white save basal half or more of hind coxa, and apical tarsomere of all legs, dusky, the base of fore coxa also somewhat darkened in some specimens.

Mesosoma ( Fig. 10 View FIGURES 10–16 ) 1.2–1.5 X as long as wide; mesoscutum in profile gently convex dorsally, in dorsal view gently rounded from side to side; mesoscutal midlobe slightly wider than long, without a median line, with 1 adnotaular seta at each side, in posterior half; mesoscutum with fine lineate-reticulate sculpture; scutellum fairly strongly convex in profile, 1.2–1.5 X wider than long with distinct sublateral and submedian lines; sculpture much as in mesoscutum; scutellum with 2 pairs of setae; dorsellum convex, smooth, medially about as long as propodeum; propodeum with median carina, without paraspiracular carinae, with very fine reticulate sculpture; spiracles less than their own diameter from anterior propodeal margin; cali each with 2–3 setae. Middle leg with tibial spur slightly shorter than basitarsus.

Metasoma short, about as long as mesosoma in dried specimens, somewhat circular in outline, hardly longer than broad, broadly rounded apically; epipygium wider than long; hypopygium reaching to about half the length of gaster; ovipositor, as seen in cleared slide-mounted specimens ( Fig. 15 View FIGURES 10–16 ), about half as long as gaster, slightly shorter than middle tibia, 6.0–7.3 X as long as gonostyli, the latter short and broad, not or hardly protruding caudally, 1.1–1.5 X as long as middle tibial spur; 2–3 cercal setae.

Male. Length: 0.7–1.2 mm. Colour: much as in female except head more extensively yellow in some specimens, leaving only the posterior aspect partly dusky; hind coxa almost entirely pale, only the base slightly darkened.

Differing structurally from the female mainly in the antenna ( Fig. 13 View FIGURES 10–16 ): scape with a ventral plaque, placed in apical half and extending from near apex to beyond mid length of scape, as in Fig. 13 View FIGURES 10–16 ; a single anellus present; funicle four-segmented, the basal segment quadrate to 1.3 X as wide as long, distinctly shorter than segments II-III which are subequal in size or progressively decreasing a little in size, each about 1.5–2.1X as long as wide; flagellum sparsely setose, the setae on funicle segments fairly long, slightly curved, not arranged in whorls; genitalia as in Fig. 16 View FIGURES 10–16 .

Remarks. Quadrastichus gallicola   can be easily distinguished from Q. ingens   , Q.bardus   and Q. erythrinae   by a combination of characters that include colour, the presence of 1 pair of adnotaular setae and the short, broadly rounded gaster with ovipositor hardly protruding. Quadrastichus gallicola   most closely resembles the undescribed Quadrastichus species   known from Togo and Benin, which can be separated from the former species in the female by its distinctive colour in which the head and basal half or so of the gaster are yellow in contrast to the remainder of the body which is blackish. Both these species fit the anysis - species group, as defined by Graham (1991), to a large extent. 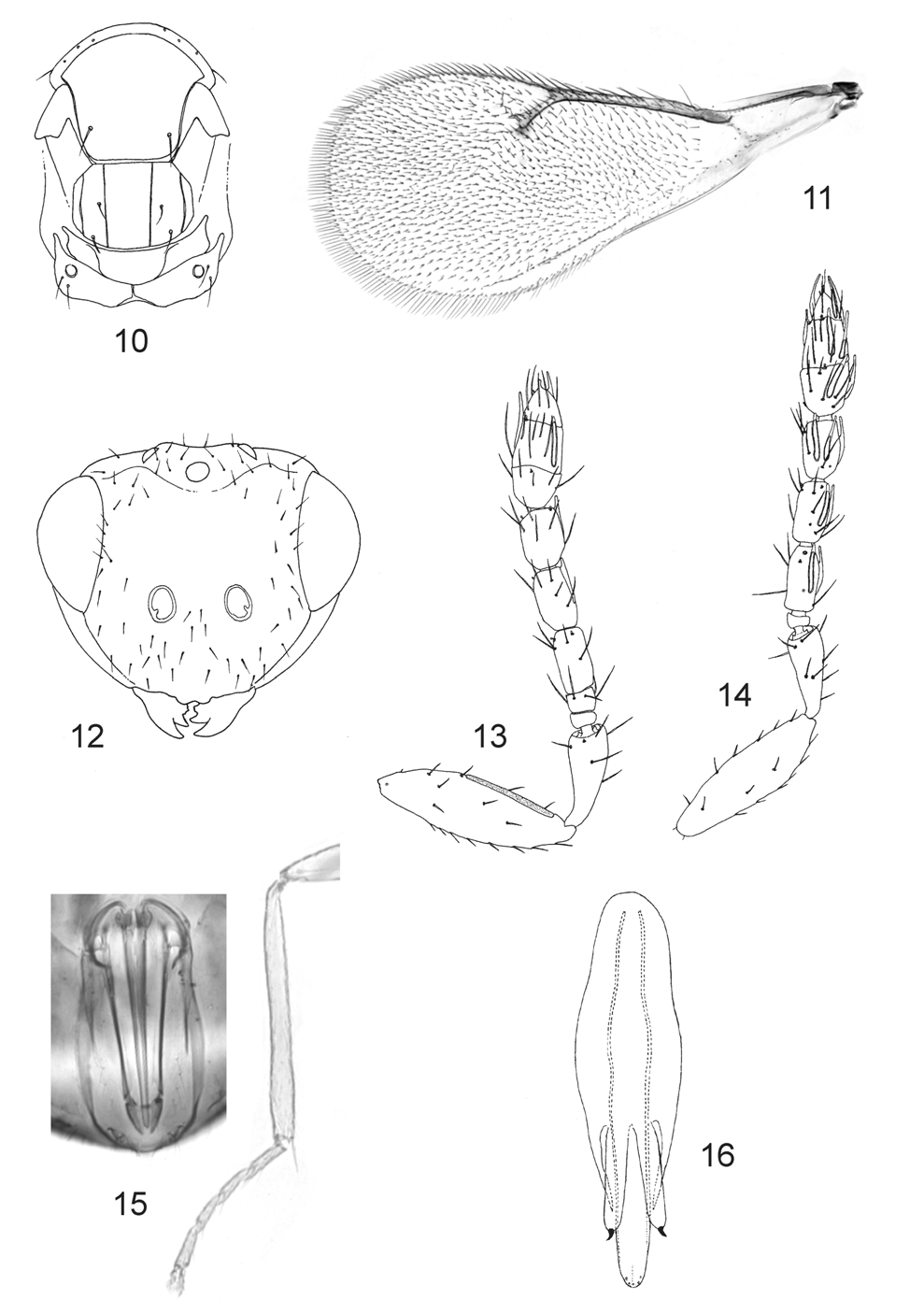