Description. Moderate-sized specimens, complete one being 47.9 mm long and 4.7 mm wide, for about 155 segments.

Notopodia short, rectangular, present on SG IV–XXVII (n=24). Notochaetae almost straight, medially winged with wings of same width, and distally serrated ( Fig. 4E–F View FIGURE 4 ); two rows of chaetae, those of anterior row less than half as long as those of posterior row.

Distribution. In Europe, from Norwegian Sea to Aegan Sea ( Gil 2011) and White Sea (GenBank accession number: HM417784 View Materials ) ( Fig. 26 View FIGURE 26 ). In France, from North Sea to Bay of Biscay ( Fauvel 1927; Jirkov 2020, this study, Resomar database). Also recorded from Canada, Japan, Gulf of Mexico and Sea of Okhotsk ( Gil 2011) but all these records have to be considered as doubtful. Mediterranean records could also correspond to misidentifications of Amphitrite rubra ( Risso, 1826)   (see Jirkov 2020).

Habitat. In empty shells in deep water, among rocks in shallow intertidal pools, on mud or sandy mud, among Zostera   , Fucus   or Laminaria   , on mussel and oyster banks ( Gil 2011), in mud (this study), upper sublittoral to intertidal (this study, Jirkov 2020). This range of different habitats/depths suggests that these records may represent more than one species.

Remarks. The original description is not sufficiently informative according to current standards, consisting of a mixture of behavioural considerations and morphological data. Specimens examined in our study match those of the description provided by Fauvel (1927, specimens from French coasts), and the description of Amphitrite johnstoni Malmgren, 1866   , by Holthe (1986, specimens from Scandinavia) and by Jirkov (2020, specimens from White Sea and UK, and also from the Western Pacific). Obviously a detailed review of this species is required including the re-examination of material from all the above localities.

Remarks. Recently, Jirkov (2020) proposed the synonymisation of Amphitritides   with Amphitrite   , arguing that characters such as the number of pairs of neuropodia with double rows of uncini is not unique to species of Amphitritides   , but can be also present in species of Amphitrite   . This is a character highly significant in terms of convergence in the family, and so it could be exhibited by some other genera besides these two. On the other hand, the structure of the lateral lobes is poorly understood in the whole family, and there is a great deal of misinterpretations regarding the shape, structure and orientation of the lateral lobes vs. the lateral ridges. Our suggestion is that Amphitritides   has no lobes (except mid-ventral one on SGI, as described in the diagnosis), and which clearly differentiates it from Amphitrite   , which has lobes on anterior segments, of variable length, usually on SG II–IV. It is clear, however, that the diagnosis of a genus is not based on a unique character that distinguishes it from the rest, but on a combination of characters, which defines the genus. It is also clear that a major revision of this group of genera, based on type material, if available, and fresh topotype material, is required in order to solve the relations within this group using both morphological and molecular data. 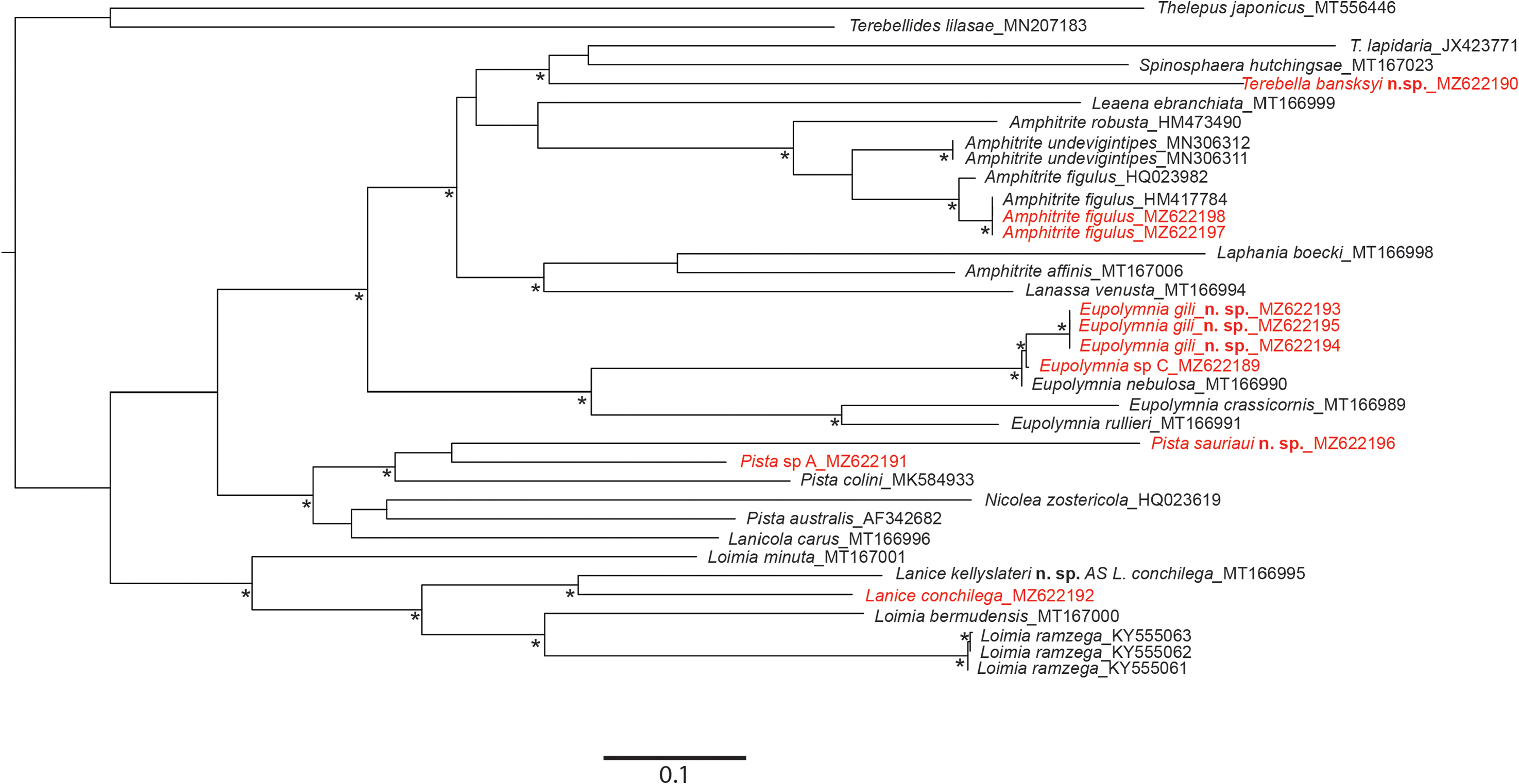