Distribution: Countries: Brazil, Guyana, Venezuela. Other records from: Mello-Leitão 1931: mentioned that is recorded from central America but did not mentioned a specific locality, this record do not make sense with known distribution of Heterophrynus   for which we consider it as a mistake.

Diagnosis. Heterophrynus cheiracanthus   can be differentiated from other species by present the following characters together: three teeth in the ectal portion of the basal segment of the chelicerae. Seven spines in the dorsal Patella   , and six in ventral Patella   , P7 and PVI are conspicuous. Five long spines in the ventral femur, spine FIII is smaller than FII and longer than FV, FIV is absent. Female genitalia with gonopod sclerites short, thick and curved at the distal portion. Seminal receptacles with a square shape ( Fig. 10D View FIGURE 10 ).

Similar species: This species is similar to H. batesii   but it presents a FIII longer than FII, also is similar to H. elaphus   but this species does not present the spines P7 and PVI. In both cases, the female genital of H. cheiracanthus   is very different ( Figs. 13D View FIGURE 13 , 20D View FIGURE 20 ). H. guacharo   is the most similar species, but differs in the genital, H. guacharo   presents a more elongated sclerite of the female gonopod, which rises out from a conical seminal receptacle (see Armas 2015, figs 1-2). Other similar species could be H. vesanicus   which also presents five spines in the ventral femur, however, the original description does not describe the sizes of the spines, the female genital is not described either, the original diagnosis says that the spines on the tibia of the pedipalp have an equal size, which differs from H. cheiracanthus ( Mello-Leitão 1931)   .

Male genital of H. cheiracanthus   differs from other species by presenting a very elongated and wide LaM, longer than the Pi, and LoL1 and LoL2 together ( Fig. 10A, B, C View FIGURE 10 ).

Sternum. Tri-segmented, segments are well sclerotized, the area around segments is also sclerotized. Tritosternum projected anteriorly, elongated, conical, with 11 setae in the basal region, two in the medial region and two more in the apex.

The second segment (tetrasternum) rounded and with two setae on medial region. The third segment (pentasternum) rounded, smaller than the second segment, has four setae, one on each side of the apical region, one on each side of the basal region. Metasternum longitudinally divided with two setae in each segment ( Fig. 8B View FIGURE 8 ).

Variation. Variation in measures and segments of the basitibia IV, tibia I and tarsus I, are provided in Table 3.

Male. Observed males have a similar size to the females ( Table 3). Spination pattern is the same as females. Genital operculum has an oval posterior margin, expanded to the third segment of the opisthosoma.

Male genitalia. (MZUSP 15859): LaM longer than Pi. LoL 1 longer than LoL 2, LoL 1 is wider, densely covered with minute projections, placed close together with the base not visible; LoL 2 is wrinkled does not present projections. In dorsal view, the LoD are elongated, rounded and do not cover LoL1 ( Fig. 10A, B, C View FIGURE 10 ). 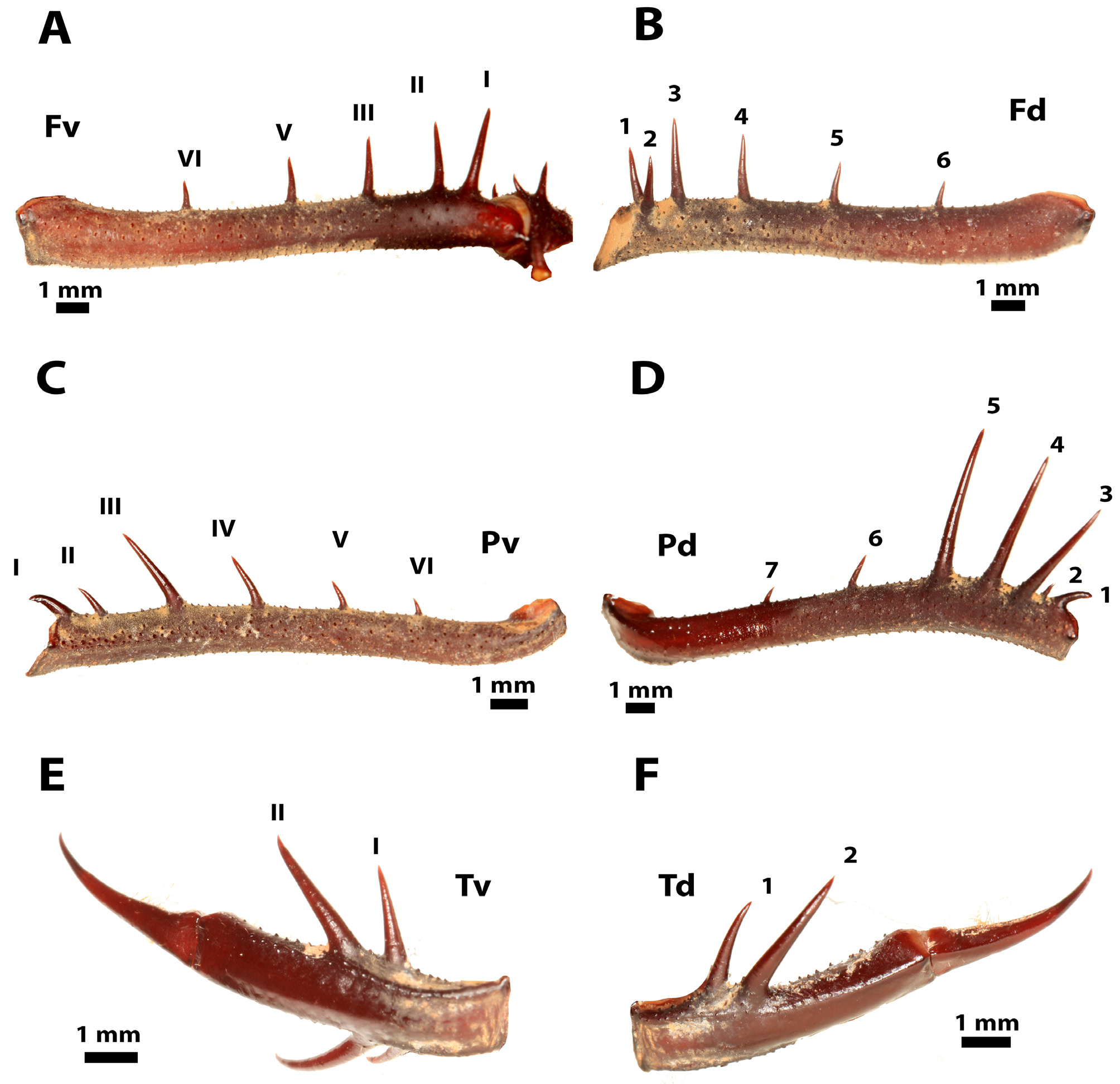 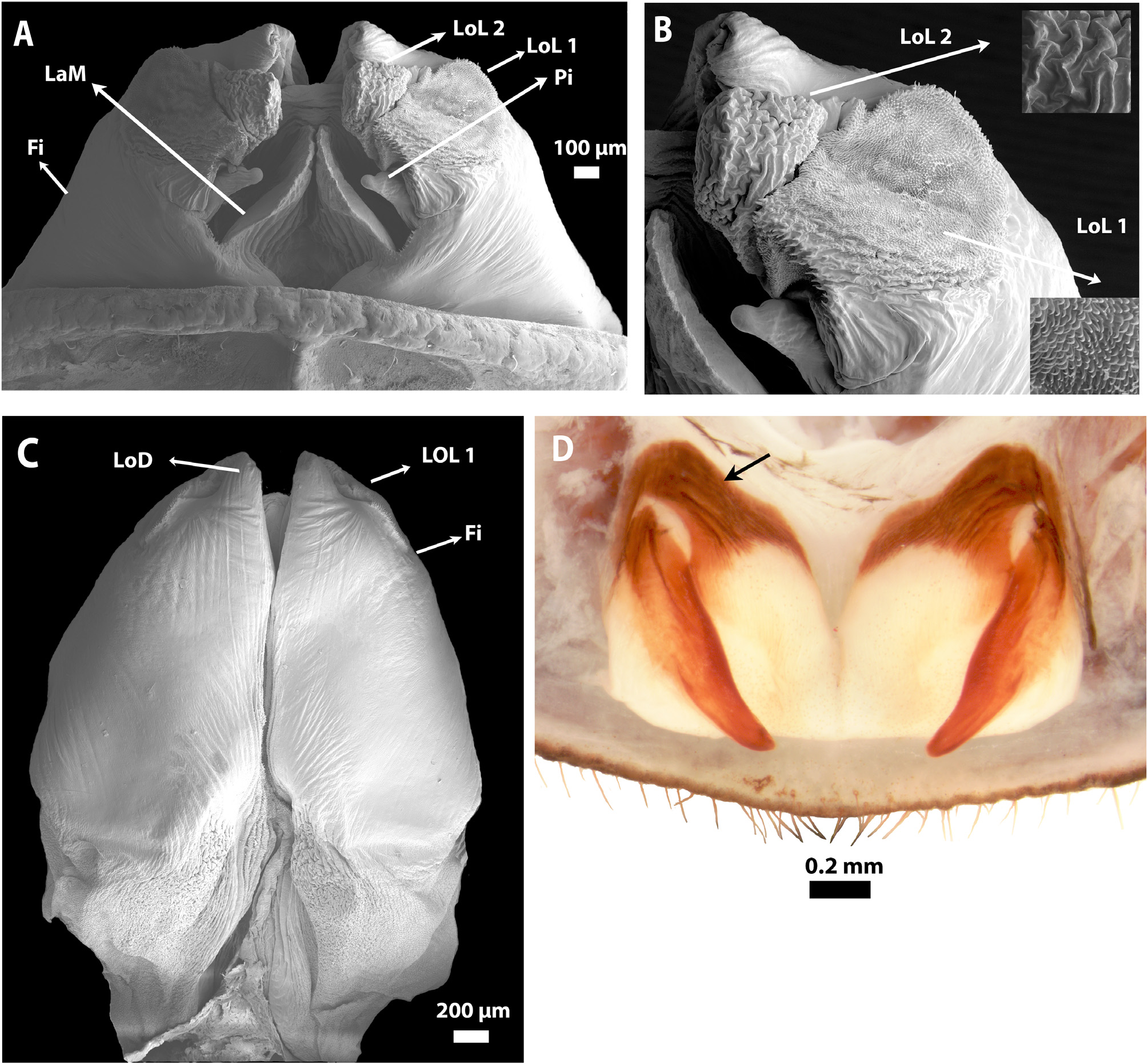