Etymology: This species is dedicated to the Colombian native community Awá (Kwaiker or Awa-Kwaiker), which inhabit between the boundaries of Colombia and Ecuador, and some they settle in the type locality (Nariño). We consider that this species deserves to be considered as part of his natural richness. Name in apposition.

Diagnosis. Heterophrynus awa   sp. nov. can be differentiated from other species by present the following characters together: four teeth in the ectal portion of the basal segment of the chelicerae. Five long spines in the ventral femur, spine FIII is smaller than FII and FV, FIV is small, presents a small spine PVI.

Female genitalia with gonopod sclerites elongated and with laminar shape, a medial portion wider than the basal and distal portion, distal portion thick and with a rounded apex. Seminal receptacles oval with a sclerotized area at the base ( Fig. 16D View FIGURE 16 ).

Similar species: This species is similar to H. alces   but it presents a small spine TIII and T3, which is absent in H. awa   sp. nov. and the female genitalia is completely different, presenting the sclerites of the gonopods with a rounded shape. The species H. armiger   is very similar, however, it presents female genitalia with sclerites not widened at the medial portion, and with an acuminated apex ( Fig. 6D View FIGURE 6 ).

Sternum. Tri-segmented, segments are well sclerotized, the area around segments is also sclerotized. Tritosternum projected anteriorly, elongated, conical, with more than 10 setae in the basal region, five in the medial region three in distal region and two more in the apex.

Abdomen. Oblong, color brown, with soft punctuations, and darker areas in the medial area of the sclerites. Carapace wider than the Abdomen ( Fig. 14C View FIGURE 14 ).

Chelicera. Presents a mesal row of three teeth on the basal segment of the chelicerae with the first in the proximal region, with two cuspids, follow by one tooth shorter in the medial portion, and the third bigger than others placed in the distal region ( Fig. 14D View FIGURE 14 ). The ectal row of the basal segment of the chelicerae have four conspicuous teeth, two with acuminated apex placed in the proximal and medial portions (tooth 1 and 2), and two with acuminated apex placed on the medial portion (tooth 3 and 4) ( Fig. 14F View FIGURE 14 ). Mobile finger of the chelicerae with five teeth.

Variation. Variation in measures and segments of the basitibia IV, Tibia I and tarsus I, are provided in Table 5.

Male. Observed Males were bigger than females ( Table 5). Spination pattern same as females. Genital operculum has an oval posterior margin, expanded to the third segment of the opisthosoma.

Male genitalia. (ICN-Am-108): LaM longer than Pi. LoL 1 longer than LoL 2, LoL 1 is wider, densely covered with minute projections, placed close together with the base not visible; LoL 2 is wrinkled and does not present projections. In dorsal view, the LoD are, long, rounded and do not cover LoL1 and LoL 2 ( Fig. 16A, B, C View FIGURE 16 ). 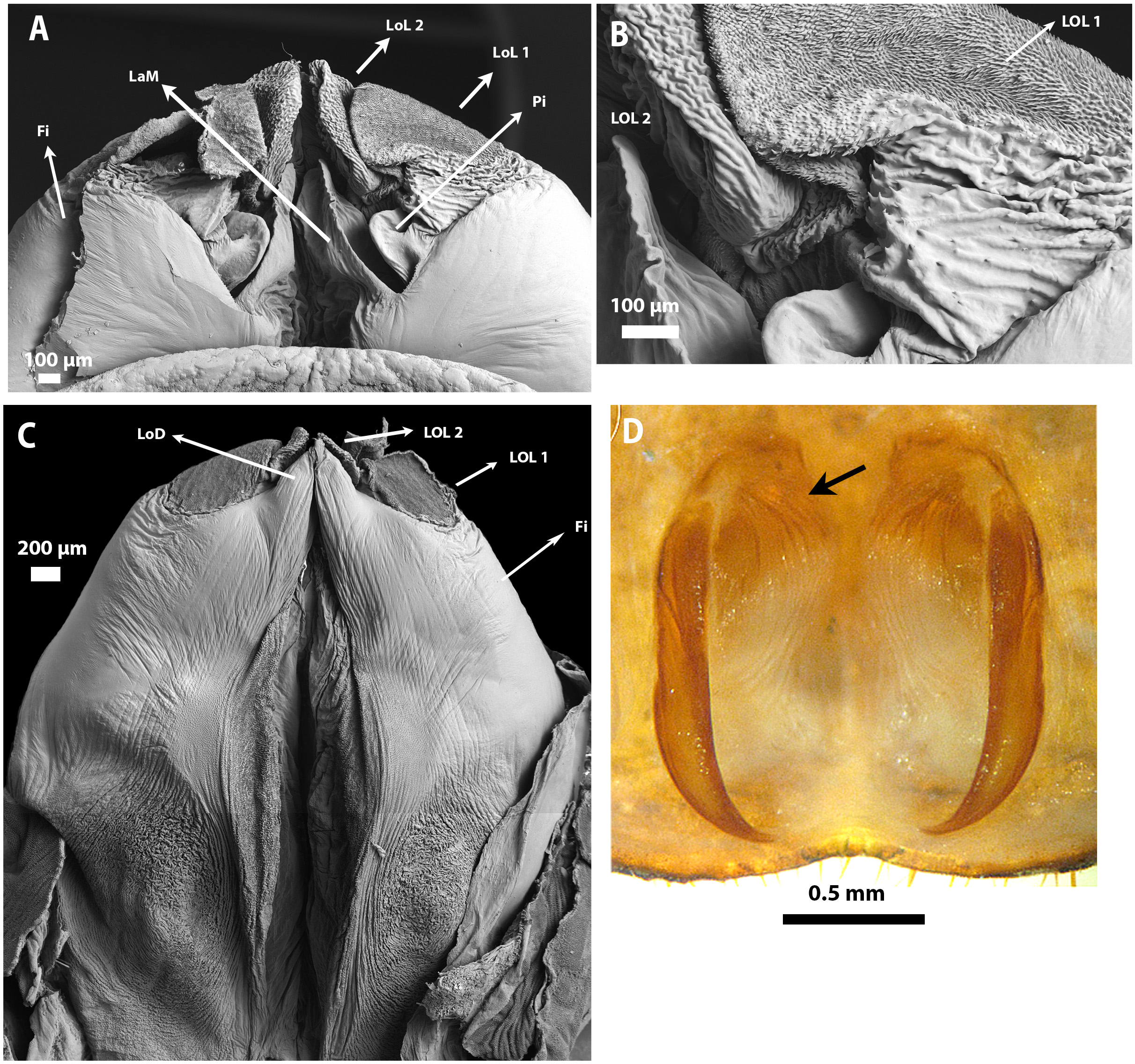