Status of Tiliqua maculata Gray, 1839  , and designation of a lectotype

Gray (1839) described Tiliqua maculata  from Demerara, Guyana. Since its original description, various authors ( Boulenger 1887, Travassos 1946, 1948) considered it as synonymous with Trachylepis atlantica  . Recently, Mausfeld & Vrcibradic (2002) examined two syntypes (NHM 1946.8.18.5– 6) and strongly suspected that T. maculata  is a species distinct from T. atlantica  . Comparing the two species, they noted differences in number of dorsal keels, midbody scales, dorsals, ventrals and subdigital lamellae under Finger IV and Toe IV. These authors also concluded that, “ the type locality of maculata  should be considered dubious ” as “ some other specimens of lizards and snakes from ‘Demerara’ collected by Capt. Sabine turned out to be restricted to certain Caribbean islands such as St. Kitts and Nevis and Santa Lucia (Underwood 1993), ” and, consequently, “ it is likely that the type locality of maculata  is St. Lucia or Barbados. ” These author also speculated that T. maculata  might be synonymous with Mabuya falconensis  .

When Travassos (1948: 206) reconsidered the status of Gray’s names, he designated a lectotype of Tiliqua punctata  . Regrettably, this author did not reference the specimen by its museum number stating only, « aproveito a oportunidade para designar o exemplar macho, com 16,5 mm depositado no Museu Británico como lectótipo […]». This imprecise text misled some subsequent authors such as Bauer (2003) to conclude that a lectotype of T. maculata  had been chosen. The measurement Travassos (1948) used to reference the specimen is its head length as indicated in the table he presents on page 207. The head measurement corresponds to the larger syntype; thus Travassos (1948) designate NHM 1946.8.27.47 as the lectotype of Tiliqua punctata Gray. He  did not designate a lectotype of T. maculata  , which he considered synonymous with T. punctata  .

During this study, we examined two of the three types of Tiliqua maculata  : NHM 1946.8.18.6 (one of the two NHM types examined by Mausfeld & Vrcibradic, 2002) and MNHN 2932 (a third type housed at the MNHN) and compared them to Trachylepis atlantica  , Mabuya falconensis  , and various species of Mabuya  from the Caribbean (Appendix II). Both specimens are in a very poor state of preservation, a fact noted by Boulenger (1887). Fortunately, Bocourt (1879) illustrated and redescribed MNHN 2932 ( Fig. 7View FIGURE 7). For this reason, it seems appropriate to designate this specimen as the lectotype of Tiliqua maculata Gray  , even if it is in a very poor state. The lecotype has 7 supralabials, the fifth below the eye, 15 / 15 lamellae under the fourth finger, 20 / 20 lamellae under the fourth toe, 37 ventrals, 58 dorsals, 32 scales around midbody, a pair of primary nuchals (secondary nuchals absent), and 5 / 5 supraciliaries. To avoid damaging this delicate specimen, we did not measure it, however Brygoo (1985) reported that it has a SVL of 219 mm and an incomplete tail, 125 mm.

Although number of dorsals at midbody falls within the range of Mabuya  , Gray’s species has auricular lobules and heavily keeled dorsals. Contact between the third supraocular and frontal also excludes Tiliqua maculata  from Mabuya  . In the types, these scales narrowly contact one another ( Fig. 6View FIGURE 6 e, f), whereas they never contact one another in Mabuya  . On the other hand, this suite of characters allies Gray’s species with the Afro-Malagasy radiation and we formally transfer it to Trachylepis  as Trachylepis maculata (Gray)  new combination. This same suite of characters serves to distinguish T. maculata  from Mabuya falconensis  and its congeners from both the Caribbean and mainland Neotropics. We agree completely with Mausfeld & Vrcibradic (2002) that T. maculata  is a species distinct from T. atlantica  . However, we do not know if it is synonymous with a species from the Afro-Malagasy region or if it actually once occurred in Guyana. We often think of exotic species as a 20–21 st century problem. It is certainly possible that T. maculata  was accidentally introduced to the port of Demerara during the transatlantic slave trade period and has since gone extinct. Both Bocourt (1879: 412) and Duméril (Duméril & Duméril 1851) argued that T. maculata  is most similar to the African species T. perrotettii  : « Nous trouvons parfaitement juste l’appréciation suivante donnée par M. Aug. Duméril (Cat. Méth. 1851, p. 159): « C’est avec l’Euprépis de Perrottet, originaire de la côte occidentale d’Afrique, que cette espèce a le plus de rapport par l’ensemble de ses caractères » ( Bocourt 1879). 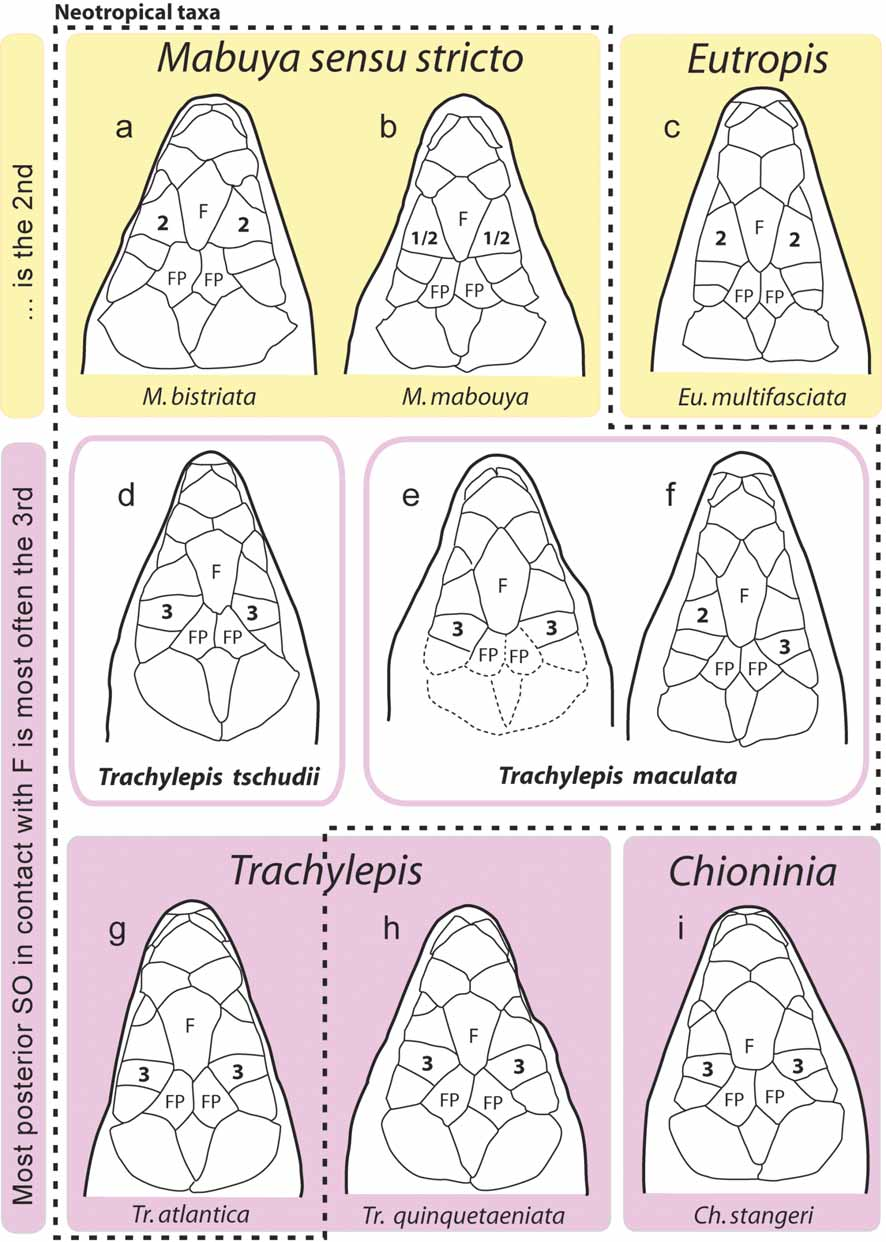 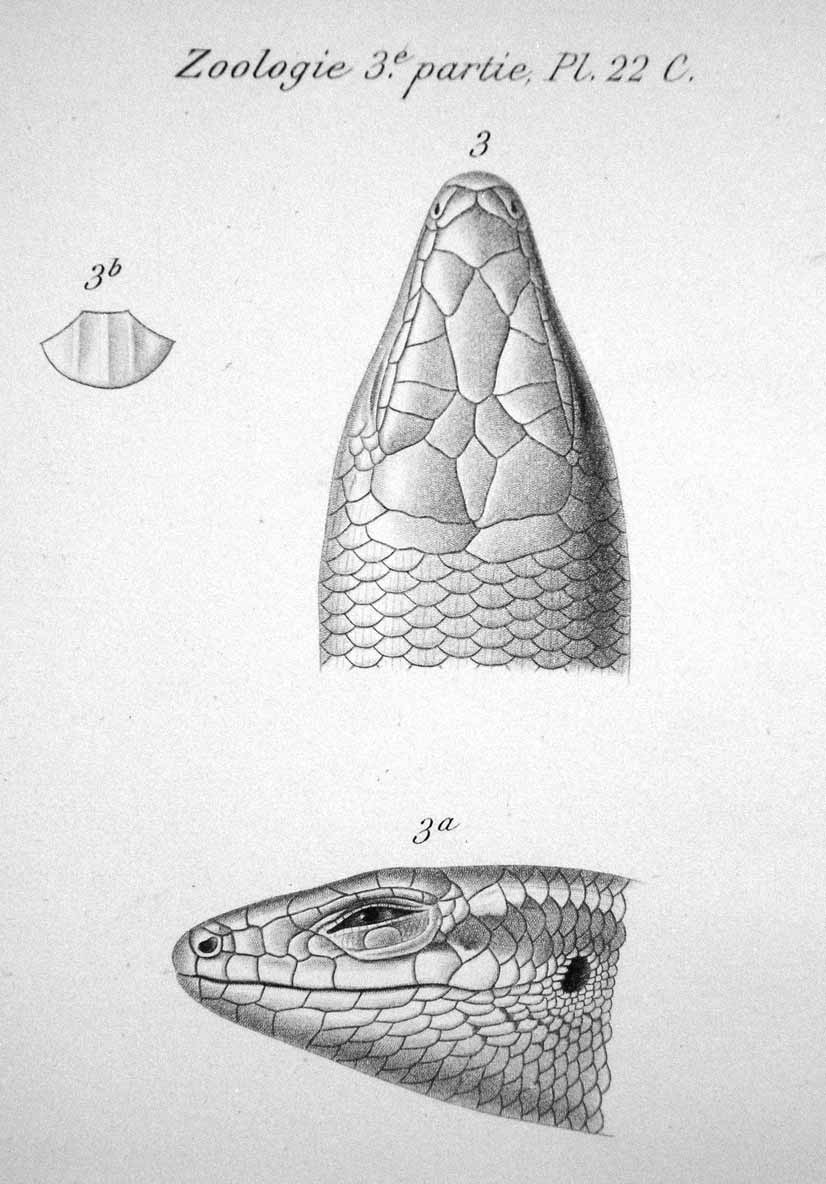