Ebenacobius costalis gen. et comb. nov. can be distinguished from other species of the genus by the combination of basal ⅓ of first stria with a single row of at least slightly misaligned punctures ( Fig. 1E View Fig ) and by the rostrum moderately downcurved and only slightly longer than prothorax (1.1 ×) in lateral view ( Fig. 4I View Fig ).

PROTHORAX. Wider than long (W:L ratio: 1.3), widest near base, narrower there than elytra at humeral angles; sides subparallel in basal ¾, slightly and regularly converging apicad; apical constriction as long as width of funicle at apex; integument densely punctate, space between punctures smooth and shiny, narrower than or equal to diameter of punctures; setae in each puncture very short, recumbent, not exceeding in length the diameter of punctures; prosternal process reduced forming a small tubercle between the procoxae.

Females can be distinguished from males by their rostrum which is narrower and distinctly longer, 1.3 × longer than prothorax in lateral view (1.1 in ♂♂).

In the collection housed at NHRS, a male specimen with the labels “Cap. B. Spei.” and “Drège” and corresponding to the description of Derelomus costalis in all respects was located. This specimen is the unique individual available and the description does not refer to a specific holotype, it is therefore here designated as the lectotype of Derelomus costalis Fåhraeus, 1844 and was labeled accordingly. In the collections housed at SAMC, a male specimen with the labels “Mfongosi; Zululand” and “ Derelomus ; rugosicollis ; Types; Hesse [hand written]” was identified. The description only refers to an undetermined number of males and females forming the type series. In the absence of a specific holotype designated for this species, the male specimen reported above is here designated as the lectotype for Derelomus rugosicollis Hesse, 1929 and was labeled accordingly.A detailed examination of the external and internal morphology of this specimen revealed no differences with the lectotype of Derelomus costalis . The name Derelomus rugosicollis is therefore a junior synonym of Derelomus costalis . It should be noted that the lectotypes of both D. costalis and D. rugosicollis are young ill-sclerotized specimens and that their uniformly pale colour is not representative of the colour pattern of the species. A redescription of this species is provided to account for the patterns found on fully sclerotized specimens of this species. In some specimens from the western Cape and Kwazulu-Natal Provinces of the Republic of South Africa, striae 9 are not erased in basal 1/6, but subcontiguous or merged with striae of 10.

The host plant of E. costalis gen. et comb. nov. is unknown, adults have been sporadically collected on flowers of Asteraceae and Fabaceae , which are probably only used as shelters by this species. Adults were collected in February, July, October, November and December. 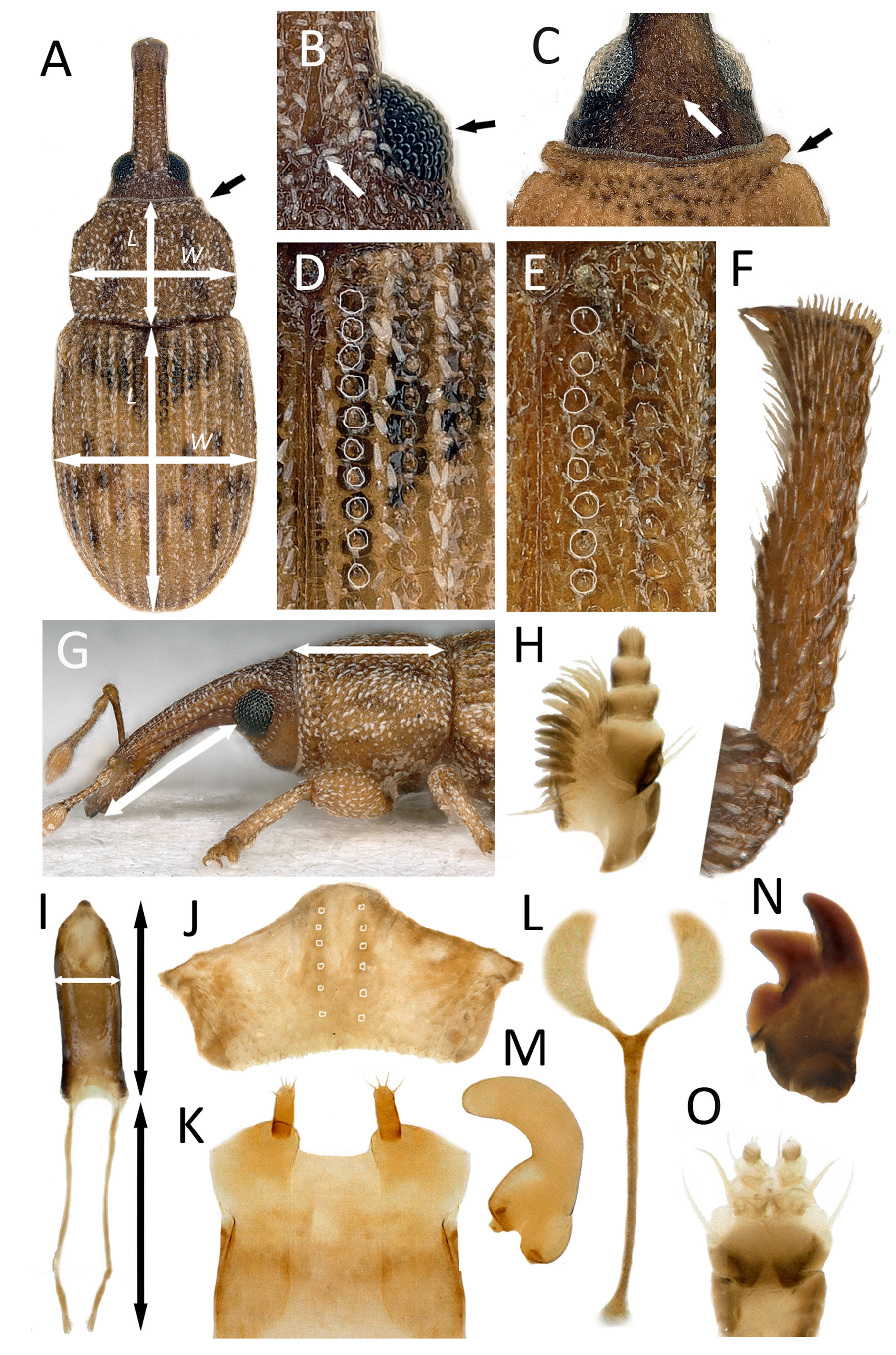 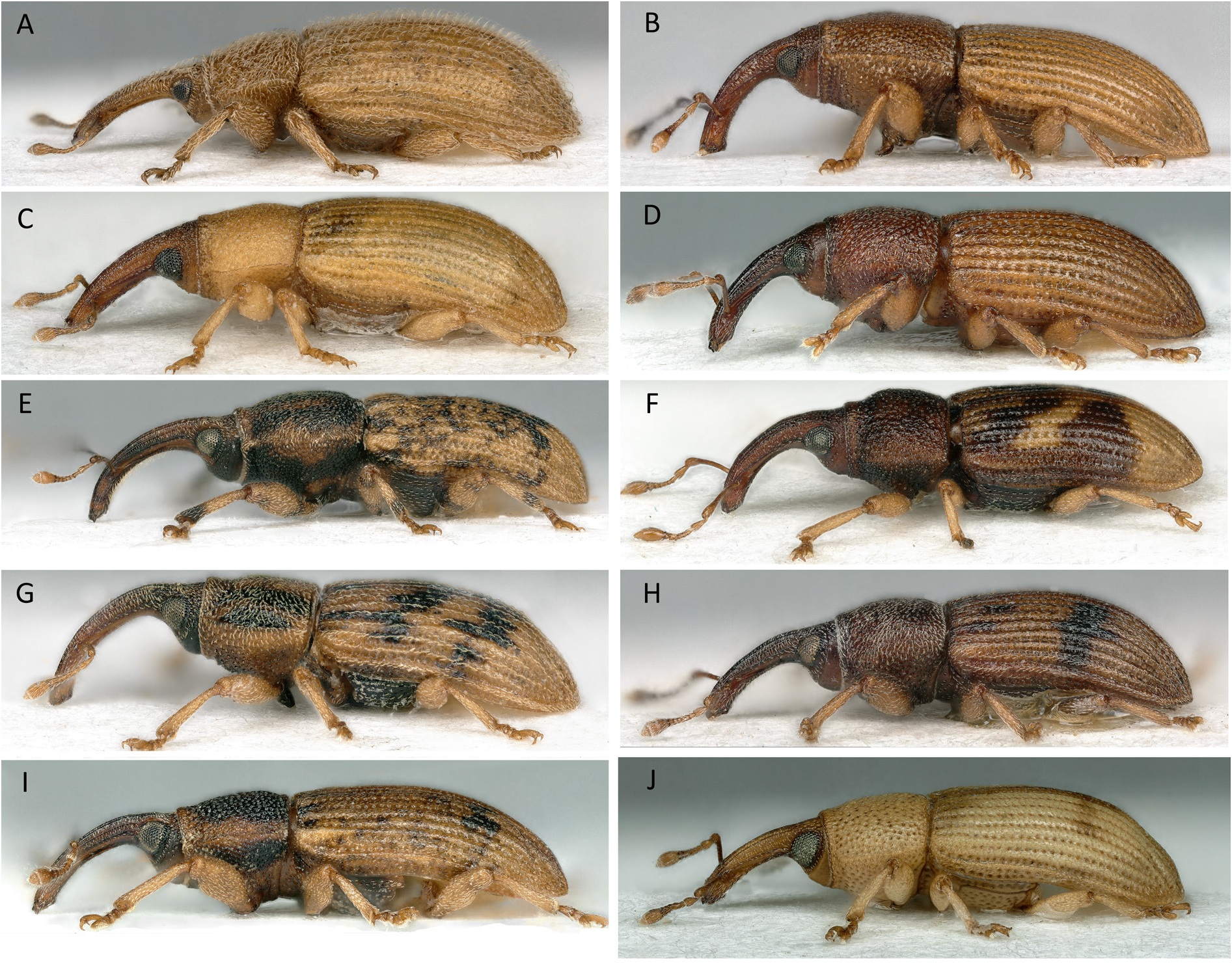